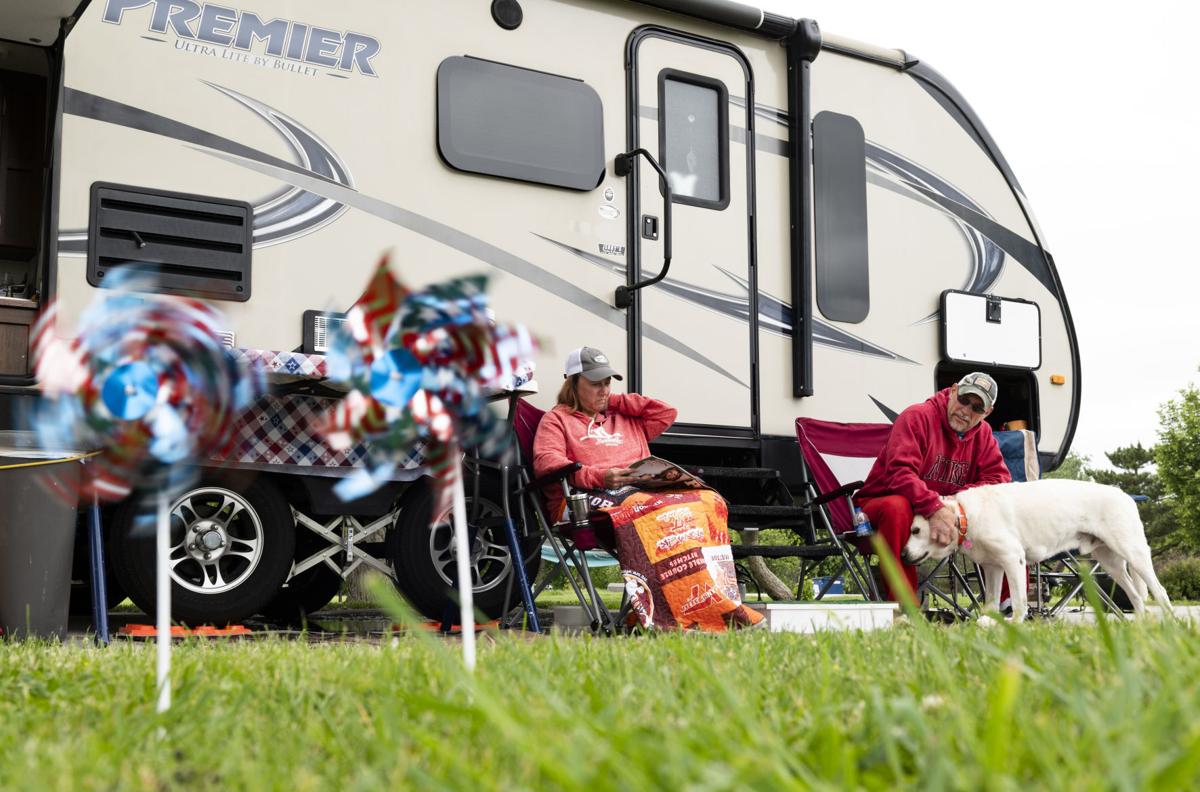 Cynde and Brian Hoefener of Omaha sit outside their camper with their dog, Gunner, on Thursday at Branched Oak State Recreation Area. 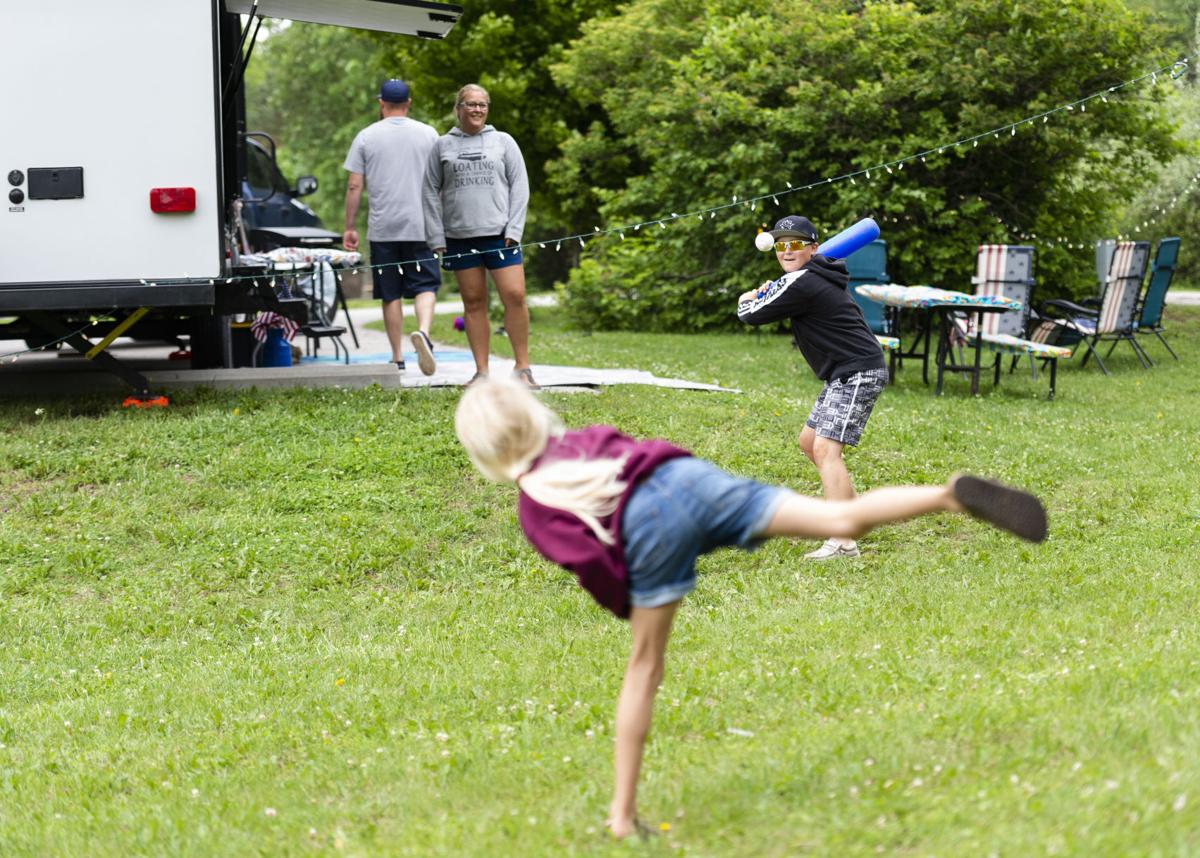 Zoe Ritz, 7, pitches a ball to her brother Wyatt, 13, while their parents Tyson and Kristin set up for Memorial Day weekend Thursday at Branched Oak State Recreation Area. 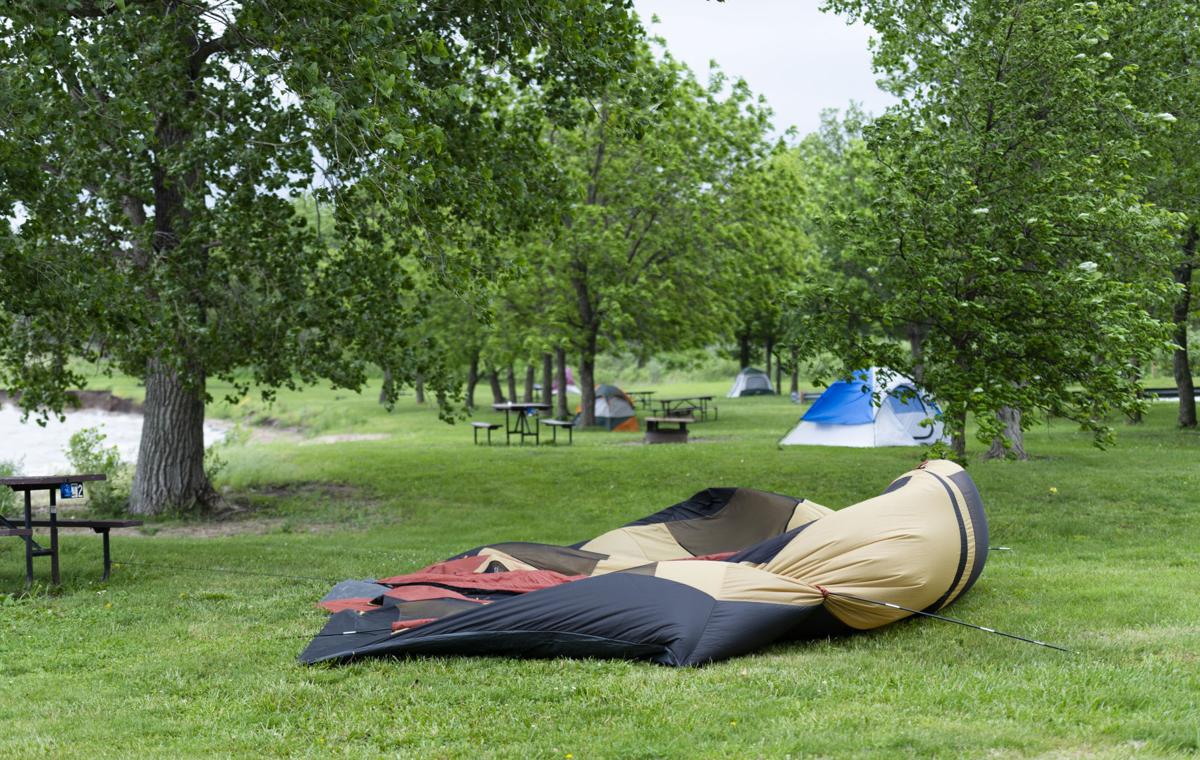 Tents blow in the heavy winds on the shore of Branched Oak Lake on Thursday in advance of the Memorial Day weekend. 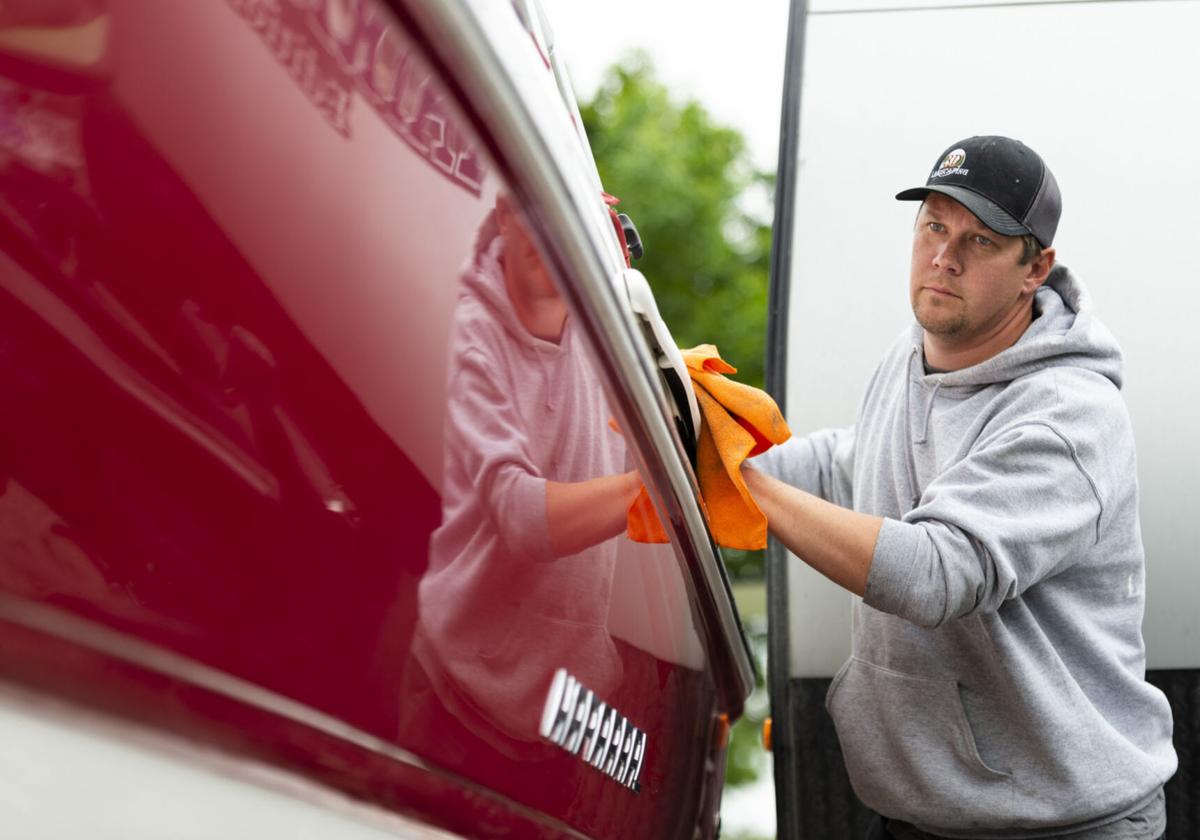 Ty Alcorn of Lincoln waxes his boat in hopes of boating weather over Memorial Day weekend on Thursday at the Branched Oak State Recreation Area. 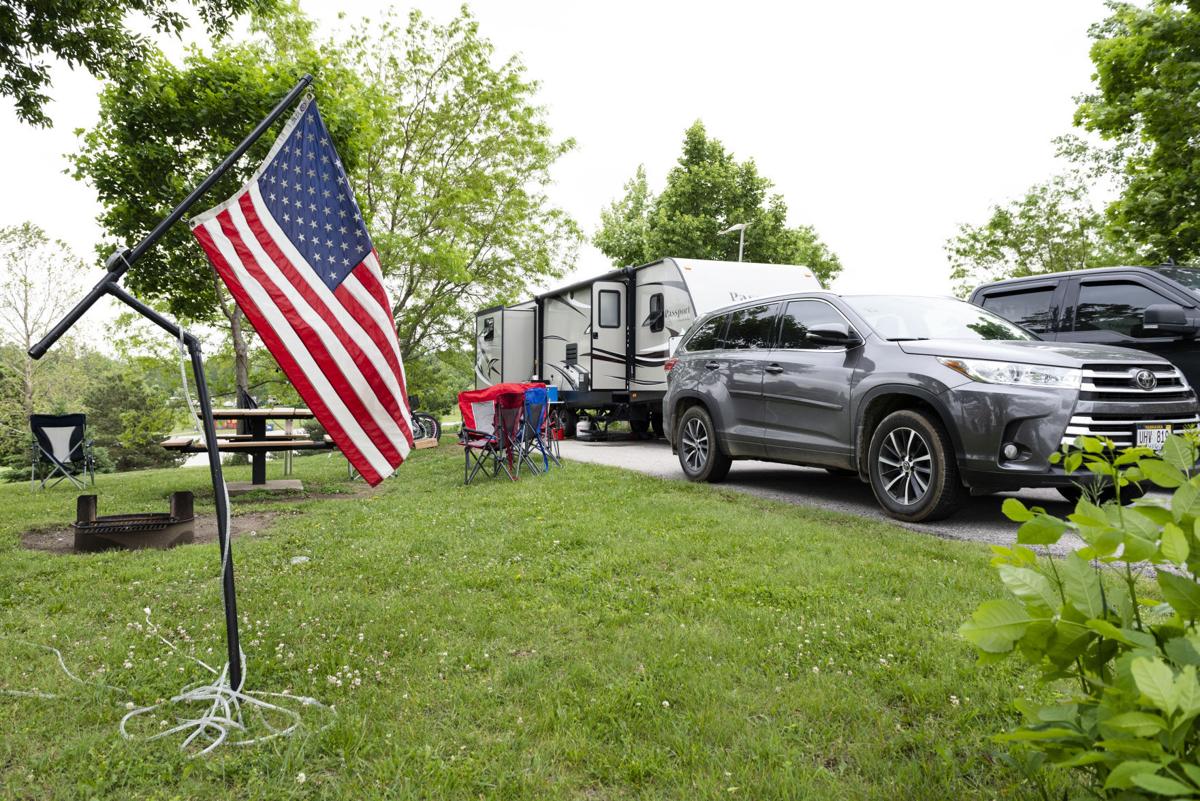 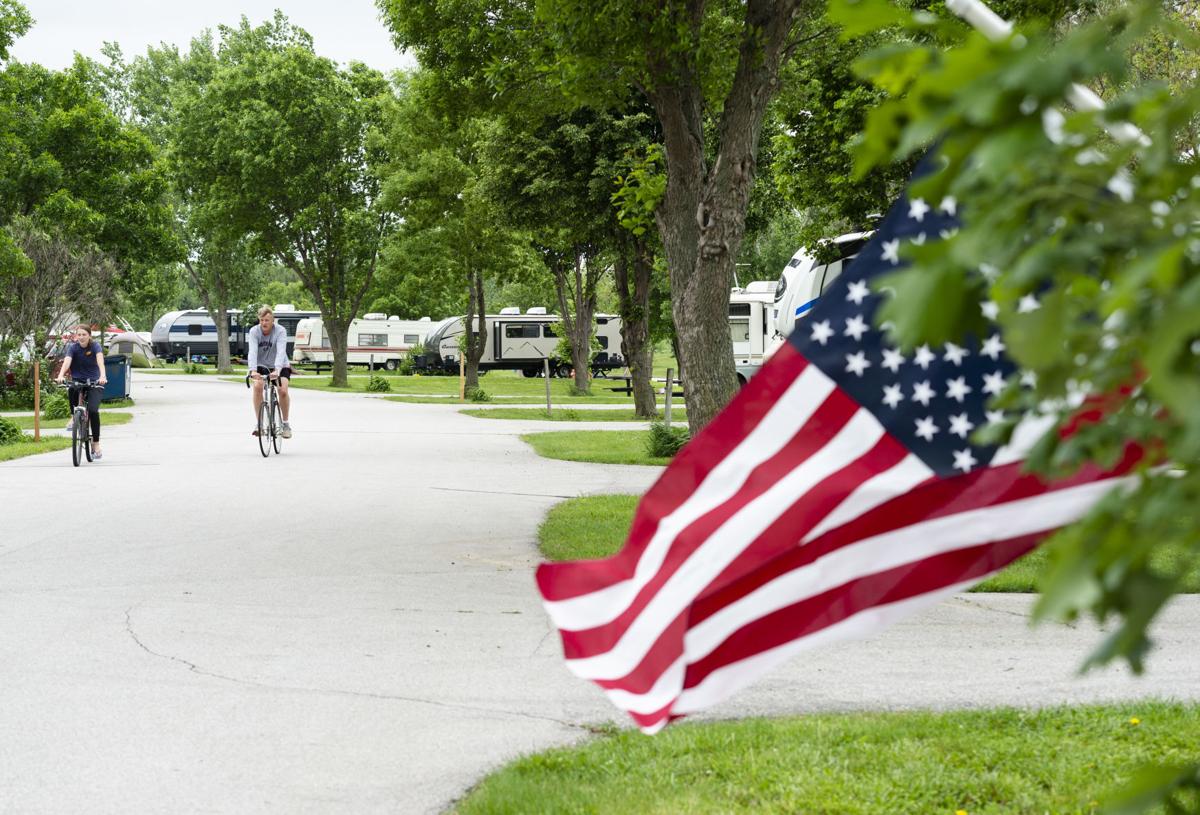 Nebraskans are about to celebrate their first relatively normal Memorial Day in two years, but Mother Nature — and gas prices — threaten to put a damper on it.

AAA expects 37 million people nationally to travel at least 50 miles this weekend, up 60% from last year. Those who do so by automobile will face the highest Memorial Day gas prices in seven years.

As of Thursday, the average price of gas nationally was $3.04 a gallon, the highest it’s been at this time of year since 2014.

The average locally is lower, at $2.95 in Lincoln and $2.91 statewide, but those also are the highest prices since 2014. They’re also more than $1 more per gallon than they were last year at this time.

“With the increase in travel demand, gas prices are going to be expensive no matter where you fill up, so plan ahead,” said AAA spokeswoman Jeanette McGee.

For those hopping on a plane, there now is an additional option at the Lincoln Airport. Delta Air Lines brought back its flight to Minneapolis on Wednesday, after taking it off the schedule last July because of the drop in air travel because of the coronavirus pandemic.

All Lincoln pools to open this summer, with reduced hours

Airport Executive Director David Haring said passenger interest in the restarted flight “is even better than we anticipated.”

And people who are flying out of Lincoln for the Memorial Day weekend are seeing more competitive prices, with Haring reporting that 91% of round-trip fares on United Airlines and 56% of fares on Delta Air Lines are within $100 of fares for the same flights out of Omaha.

For those staying closer to home, city pools are scheduled to open on time for the first time in three years. COVID-19 delayed their opening last year, and cool weather delayed the opening in 2019.

Lincoln is set to have much-cooler-than normal temperatures this weekend, with highs forecast to be only in the 60s, which would make it the coolest Memorial Day weekend since the mid-1990s, but Holly Lewis, assistant director of the Parks and Recreation Department, said pools will open as scheduled at 1 p.m. Saturday. Swim time could be short-lived, however.

Lewis said the pools could close for the day at 3 p.m. if the air temperature doesn’t reach at least 70 degrees.

“We will open at 1 p.m. to sell season passes, take pool rental requests, register for swim/dive team and swim lessons even if the weather is not favorable for swimming,” she said in an email.

Lewis said decisions on whether to open Sunday and Monday will be based on weather conditions.

The weather is not likely to put a damper on crowds at state parks, said Jim Swenson, parks administrator for the Nebraska Game and Parks Commission.

Swenson said reserved campground sites are pretty much full at most parks and he expects the first-come, first-served sites to fill up quickly as well.

While the cool, damp weather may cut down on the time people spend out on the lakes, it won’t discourage them from going camping, he said.

What’s Going On: Alice in Wonderland, Riff Raff and pirates and Disney on Ice

“They just find alternate things to do.”

There’s plenty going on in Lincoln this weekend, perhaps.

The Haymarket likely will be crowded, with its weekly farmers market Saturday, Husker baseball games at noon Friday, Saturday and Sunday, Lincoln Saltdogs games each night and Lincoln Public Schools graduation ceremonies at Pinnacle Bank Arena on Friday night and throughout the day Saturday and Sunday.

Also taking place through Saturday are the men’s wrestling under-23 National Championships at the Devaney Sports Center.

Jacob Collier Jacob Collier is coming to The Truman this Thursday night. This event has been rescheduled from May 2020, and resellers seemed to have marked up ticket prices quite a bit. But trust … END_OF_DOCUMENT_TOKEN_TO_BE_REPLACED

Posted on May 19, 2022 The City of Overland Park welcomes a new Human Resources Department leader, following a national search. Thomas Bledsoe comes to the City from … END_OF_DOCUMENT_TOKEN_TO_BE_REPLACED

Food from the upcoming Westport Korean restaurant Chingu/Photo by Alyssa Broadu Chingu, a new Westport spot from the team behind Sura eats, will combine Korean street food and soju … END_OF_DOCUMENT_TOKEN_TO_BE_REPLACED