Raging wildfires continued to blaze across the western U.S. on Wednesday, menacing homes and forcing evacuations.

In the Pacific Northwest, the flames have threatened American Indian tribal lands already affected by a historic regional drought.

Nearly 70 active fires have burned more than a million acres – a worrying tally for this early in the 2021 fire season.

Additionally, the National Interagency Fire Center said Wednesday that almost 34,000 fires had burned more than 2 million acres across the country since January.

Heat waves that have swept the West have not helped aid the efforts of the 16,600-plus firefighters and support personnel in attacking the fires.

While the ongoing heat is expected to abate across the Southwest, the National Weather Service (NWS) said Wednesday that “noteworthy positive anomalies” would still exist over inland portions of the Pacific Northwest and Great Basin through Thursday and elevated-to-critical fire weather would persist there.

Oregon’s week-old Bootleg Fire – which has destroyed at least 20 homes in lands near the California border – has doubled in size every day, spreading to an area larger than New York City. 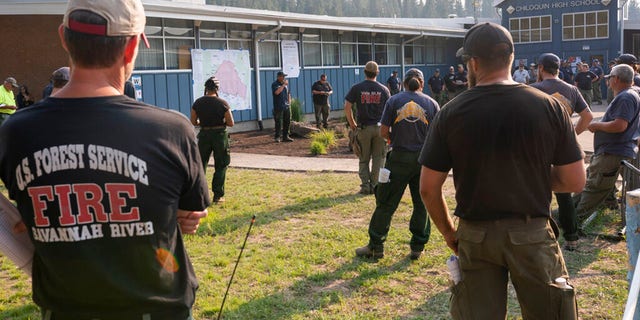 Firefighters from Oregon and other nationwide agencies meet at Chiloquin High School before heading toward the Bootleg Fire, Tuesday, July 13, 2021, in Chiloquin, Ore. (AP Photo/Nathan Howard)

“As you go out there today — adjust your reality,” incident commander Al Lawson told firefighters on Tuesday. “We have not seen a fire move like this, in these conditions, this early in the year. Expect the fire to do things that you have not seen before.”

To the south, California has made progress on the Beckwourth Complex, reporting that the lightning-ignited fires were almost 50% contained.

Several fires also burned in north-central Washington state, prompting an evacuation order for the small town of Nespelem and about 60 lightning strikes were reported nearby on Monday. 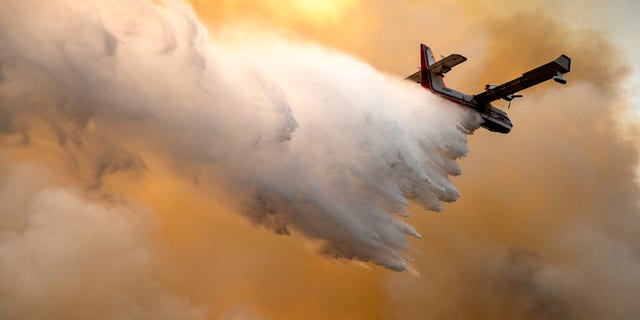 A scoop plane drops water onto a burning ridge where a fire line had been created by crews of wildland firefighters, Monday, July 12, 2021, at the Lick Creek Fire, south of Asotin, Wash. (Pete Caster/Lewiston Tribune via AP)

The demand for jet fuel plummeted amid the COVID-19 pandemic and has yet to bounce back even as more Americans get vaccinated and state and local economies reopen.

It is not yet clear if jet fuel supplies and delivery systems could be strengthened in time to help, and many smaller airports rely on jet fuel delivery by truck. 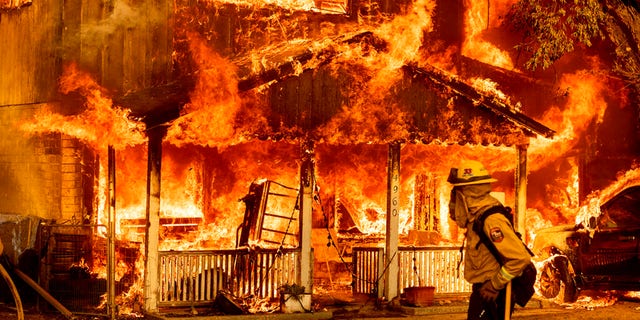 Fire consumes a home as the Sugar Fire, part of the Beckwourth Complex Fire, tears through Doyle, Calif., on Saturday, July 10, 2021. Pushed by heavy winds, the fire came out of the hills and destroyed multiple residences in central Doyle. (AP Photo/Noah Berger)

Govs. Kate Brown of Oregon and Brad Little of Idaho have already issued emergency orders in response to these fires – fearing the worst as critical reservoirs and water sources remain scarily dry.

According to the U.S. Drought Monitor, more than 93% of the West is impacted by moderate to exceptional drought.

Scientists say that worsened and extreme conditions are a result of a combination of human-caused climate change and unusually random, short-term and natural weather patterns, predicting that the West will only become hotter and more arid in the future.

However, while this warming was contributed to the West’s “megadrought,” special studies are needed to determine its impact on a single extreme weather event.

The Associated Press contributed to this report.

Kansas City Restaurant Week is entering its final stretch, with special menus available this weekend and then gone for a year. Restaurant Week deals are, as always, great: For $15, $35 or $45, … END_OF_DOCUMENT_TOKEN_TO_BE_REPLACED

Photo by Strangelabz LLC Since 2019, keyboardist Vincent Orsolini and drummer Tyree Johnson have led the local jazz fusion band Everyday Strangers. They are among a group of … END_OF_DOCUMENT_TOKEN_TO_BE_REPLACED

Our story with the most engagement since our last issue—and, indeed, for all of 2021—was the war of words between Crossroads cocktail spot SoT and Patrick Mahomes’ controversial kid brother. The … END_OF_DOCUMENT_TOKEN_TO_BE_REPLACED

Chiefs-Bills Both KC and Buffalo dominated their opponents in the first round of the playoffs, blowing out Pittsburgh and New England respectively. Now, the top two young quarterbacks in the … END_OF_DOCUMENT_TOKEN_TO_BE_REPLACED

Jared Wolfe’s original plan was to call his barbecue pit Lone Wolfe. That, he quickly came to feel, would be living a lie. “I didn’t feel like it was a good fit, to be honest,” he says. “I … END_OF_DOCUMENT_TOKEN_TO_BE_REPLACED