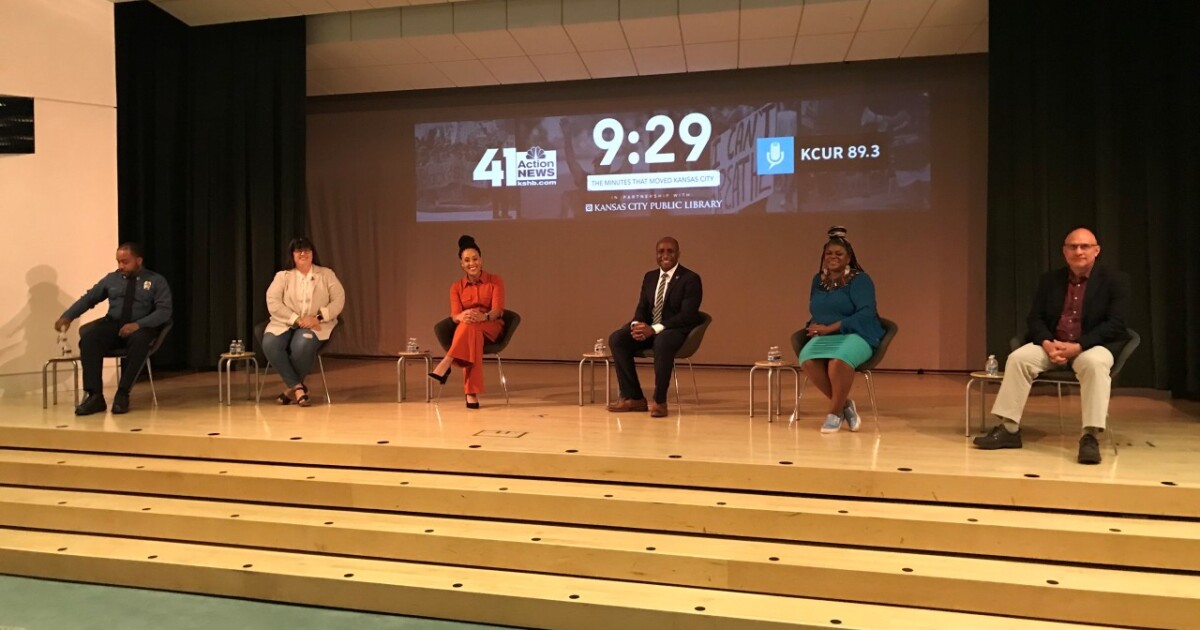 One year after George Floyd’s murder, KCUR 89.3 and 41 Action News wanted to see the impact of his death in Kansas City, Missouri.

In 2020, hundreds of Kansas Citians gathered at the Mill Creek Park near the Country Club Plaza to protest following Floyd’s murder.

On Tuesday evening, the Kansas City Public Library hosted a town hall, led by 41 Action News anchor Dia Wall, to revisit some of the people affected by the protests.

To start, Wall asked each panelist to take her back to how they felt during the protests and after watching the video of Floyd’s death.

Both Blakemore and Huff said they could not help but look at it through the lens of a mother.

“I think because I’m a mom, and because I have two grown sons, I think the thought of being that (Floyd’s) mom, it was more than I could really let myself go into,” Huff said.

For Lucas and Hughley, they said their titles of “mayor” and “police captain” weren’t important. Rather, their empathy came from the perspective of being Black men.

“When I saw the murder of George Floyd, I processed it as man, as a Black man, and in many ways wanted to have that experience uniquely,” Lucas said. “Not as mayor, not as person who is working with the police.”

For Moreno, being a seasoned journalist who has covered protests before couldn’t have prepared him for what he witnessed last summer.

“To see a protest on this scale was amazing,” Moreno said. “It was a totally different experience than something I’ve done before, and it was a learning experience.”

The conversation ended with Wall asking the panelists what the future looks like and what should be done to ensure that protests like those for Floyd aren’t necessary again.

For Moreno, it’ll be coming together as a community and using the experiencing of the protest to continue conversations.

“We have all shared this pandemic, the arrest and death of George Floyd and others,” Moreno said, “and we all shared that experience. We’re going to be able to process it and reflect on it as we move forward.”

Blakemore said it starts with people knowing their self worth.

“When you know your worth, when you know that you are worthy of having all that you want in your life, you’re going to speak louder and stand taller and you’re not going to allow things to happen to you any longer that you don’t deserve,” she said.

The protests, according to Lucas, were proof that things can, and have started to, change.

“I think now you are seeing folks see that change, you are seeing that opportunity and I think that is ultimately a positive for us going forward,” Lucas said.

Huff said she would continue using what she learned in 2020 to remain engaged in these issues and conversations.

“I want to continue to give myself away until I feel like, you know, that I’ve done something to make change,” Huff said.

When dealing with situations like this, Hughley said, he plans to approach them as a human who cares in addition to the perspective of an officer.

“Be genuine, be authentic,” he said. “So when you go to your office tomorrow, go to your board rooms, your business meetings, stand up and look around the room and see who’s not there and then figure out why and fix it. Be deliberate, be intentional and be genuine.”

This story is part of 9:29 — The Minutes That Moved Kansas City, a KCUR 89.3 and 41 Action News collaboration about the legacy of George Floyd.

Jared Wolfe’s original plan was to call his barbecue pit Lone Wolfe. That, he quickly came to feel, would be living a lie. “I didn’t feel like it was a good fit, to be honest,” he says. “I … END_OF_DOCUMENT_TOKEN_TO_BE_REPLACED

Posted on January 18, 2022 The City of Overland Park will begin an engagement phase of a new small business rescue program scheduled to launch in Spring 2022. The Overland … END_OF_DOCUMENT_TOKEN_TO_BE_REPLACED

Posted on January 13, 2022 The Overland Park Crisis Action Team has hit the ground running in 2022, and there’s already a new four-legged team member on board. The behavioral … END_OF_DOCUMENT_TOKEN_TO_BE_REPLACED