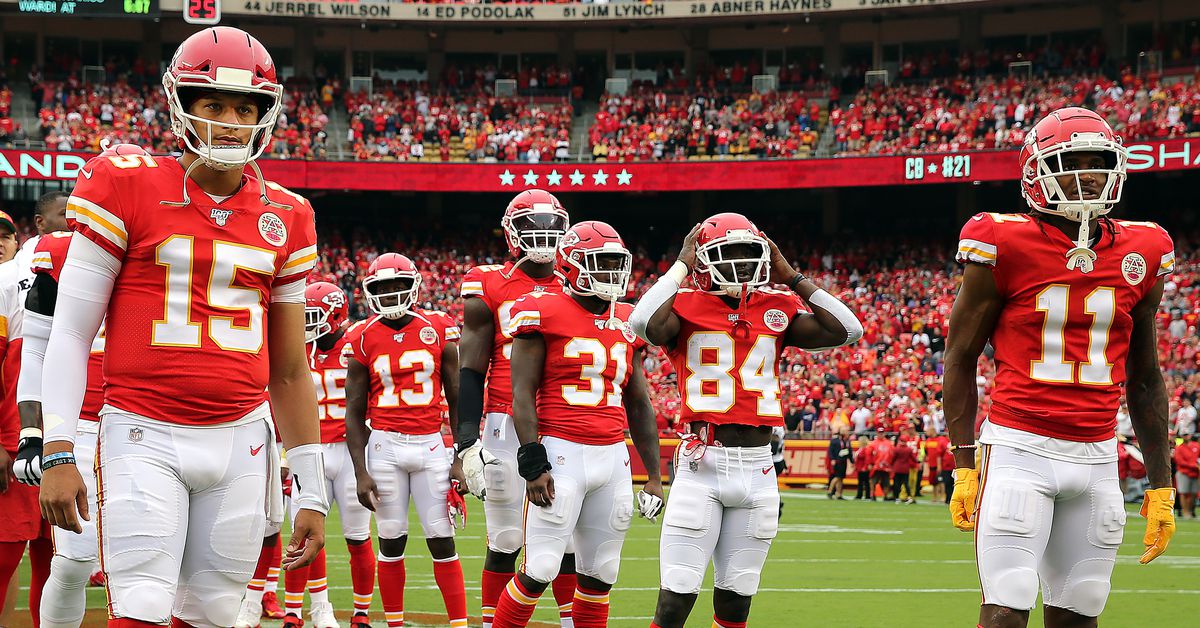 The week began with a report from ESPN’s Josina Anderson that over the weekend, Kansas City Chiefs players had been reaching out to the former Jacksonville Jaguars player, trying to get him interested in joining the team.

Fourth on the depth chart entering the 2020 season, Westbrook tore an ACL during Week 7 and finished the season on injured reserve. He is expected to be ready to play by August.

Westbrook — listed at 6 feet and 178 pounds — isn’t exactly the physical type the Chiefs are likely seeking to replace departed free agent wide receiver Sammy Watkins, but Westbook has shown himself to be able to get production on a roster crowded with other receivers, picking up 1,720 yards (and nine touchdowns) on 160 receptions during 40 games with the Jaguars.

Anderson’s report makes no claim that the Chiefs front office has been speaking with Westbrook’s representatives — but we have also learned it is wise not to ignore reports that Kansas City players are trying to get a player to join them on the Chiefs.

Tamba Hali set to retire as a Chief

We also learned that the Chiefs had signed the former star edge rusher to a one-day contract — so that the six-time Pro Bowl player could officially retire as a member of the team.

Hali, 37, spent all 12 of his NFL seasons with the Chiefs after being selected out of Penn State in the first round (20th overall) of the 2006 NFL Draft. First as a defensive end and then as an outside linebacker, Hali appeared in 177 Chiefs games (starting 157) from 2006 through 2017, accumulating 596 tackles (460 solo, 105 for loss), a pair of interceptions, 33 forced fumbles and 16 passes defensed. But his 89.5 career sacks are the second-most in franchise history, behind only Pro Football Hall of Famer Derrick Thomas.

A native of Gbanga, Liberia, Hali came to the United States with his father at the age of 10 — and decided to become a football player while attending high school in Teaneck, New Jersey. During his time in Kansas City — in which the team had a record of just 91-101 — he remained one of the team’s most reliable (and popular) players.

The Chiefs also released a video of Hali’s signing ceremony at Arrowhead Stadium.

But the Chiefs also had 2021 business on their Monday agenda. First they released tight end Sean Culkin — and then cut ties with two more edge-of-the-roster players.

Ta’amu, 23, has now been up and down several times with Kansas City after initially signing with the club in April of 2020. The Chiefs reportedly signed former SMU quarterback and undrafted free agent Shane Buechele — although they have not yet made that signing official. Quarterback Anthony Gordon is also on the roster behind Patrick Mahomes and Chad Henne.

Over the weekend, the newly-signed Chiefs offensive lineman had been engaged in a Twitter war after innocently mentioning that he was enjoying living in Kansas. John Dixon chronicled all the battles — and the truce signed on Tuesday.

Long is hardly the first member of the Chiefs to unexpectedly stumble into the Missouri-Kansas Border War (known by some partisans as the “Kansas-Missouri Border War”). One of the respondents to his original tweet noted a previous incident.

Y’all remember when we signed Tyrann and he was new to the KC area? He was so confused by fan comments. This happens every time a player mentions being in Kansas. pic.twitter.com/IRGSdkfck4

It’s hard for those from outside the area to fully understand.

With its roots in the time before the Civil War, the Border War goes back far beyond the memory of anyone now living. And it’s made worse by the remarks of poorly informed TV announcers and touring musicians who never seem to realize that the metropolitan Kansas City area is bisected by the border between two states — not to mention a certain series of college football and basketball games, along with perceptions that drivers in one state are worse than those in the other.

Wednesday was the NFL’s schedule release day. We covered the announcement of the league’s full Week 1 schedule on the morning news shows and followed up by tracking the inevitable leaks of schedule information throughout the day — right up to the release of the full 2021 schedule at 7 p.m.

The Chiefs only have seven scheduled Noon games, a reflection of having a premier quarterback in Patrick Mahomes and the continued success of two straight Super Bowl appearances. Unlike what has seemed to become typical in recent seasons, the Chiefs will play three of their final four games on the road. After a Week 13 bye week, the Chiefs’ final six games pit them against AFC teams, including four games within the AFC West. The Chiefs’ first-ever Week 18 regular-season game will be against the Denver Broncos and includes special flex scheduling for that weekend alone.

Then we gave you a rundown of the best and worst games on the schedule.

Predicting the Chiefs’ final record for the 2021 NFL season

Then on Thursday — with the new schedule in hand — Ron Kopp offered his game-by-game prognostication for the season.

This is absolutely a tough schedule for the Chiefs. They’ll play most of the legitimate AFC contenders, while also seeing two possible NFC contenders.

It won’t be easy to get to 14-3, but the players that were in Kansas City in 2020 will be highly motivated following an embarrassing Super Bowl LV loss — and the new additions will prove to be significant upgrades to the units they’re joining. Once again, this team should clearly be the top team in the AFC.

Ever since the end of the NFL draft — as in every offseason — we had been seeing reports of undrafted free agents the Chiefs had signed. As usual, not all of them were accurate. On Thursday, Kansas City released the official list.

Then the team made a deal for a veteran player.

Sports Illustrated’s Albert Breer was first with the details on the swap — with the Chiefs getting Hughes and the Vikings’ 2022 seventh-rounder in exchange for their 2022 sixth-round pick.

Hughes, 24, first entered the NFL as the 30th overall pick made by the Vikings in the first round of the 2018 NFL Draft. As a member of the Vikings over the past three seasons, Hughes appeared in 24 games with seven starts. Hughes tore his ACL after six games his rookie season and his season ended in Week 17 of 2019 due to a cracked vertebra. Hughes only played four games in 2020 before a neck injury landed him on injured reserve, though the Vikings have said that the 2019 and 2020 injuries were unrelated.

In March, Chris Tomasson of the St. Paul Pioneer Press reported that Hughes is fully healthy, though the Vikings declined to exercise his fifth-year option in early May. The Vikings added three-time first-team All-Pro cornerback Patrick Peterson this offseason.

Thursday’s moves put the Chiefs’ roster at the maximum of 90 players. So on Friday, Ron made his first prediction for the opening-day roster.

In my opinion, the first eight players listed are all in competition for starting positions. Brown and Thuney are the only ones who are locked in as starters.

First of all, you probably noticed one name missing: I believe Laurent Duvernay-Tardif will lose his starting job to Kyle Long — and I don’t think he’s returning as a reserve player. If he does lose the battle at right guard, I could see him working with the team to waive his no-trade clause and get him to a team that could use a veteran starter.

The Chiefs have initially kept nine offensive linemen each of the last four years. I think with this group, there’s even more reason to keep less than 10. The starters will be a strong group, while the backups possess the versatility to cover many different spots. Rankin’s experience as a starting guard in this system — while practicing and playing as a tackle last year — gets him on the team over Andrew Wylie and Nick Allegretti.

2021 Plaza Lighting Ceremony | Thursday, November 25 The Country Club Plaza will celebrate its Lighting Ceremony on Thanksgiving. It has been a local tradition for almost 100 years and started … END_OF_DOCUMENT_TOKEN_TO_BE_REPLACED

eep in the downtown headquarters of the Kansas City Police Department, there’s a roll of microfiche that spits out a stack of copy paper a full five inches thick. The file is marked “Roland T. Owen” … END_OF_DOCUMENT_TOKEN_TO_BE_REPLACED

When Tayanna Nelson and her husband started looking for a wedding photographer, they searched high and low for an inclusive photographer. “Everywhere I turned, people in our city had a stacked … END_OF_DOCUMENT_TOKEN_TO_BE_REPLACED

Here’s a round-up of Kansas City restaurant news for December 2021, including an exciting new lounge in the basement of the Hotel Kansas City and three big announcements in Westport, headlined by a … END_OF_DOCUMENT_TOKEN_TO_BE_REPLACED

Maverick Hiu, a Kansas City area native, is coming back to his hometown this week and bringing an entire Broadway troupe with him.  Hiu, who was born in Overland Park and lived there most of his … END_OF_DOCUMENT_TOKEN_TO_BE_REPLACED