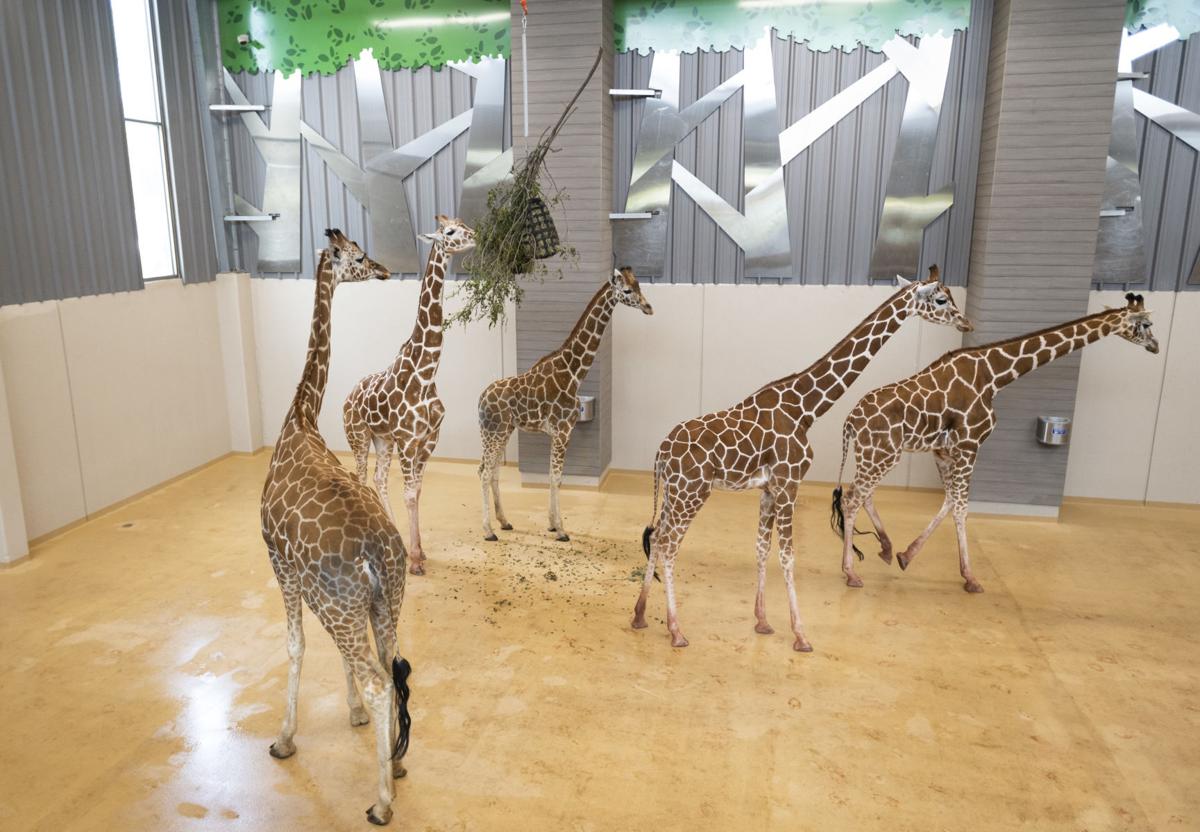 The five female giraffes at the Lincoln Children’s Zoo spent some time together earlier this week in their enclosure. 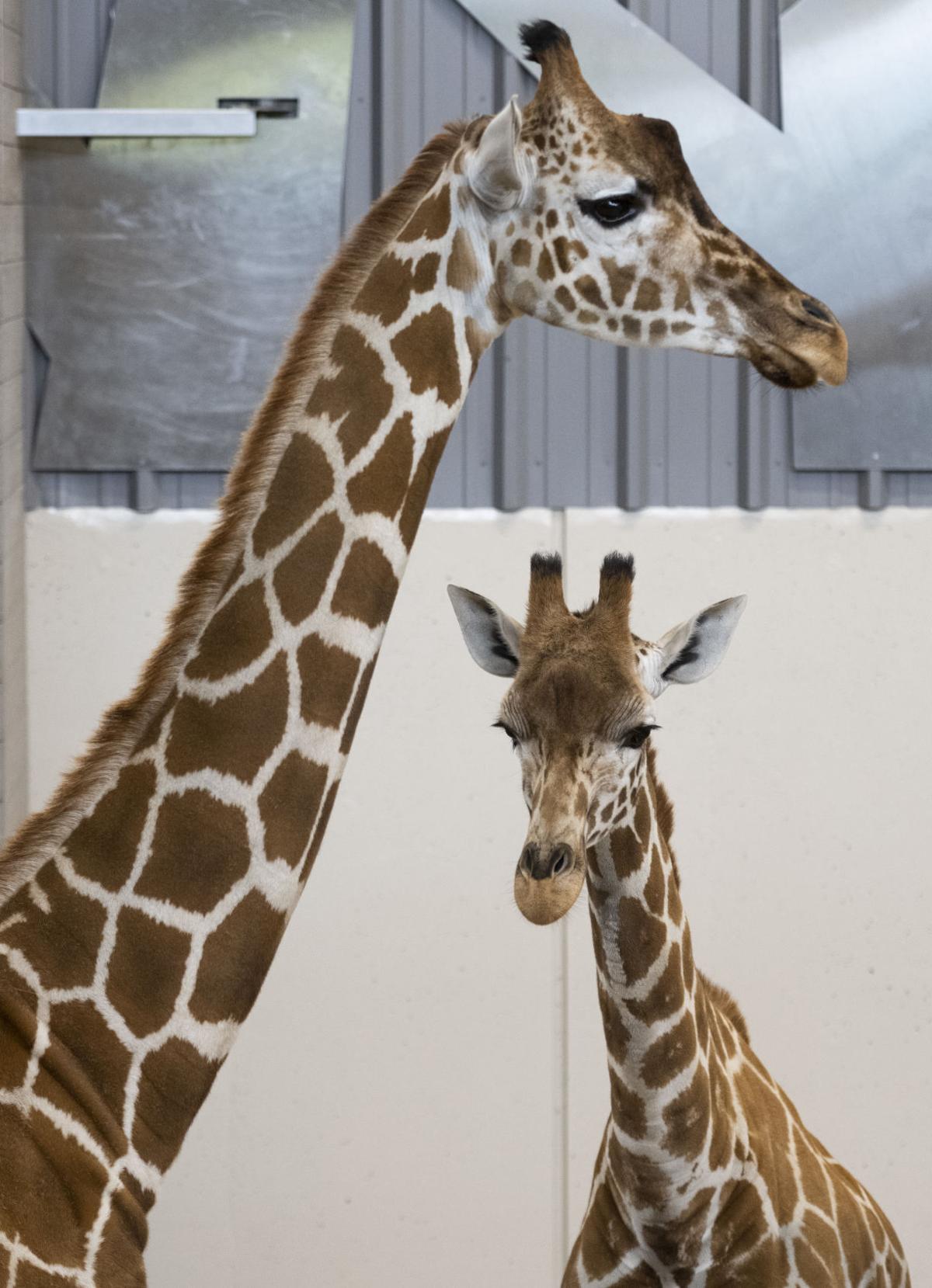 Zawadi (left) and Ruby moved to Lincoln from the San Diego Zoo Safari Park earlier this month. The Lincoln Children’s Zoo will introduce them to the public Thursday. 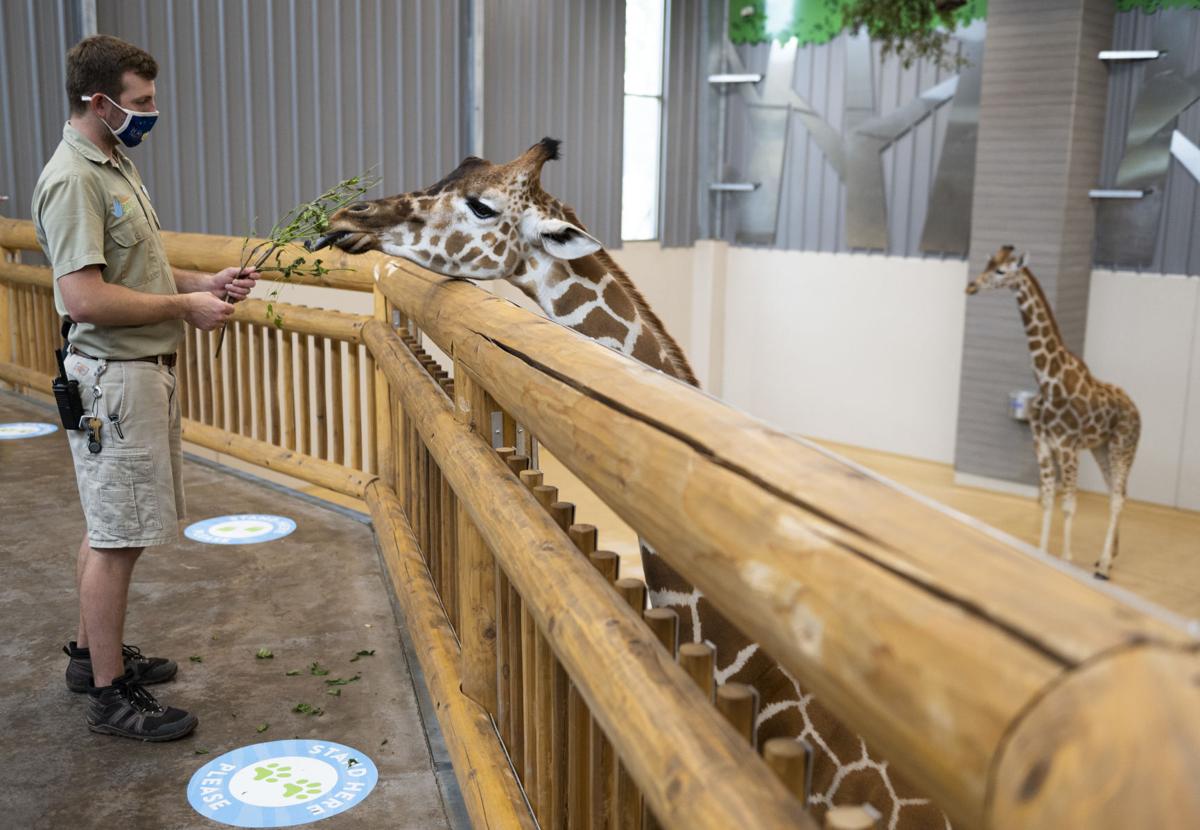 Giraffe keeper Jake Beiermann feeds Zawadi in an attempt to bring Ruby closer to the railing at the Lincoln Children’s Zoo. Zoo guests will meet the two new giraffes Thursday. 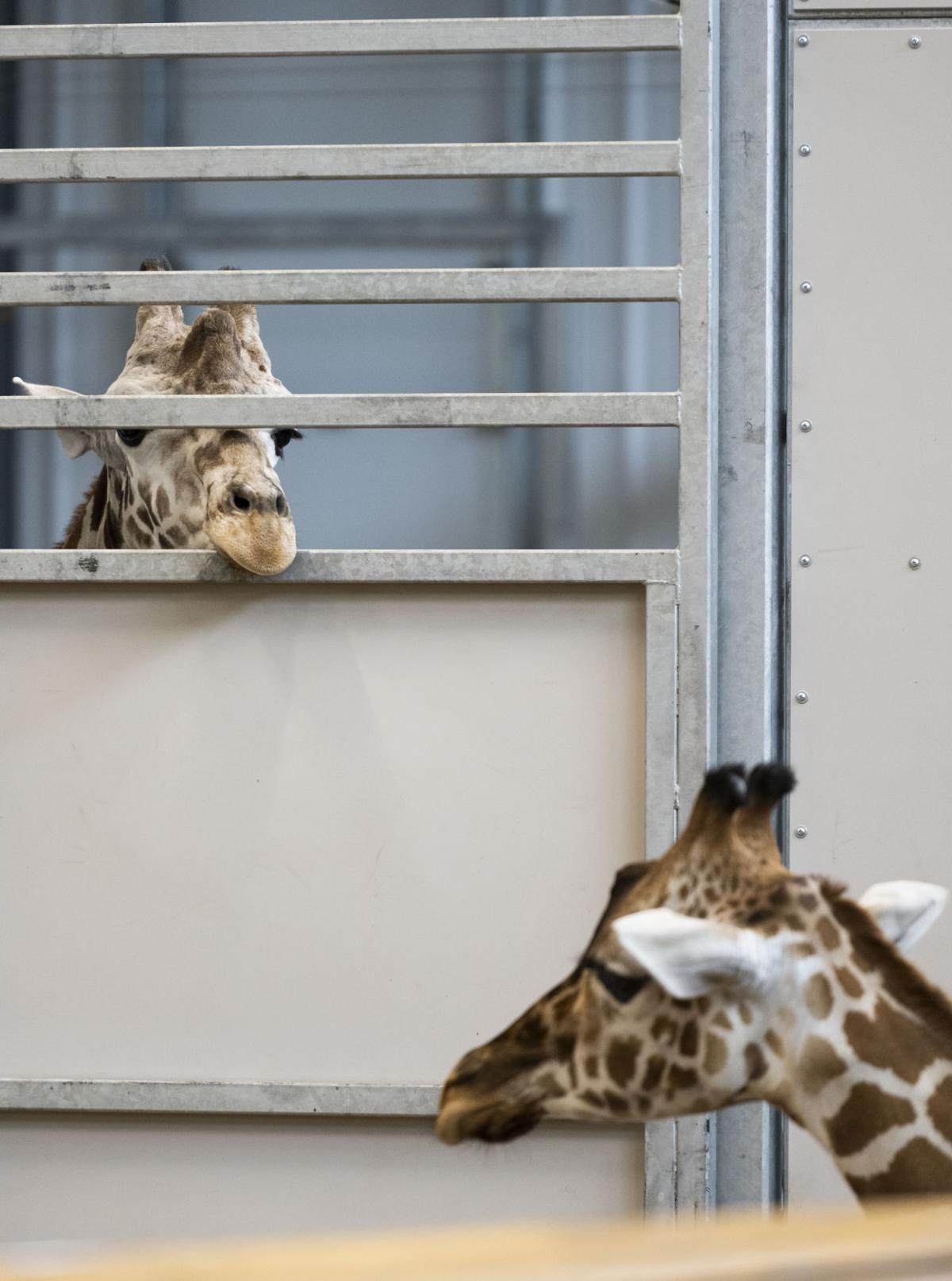 Joey, the male giraffe, looks into the enclosure at Zawadi, one of the newest giraffes at the Lincoln Children’s Zoo. 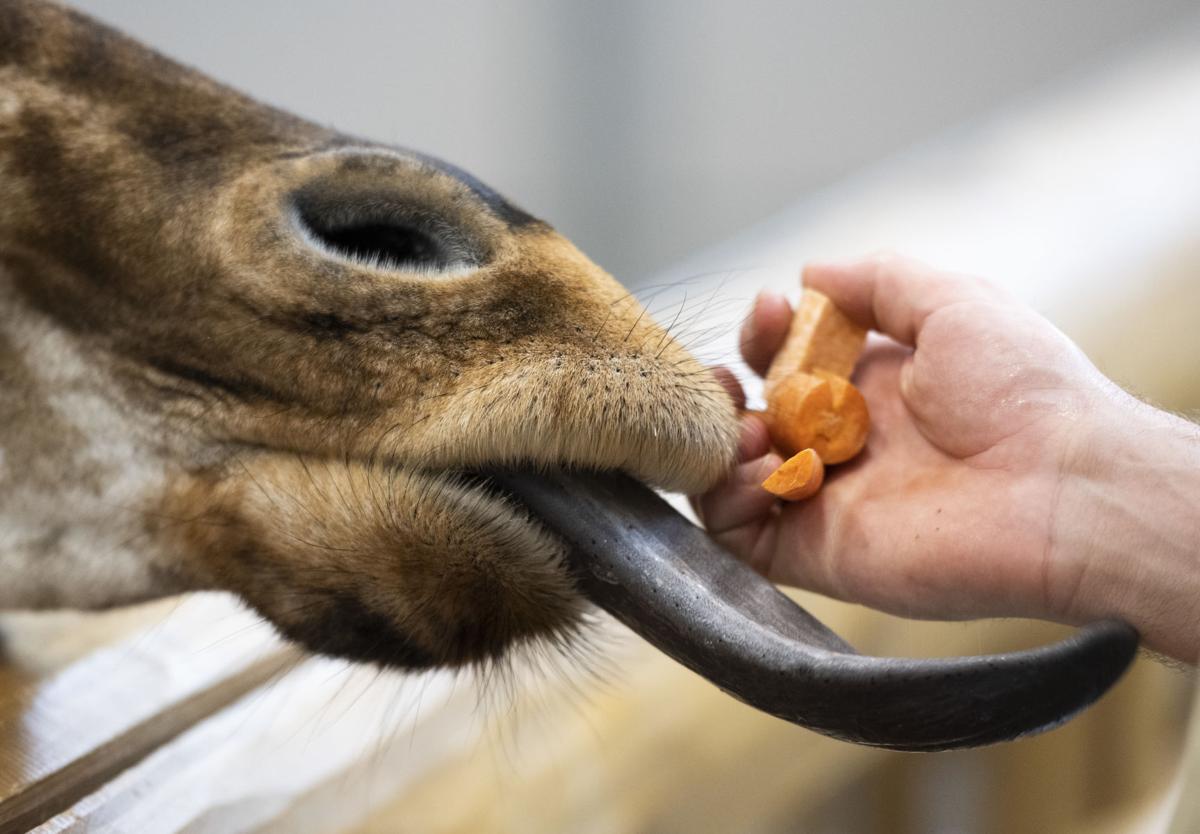 The two newest and tallest tenants of the Lincoln Children’s Zoo arrived under the cover of darkness, on a trailer from San Diego.

The timing wasn’t planned, but it was convenient, zoo spokeswoman Sarah Wood said. It made it easier for animal keepers to unload Ruby and Zawadi undetected and spirit them away behind the closed doors and covered windows of the 8,600-square-foot giraffe enclosure.

The zoo has kept them a secret for more than two weeks — time the animals needed to quarantine — but will introduce them to the public Thursday.

The new additions from the San Diego Zoo Safari Park will bring the Lincoln Children’s Zoo herd to six — five females and a male.

At Lincoln Children’s Zoo, it took a team to raise a monkey

They’ll give guests even more chances to come eye to eye — and hand to mouth — with the giraffes on the enclosure’s elevated viewing deck. The opening of the exhibit in 2019 proved to be a popular part of the zoo’s expansion, she said. Since then, the zoo sold nearly 130,000 bundles of lettuce for guests to give to the animals.

“The giraffe feeding has blown the zoo into this upper stratosphere,” she said. “The numbers are telling the stories of animal interactions and magical moments with kids.”

But the two new animals could also help the survival of their species.

“We’re ready for babies,” Wood said. “We’re quickly becoming one of the largest giraffe-breeding facilities in the country.”

The zoo is part of the Association of Zoos and Aquariums’ long-term species survival plan for giraffes, which dictates the distribution of animals to try to keep their genetics diverse.

And the plan’s coordinators have approved breeding recommendations for all five of Lincoln’s females, once they reach maturity, and Joey, the lone male.

“A lot of zoos have no breeding recommendations,” he said. “Some zoos have maybe one or two. Having five is amazing.”

The zoo planned it that way years ago, when they were drafting their $20 million expansion. The state-of-the-art indoor-outdoor giraffe habitat has heated, forgiving floors, multiple bedrooms and a calving area.

“We knew that this experience is something we wanted to bring to Lincoln,” Killeen said. “We knew we wanted to build this world-class breeding facility.”

And they could accommodate even more animals, Wood said.

“We could probably have triple the number, with the amount of space we have.”

But for now, they’re focused on making their newest two feel at home. At 2, Ruby is the youngest, and smallest of the six. She’s timid, and tends to stay close to 4-year-old Zawadi (Swahili for gift), now the oldest animal in the herd.

They were used to the 1,800-acre Safari Park, so the closer quarters of the zoo — and its guests — will take some adjustment.

“Meeting people up close and personal is going to be different for them,” Wood said. “It’s going to take time.”

But the two have had no problems with their new roommates, Joey, Kendy, Allie and Phoebe. They met face to face at first, and then side by side.

“They walked up and wrapped necks. They embraced each other,” Wood said. “Everyone gets along great.”

Caranne Camarena wanted to create a space for artists to work on their pieces and collaborate in an artistic community, much like she had at her alma mater, Kansas City Art Institute. Overland Park … END_OF_DOCUMENT_TOKEN_TO_BE_REPLACED

February is short but sweet. This month, we share our picks for the city’s best bonbons and a lot of other unique sweets that are baked, dipped and drizzled to perfection. By Dawnya Bartsch, Martin … END_OF_DOCUMENT_TOKEN_TO_BE_REPLACED

Photo by Caleb Condit and Rebecca Norden It’s Valentine’s Day month, but fancy chocolate deserves to be enjoyed year-round. We visited chocolatiers around the … END_OF_DOCUMENT_TOKEN_TO_BE_REPLACED

Posted on December 1, 2022 Overland Park now has more access to information about its Police Department than ever, thanks to a library of online transparency-focused … END_OF_DOCUMENT_TOKEN_TO_BE_REPLACED