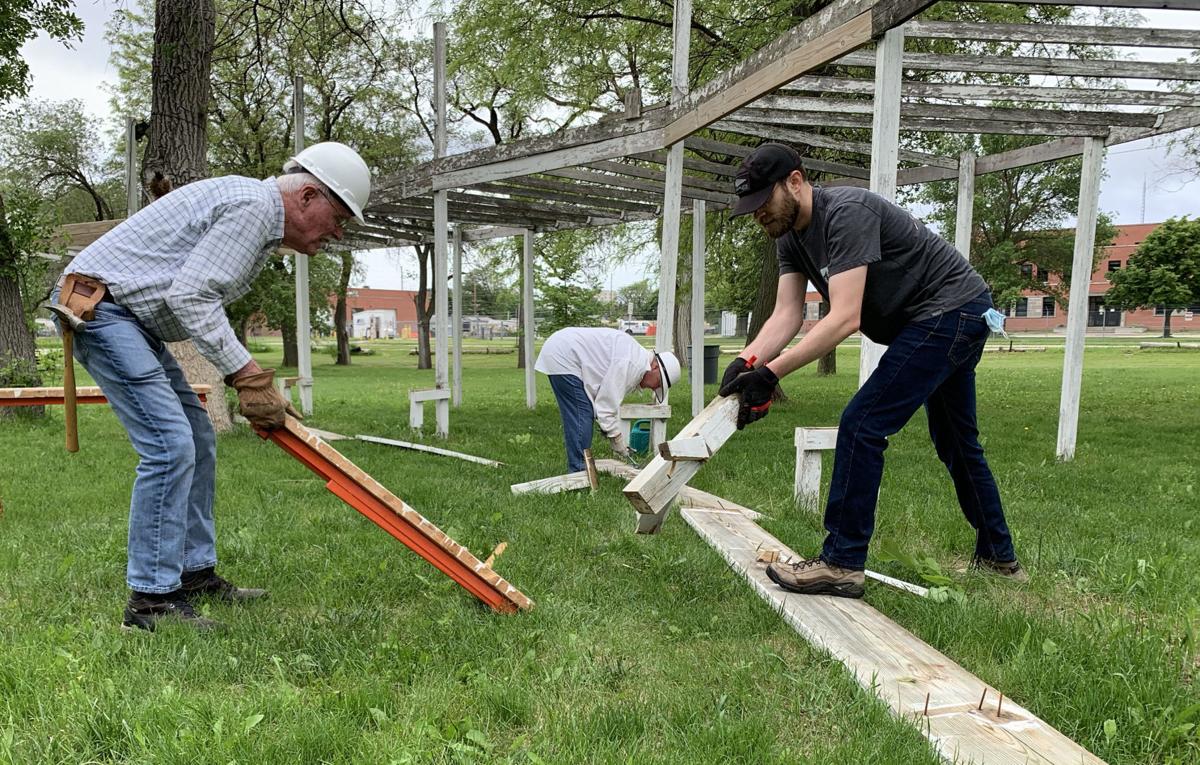 Dayle Williamson (left) and Ryan Ohs, volunteers from the Kiwanis Club of Lincoln, help tear down the aging powwow arena at the Lincoln Indian Center on Saturday. The powwow revitalization project is the first step in a summer-long rehab effort at the Indian Center. 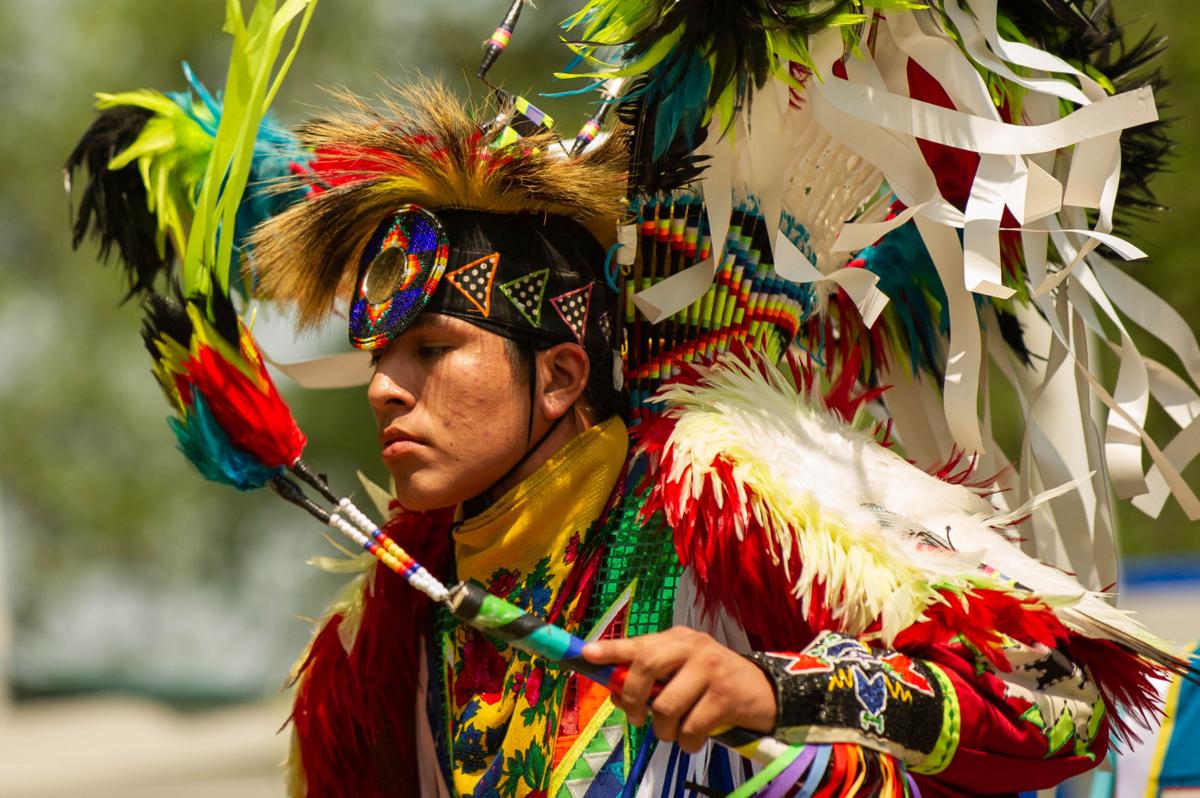 Knowee Potts dances during the grand entry at the annual Powwow in 2018 at the Lincoln Indian Center.

The state of the powwow arena at the Lincoln Indian Center had served as a symbol for the organization itself in recent years: creaky, crumbling and in need of assistance.

But close to 20 volunteers gathered at the center Saturday morning to begin work on a summer-long revitalization project that will start — but not end — with the demolition and reconstruction of the arena. The start of the project signaled a turnaround for both the structure and the institution as a whole.

“I think what it tells us the most is that the community is willing to reinvest in the Indian Center again, that we’re developing a level of trust that was lost — that we violated,” center board member Larry Weixelman said. “Over the last three or four years, the community was giving and we took, but we didn’t give back.”

After losing government funding in December 2018 and significantly reducing its service hours in January 2019, Weixelman said the work board members have put in to rehabilitate the center over the past two years has paid off with renewed community support.

Those efforts were illustrated Saturday, when volunteers and a golden retriever named Willow showed up at the center to help restore the aging powwow arena. Most volunteers were associated with the Kiwanis Club of Lincoln, which combined to put $5,000 toward the multi-week revitalization effort.

Mike Kucera, the chairman of the Kiwanis Club of Lincoln’s ag and environment committee, is serving as the project coordinator for the arena rehabilitation. Kucera said the club’s volunteers had originally planned to just repair the rundown arena. That was until Dan Waters, the owner of Decks Unlimited, donated an additional $5,000 worth of lumber to the project.

Waters was on hand at the arena demolition Saturday to provide another pair of experienced hands. He said he was compelled to donate time and resources to the Indian Center out of his “drive for positivity and community.”

“I’ve been blessed with so much,” Waters said. “For me to be able to give back at this time is just — I’m very thankful that I can give back.”

The arena reconstruction is the first in a series of steps the center is set to take this summer as part of its facility overhaul. The organization plans to build a handicap accessible pathway to the arena, one that Kucera said Brothers in Christ Construction is going to build at cost.

Kucera said the Indian Center is raising funds to make up for a $2,000 deficit in construction costs for the initial projects. The center has launched a GoFundMe campaign to aid the project and to fund additional upgrades to the arena, including roofing for the arena and bleachers that would allow for increased capacity.

Weixelman, who has served on the center’s board for two years, said additional seating at the venue could foster renewed interest in Indian Center activities from non-Native people. He lamented the increasing isolation that has enveloped the center over the years.

He said the center can’t survive without the kind of support it got on Saturday.

“If you want to provide time or energy or a donation, we always appreciate it, but mostly just know we appreciate you being out there and recognizing that we’re here,” Weixelman said. “That we’re not just a patch on the ground.”

Weixelman hopes the revitalization of the powwow arena is the first step in fulfilling a promise he made Saturday: “We’re here to stay.”

Next year Worlds of Fun will reach fifty years of business, and to celebrate it is bringing back one of its most legendary roller coasters: the Zambezi Zinger. At the time of Worlds of Fun’s opening … END_OF_DOCUMENT_TOKEN_TO_BE_REPLACED

Standing in the same location since 1857, the City Market is nearly as old as Kansas City itself. In the 1850s, over three hundred steamboats traveled on the Missouri River—including the Arabia before … END_OF_DOCUMENT_TOKEN_TO_BE_REPLACED

At 6 p.m. this Friday at the Kauffman Center, TEDxKC will have a lineup of ten speakers whose expertise range from a sky full of stars to the key to happiness to a MacArthur Genius. The theme is … END_OF_DOCUMENT_TOKEN_TO_BE_REPLACED

Mesoamericans called it food of the gods. From central Mexico down to Honduras, where the cacao tree grows native, ancient Olmecs, Mayans and Aztecs would gather the oblong fruit and break open its … END_OF_DOCUMENT_TOKEN_TO_BE_REPLACED

The definition of “comfort food” tends to vary depending on who you ask. At two new Brookside restaurants, Brady & Fox and Earl’s Premier, the term applies both to time-honored Irish recipes and East … END_OF_DOCUMENT_TOKEN_TO_BE_REPLACED