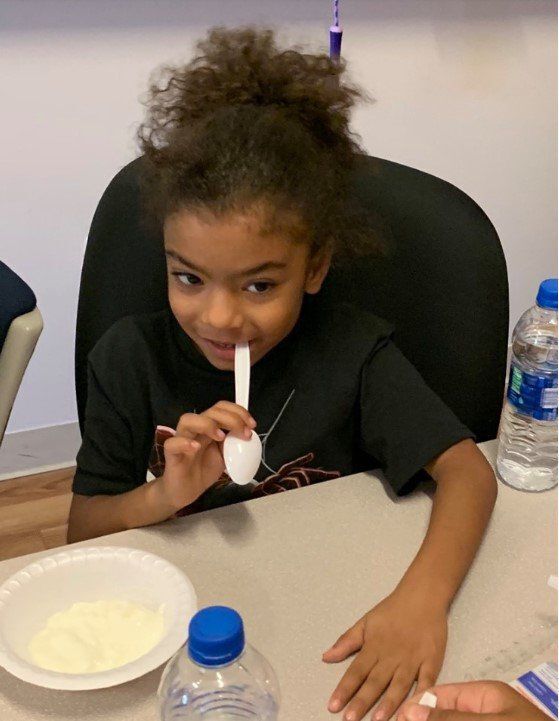 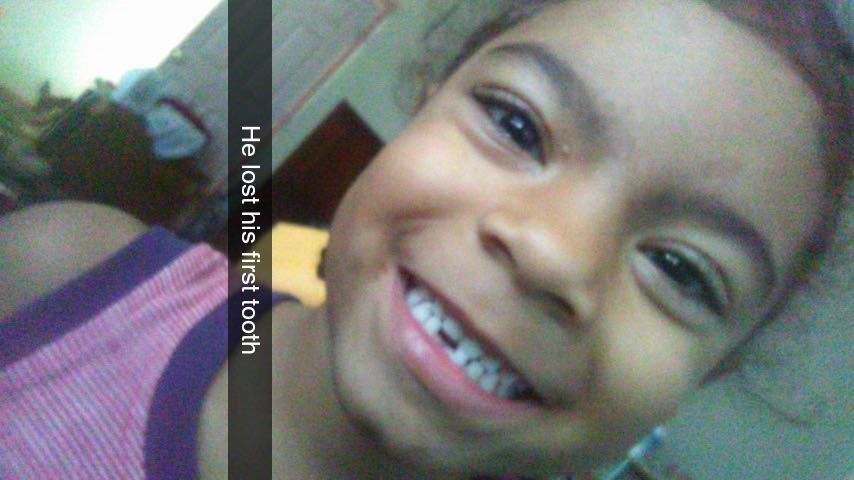 Xavier Usanga, then 5, poses for a photo after losing his first tooth. Photo provided by Usanga family 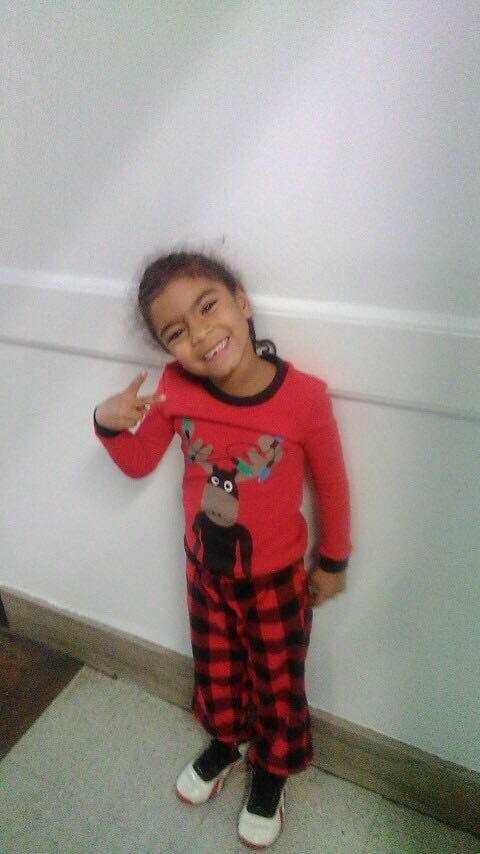 Xavier Usanga, then 6, poses for a picture after his school holiday assembly in December 2018. Photo provided by Usanga family. 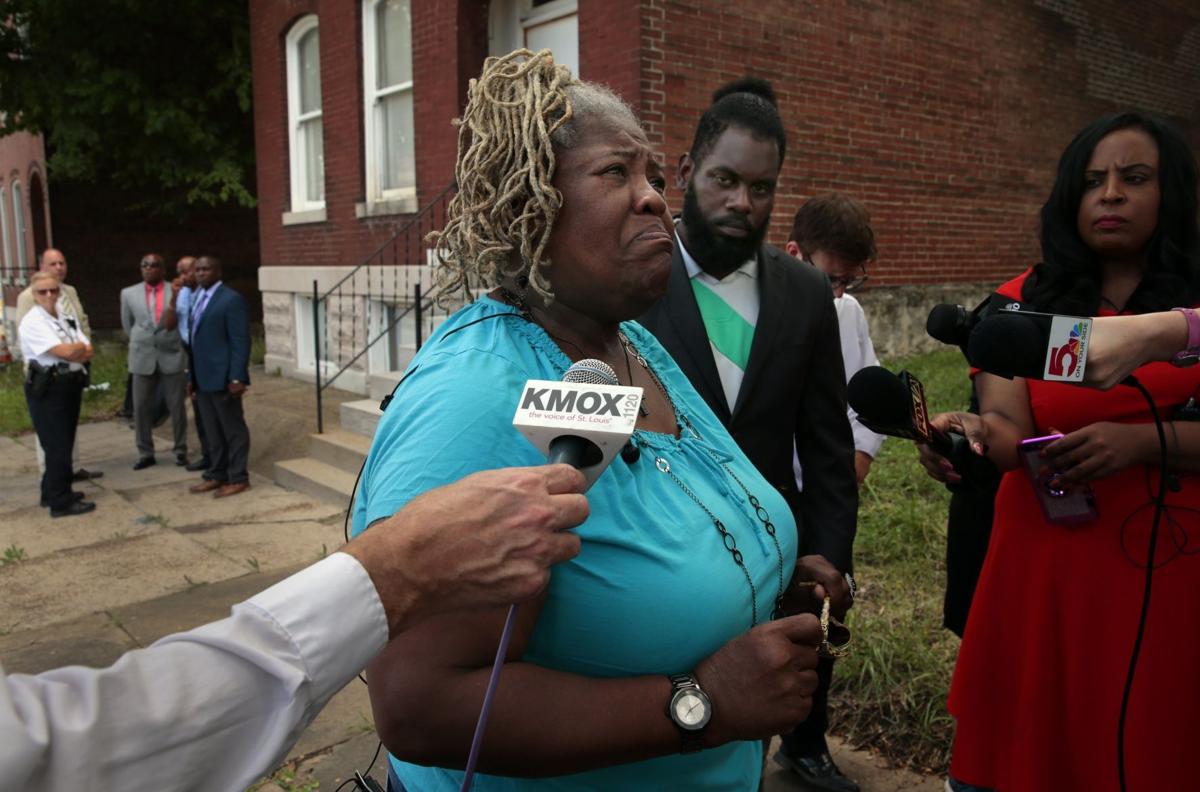 Mary Norwood, grandmother of 7-year-old Xavier Usanga, says she wishes she had taught her grandson what to do if he heard gunshots, as she talks to reporters on Tuesday, Aug. 13, 2019, a day after Xavier was shot and killed in the 3500 block of N. 14th Street in the Hyde Park neighborhood. Photo by Robert Cohen, rcohen@post-dispatch.com. 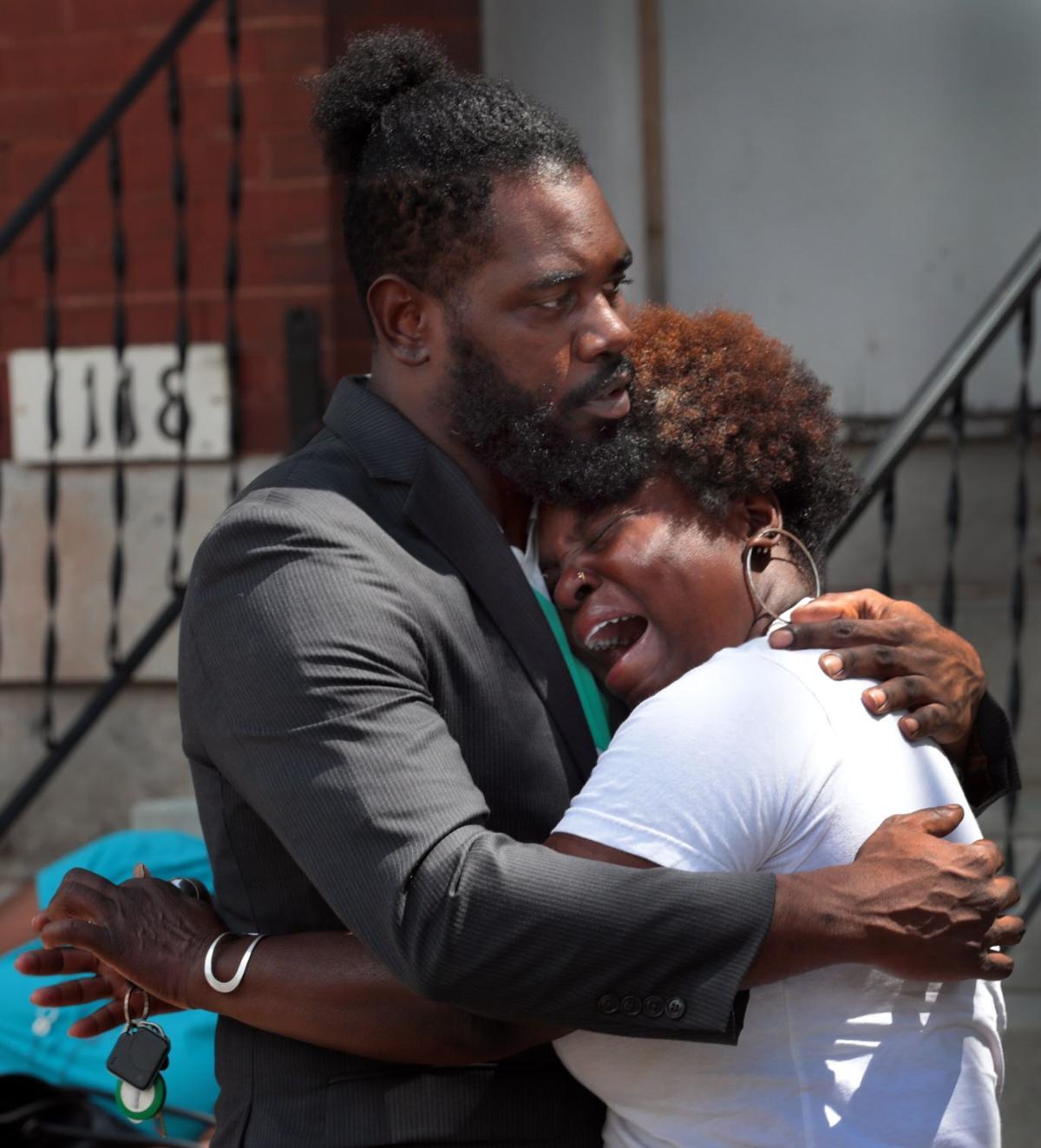 Carmen Long, a longtime neighbor of the Usanga family, is comforted by Alderman Brandon Bosley after a news conference about the death of 7-year-old Xavier Usanga on Tuesday, Aug. 13, 2019, a day after Xavier was shot and killed in the 3500 block of N. 14th Street in the Hyde Park neighborhood. Photo by Robert Cohen, rcohen@post-dispatch.com.

ST. LOUIS — Federal prosecutors next month will ask a judge for a “substantial” increase in the prison sentence for the man who has been accused of, but denied, the 2019 shooting of 7-year-old Xavier Usanga.

Malik Ross has not been charged with Xavier’s shooting, but his sentencing hearing on a related accusation in U.S. District Court on March 2 may resemble a mini-trial over the killing of Xavier.

Days after the Aug. 12, 2019, shooting, federal prosecutors charged Ross with stealing $50,000 from his employer, an armored car company. In a federal court hearing weeks later, a police detective said Ross told police that he stole the money so he could flee St. Louis, believing that he had shot Xavier.

He told police someone fired at him first, and he returned fire in self-defense, according to court documents and testimony. St. Louis prosecutors have declined to charge Ross in the shooting, saying that evidence was insufficient.

In a court filing Friday, Assistant U.S. Attorney Allison Behrens laid out the case against Ross, saying he deserved a “substantial” increase from the recommended sentencing guidelines of eight to 14 months for the charges related to the stealing.

“There is not a single shred of evidence that (Ross) acted in self-defense,” the filing says, and no evidence that anyone fired at Ross or displayed a weapon.

At the time of the shooting, Ross was on his way to a gas station to buy lottery tickets, wearing a bulletproof vest with a loaded Glock handgun tucked in his waistband, the filing says.

An 18-year-old and a juvenile left a porch in the 3500 block of North 14th Street and walked across the street, the filing says. Ross claimed that one pulled a gun and shot at him, the filing says, but he couldn’t remember which one and changed his story.

Ross fired blindly, rattling off six shots as he ran for an alley, then eight more once there, the filing says.

He hit the man in the street, who survived, and also hit Xavier, who was playing behind the house with his sisters, the filing says.

Ross would later get rid of his vest and gun, and asked his aunt for help fleeing town, the filing says. He stole a bag containing $50,000 from his employer, Garda World Cash Logistics, by dropping it in the street for his aunt to pick up.

Behrens’ filing says audio evidence and the bullet casings found at the scene do not support Ross’ claim that the teen fired first. “There can be no dispute that (Xavier) was hit by … Ross’s firearm,” she wrote.

Ross pleaded guilty in August to conspiracy and stealing charges and admitted taking the money.

His aunt, Shamekia Jackson, was indicted in November on the conspiracy charge and has pleaded not guilty. Her trial has been delayed due to the coronavirus pandemic.

Ross’ Feb. 16 sentencing was delayed due to the snowstorm.

Malik Ross, 23, appeared in court on an unrelated charge: Prosecutors said he stole $50,000 from an armored car company for which he worked.

Coverage of children who died in the St. Louis area in 2019

These are the local incidents of homicide or neglect involving children, based on Post-Dispatch reporting. This list doesn’t include children killed in car accidents (unless a criminal charge was filed) or incidents not being investigated by homicide detectives.

A body that was found over the weekend in the parking lot of an East St. Louis middle school was identified Monday as that of a 13-year-old boy.

Police in Ferguson found two teen boys, ages 15 and 16, who both had been shot, inside a vehicle about 12:45 p.m. The older teen was seriously…

Sylvester Knighten Jr., 31, and the boy’s mother Danesha Cannamore, 31, were both arrested when police responded Wednesday to a call for an un…

The father of a 2-year-old girl killed in an accidental shooting in north St. Louis County this week is accused of leaving a loaded gun in a d…

Caleb Smith, was gunned down Wednesday in an alley in the 8300 block of Strathmore Place.

Tavares Chisholm, 4, of St. Louis, was hit and killed by a car as his mother pushed him and a 2-year-old in a stroller. A 27-year-old was char…

A 15-year-old boy was gunned down before sunup when someone fired a flurry of shots into a home in the north St. Louis County area of Glasgow …

The shooting happened shortly after 6 p.m. Thursday near the 11100 block of Oak Parkway Lane, as the teen walked through an apartment complex …

A 3-year-old boy fatally shot himself after finding a gun in the Laurel Park apartments north of Jennings, police said.

He was found shot in the head just before 6 a.m. in the 7300 block of Vermont Avenue in the Carondelet neighborhood of south St. Louis.

Police confirmed that a 10-year-old girl was among three people killed on the 700 block of North 21st Street around 6:30 p.m. The other victim…

The shooting occurred about a block north of Soldan High School, where a football exhibition was held Friday night. Fights broke out at the ev…

The mayhem has left brass begging for leads, politicians promising change, and parents at wits’ end: frustrated by lackluster investigations, …

Officers found Jason Eberhart Jr. dead in a parking lot in the 1300 block of Hogan Street around 2 a.m. Police said he was shot several times.

Taylor Jordan Baumer, 20, of the 1000 block of Adworth Drive in Mehlville, has been charged with endangering the welfare of a child in the fir…

The day before he was to start as a second grader at Clay Elementary, Xavier Usanga was fatally shot while standing near an 18-year-old who wa…

He was inside an apartment with a group of teenagers when he was shot. He was found dead soon after.

Eddie was shot about 8:30 p.m. at a home in the 4700 block of Page Boulevard near the intersection with Marcus Avenue, police said. He was sit…

Was found shot to death inside a vehicle at a gas station at 4355 South Broadway; a 16-year-old in the car was not injured.

Two teens and one adult were shot about 7:30 p.m. in the 1500 block of Fourth Street in Madison. One of the teenagers died of his wounds.

Police found him lying in the street about 3 a.m. Tuesday with multiple gunshot wounds in the 44000 block of Cupples Place. He died the next day.

Myiesha Cannon, 16, was shot in the head about 1:25 a.m. in the 4400 block of Lexington Avenue. Police have labeled the shooting as a “suspici…

Police are labeling the case a “suspicious death” and released no additional details. Her mother said she found a 9 mm pistol and accidentally…

Kennedi Powell and her neighborhood friends had just swarmed her father’s car for a piece of pizza Sunday evening when a white car drove past,…

Jashon Johnson, of the 2700 block of Allen Avenue, was shot several times near Red Bud and Margaretta, police said.

The parents of a baby girl who died last week after being left inside a hot car in Calverton Park were charged with manslaughter Monday.

Jaylon McKenzie, 14, an eighth grader at Mason-Clark Middle School in East St. Louis who was featured in Sports Illustrated as one of six youn…

Kayden Johnson, 2, and his mother Trina’ty Riley, 18, were found dead with gunshot wounds shortly before midnight in their home in the 5900 bl…

Curtis Marshall, 15, was the victim of a targeted shooting in the 1700 block of Cargill Drive, police said.

Police initially called the shooting a “suspicious death,” but later said they had concluded Evione accidentally shot himself in the 1700 bloc…

Demarco Washington, 32, of the 10700 block of Spring Garden Drive in the Glasgow Village area, was charged with a felony count of child endang…

Elijah Roby, 2, died in a car accident. His mother, Ebony Roby, 25, was charged with first-degree child endangerment in connection with the case.

Perhaps I’ve had cachete tacos in Kansas City before and not realized it. They go by a couple other names—cabeza, barbacoa. In Spanish, cachete means “beef cheeks” (one part of the cabeza) and it is … END_OF_DOCUMENT_TOKEN_TO_BE_REPLACED

Posted on January 25, 2022 City Council has approved a new pilot program allowing many Overland Park residents to raise chickens. Under the program, residents will be able to … END_OF_DOCUMENT_TOKEN_TO_BE_REPLACED

El Torreon Ballroom was born as a Jazz Age ballroom. In the seventies, the building became a counterculture hub as The Cowtown Ballroom. New owners have big plans to give it a new life. Twice in its … END_OF_DOCUMENT_TOKEN_TO_BE_REPLACED

In Kansas City Actors Theatre’s The Pests, all Eraste wants to do is meet up with his beloved. And all anybody else wants to do is detain him.  The play, which runs through January 30 at the City … END_OF_DOCUMENT_TOKEN_TO_BE_REPLACED