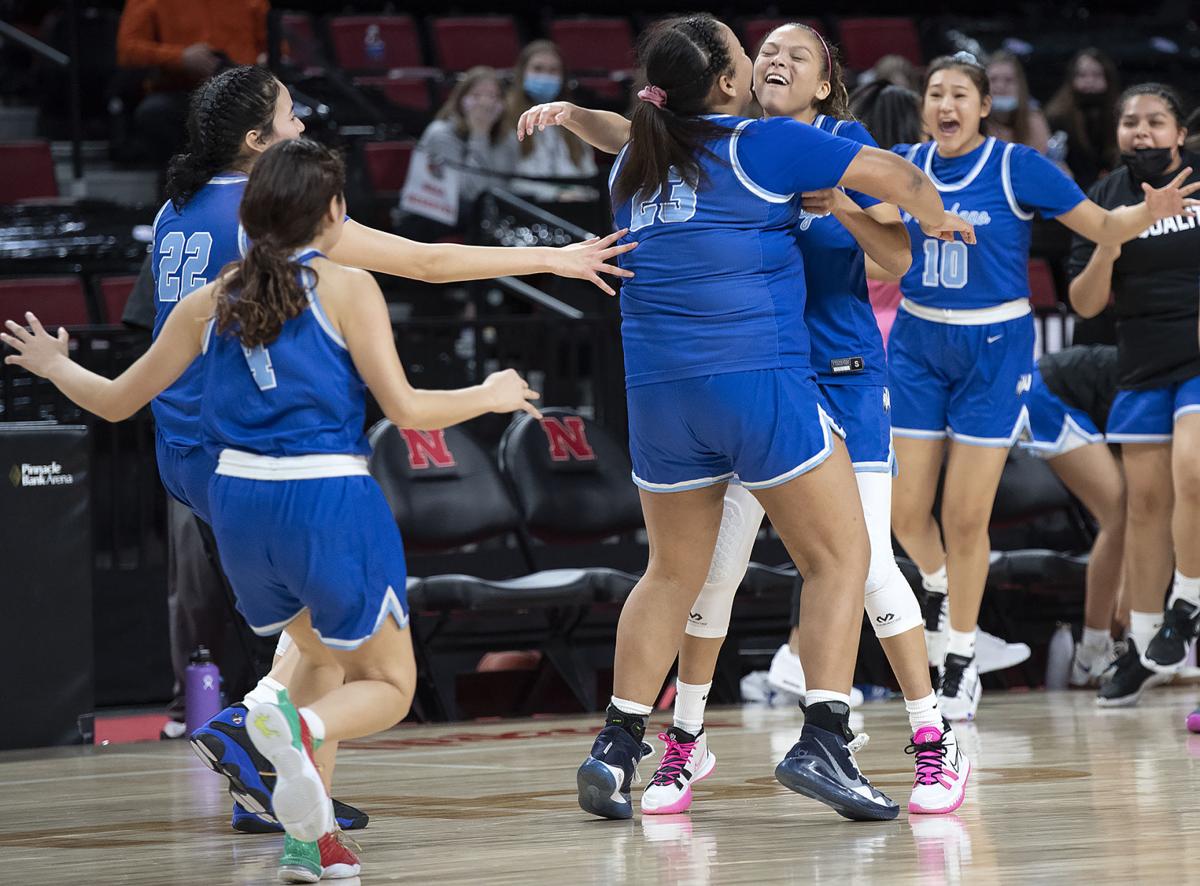 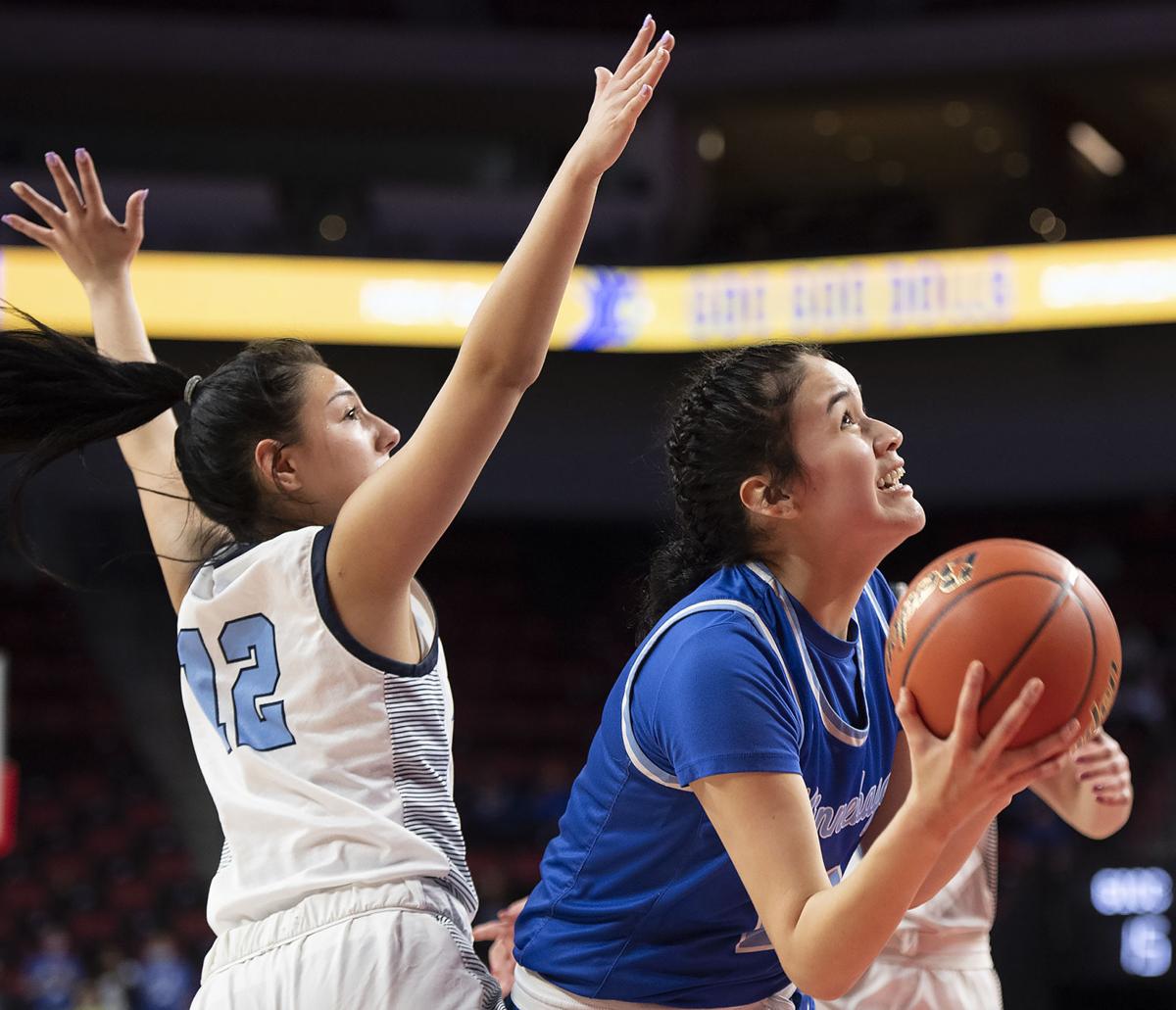 Cinderella wears blue this year, hits a bunch of threes and plays with no fear.

There are nerves, but definitely no fear.

The Winnebago girls basketball team recovered from an early double-digit hole, and then battled back from another late deficit to upset fifth-ranked Grand Island Central Catholic 48-46 during the opening round of the Class C-1 state tournament Wednesday afternoon at Pinnacle Bank Arena.

In a span of five days, the Indians have defeated the district round’s No. 1 seed, and now the state tournament’s No. 1 seed, which belonged to the Crusaders.

Winnebago needed to knock off a tough Pierce team in a subdistrict final to even qualify for districts. It did to earn the 16th and final seed. Winnebago then stunned Malcolm 51-49 behind 10 threes to earn its first state berth since 1990.

“It feels great,” senior point guard Natasha Deal said. “We knew we could beat them (GICC), we always knew we were the better team, and we had to come and show them that rankings don’t matter, records don’t matter.”

Grand Island Central Catholic jumped to an early 14-4 lead behind the play of 6-foot sophomore post Lucy Ghaifan, who had eight points in the first quarter.

Bear could sense his team was trying to fight through some nervous energy early. He told the players to treat it like any other game.

“It was very nerve-wracking, especially during warmups and seeing the crowd coming,” said Deal, who finished with 16 points.

But Winnebago settled in and answered with a 15-1 run. Deal played a big part in the surge, scoring nine points in the second quarter. Her three-point play gave the Indians a 17-16 lead.

Junior Alyssa Wilson, who had 15 points on five threes, helped GICC regain the lead at 43-41 on a three-pointer with 3:25 remaining.

But like it did against Malcolm in the second half, Winnebago showed it has a resilient group of players, and they’re not afraid of the big moments.

Deal scored near the basket to tie the game at 41-41 with 1 minute remaining, and on GICC’s ensuing possession, sophomore Sylvia Valentino got a steal and scored on a layup to give Winnebago the lead for good.

“We’ve been in that situation where we were down and there’s only a couple seconds left,” Valentino said. “We always fight through and that’s what I had to do. I just had to push for my team because I knew we wanted it.”

Winnebago was 6-9 through 15 games this season, but it also played one of the toughest schedules in the state. It included state qualifiers Guardian Angels Central Catholic, Hartington Cedar Catholic, Wynot and Ponca.

The girls started clicking around conference tournament time, Bear says, putting together four quarters, and that has led to 10 wins in 11 games.

“(When) we went into the Malcolm game the girls were just perfectly balanced and confident,” Bear said. “They were right there in the middle, they weren’t intimidated by (Malcolm’s) record.

“We knew coming down here that everybody else was going to have a better record than us, but none of that mattered. We showed that we belonged down here.”

Bear said the girls on this year’s team were at those games.

Now the 14 girls who make up Winnebago’s roster look to continue to write their own story. The next challenge is defending state champion and No. 6 North Bend Central in Friday’s 9 a.m. semifinals at Pinnacle Bank Arena.

“Hopefully it’s just like any other game,” Deal said. “We’re going to try to make it feel like that.”

North Bend Central picked up where it left off last year at Pinnacle Bank Arena when it defeated Lincoln Christian for the C-1 state crown.

Sisters Kaitlyn and Sydney Emanuel teamed up to carry the Tigers (22-3) past No. 3 Broken Bow 50-29 Wednesday.

“They can do things a coach wants done on the floor,” NBC coach Aaron Sterup said. “It’s a lot easier for me when we just kind of roll the ball out to them, because they know what they’re doing.

“They’re invaluable to have and glad they’re on our side.”

{{featured_button_text}} Jake Immink of Fairbury was on a ventilator for more than 120 days, first at Bryan West Campus in Lincoln and then at the Nebraska Medical Center. While he recovered from … END_OF_DOCUMENT_TOKEN_TO_BE_REPLACED