DUBAI, United Arab Emirates (AP) – The United States has joined the United Kingdom and Israel in accusing Iran of carrying out a deadly drone strike that killed two aboard a tanker off Oman.

U.S. Secretary of State Antony Blinken made the announcement in a statement Sunday.

Blinken said: “Upon review of the available information, we are confident that Iran conducted this attack, which killed two innocent people, using one-way explosive (drones), a lethal capability it is increasingly employing throughout the region.”

He added that there was “no justification for this attack, which follows a pattern of attacks and other belligerent behavior.”

This Jan. 2, 2016 photo shows the Liberian-flagged oil tanker Mercer Street off Cape Town, South Africa. The oil tanker linked to an Israeli billionaire reportedly came under attack off the coast of Oman in the Arabian Sea, authorities said Friday, July 30, 2021, as details about the incident remained few.
(Johan Victor via AP)

Calling it a “unlawful and callous attack,” British Foreign Secretary Dominic Raab said his country and its allies planned a coordinated response over the strike Thursday night on the oil tanker Mercer Street. It marked the first-known fatal attack after years of assaults on commercial shipping in the region linked to tensions with Iran over its tattered nuclear deal.

While no one has claimed responsibility for the attack, Iran and its militia allies have used so-called “suicide” drones in attacks previously, which crash into targets and detonate their explosive payloads. However, Israel, the U.K. and the responding U.S. Navy have yet to show physical evidence from the strike or offer intelligence information on why they blame Tehran.

Israeli Prime Minister Naftali Bennett went further than Raab in remarks Sunday at a Cabinet meeting, making a point to stare directly into the camera and slowly warn: “We know, at any rate, know how to convey the message to Iran in our own way.” 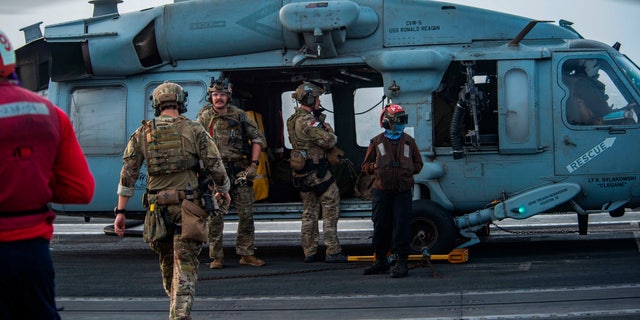 In this photo provided by the U.S. Navy, sailors assigned to an explosive ordnance unit board an MH-60S Seahawk helicopter on the flight deck of aircraft carrier USS Ronald Reagan to head to an oil tanker that was attacked off the coast of Oman in the Arabian Sea on Friday, July 30, 2021.
(Mass Communication Specialist 2nd Class Quinton A. Lee/U.S. Navy, via AP)

The drone attack blasted a hole through the top of the oil tanker’s bridge, where the captain and crew command the vessel, a U.S. official said. The official spoke on condition of anonymity as an investigation into the attack still was ongoing. The blast killed two crew members from the United Kingdom and Romania.

The Navy said the American nuclear-powered aircraft carrier USS Ronald Reagan and the guided missile destroyer USS Mitscher escorted the Mercer Street as it headed to a safe port. On Sunday, satellite-tracking information from MarineTraffic.com showed the tanker stopped off the coast of Fujairah in the United Arab Emirates.

In his statement, Raab said it was “highly likely” Iran attacked the tanker with one or more drones.

“We believe this attack was deliberate, targeted and a clear violation of international law by Iran,” he said. “Iran must end such attacks, and vessels must be allowed to navigate freely in accordance with international law.” 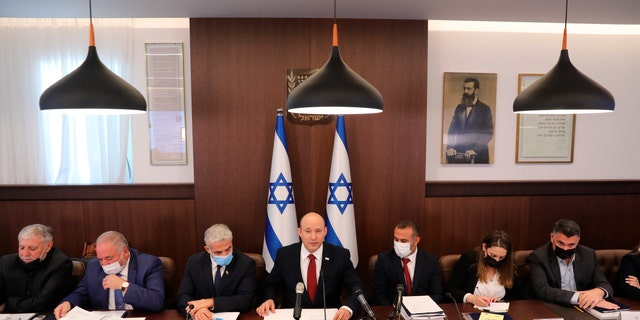 “It’s not the first time that the Zionist regime occupying Jerusalem has made such empty accusations against the Islamic Republic of Iran,” Khatibzadeh said. “Wherever this regime has gone, it has taken instability, terror and violence with it.”

TOKYO OLYMPICS 2020: AMERICANS WHO HAVE WON GOLD MEDALS AT THE GAMES

He added: “Whoever sows the wind shall reap the whirlwind.”

Khatibzadeh spoke around an hour after Iran’s outgoing president acknowledged that his government at times “did not tell part of the truth” to the public during his term. 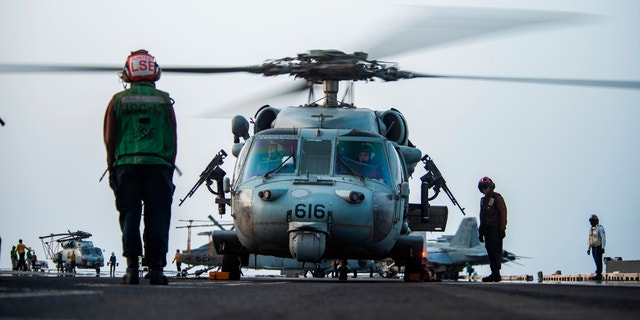 In this photo provided by the U.S. Navy, sailors on board an MH-60S Seahawk helicopter on the flight deck of aircraft carrier USS Ronald Reagan prepare to head to an oil tanker that was attacked off the coast of Oman in the Arabian Sea on Friday, July 30, 2021. An attack on an oil tanker linked to an Israeli billionaire killed two crew members off Oman in the Arabian Sea, authorities said Friday, marking the first fatalities after years of assaults targeting shipping in the region. (Mass Communication Specialist 2nd Class Quinton A. Lee/U.S. Navy, via AP)

From Jerusalem, Bennett offered condolences to both the United Kingdom and Romania for the killing of their citizens. He said Israeli intelligence had evidence linking Iran to the attack, but did not offer it.

“Iran is the one who carried out the attack against the ship,” he said. “Iran’s aggressive behavior is dangerous not only for Israel, but harms global interests in the freedom of navigation and international trade.”

Other Israel-linked ships have been targeted in recent months as well amid a shadow war between the two nations, with Israeli officials blaming the Islamic Republic for the assaults. Shipping in the region began being targeted in the summer of 2019, about a year after then-President Donald Trump unilaterally withdrew America from Iran’s nuclear deal with world powers.

Israel meanwhile has been suspected of conducting a series of major attacks in Iran and on Iranian shipping. Also, Iran saw its largest warship recently sink under mysterious circumstances in the nearby Gulf of Oman.

The Mercer Street, owned by Japan’s Taihei Kaiun Co., is managed by London-based Zodiac Maritime, part of Israeli billionaire Eyal Ofer’s Zodiac Group. In early July, the Liberian-flagged container ship CSAV Tyndall, once tied to Zodiac Maritime, suffered an unexplained explosion on board while in the northern Indian Ocean, according to the U.S. Maritime Administration.

The attack marks the first major confrontation with Iran for Bennett, who took over as premier in June after a coalition deal unseated Israel’s long-serving Prime Minister Benjamin Netanyahu. Netanyahu is suspected of launching a series of attacks targeting Iran, including explosions at the country’s main enrichment site and the killing of a prominent military nuclear scientist.

However, Bennett as well has made hawkish comments in the past about needing to attack “the head of the octopus” in Tehran as opposed to Iran’s regional militias like Hezbollah in Lebanon. The attack on the Mercer Street marks the first during his time as prime minister and analysts suggest he could seek a major attack in retaliation.

“Israel may wish to deliver a resounding blow; that’s the spirit of political sources’ comments in Jerusalem,” wrote Amos Harel, a longtime military analyst for the Israeli newspaper Haaretz. “This blow will be aimed at ending things without a tit-for-tat that could escalate. But as usual, events also depend on the other side.”

Here are sixteen great things to do in Kansas City this weekend, November 24-27, including A Christmas Carol, the Plaza Lighting Ceremony, and a holiday pop-up at Boulevard. Monet & Friends Alive  … END_OF_DOCUMENT_TOKEN_TO_BE_REPLACED

Jayla Williams is one of the first students to take college classes for UMKC for free/Courtesy photo Kansas City public high schoolers are in for a ride—to college, for free. The … END_OF_DOCUMENT_TOKEN_TO_BE_REPLACED

Fresh hand-made cappelletti/Courtesy of Zero Zero Mitch Fagan is a bit of a purist when it comes to crafting pasta by hand. His traditionalist mentality formed during his many trips … END_OF_DOCUMENT_TOKEN_TO_BE_REPLACED

Posted on November 21, 2022 The Kansas Chapter of the American Planning Association has recognized Downtown Overland Park as a Great Place in Kansas. ​​Great Places awards … END_OF_DOCUMENT_TOKEN_TO_BE_REPLACED

Annel Alvarez has been dancing Folklórico since she was five years old, but it wasn’t always the KCK native’s passion. Folklórico is a traditional cultural dance in Mexico and Central America that … END_OF_DOCUMENT_TOKEN_TO_BE_REPLACED