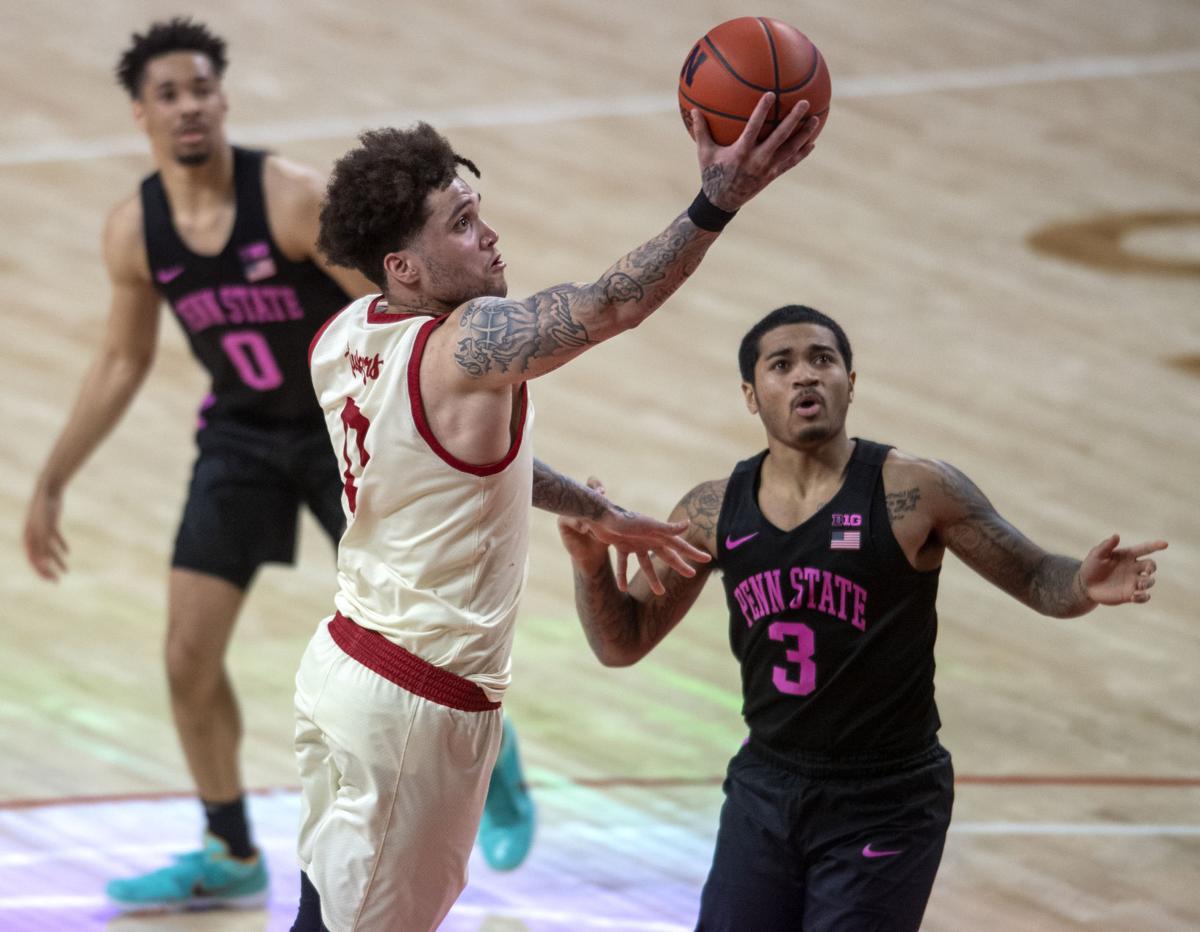 Nebraska guard Teddy Allen (0) drives to the basket to bring the Huskers to within one point with 14 seconds left in the game against Penn State’s Sam Sessoms (3) and Myreon Jones (0) during the second half Tuesday at Pinnacle Bank Arena. 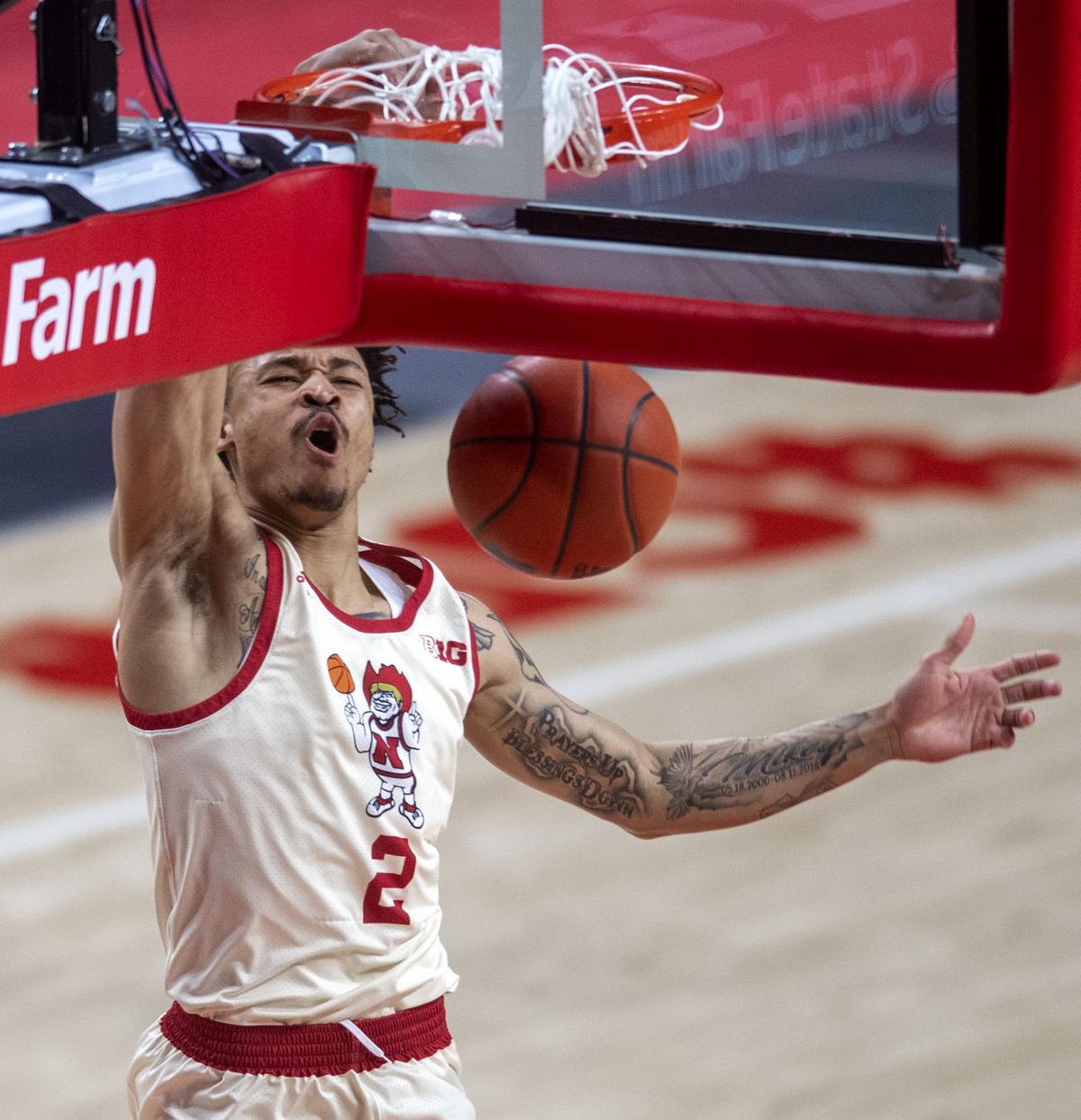 Nebraska guard Trey McGowens (2) scores on a runaway dunk against Penn State during the first half Tuesday at Pinnacle Bank Arena.

One of the best scoring games — and one of the best all-around games — in Nebraska basketball history went for naught Tuesday as Penn State held off the Huskers 86-83 at Pinnacle Bank Arena.

Teddy Allen scored 41 points, the second-best single-game total ever by a Husker player and the most ever scored by any player in Pinnacle Bank Arena. He also had eight rebounds and six assists.

But, “it don’t mean nothing,” Allen said after the game. “We came up short.”

Nebraska had 18 turnovers that led to 25 Penn State points. Plus, Penn State’s 16-2 advantage in offensive rebounds led to a 16-3 Nittany Lion advantage in second-chance points. Nebraska’s defensive lapses, especially in the first half, allowed PSU to get into a rhythm offensively as it got payback for Nebraska’s 62-61 win in State College on Feb. 14.

Allen, a junior, finished 16-of-24 from the field and 6-of-9 from three-point range in tying Iowa’s Luka Garza for the most points scored in a game by a Big Ten player this season. He either scored or assisted on 30 of Nebraska’s 38 first-half points.

In Nebraska history, only Eric Piatkowski (42 points), has scored more points in a single game.

On Tuesday, Piatkowski’s son Jace, a Husker walk-on, watched from the bench as Allen put on a show. His 28 first-half points were a Nebraska record for a half, and the sole reason NU was even in the game at halftime as his teammates combined for 10 points on 4-of-15 shooting in the opening 20 minutes.

All it really meant, though, was more frustration for the Huskers (5-16, 1-13 Big Ten), who weren’t able to overcome their own mistakes or Penn State’s massive rebounding advantage.

“The toughness plays, the 50/50 balls, they (Penn State) got most of them — pretty much all of them in the first half,” Nebraska coach Fred Hoiberg said. “The last 10 minutes (of the game) I thought the urgency was so much better. We just couldn’t secure the ball and get the rebound.”

After Nebraska went up 48-47 with 15 minutes left, the Huskers immediately gave up an 11-0 run that included three turnovers and three Penn State three-pointers. The Huskers rallied to tie the game at 70 with 6:20 to go on Trey McGowens’ three-pointer, the last of three in a row for NU, but Penn State answered again with five straight points.

The Huskers were beaten badly on the glass, getting out-rebounded 42-29. John Harrar alone had eight offensive rebounds for Penn State on his way to a 10-point, 14-rebound game.

McGowens had 17 points, four rebounds and three assists for NU. Derrick Walker finished with nine points on 4-for-4 shooting, scoring seven points on the second half on hard rolls to the basket as Penn State’s defense followed Allen. Thorir Thorbjarnarson added eight points with a pair of three-pointers.

“Mental mistakes, just throwing the ball right to them, and then a couple where we went back to dribbling in a crowd and dribbling into a pile,” Hoiberg said. “Offensively, to shoot those percentages, it’s been awhile … Unfortunately we just couldn’t string enough good stops together, and when we did get a stop we couldn’t get a rebound.”

{{featured_button_text}} Jake Immink of Fairbury was on a ventilator for more than 120 days, first at Bryan West Campus in Lincoln and then at the Nebraska Medical Center. While he recovered from … END_OF_DOCUMENT_TOKEN_TO_BE_REPLACED