Tropical Storm Henri is expected to become a hurricane by Saturday.

The storm will move north just offshore along the east coast before approaching the Northeast on Sunday afternoon.

As a result, a hurricane watch has been issued along that stretch of coast.

Storm surge forecasts range from 1 to 5 feet depending on the eventual path of the storm.

Henri may produce rainfall amounts of 2 to 5 inches over southern New England Sunday into Monday, with isolated maximum totals near 8 inches.

Finally, swells generated by Henri should increase across much of the east coast of the U.S. today into the weekend. 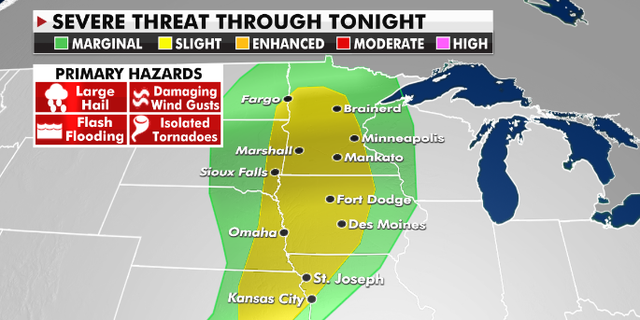 The threat of severe weather on Friday.
(Fox News)

These swells could produce dangerous surf and rip current conditions.

Otherwise, severe storms are forecast in the Plains and Midwest on Friday afternoon and night.

The storm prediction center has issued a slight risk for severe storms along a strong cold front.

The pandemic threw a wrench in many people’s holiday shopping. What used to be trips to stores and markets with the family to find the perfect gift turned into Amazon wish lists and online gift cards. … END_OF_DOCUMENT_TOKEN_TO_BE_REPLACED

Rhonda LeValdo travels from Lawrence to Kansas City for every Chiefs home game, but she’s never actually been inside Arrowhead Stadium. Instead, she stands by a bus stop at the corner of Red Coat Lane … END_OF_DOCUMENT_TOKEN_TO_BE_REPLACED

For eighty years, a story has remained buried under the tales of the great men of Kansas City jazz, from Count Basie to Charlie Parker. Living and playing alongside them was another legend, pianist … END_OF_DOCUMENT_TOKEN_TO_BE_REPLACED