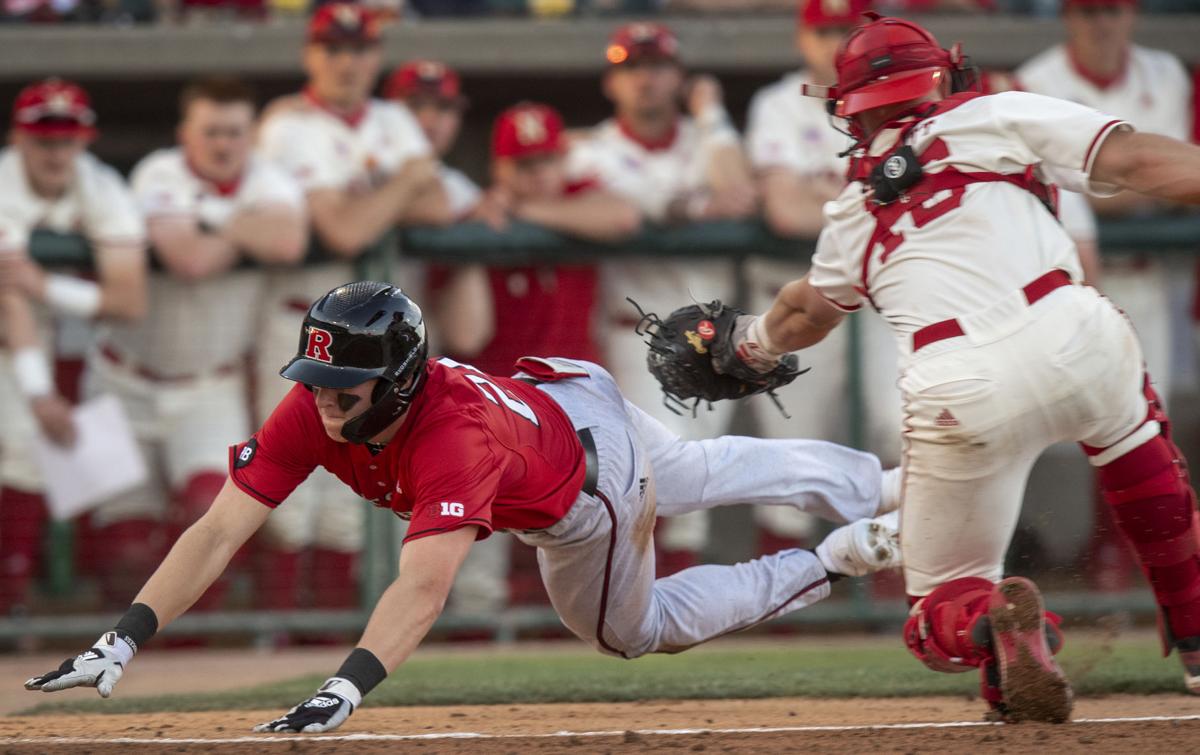 Rutgers’ Ryan Lasko gets tagged out by Nebraska catcher Griffin Everitt at home plate in the third inning Friday at Haymarket Park. 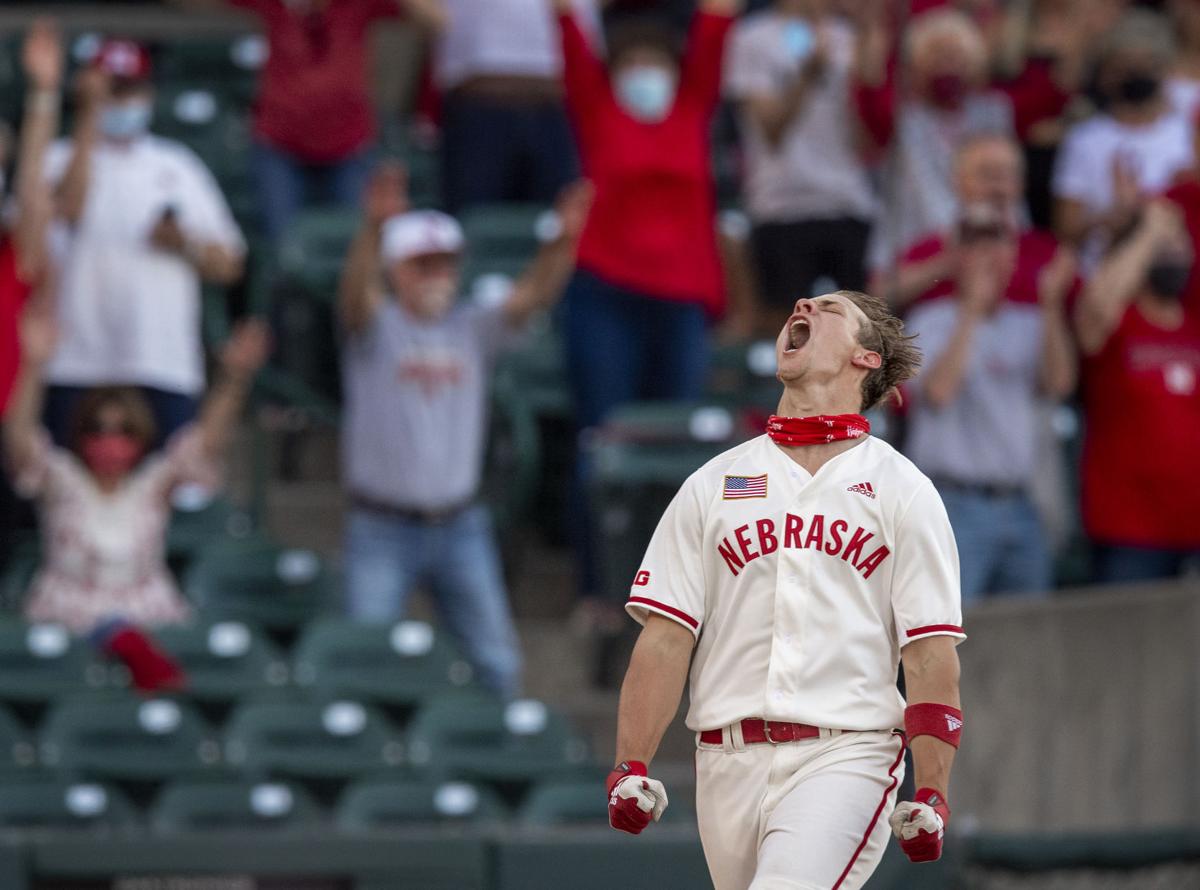 Nebraska’s Joe Acker (5) and the Huskers fans celebrate his inside-the-park home run as he crosses the plate against Rutgers in the third inning Friday at Haymarket Park.

Scoring four runs in the eighth inning off an NU bullpen that had been untouchable for more than two weeks, the Scarlet Knights waltzed into Lincoln and knocked off the No. 22-ranked and Big Ten-leading Huskers 9-4 Friday night at Haymarket Park.

Nebraska had been 13-0 when leading after seven innings this season.

“It was just a sloppy finish to a game where we had a lead, and we had a shot to go finish it off with the guys that have finished it off so well for us this year,” NU coach Will Bolt said. “And it just didn’t happen today.

“They finished it off, and we didn’t.”

After taking two of three games at previously ranked Michigan last weekend, the Scarlet Knights added another pelt to their wall to take some juice out of what was shaping up to be a big weekend across NU athletics. It marked the first time this season Nebraska (20-8) has lost a game by more than three runs. Rutgers is now 5-5 against the top three teams in the league: Nebraska, Michigan, and Indiana.

On a sunny, 86-degree day, just hours after Nebraska broke ground on its shiny new football complex, and with more than 5,000 red-clad fans in attendance thanks to a newly raised capacity at the Huskers’ home park, it was Rutgers that ground NU to a halt after an opening three innings that featured plenty of fireworks.

It took all of two batters for NU to take an early lead. Joe Acker, who would be a central player in the game’s early innings, led off with a walk. Jaxon Hallmark followed with a bunt that turned into a Rutgers throwing error and Acker crossing the plate shortly thereafter.

After Rutgers (15-13) touched up Nebraska starter Cade Povich for two runs on four hits in the top of the third, Acker responded with an inside-the-park home run three pitches into the bottom of the frame.

As the ball bounded past Rutgers center fielder Ryan Lasko, who tried to make a diving catch, Acker motored around second, lost his helmet, crossed the plate and let out a scream before directing part of his vocal celebration at the Rutgers dugout.

A few Rutgers players chirped right back, both dugouts were warned, and it looked like things would be testy for the rest of the night.

But a Nebraska offense that sputtered last week at Michigan State went quiet. The Huskers managed just one hit after the third inning — Jaxon Hallmark’s solo home run in the fifth.

“I think we’re fighting it a little bit,” Bolt said. “The punchouts that we had all seemed to come with runners in scoring position, runners on base where, if we just find a way to move the ball and put some pressure on their defense to make a play (things might be different).”

A tidy summation of Nebraska’s struggles came in the top of the ninth as a pair of spectacular defensive plays by Nebraska led to zero outs and eventually to Rutgers extending its lead.

First, Spencer Schwellenbach picked a tough hop deep in the hole at short before his throw pulled first baseman Jack Steil off the bag. One batter later, NU pitcher Max Schreiber went behind his back to glove a come-backer, but NU couldn’t get the out at second base.

Another come-backer off Schreiber’s foot loaded the bases, and a hit batter kept the line line moving.

Now, Nebraska once again has to bounce back after a disappointing loss. The Huskers were able to do it last week, barely, when they beat Michigan State in 12 innings.

“I think last week our preparation wasn’t as good compared to this week,” NU starting pitcher Cade Povich said. “We came in with good preparation for today, and high energy. But it was just one of those days.

“I don’t think the next two days will be like today.”

Standing in the same location since 1857, the City Market is nearly as old as Kansas City itself. In the 1850s, over three hundred steamboats traveled on the Missouri River—including the Arabia before … END_OF_DOCUMENT_TOKEN_TO_BE_REPLACED

At 6 p.m. this Friday at the Kauffman Center, TEDxKC will have a lineup of ten speakers whose expertise range from a sky full of stars to the key to happiness to a MacArthur Genius. The theme is … END_OF_DOCUMENT_TOKEN_TO_BE_REPLACED

Mesoamericans called it food of the gods. From central Mexico down to Honduras, where the cacao tree grows native, ancient Olmecs, Mayans and Aztecs would gather the oblong fruit and break open its … END_OF_DOCUMENT_TOKEN_TO_BE_REPLACED

The definition of “comfort food” tends to vary depending on who you ask. At two new Brookside restaurants, Brady & Fox and Earl’s Premier, the term applies both to time-honored Irish recipes and East … END_OF_DOCUMENT_TOKEN_TO_BE_REPLACED

The King of Cass County’s bold vision for Harrisonville imploded. Can anyone revive it? It’s 5 pm on a Monday night in downtown Harrisonville. Only one other car is parked in the square. … END_OF_DOCUMENT_TOKEN_TO_BE_REPLACED