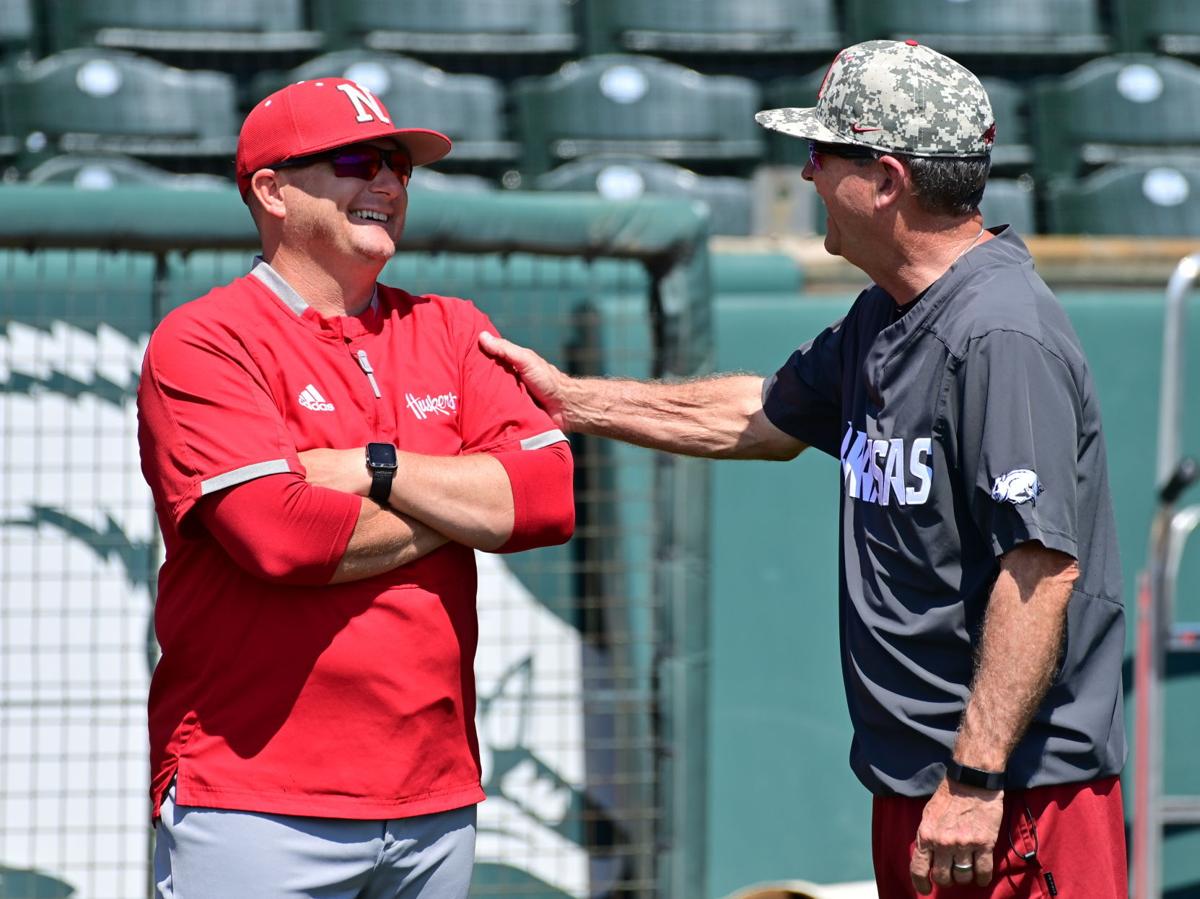 Nebraska’s Will Bolt and Arkansas’ Dave Van Horn chat during practice on Thursday in Fayetteville ahead of the NCAA regional opener on Friday. 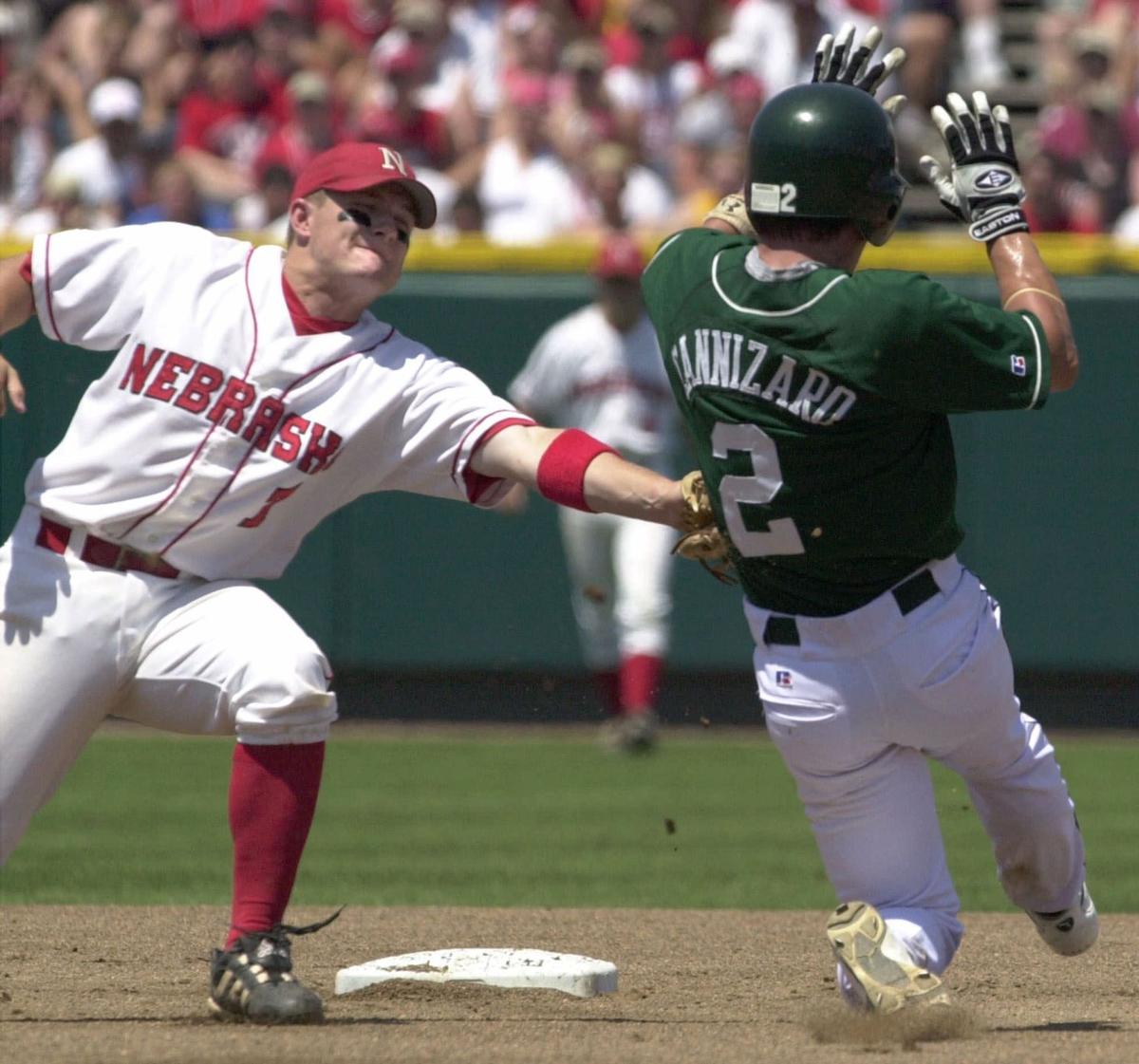 Tulane’s Andy Cannizaro (2) gets tagged by Nebraska’s Will Bolt while trying to steal second in the first inning of a 2001 College World Series game.

The first recruit Van Horn brought to Lincoln back in 1998, not long after he took the Nebraska baseball coaching job, Bolt became a cornerstone in Van Horn’s dramatic rebuilding of a moribund Husker program, the face of NU’s hard-nosed approach.

Now, more than 20 years later, as the men prepare their teams for this weekend’s Fayetteville Regional, Arkansas’ head coach doesn’t see much of a difference in Will Bolt the coach.

“Same personality — gritty, tough, comes to win, wants his team to win, and lets you know about it. And I think (the Huskers) feed off it a little bit,” Van Horn said Thursday. “They’ve got good players, got good pitchers, and they’re doing the little things right — they’re fielding the ball, throwing strikes and getting big hits, and that’s what it takes to win championships. He’s done a tremendous job.”

The Van Horn/Bolt connection is one of the storylines hanging over the weekend, with no guarantees Nebraska and No. 1 national seed Arkansas even face each other.

There remain nine innings of baseball for both teams to play before the mentor can potentially face the mentee. The two spoke briefly at Baum Stadium on Thursday morning as Arkansas wrapped up practice and Nebraska got its workout underway, reminiscing on their seasons and catching up like old friends.

And after Nebraska’s practice, Bolt recalled how Van Horn’s approach to the game has shaped his philosophy as a coach.

“I just had an instant attraction to the way he talked, the way he coached the game. I felt that he was a guy that just seemed to exude confidence and leadership,” Bolt said of being recruited by Van Horn.

The recruiting process started when Van Horn was at Northwestern State and Bolt was a high school sophomore. From there, Bolt learned from Van Horn both on the field and off.

“I would say the recruiting piece of it for sure. Just how aggressive and just how important — he made that known pretty quickly when I started getting into coaching was that you’re only going to be as good as the players you recruit. I think he still understands that fully,” Bolt said.

“And then just the brand of baseball, the style of baseball. I’m not talking about an offensive philosophy, necessarily, but just the day-to-day, show up, work hard, play hard, compete hard type of mindset. That’s what drew me to him in the first place to want to play for him, and that’s the type of player I was, and I saw that work for us, and that’s some of the things I try to implement with my players.”

Van Horn still seeks his first College World Series title, having made eight trips to Omaha between his stops at Nebraska and Arkansas. This year, with Arkansas at 46-10 after a historic run through the SEC, may just provide him the best opportunity to do it — provided he can potentially get past Bolt, who has NU rolling in his second season much like Van Horn did during his second year in Lincoln.

It won’t be the first time Van Horn faces a former player or assistant coach. When you’re in the dugout for nearly 2,000 career games, as Van Horn has been, chances are you’re going to see some familiar faces.

That doesn’t make a potential high-stakes matchup any easier.

“I don’t know how I feel about it. Just happy he’s got a great job, and he’s had a good career leading up to getting the great job. He deserved it, and once he got it he’s taken full advantage of it. He’s where he wanted to be,” Van Horn said.

“I don’t particularly like playing former players and friends and coaches, because there’s always one of us that isn’t going to be real happy at the end of the day.”

Photos: Take a look at the Huskers’ preparation ahead of NCAA baseball tournament play

The King of Cass County’s bold vision for Harrisonville imploded. Can anyone revive it? It’s 5 pm on a Monday night in downtown Harrisonville. Only one other car is parked in the square. … END_OF_DOCUMENT_TOKEN_TO_BE_REPLACED

She says in her long life, the only constant is change, and she knows important changes are coming in Kansas. She’s faced battles/discrimination and stood up for LGBT+ rights throughout her life, and … END_OF_DOCUMENT_TOKEN_TO_BE_REPLACED

She says in her long life, the only constant is change, and she knows important changes are coming in Kansas. She’s faced battles/discrimination and stood up for LGBT+ rights throughout her life, and … END_OF_DOCUMENT_TOKEN_TO_BE_REPLACED

Around 1 am on a Wednesday in early June, large swaths of south KC were awakened by phone notifications and screeching sirens. The forecast had called for a dark and stormy night, but a tornado … END_OF_DOCUMENT_TOKEN_TO_BE_REPLACED

Breakaway Musical Festival August 5-6, 4  pm This festival began in Ohio in 2013 and has since exploded as a touring event throughout the Midwest for electronic-music lovers who don’t want to travel … END_OF_DOCUMENT_TOKEN_TO_BE_REPLACED