For The Weekly Pulse (a revisit of an old Ms. column!), we’ve scoured the most trusted journalistic sources—and, of course, our Twitter feeds—to bring you this week’s most important news stories related to health and wellness.

A rally against abortion bans in Seattle in 2019. (Wikimedia Commons)

In this edition: Mississippi asks the Supreme Court to re-evaluate the constitutionality of Roe v. Wade; the FBI unsurprisingly ignored 4,500 tips against Justice Brett Kavanaugh in 2018; Fauci warns Americans the U.S. is going in the “wrong direction” as COVID cases increase by 300 percent; and key Republican lawmakers and media personalities are now urging conservatives to get the vaccine.

Mississippi ramped up their attack against Roe v. Wade in the brief filed last Thursday. The brief specifically requested the Supreme Court to review the constitutionality of Roe v. Wade and Planned Parenthood v. Casey—a 1992 case that reaffirmed the rights outlined in Roe. The brief states: “Roe and Casey are egregiously wrong. The conclusion that abortion is a constitutional right has no basis in text, structure, history, or tradition.”  There is no mystery surrounding Mississippi’s intentions anymore: Dobbs v. Jackson Women’s Health Organization will decide the fate of abortion rights in the United States.

+ On Thursday, Governor J.B. Pritzker (D-Ill.) signed a law that allows pharmacists to prescribe hormonal birth control to patients. The bill is lauded by reproductive rights supporters as “the common sense approach” and is a huge step forward to increase birth control accessibility. State Rep. Michelle Mussman (D), a lead sponsor of the bill in the house, said the legislation will “increases access to convenient locations all around the state, reducing unnecessary barriers to timely and consistent use of these products, which women rely on to self determine when is the right time for them to become pregnant.”

Today, Illinois becomes one of the first states in the Midwest to provide birth control over the counter, making contraceptives all the more accessible and affordable in our state.

It’s yet another step guaranteeing women have access to the healthcare they need. https://t.co/d7vz87cnQt pic.twitter.com/qEkPuKUCBQ

+ A federal judge has temporarily blocked Arkansas’s ban on gender-affirming care. Earlier this year, the ACLU requested a preliminary injunction from U.S. District Judge James Moody, an Obama appointee. Moody granted the injunction on Monday, July 19, and denied the state’s motion to dismiss the lawsuit. The law was set to take effect on July 28, and punishes physicians for giving or recommending gender-affirming care to patients. Holly Dickinson, the executive director of the ACLU, responded to Judge Moody’s decision:

“This ruling sends a clear message to states across the country that gender-affirming care is life-saving care, and we won’t let politicians in Arkansas—or anywhere else—take it away.”

‘There are more genders than you are aware of. You do not know the mind of God’ — This dad was arrested while speaking out against an anti-trans bill in Arkansas in defense of his transgender son pic.twitter.com/NaWMwg1JWQ

+ Women across the United States opted out of important preventive care appointments like pap smears and mammograms due to concerns about COVID-19. The consequence: Women are not receiving the care they need. Right now, it is unclear how this will impact women’s health in the long run, but for some, the consequences could be devastating, as a missed appointment could result in an undetected STI, pregnancy-related health complications or cancer. COVID-19 exposed many health care inequities for women of color, low-income women and women who face language barriers.

“While these data don’t allow us to know for sure that disparities worsened, it’s concerning that a lot of these comparisons were moving in the direction of worsening the disparities that we know already existed,” said Nora Becker, a primary care doctor at Michigan Medicine, the University of Michigan’s academic medical center, and lead author of the study on women’s preventive care during COVID-19. Becker recommends women contact their providers if they skipped or canceled an appointment in 2020. And Becker encourages providers to reach out to individuals they have identified as high-risk who could benefit most from their care.

+ On Thursday, July 22, seven Democratic senators revealed the FBI failed to fully investigate sexual assault allegations made against Justice Brett Kavanaugh in 2018. Two of the seven senators, Sheldon Whitehouse (D-N.Y.) and Chris Coons (D-Del.), said they received a letter from the FBI last month which detailed over 4,500 tips relating to Kavanaugh and the FBI failed to pursue further action. “If the FBI was not authorized to or did not follow up on any of the tips that it received from the tip line, it is difficult to understand the point of having a tip line at all,” said lawmakers in a letter to FBI Director Christopher Wray.

I’m heartened to see so many people expressing support for my persistence & digging to get answers from the FBI about the fake “tip line” they ran for the Kavanaugh investigation. I also want to debunk some of the falsehoods I’ve heard since the news broke. Here’s the real story: pic.twitter.com/FlBtlBNaIc

+ Fauci warns the U.S. is heading in the “wrong direction” as the seven-day average of COVID cases increases by 300 percent and more than 30 percent of the U.S. eligible population unvaccinated. 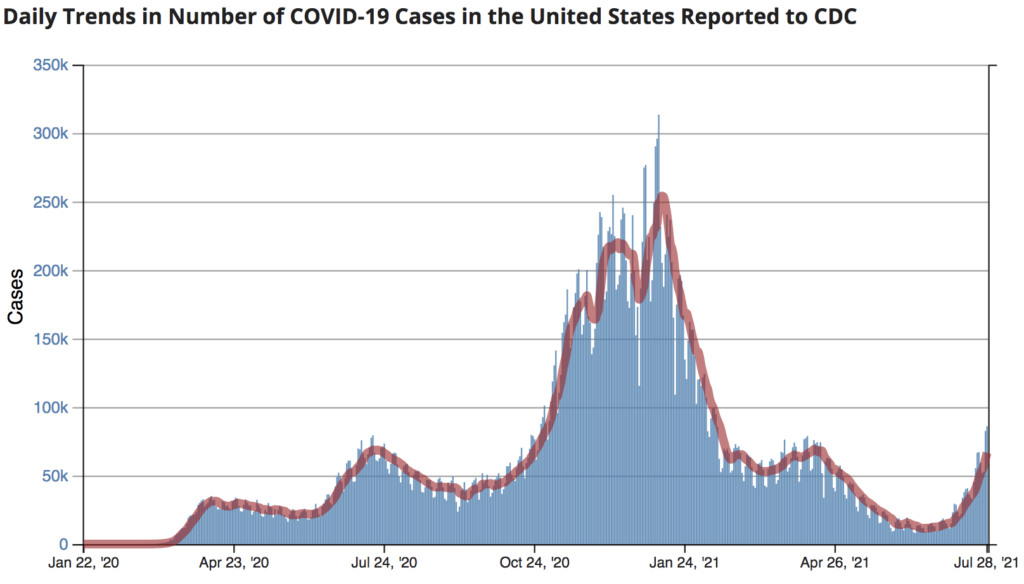 The national outlook is worsening quickly, with a fourfold increase in new cases per day over the last month. (CDC)

+ California will require health workers and state officials to show proof of COVID-19 vaccination or get tested weekly, in an attempt to combat rising cases in the state. According to Gov. Gavin Newsom (D-Calif.), the new rule will affect 246,000 state employees and at least two million health care workers. Even though 62 percent of California’s eligible are vaccinated, infection and hospitalization rates are rising. Newsom said, “An individual’s choice not to get vaccinated is now impacting the rest of us in a profound and devastating and deadly way.”

Not only are vaccine requirements effective in preventing community transition, but they are effective in changing the minds of unvaccinated people. One Kaiser Family Foundation survey of Americans who had been opposed to getting vaccinated and later changed their minds found that mandates—or restrictions on the unvaccinated—were one common reason. 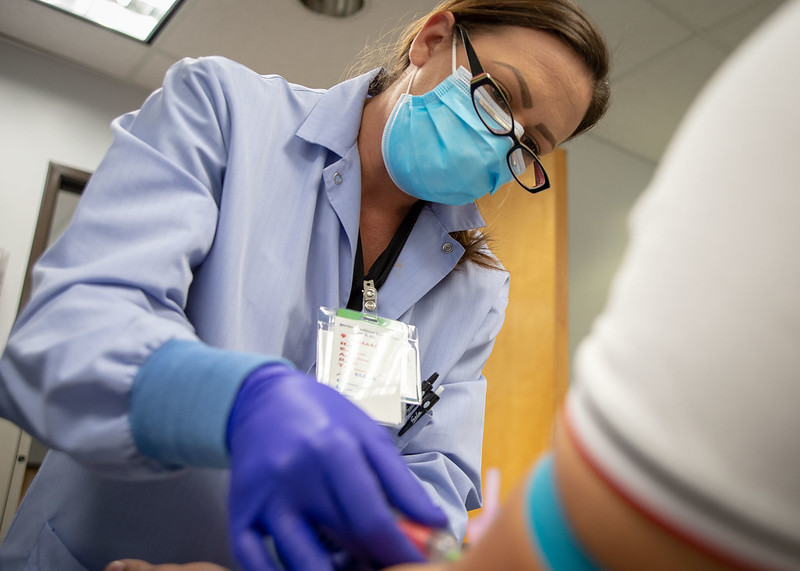 + On Monday, the Justice Department and the Department of Health and Human Services announced that COVID-19 survivors with lingering symptoms, or long COVID, will be protected under the American with Disabilities Act. The guidance specifies that lingering COVID-19 symptoms become long COVID “if the person’s condition or any of its symptoms is a ‘physical or mental’ impairment that ‘substantially limits’ one or more major life activities.” The CDC says it is difficult to identify long COVID because it can have a multitude of mental, physical and social consequences. Workers with long COVID may be entitled to workplace accommodations and other protections outlined in the ADA.

+ CDC data estimates that symptomatic breakthrough cases among vaccinated individuals are rare, but not impossible. The United States has vaccinated more than 156 million people and last week there were only 153,000 symptomatic breakthrough cases, representing approximately 0.098 percent of the vaccinated population. No vaccine is 100 percent effective against infection, but they can prevent severe illness and hospitalization.

“The risk to fully vaccinated people is dramatically less than that to unvaccinated individuals,” said Matthew Ferrari, director of the Center for Infectious Disease Dynamics at Pennsylvania State University. “The occurrence of breakthrough cases is expected and, at this point, is not at a level that should raise any concerns about the performance of the currently available vaccines.”

It is expected that the United States will double down on their testing effort.

Family members of Phil Valentine claim the conservative radio host has changed his opinion on vaccines after being hospitalized for COVID-19. Valentine is responsible for spreading misinformation and anti-vaccine rhetoric on his social media accounts. A statement released by the Valentine family reads: “(Phil) regrets not being more vehemently ‘Pro-Vaccine’ and looks forward to being able to more vigorously advocate that position as soon as he is back on the air, which we all hope will be soon. … PLEASE GO GET VACCINATED!”

+ Joseph Mercola, it’s time for some accountability—researchers say the osteopathic physician in Cape Coral, Fla., is “the most influential spreader of coronavirus misinformation.” It is estimated that Mercola has published over 600 articles on Facebook, casting doubt on vaccine efficacy and safety. With 1.7 million followers on his English Facebook page and one million followers on his Spanish Facebook page, Mercola has a sizable following and many of his claims have been amplified by online commenters. “He has been given new life by social media, which he exploits skillfully and ruthlessly to bring people into his thrall,” said Imran Ahmed, director of the Center for Countering Digital Hate.

THE ANTI-VAXX BUSINESS MODEL:
Spread disinformation about safe & effective vaccines.
Peddle your snake oil as the answer instead.
MAKE BANK. Joseph Mercola is worth over $100M.https://t.co/08KMEelseT
Make no mistake. This is a profit-driven business.

If you found this article helpful, please consider supporting our independent reporting and truth-telling for as little as $5 per month.

Posted on May 25, 2022 Overview is the City’s quarterly newsletter for residents. It includes news, things to see and do in Overland Park, valuable information for neighborhoods … END_OF_DOCUMENT_TOKEN_TO_BE_REPLACED

Photography by Kayla Masisak It’s an odd piece of art in an odd spot. But this kitschy, eye-catching stagecoach placed just perfectly in an oblong oval median in Independence has a … END_OF_DOCUMENT_TOKEN_TO_BE_REPLACED