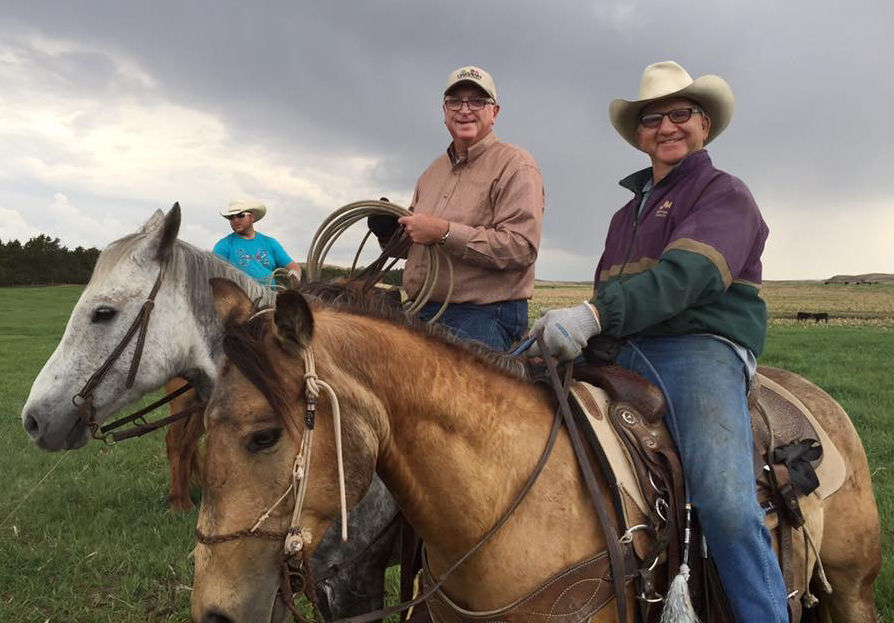 Roger Ryman (left) and Mike Coffman, who worked at Ryman Brothers Ranch in the Sandhills, were close friends for decades. 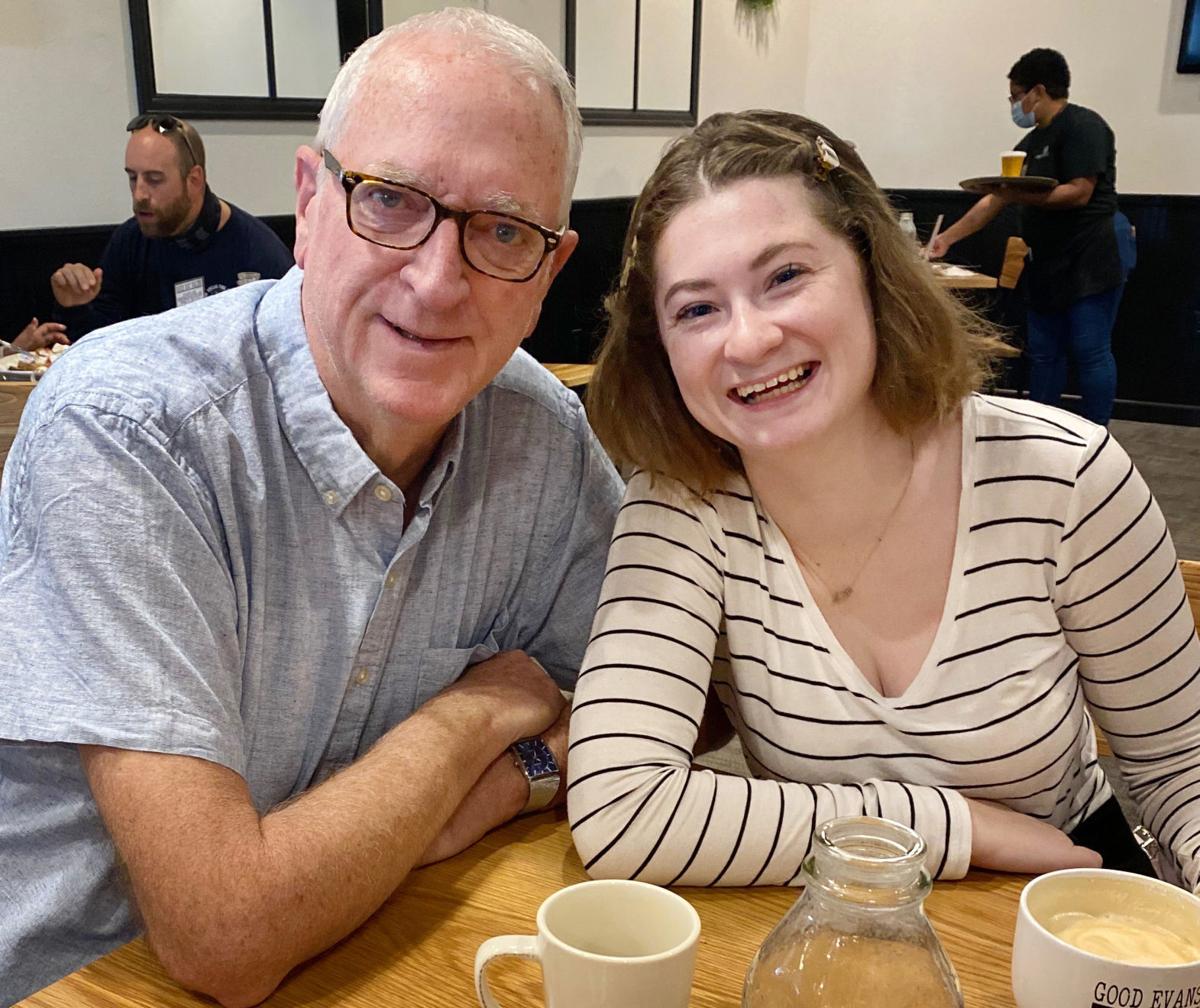 Roger Ryman met his granddaughter, Katelyn Ryman, in September for breakfast to celebrate her birthday. Over 23 years, Roger Ryman wrote letters to his seven grandchildren. They were found among his belongings after he died in mid-October from COVID-19.

Roger Ryman had everything to live for, specifically seven grandchildren — his Magnificent 7 — and their parents. And he had been careful in this time of masks and handwashing and physical distancing.

He could have had 20 years or more to celebrate their birthdays, graduations, weddings and, someday, great-grandchildren.

After ranch life in the Sandhills, then moving from ocean to ocean, Ryman returned to Lincoln in 2016 to reconnect and bond.

Granddaughter Katelyn Ryman got used to seeing her grandfather at all of her events in Omaha — track meets, plays, recitals, holidays.

“He was truly trying to make up for the lost time,” she said. “I think of my upcoming college graduation. I’ll be the first grandchild to graduate from college, and he won’t be there.”

CVS and Hy-Vee both say shots will be available to that age group starting Thursday, and the Lincoln-Lancaster County Health Department will offer them at clinics starting on Friday.

A few days later, his daughter posted on Facebook. “These numbers are not just anonymous strangers,” Cindy Ryman Yost wrote. “This article, this ‘man in his 70s’ was my dad, and he had not even turned 71. My dad was not just the 42nd death in Lancaster County. He was loved by so many.”

He was born in Lincoln, graduated from the University of Nebraska. Then the cowboy in him carried his pregnant wife and daughter to his family’s ranch near Halsey.

But the ranch was sold, and they moved to town. He and his wife divorced, and his dream to live by the ocean and mountains took him to California. Then to the Atlantic coast. Then Arkansas. But when it was time to retire, he made his way back.

Lawmakers advanced the proposal, 39-3, through the first of three required votes. The measure would bar pandemic-related lawsuits against businesses or governments as long as they were following federal public health guidelines.

He drove a courtesy car part time for a dealership. And when COVID-19 surged, he was doing everything he could to be careful, his daughter said.

The day he started feeling ill, he learned he’d been exposed to a co-worker who had tested positive for COVID-19 a week before.

Ryman got tested on a Saturday and got the result Sunday. Positive. Yost talked to him on Monday. He said he was tired, with chills but no fever.

The Marathon Health clinic in Lexington is one of seven the company is opening nationwide as part of a pilot program.

She texted him Tuesday morning, and he didn’t respond. She thought he was sleeping. She drove to his house to drop off soup and chocolate.

She still couldn’t reach him. So she put on her mask and went in, finding him on the floor. Doctors told her he likely died suddenly from a blood clot in his lung, a result of the virus.

If his Magnificent 7 didn’t know how much he loved them by his presence in their lives, they do now: After Ryman died, his family found 23 years of letters he’d written, but never delivered, to his grandkids.

The discovery was bittersweet.

“Those words are hard to read knowing he wanted to be around for as much as he could and he won’t be around for some of the big life events that are coming up between all of us grandkids,” Katelyn Ryman said.

The cost of COVID: Remembering lives lost in Southeast Nebraska

They were teachers and farmers and factory workers and homemakers. They played the piano, fixed old cars, danced to the Beach Boys, cuddled their grandchildren.

They were our co-workers and neighbors and friends. Our parents. Our spouses.

They all have one thing in common. They died from COVID-19, a virus that arrived in Nebraska in March 2020, claiming its first life in Lancaster County a month later.

These stories represent a fraction of the lives lost in Southeast Nebraska, but they are our way of paying respect to each and every one.

We’d like to share the stories of others from Southeast Nebraska who have lost their lives to COVID-19. If you would like to have your loved one added to our online tribute, please email your contact information to: citydesk@journalstar.com

Alan Burr, 73, of Humboldt died on Jan. 13 of complications from COVID-19. Teacher, artist, beloved brother, favorite uncle. “He did what he wanted, when he wanted to.”

Jack Fields, 87, died of COVID-19 on Dec. 8. He spent his career fixing copy machines and making friends and creating memories for his children and grandchildren.

Phyllis “Phyl” Maly, 87, died of COVID-19 on Jan. 14. She was an artist, mother, grandmother, great-grandmother and a woman at home in her own skin.

Beth Smith, 64, died of complications of COVID-19 on Jan. 20. The redheaded woman loved music and parties and adventure and was a loyal friend, sister, aunt and partner.

Lillian “Lil” Gibson, 61, died of COVID-19 on Nov. 2. The dialysis nurse and marathon runner was small but mighty with a big smile and warm personality.

Kevin Hopper, 60, died of COVID-19 on Aug. 19. The easygoing Lincoln native and computer expert loved Star Trek and Star Wars and all things sci-fi and, most of all, his family.

Randy Brinkman, 62, of Lincoln died of COVID-19 on Nov. 30. He loved his family, old cars, working hard and writing love poems to his wife.

Hope McGraw, a 22-year-old crew leader at a York restaurant, died of COVID-19 in January. A fundraiser over a week later raised nearly $1,200 to help her family cover bills.

Julie Koch: She taught us kids to be independent, strong, courteous, respectful and kind. Her pragmatic outlook on life earned her many friends wherever she was living or working. She rarely showed a temper, seeming to always take life in stride.

Wanda Darlene Hedges was a strong woman who raised her family on a farm near Bennet. Sometimes she worked at a nearby grocery store, but she was mostly a full-time mother.

Anna Sales, 69, died of COVID-19 on Nov. 6; four days later her husband Chuck Sales, 88, also died of the virus. The couple loved to bowl, travel, serve their church and listen to Elvis music.

Orva Samuelson, 95, died of COVID-19 on May 22. She and her late husband loved to dance and play cards and after she raised her daughter she became an Avon lady and turned customers into friends.

Tam Mai, 80, died of COVID-19 last May. The man from Vietnam was a protective big brother and a devoted son and grandfather who taught his grandchildren to study hard and be respectful.

Nadene Stull, 94, died Dec. 12 from complications of COVID-19. She lived a full life as a bookkeeper and mother of three sons who later went on to become a lay minister in the Methodist church.

Bryan Wintz, 46, died of COVID-19 on Oct. 4. The longtime LES worker loved to tease his only daughter, go ice fishing and work on projects around the house he built with his high school sweetheart, Jill.

Janet Ann Jodais, a caring mother known for her love of reading, crafting and church life, died Oct. 8 of COVID-19 in Lincoln at age 83.

Albert “Butch” Butts, 79, died on Feb. 14 of complications of COVID-19. He was a hard worker and a kind and generous man who left behind a big family to mourn his passing.

This spring, the Journal Star set out to honor the lives of those lost to COVID-19. The families were eager to share the stories of those they loved.

Betty Srb, a longtime nurse known for her caring and loving personality, died of COVID-19 at a Lincoln nursing home last November at age 95.

Standing in the same location since 1857, the City Market is nearly as old as Kansas City itself. In the 1850s, over three hundred steamboats traveled on the Missouri River—including the Arabia before … END_OF_DOCUMENT_TOKEN_TO_BE_REPLACED

At 6 p.m. this Friday at the Kauffman Center, TEDxKC will have a lineup of ten speakers whose expertise range from a sky full of stars to the key to happiness to a MacArthur Genius. The theme is … END_OF_DOCUMENT_TOKEN_TO_BE_REPLACED

Mesoamericans called it food of the gods. From central Mexico down to Honduras, where the cacao tree grows native, ancient Olmecs, Mayans and Aztecs would gather the oblong fruit and break open its … END_OF_DOCUMENT_TOKEN_TO_BE_REPLACED

The definition of “comfort food” tends to vary depending on who you ask. At two new Brookside restaurants, Brady & Fox and Earl’s Premier, the term applies both to time-honored Irish recipes and East … END_OF_DOCUMENT_TOKEN_TO_BE_REPLACED

The King of Cass County’s bold vision for Harrisonville imploded. Can anyone revive it? It’s 5 pm on a Monday night in downtown Harrisonville. Only one other car is parked in the square. … END_OF_DOCUMENT_TOKEN_TO_BE_REPLACED