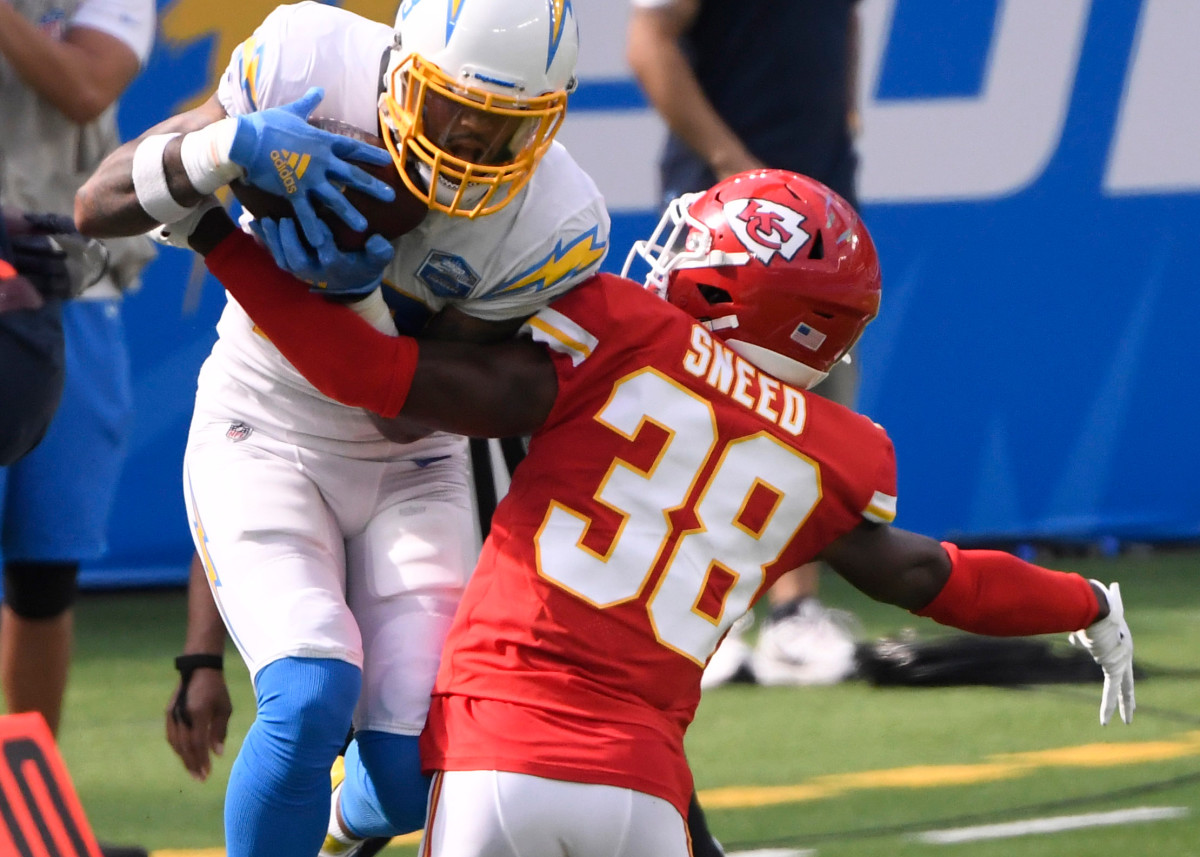 It’s tough to grade draft classes that have only one year of experience under their belt, especially on a team that had a lot of starters back from a Super Bowl-winning roster. Despite one opt-out from a member of the 2020 class and a few guys who were limited in their playing time, the general feeling is that Chiefs general manager Brett Veach continues to get better at drafting with each passing year. Let’s take a look at how the 2020 draft class looked in their rookie campaigns and how they can help the Chiefs moving forward.

This pick got a lot of pushback from Chiefs Twitter and the Pro Football Focus crowd. Some people will never accept Clyde Edwards-Helaire for what he is just because he was a running back taken in the first round. No matter which running back was taken here, they would have received this backlash from this group of people, so it is not necessarily a knock on Edwards-Helaire. If you take a look back at the five running backs who went in the second round, the Chiefs knew they had to take the guy they wanted at pick 32 because the top-tier running back selections wouldn’t be there at the end of round two.

A lot of folks are looking back with hindsight being 20/20 after all the injuries and opt-outs along the offensive line and saying the Chiefs should have taken an offensive tackle with this pick. However, if you take a closer look, there were only two tackles taken between when the Chiefs took Edwards-Helaire and when they drafted their tackle, Lucas Niang, in round three. The Chiefs have a playmaker in Edwards-Helaire who would have passed the 1,000-yard rushing mark if an injury wouldn’t have cut his regular-season short. He was on pace for over 1,500 yards of total offense and his role in the passing game should grow even more in year two. Edwards-Helaire will be a fixture in this offense as long as he’s in Kansas City, and with an improved interior offensive line, he will look even better moving forward. He’s a stud, don’t let anyone else tell you otherwise.

Willie Gay Jr. didn’t see the field as often as most of Chiefs Kingdom would have liked, but he showed flashes of what Veach and the scouting team saw in him throughout his rookie season. Unfortunately, an injury ended his season prematurely and he wasn’t able to play during the playoff run. Gay gives the Chiefs an athletic linebacker option who will almost certainly be starting in teh first week of the 2021 season. The ceiling is still very high for Gay, and that’s why I’m giving him the label of being a stud.

Niang, as mentioned above, was the third offensive tackle to come off the board after the first round. Over the past year, Veach has mentioned how the Chiefs were surprised Niang fell to them at the end of round three. He had a first-round grade, but injury issues caused him to slide. Unfortunately for the Chiefs, Niang opted out of the 2020 season due to COVID-19, so no one really knows how last season would have played out if he had been on the active roster. Most people assume he would have been a backup tackle who could have also played guard if necessary when called upon.

With all of the injuries along the line last year, it would have been nice to have Niang in the mix for playing time. This year, he will likely be thrust into a starting role either at right or left tackle. The Chiefs seem to have high confidence in the player who didn’t allow a sack at any point throughout his college career. Also, since everyone is obsessed with arm length, I am happy to report that Niang’s arms are 34 1/4 inches, a perfect arm length for an Andy Reid tackle. While I can’t say if Niang is a stud or a dud due to his lack of playing in 2020, I can say his ceiling and starting potential are very high going into the 2021 season, which is a win for Veach.

There was a need for Sneed. This man took everyone by surprise in his rookie season and showed he had the chops to be a starting cornerback in the league from day one. He started the season as an outside cornerback with Bashaud Breeland out due to a suspension. He also had back-to-back games with an interception before breaking his collarbone in Week 3 while attempting to get his third interception in three games. He bounced back from the injury and came back to play in the slot for the Chiefs’ defense and looked just as capable playing there. Sneed is one of those Swiss army knife secondary pieces that defensive coordinator Steve Spagnuolo loves to utilize. He was named to the PFF all-rookie team, and the Chiefs have high hopes for Sneed going forward. Certified stud.

The Mike Danna pick seemed like an odd one on draft day, but Veach and the Chiefs’ scouting department know what they are doing. Danna isn’t a starting-caliber defensive end and he will never be a big stat-stuffer, but he is a nice depth piece on the defensive line. When injuries start piling up, the Chiefs can lean on Danna to come in and be a consistent player setting the edge. When given the opportunity in his rookie year, he made the most of it. Danna doesn’t have a high ceiling but he will be the player the Chiefs need off the bench when called upon. For where he was drafted and for what he is, I’m calling him a stud.

The Chiefs traded to get back into the draft in the seventh round to draft Thakarius “BoPete” Keyes. The cornerback was seen as a depth piece who the Chiefs thought they could use as a rotational player while Breeland was on suspension early in the season. Unfortunately for Keyes, he didn’t even get a chance to play much even when fellow rookie L’Jarius Sneed was out for several weeks with an injury. He was able to get the start in Week 17 against the Los Angeles Chargers when all of the Chiefs’ starters were being rested for the playoffs, and he was able to finish the game with eight total tackles. Other than that, he is likely to remain a special teams player. Since he was unable to see the field early in the season when suspensions and injuries could have given him a chance to see some playing time, I’m labeling him a dud after one year. He was a very late-round selection and it is only one year, so there is time for Keyes to become a rotational contributor down the road.

Overall, this looks like a very successful draft for Brett Veach and the Kansas City Chiefs. Any time a team can get three starters from one draft class (with Niang being a potential fourth starter heading into 2021 as well), that would be considered a home run draft. Veach was also able to add starting punter Tommy Townsend and rotational defensive lineman Tershawn Wharton via free agency after the draft. The 2020 class was filled with contributors, and that’s all you can ask after year-one evaluations from a draft class. Taking into consideration the Chiefs were on a “Run It Back” campaign and a lot of their team from the 2019 Super Bowl championship squad was back, this makes it even more impressive that they were able to land players who were able to contribute in their first season. This should give the Chiefs fans confidence with Veach and the front office heading into the 2021 draft.

Read More: Studs or Duds: Looking Back at the Chiefs’ 2019 Draft

Photo courtesy of Charlotte Street Foundation Not Quite Fatal A group show of seven artists whose practices include printmaking, sculpture, and drawing, Not Quite Fatal was … END_OF_DOCUMENT_TOKEN_TO_BE_REPLACED

In the depths of the pandemic lockdown, when people around the world were feeling isolated and depressed, a group of Kansas City beer geeks started a group called Quarantined Beer Chugs. It was a … END_OF_DOCUMENT_TOKEN_TO_BE_REPLACED

Perhaps I’ve had cachete tacos in Kansas City before and not realized it. They go by a couple other names—cabeza, barbacoa. In Spanish, cachete means “beef cheeks” (one part of the cabeza) and it is … END_OF_DOCUMENT_TOKEN_TO_BE_REPLACED

Posted on January 25, 2022 City Council has approved a new pilot program allowing many Overland Park residents to raise chickens. Under the program, residents will be able to … END_OF_DOCUMENT_TOKEN_TO_BE_REPLACED