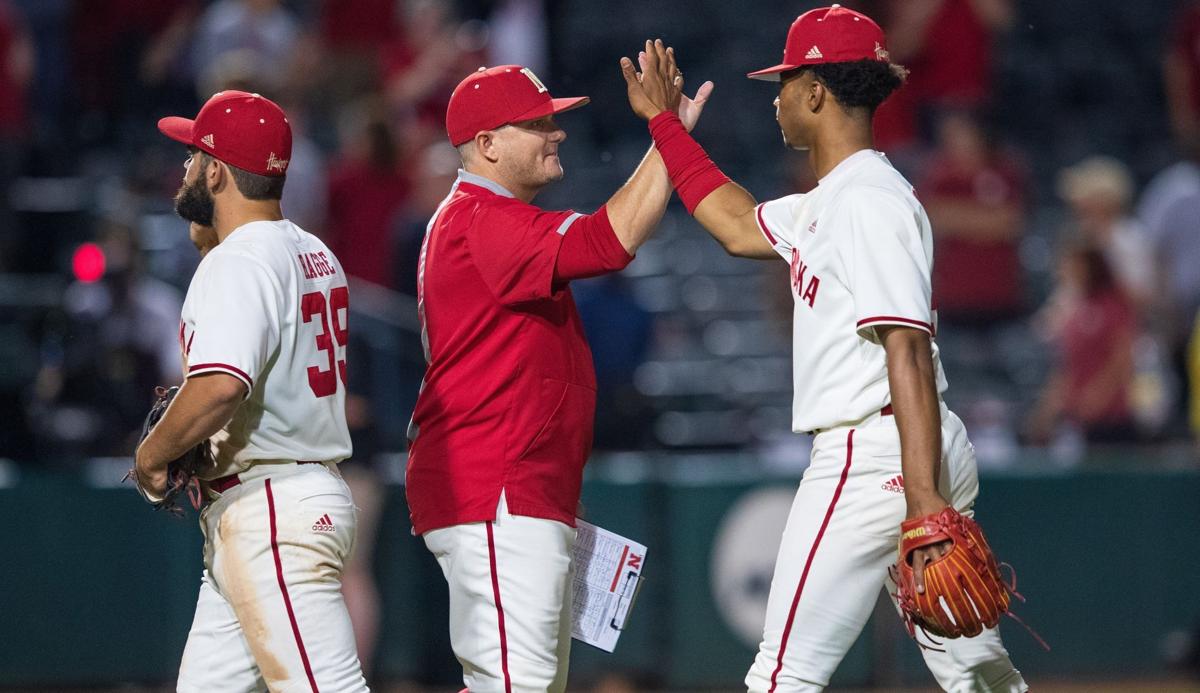 Nebraska’s Will Bolt greets players Brice Matthews and Mojo Hagge after an 8-6 win over Northeastern in their NCAA regional game on Friday in Fayetteville. 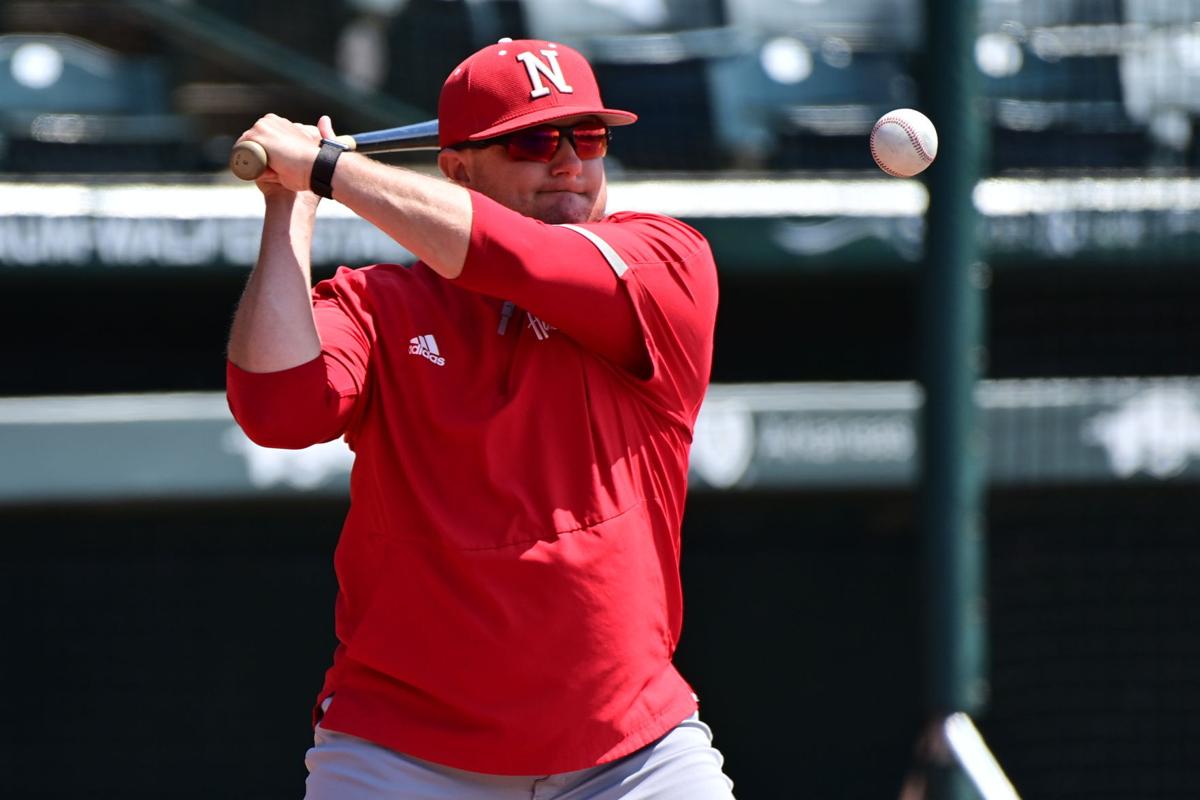 Nebraska athletic director Bill Moos understands the nature of at least one discussion regarding Will Bolt.

You know the one. The second-year Nebraska baseball coach already has made a sizable impression both on the Husker fan base and the national scene. So how is a Big Ten school going to hold on to a head coach who almost certainly will be courted by strong programs in warm-weather conferences?

This clearly has the makings of an ongoing discussion.

“I came to Nebraska because it’s a destination, and so did Scott Frost and Fred Hoiberg,” Moos said Wednesday, referring to Nebraska’s football coach and men’s basketball coach, respectively.

“And so did Will Bolt,” Moos added. “That brand is powerful, and I don’t care what sport you’re talking about. Now, having said that, you don’t just turn your back on taking care of your coaches. Throughout my career, I have a record of rewarding winners. When you have the right coach and the right formula, you take care of that coach.”

Playing a Big Ten-only schedule this season, Nebraska captured the conference championship with three games to spare — even though the Huskers weren’t picked in the preseason by league coaches to finish among the top six.

After winning the Big Ten, Nebraska, using a mix of players from the Darin Erstad era and talented newcomers recruited by Bolt’s staff, roared into the Fayetteville Regional as the No. 2 seed and pushed top-ranked and No. 1 overall seed Arkansas to the absolute limit before falling 6-2 in Monday’s regional finale. The Huskers on Sunday night defeated the Razorbacks 5-3 to force the deciding game.

“Will has brought a culture in here of the same kind of grit that he had as a player, as I understand it, and that’s the way he coaches,” Moos said. “His guys have bought in. He’s an excellent recruiter, and we’re not going to fly over good prospects to go find other ones. There is baseball talent in the state of Nebraska, and Will knows it.”

Along those lines, you hear excitement in Bolt’s voice as he discusses his 14-player 2021 recruiting class, which indeed has a significant in-state flavor. It’s highlighted by Elkhorn pitcher Drew Christo, son of former Husker quarterback Monte Christo. The younger Christo, 6-foot-5 and 230 pounds, has been ranked as high as No. 44 in the country, according to Perfect Game.

What’s more, pro scouts have taken a keen interest in outfielder Chase Mason, a multi-sport standout for Viborg-Hurley High School in South Dakota. He’s considered the top baseball player in the state and easily among the top 50 players in the nation in his class.

Moos, of course, has taken note of all of it.

“I’ve always said it’s one thing to get there, to the top, and it’s another to stay there,” he said. “To stay there, you’ve got to reinvest in success.”

Moos in the coming week or so will sit down with Bolt and discuss the season. That’s standard practice for an AD.

“We look at the whole program and it’s my job to say, ‘Where can I help you? Let’s look at scheduling, let’s look at everything,'” Moos said. “That conversation will include (coaching) personnel and all of that. It will include facilities. We have a really nice baseball facility at Haymarket Park, but it needs a little updating — locker rooms and stuff.”

It’s very possible Bolt’s salary will get a little updating. My dad always told me to avoid spending other people’s money, so I’m not going to delve too deeply into what Moos should do here. Bolt’s annual salary is $300,000, which last season ranked fifth among Big Ten head coaches. Michigan coach Erik Bakich’s $806,289 annual pay topped the list, followed by Rick Heller at Iowa ($376,500).

Bakich, of course, guided the Wolverines to the CWS championship series in 2019.

Nobody’s saying Bolt should make $800,000 per. But, yeah, a hefty raise likely is in order after Nebraska finished 34-14 and stood toe-to-toe with the best team in the nation.

“We didn’t get the best draw,” Moos said of the NCAA Tournament field. “I don’t think we were treated with respect. Part of that is the Big Ten’s doing in not allowing a nonconference season. But you never heard Will complain. And our players, they were focused. Will is excellent at keeping things on target.”

Nebraska was dialed-in hard in Fayetteville. Suddenly, Husker athletics fans had something to feel good about. They embraced a team that essentially always played hard and with discipline. Bolt has low tolerance for his team ever getting out-toughed.

“Man, when we came back and beat Arkansas, that’s the stuff legends are built on, and Will hasn’t even completed a full season,” Moos said.

Bolt’s bunch, though, made the most of it. Boy did they.

“It’s my belief that it’s far more difficult to be the hunted than it is the hunter, and we are now the hunted,” said Moos, wearing a proud smile.

All the more reason for the AD to help as much as he possibly can.

Photos: Game 7 in Fayetteville — Huskers and Razorbacks battled for trip to Super Regionals

Oktoberfest You won’t go thirsty at Kansas City Bier Company’s annual Oktoberfest, which returns to Crown Center on October 7 and 8. Among the offerings are traditional lagers in the style of Munich … END_OF_DOCUMENT_TOKEN_TO_BE_REPLACED

When you think about wine, do you picture Missouri? If not, a new documentary by TasteMAKERS hopes to change your mind. “I fell in love with Missouri wine early on,” says Cat Neville, the … END_OF_DOCUMENT_TOKEN_TO_BE_REPLACED

Photo by staff. Ashton Bethel started making home decor during the pandemic as a hobby. Now, she has her own business: High Noon Pottery (@highnoonpottery). Typically, Bethel … END_OF_DOCUMENT_TOKEN_TO_BE_REPLACED

You can never tell the secrets a tortilla holds. I am not referring to what this deceptively plain wrapper carries between its folds: the al pastor licked with heat and pineapple or some impossibly … END_OF_DOCUMENT_TOKEN_TO_BE_REPLACED

Here are nine great things to do in Kansas City the weekend of September 29 to October 2, including the biggest barbecue in the world, a mashup of Oktoberfest and Dia de los Muertos and the Violent … END_OF_DOCUMENT_TOKEN_TO_BE_REPLACED