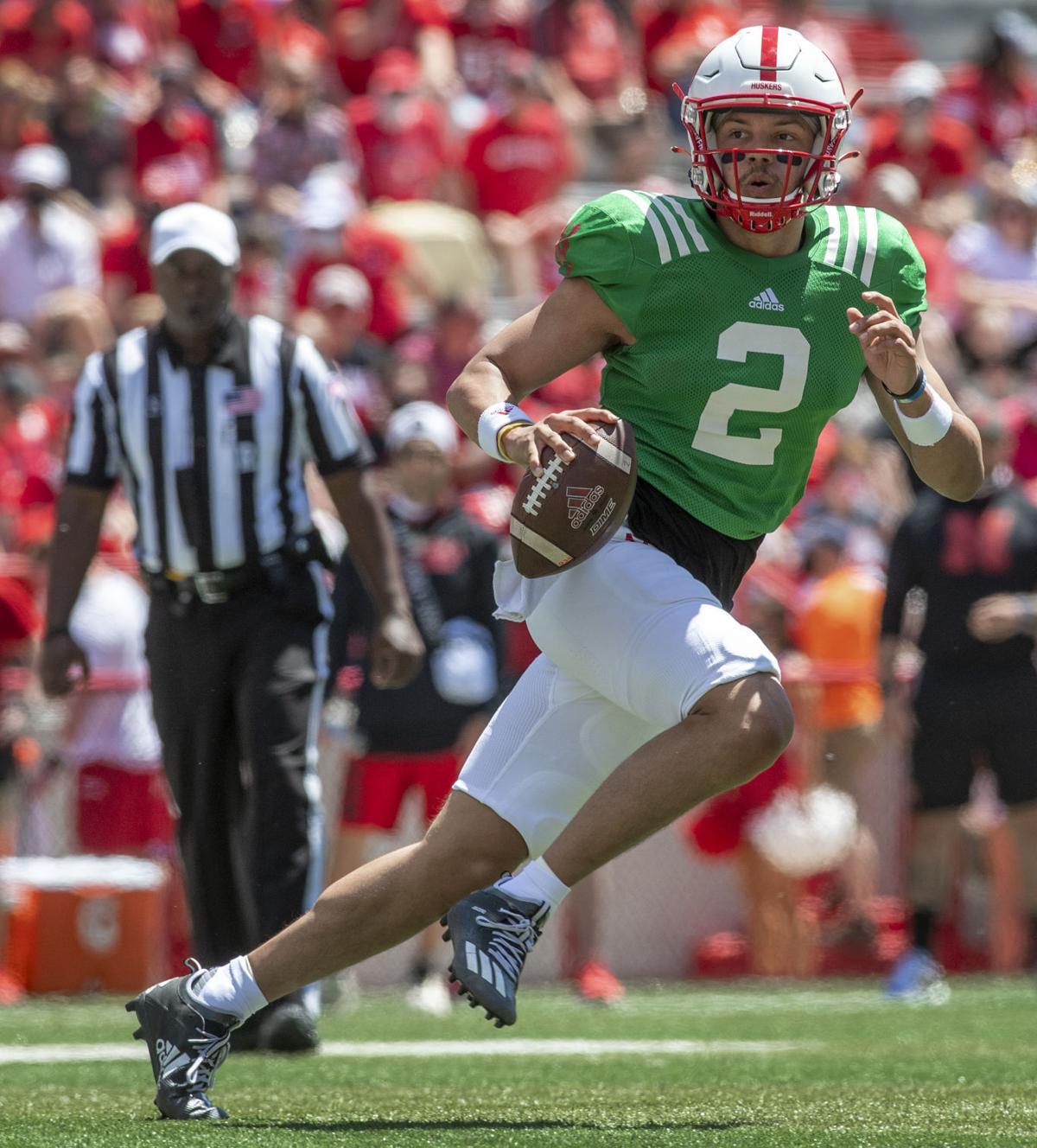 Red Team quarterback Adrian Martinez scrambles around looking for an open receiver in the first quarter during the Red-White Spring Game on Saturday at Memorial Stadium. 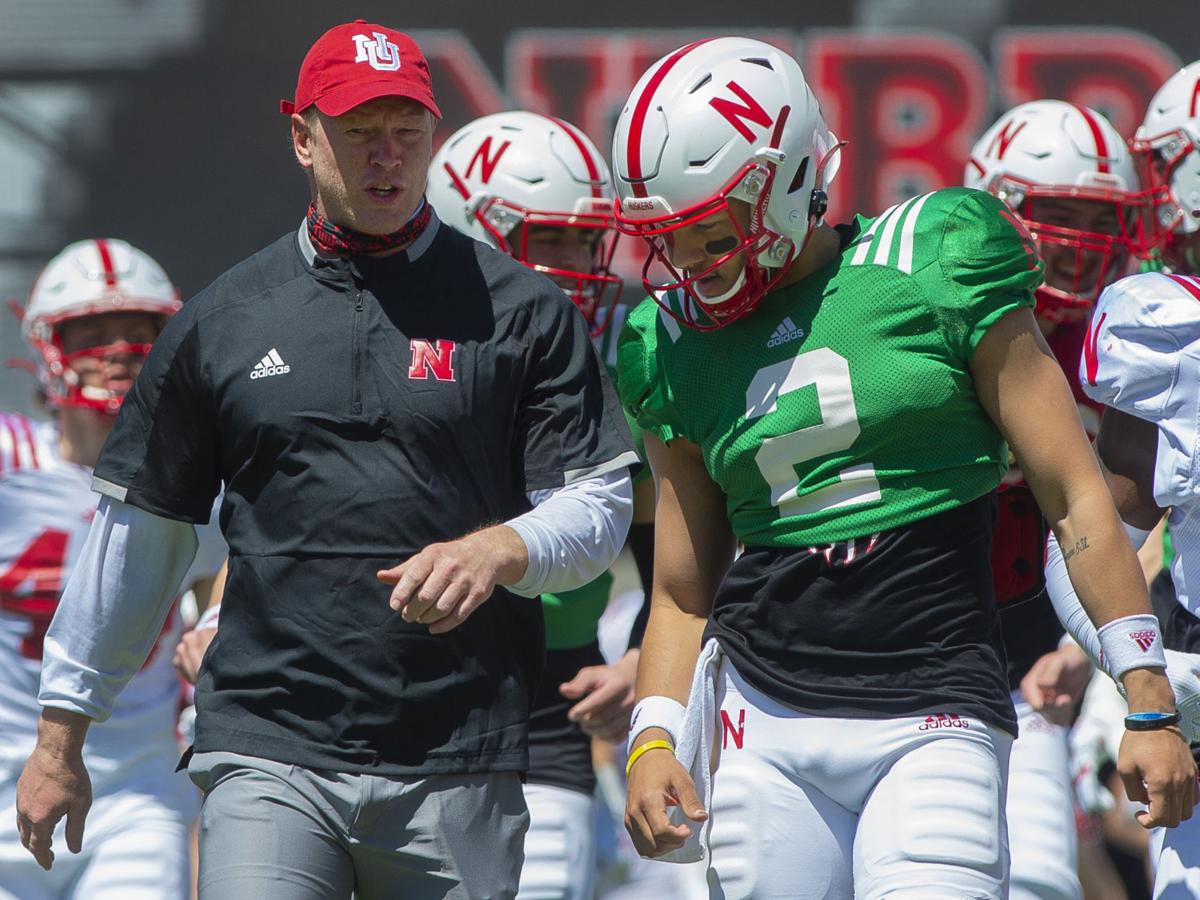 He grew up before our eyes.

You know how this stuff goes — usually pretty quickly.

Nebraska quarterback Adrian Martinez will graduate Saturday in a ceremony at Memorial Stadium. Let that sink in.

It took him only 3½ years to finish his bachelor’s degree.

Not all has gone as planned for him in the football realm — he’s 11-16 as the starter — but he always stuck to his school plan.

“It’s been a heck of a semester,” Martinez told the Journal Star on Saturday, noting he took 18 credits this spring.

A business management major with a minor in economics, Martinez plans to begin work on his MBA this summer.

He likely won’t have trouble finding a “real world” job whenever his football career is finished. But let’s be clear: If he puts together a consistently strong 2021 season, the NFL will be a viable option. There’s no doubt in my mind on that.

The 6-foot-2, 220-pounder looked quick, fast and sharp in Saturday’s Red-White Spring Game. The key for him in 2021 will be taking care of the ball. He has thrown 14 touchdown passes against 12 interceptions the last two seasons, and fumbles also have been an issue.

But this isn’t the kind of person you count out.

Think about being a four-year starting quarterback in a collegiate program like Nebraska where the position is scrutinized as closely as anywhere in the country — and I mean anywhere.

Think about the demands on his time and energy from a football standpoint, and even from a media standpoint.

Think about the cool and even manner in which Martinez handles it all, including the wickedly harsh criticism he receives on social media.

Part of the gig, he’ll tell you.

I could be wrong, but he doesn’t strike me as a complainer. I mentioned to him Saturday that completing 18 credit hours while working through the grind of spring football must have been challenging. He couldn’t have had much time for anything other than school and football.

Bottom line, “It’s really fulfilling to be done and feel like I’ve had my best spring here as a football player and as a student,” he said. “That’s really the accumulation of a lot of hard work.”

A graduate of Clovis West High School in Fresno, California, he didn’t participate in formal graduation ceremonies there because he left school a semester early to begin his college playing career.

“So, now, I’m finally getting to walk in front of my family, in Memorial Stadium,” he said. “A lot to be proud of.”

Life moves incredibly fast. He hasn’t thought a lot about what Saturday will feel like for him, surrounded by fellow graduates as former Nebraska head coach Tom Osborne delivers the commencement speech on the field that bears his name.

“It’ll hit me then,” Martinez said. “It’s hard to believe it’s already been this long and I’m graduating. It’s nuts. I don’t have much time left.”

He said earlier this spring that “it’s definitely open” whether he will take advantage of the extra year of eligibility and return in 2022.

He has plenty to think about before making that sort of weighty decision.

“I think that’s why I originally got into business, because it’s so broad,” he said. “It can offer me a lot of opportunities. I’ve always thought about being an entrepreneur and starting my own business. But I also want to be a CEO. I want to be a leader in whatever industry I end up in. That’s really the thing that matters the most to me. Once I find that thing, I’m just going to drive and drive and get to the top.”

If you’ve ever watched Martinez at a podium taking questions from Nebraska’s large media contingent, it’s easy to imagine him leading meetings in a board room. Notice how he looks reporters in the eye and gives thoughtful answers. But also notice how he avoids letting reporters steer him in directions that don’t necessarily apply.

He does it with an unmistakable sense of calm and class.

He told reporters following the Red-White Spring Game that his foremost emphasis this spring has been elevating his leadership. He wants to be encouraging. He wants to drive the unit through his performance and his mindfulness of teammates’ needs.

You have to think teammates will be impressed by their quarterback’s work in the classroom. It only adds to his credibility.

He’s a legitimate dude, all right.

“Part of it is my experience here and kind of a role I’ve stepped into and tried to fulfill, just attacked it,” he said. “I know guys will respect the work I’m putting in. They see me studying my tail off, getting work done. I put in the quality time. I think that stuff matters.

“It’s all worth it. I think the hard work will pay off.”

Of that, I have absolutely no doubt.

Photos: All of the sights from the return of the Red-White Spring Game at Memorial Stadium

Jared Wolfe’s original plan was to call his barbecue pit Lone Wolfe. That, he quickly came to feel, would be living a lie. “I didn’t feel like it was a good fit, to be honest,” he says. “I … END_OF_DOCUMENT_TOKEN_TO_BE_REPLACED

Posted on January 18, 2022 The City of Overland Park will begin an engagement phase of a new small business rescue program scheduled to launch in Spring 2022. The Overland … END_OF_DOCUMENT_TOKEN_TO_BE_REPLACED

Posted on January 13, 2022 The Overland Park Crisis Action Team has hit the ground running in 2022, and there’s already a new four-legged team member on board. The behavioral … END_OF_DOCUMENT_TOKEN_TO_BE_REPLACED