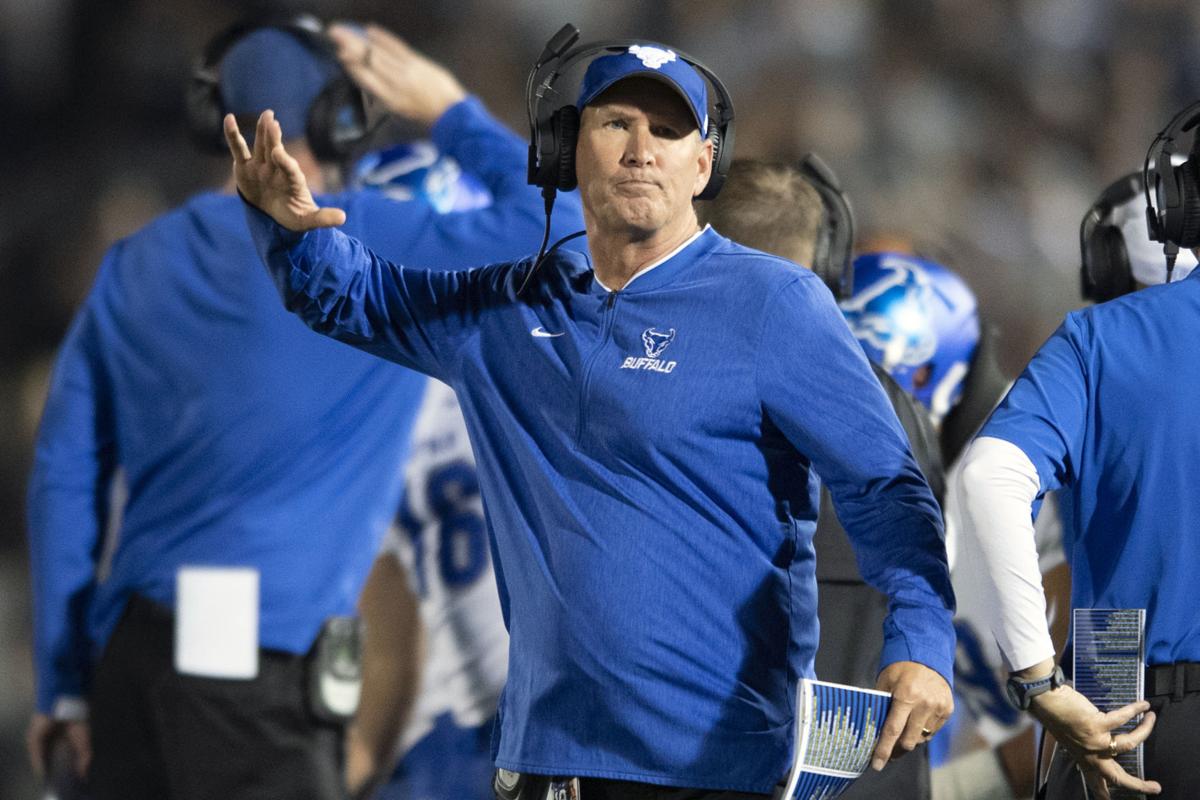 After raising Buffalo’s profile in the MAC, Lance Leipold will take on his biggest challenge yet — rebuilding Kansas’ football program.

New Kansas head coach Lance Leipold is introduced to the media during a news conference earlier this month in Lawrence, Kansas.

It had to be asked delicately.

I mean, we’re talking about a head coach who had a record of 109-6 in eight seasons at Division III Wisconsin-Whitewater. Then, after a couple of rugged seasons as the University of Buffalo’s coach, he was 30-16 in his final four years there. And now? Well, earlier this month, the 57-year-old took over a Kansas program that has lost all but seven of 105 conference games during the past 12 years.

How much of a mental adjustment will he have to make to gird for rough times, because they’re almost bound to happen?

“I guess if you ever get used to losing, you’re in trouble,” said Leipold, the on-campus recruiting coordinator at Nebraska during the latter stages of the Frank Solich era who also once served as offensive coordinator for the defunct Nebraska-Omaha program.

He chooses his words carefully. He’s been that way since I’ve known him — dating to those days in the early 2000s at Nebraska. He fully understands the nature of his present challenge. Kansas lags behind in facilities, fan support and money. He succeeds Les Miles, who was 3-18 overall and 1-16 in the Big 12. Ouch.

Leipold has won everywhere he’s coached. If he can win at Kansas, well, even though he’s staring down the barrel at age 60, there might still be one more big job left for him before he retires. He’s a young 57 and came awfully close to landing the Illinois head coaching job, not to mention a couple of others.

“We understand that we’re under a rebuilding process here — a building process,” Leipold said last week during an appearance on “Early Break” (93.7 FM) with yours truly and Jake Sorensen. “It’s been awhile — since coach (Mark) Mangino, really — that there’s really been consistency here.”

Mangino was 50-48 at Kansas from 2002-09. He had it going well enough to steamroll Nebraska 76-39 in 2007 in one of the most memorable Husker games I’ve covered in a quarter century. It was memorable largely because the Jayhawks could’ve scored 100. The headache was massive that day as I pondered how to put such a debacle into proper perspective.

Mangino was practically Bear Bryant compared with the head coaches who succeeded him at KU: Turner Gill (5-19), Charlie Weis (6-22), David Beaty (6-42) and Miles, who departed the premises amid accusations of inappropriate behavior toward female students during his head-coaching tenure at LSU.

Enter Leipold, a genuine straight shooter. You’ll see him be described as humble, serious and sharp. He’s all that. The last thing Kansas needs right now is another circus, another reach of a hire. This wasn’t a reach. This was a safe choice. A solid choice. Don’t be surprised if it becomes a home run.

Know this: Although Leipold has an unassuming manner, a fire to achieve burns within him.

“I’m not one for moral victories,” he said. “But you still have to consider other ways to gauge success and progress. And those are things we’re going to have to do. But I don’t enjoy losing. I don’t take it really well.”

This is where Leipold brings up his days at UNO. I remember those days in part because he called me once on a Sunday morning wondering where he could find a Lincoln Journal Star in Omaha. I had no idea. Lance set out to find one on his own. He called me about four hours later and said he indeed located a batch. Hey, the guy doesn’t quit.

That’s the sort of mentality a coach has to have. He coached running backs under former UNO head coach Pat Behrns in 1994 and 1995, when the program was 1-10 and 3-8. In 1996, though, the Mavericks went 10-2 and finished first in the North Central Conference.

“In the last eight years I worked at UNO — in two different stints in between working in Lincoln — we won six conference championships,” Leipold recalled. “But the 1-10 to 10-2 seasons, I felt those were the most rewarding and fulfilling times I’ve had as a football coach, until I went to Buffalo. I felt that being on the ground floor of building a program, implementing things and watching them become successful — and then maintaining the success — is something that I’ve always really enjoyed.”

Leipold, who has a six-year, $16.5 million deal at Kansas, retains a lot of connections in Nebraska. Yes, he’ll recruit the state. That’s something to watch. He harkened to his days working for Solich (2001-03). Remember, had he not taken over at Kansas, he would’ve led Buffalo into Memorial Stadium on Sept. 11.

“I was in a small office, in a little cubby, sharing it with the recruiting secretary and doing things to make sure I’m disseminating information,” he said of his time at NU. “It’s not like I was involved in day-to-day game-planning.”

Had he brought Buffalo to town in September, “I think there would’ve been a moment of small reflection and really of disbelief that I’m actually leading the opposing team to have an opportunity to play there.”

He would’ve expected to beat Nebraska. I wouldn’t bet against him getting Kansas on the right track.

Continental Siding's Alec Cook and Jerry O'Neal in the spot voted Best TV Commercial in KC When an owner is the face of his company, it’s hard to replace him in marketing after he … END_OF_DOCUMENT_TOKEN_TO_BE_REPLACED

Posted on August 19, 2022 The City of Overland Park is launching a new incentive to ensure snow crews are prepared to keep City streets safe this winter. During the 2022-2023 … END_OF_DOCUMENT_TOKEN_TO_BE_REPLACED

Continental Siding's Alec Cook and Jerry O'Neal in the spot voted Best TV Commercial in KC When an owner is the face of his company, it’s hard to replace him in marketing after he … END_OF_DOCUMENT_TOKEN_TO_BE_REPLACED

Posted on August 16, 2022 As the City Council continues to consider the 2023 Budget, you have two upcoming opportunities to weigh in on the budget.  In addition to the … END_OF_DOCUMENT_TOKEN_TO_BE_REPLACED