St. Louis resident Colin O’Brien recently launched a dating website and the site has just one eligible bachelor on it: himself. And so far, his website DateColinOBrien.com has been a smashing success.

He says he got the idea for the website from a joke his friend A.J. used to make about how he wanted to be the only single male on the crowded internet dating sites. A.J. never followed through, but O’Brien did.

“With COVID and years of attempts on dating apps to find something that was working that just completely failing, I decided why not just try to do it,” O’Brien said when we talked to him the other day. “Because at least it would be funny and get a kick out of it, and at best I’ll actually meet somebody.”

O’Brien calls himself “kind of a hammy guy” who doesn’t mind attention. This is a very good thing, because DateColinOBrien.com has been going wild on the internet.

His site first caught a bunch of attention when it was featured on TikTok, where it got a quarter of a million views and he had women from all over the world hitting him up for a date. But he started finding plenty more fish in the local sea when he posted a link to his site on the “Date Ideas & Things To Do In STL” Facebook page.

The site went crazy from there and that post currently has over 3,000 “likes,” over 1,000 comments and over 900 shares. Just in the past few days, he’s had more than 150 women reach out to him saying they’d like to go on a date with him.

One look at DateColinOBrien.com and it’s easy to see why so many people are eager to help the guy find a date or go out with him on one. He presents as lovable, sincere, enthusiastic and a bit dorky, but in the best way.

The site includes photos, a bio, stats and even testimonials singing his praises and they’re all hilarious. In addition to his height, weight, age and tax bracket, O’Brien supplies his zodiac sign (Taurus), his COVID vaccination brand (Johnson & Johnson) and his Harry Potter House (Gryffindor). 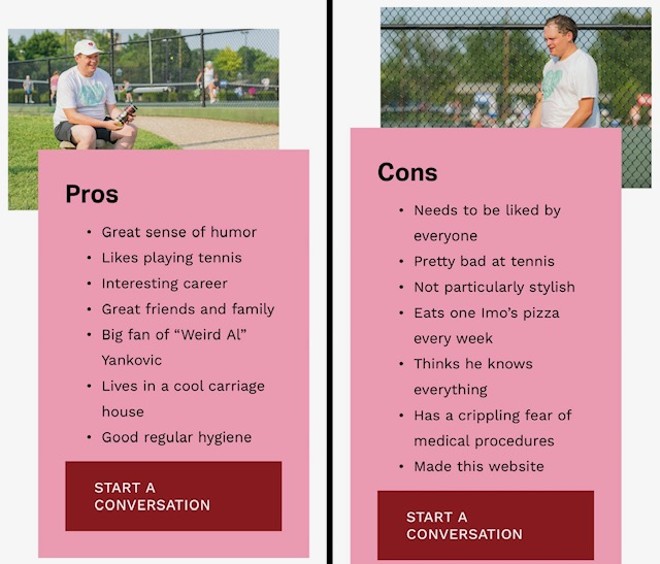 He says he’s tried to be very open and upfront about who he is on the site because he’s “definitely interested in finding true love and finding a partner.” And that includes being honest about his “potential red flags” like how he’s usually a pretty busy guy. He’s a producer for St. Louis’ popular Shakespeare Festival, so he’s super busy during the entire month of July, for example, when he often works 100 hours per week.

Acknowledging factors like these, he says he’s looking for someone with a bit of independence and someone who doesn’t mind meeting him and joining him in hanging out with other people, too, as he’s “very social.” But he’s not too particular with what he’s looking for in a partner. He says he’s trying to approach dating with an open mind and not a ton of perimeters because he’s learned that he’s not exactly sure what he wants. But he knows he wants sparks when it comes to conversation.

“I’d love somebody that I feel like I can talk to forever,” O’Brien says. “Somebody where there’s conversational chemistry and fireworks in that department. That, to me, is the number one thing.”

Here are some other Colin O’Brien facts we learned in our interview that you might want to know if you’re deciding to date him:

O’Brien also says that he orders sausage and pepperoni on his Imo’s Pizza because “You can’t be fancy with an Imo’s pizza, you just gotta let it be what it is.”

The same theory seems to apply to O’Brien, himself. Just let him be what he is and he will shine.

Email the author at jaime.lees@riverfronttimes.com

2021 Plaza Lighting Ceremony | Thursday, November 25 The Country Club Plaza will celebrate its Lighting Ceremony on Thanksgiving. It has been a local tradition for almost 100 years and started … END_OF_DOCUMENT_TOKEN_TO_BE_REPLACED

eep in the downtown headquarters of the Kansas City Police Department, there’s a roll of microfiche that spits out a stack of copy paper a full five inches thick. The file is marked “Roland T. Owen” … END_OF_DOCUMENT_TOKEN_TO_BE_REPLACED

When Tayanna Nelson and her husband started looking for a wedding photographer, they searched high and low for an inclusive photographer. “Everywhere I turned, people in our city had a stacked … END_OF_DOCUMENT_TOKEN_TO_BE_REPLACED

Here’s a round-up of Kansas City restaurant news for December 2021, including an exciting new lounge in the basement of the Hotel Kansas City and three big announcements in Westport, headlined by a … END_OF_DOCUMENT_TOKEN_TO_BE_REPLACED

Maverick Hiu, a Kansas City area native, is coming back to his hometown this week and bringing an entire Broadway troupe with him.  Hiu, who was born in Overland Park and lived there most of his … END_OF_DOCUMENT_TOKEN_TO_BE_REPLACED