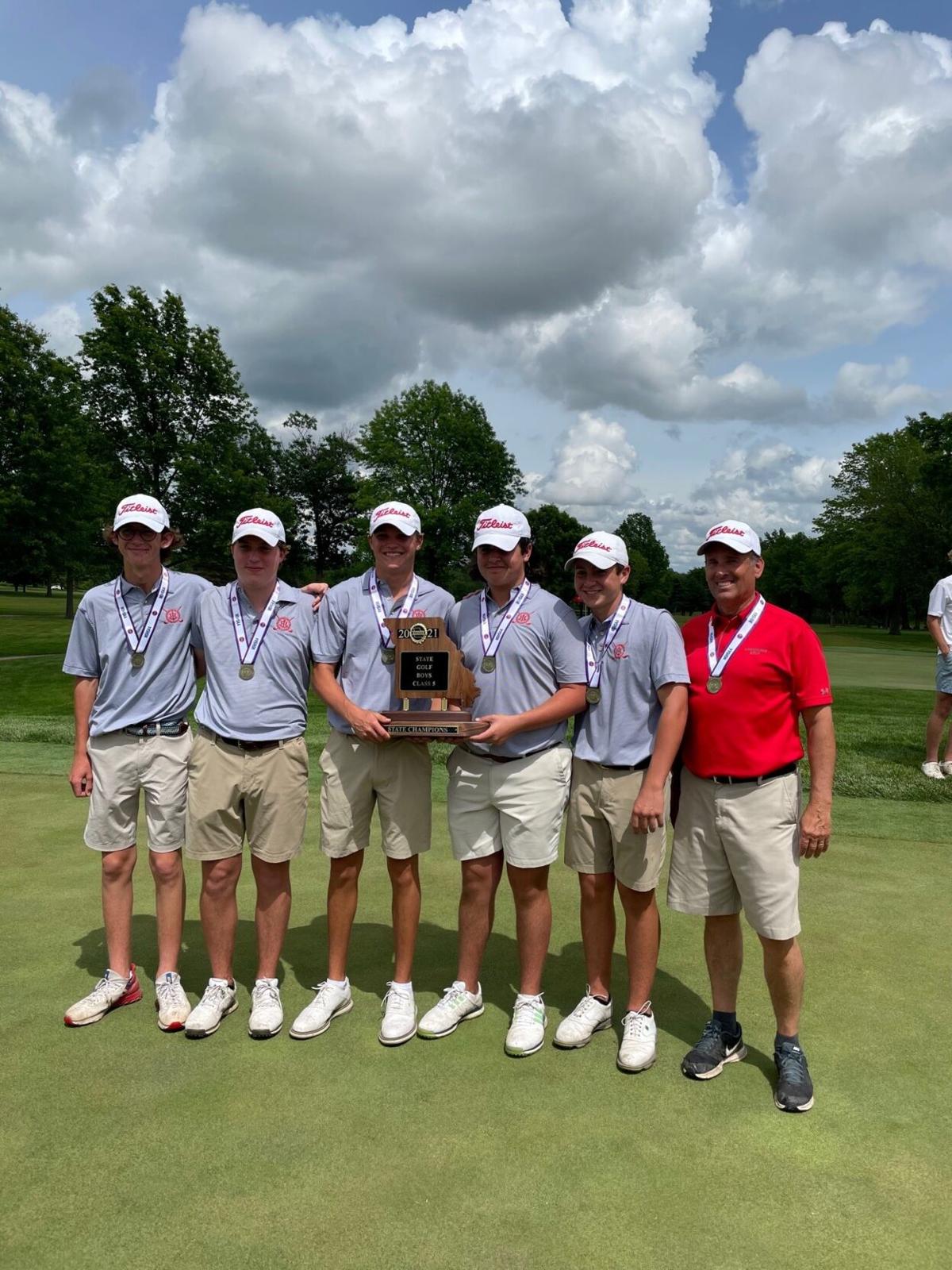 The Spartans rallied to capture the Class 4 boys’ golf state championship. The two-day, 36-hole tourney took place at Twin Hills Golf & Country Club in Joplin. At nine shots off the lead, in third place after the first round, the Spartans cut 18 strokes off the first-round score to finish with a two-day total of 610, winning by 14 shots – the team’s fifth overall state title and first since 2003.

De Smet coach Dan Likos says the team had two postseason goals: “Get all five guys through districts, and put your name in the gym [through a state championship banner]. After we accomplished goal No. 1, I simply said, ‘All right, let’s go put your names in the gym.’”

Junior Blake Skornia finished fourth at 149, and sophomore Colby Sauer tied for fifth at 150. Otherwise, senior Drew Hollman tied for 12th at 153. Max Minkiewicz (tied for 31st at 159) and Ethan Bochantin (tied for 38th at 162) earned the other scores.

“I’m pretty proud of them,” Likos says. “It’s easy to be proud of your own children … and these kids made me proud in a similar way.”

Chaminade, meanwhile, won the Class 5 tourney played at Sedalia Country Club – the Red Devils’ fifth state title and first since 2004. In recent years, the team has ended impressively: third in both 2016 and 2017 and second in both 2018 and 2019.

Elisa and Marjain Breitenbach “hate politics.” The owners of Doughboys Donuts in Raytown wake up at 1 am to start their day so they can be stocked with Bismarks and red velvet cake doughnuts when they … END_OF_DOCUMENT_TOKEN_TO_BE_REPLACED

Legends of Hip Hop | Friday, October 15 Finally rescheduled from its early pandemic cancelation, this tour will take you straight back to that drank-fueled, micro-golden era of Gulf Coast … END_OF_DOCUMENT_TOKEN_TO_BE_REPLACED

After temporarily closing like many restaurants during the pandemic, Lazia is set to relight its candelabras and little pink neon sign on Friday, November 12. The restaurant’s location in a hotel … END_OF_DOCUMENT_TOKEN_TO_BE_REPLACED

When Casey Lueck opened his business on the main drag in Grandview, he intentionally left the word “barbecue” off the sign. “I was kind of afraid to put barbecue on the sign just because it’s such a … END_OF_DOCUMENT_TOKEN_TO_BE_REPLACED