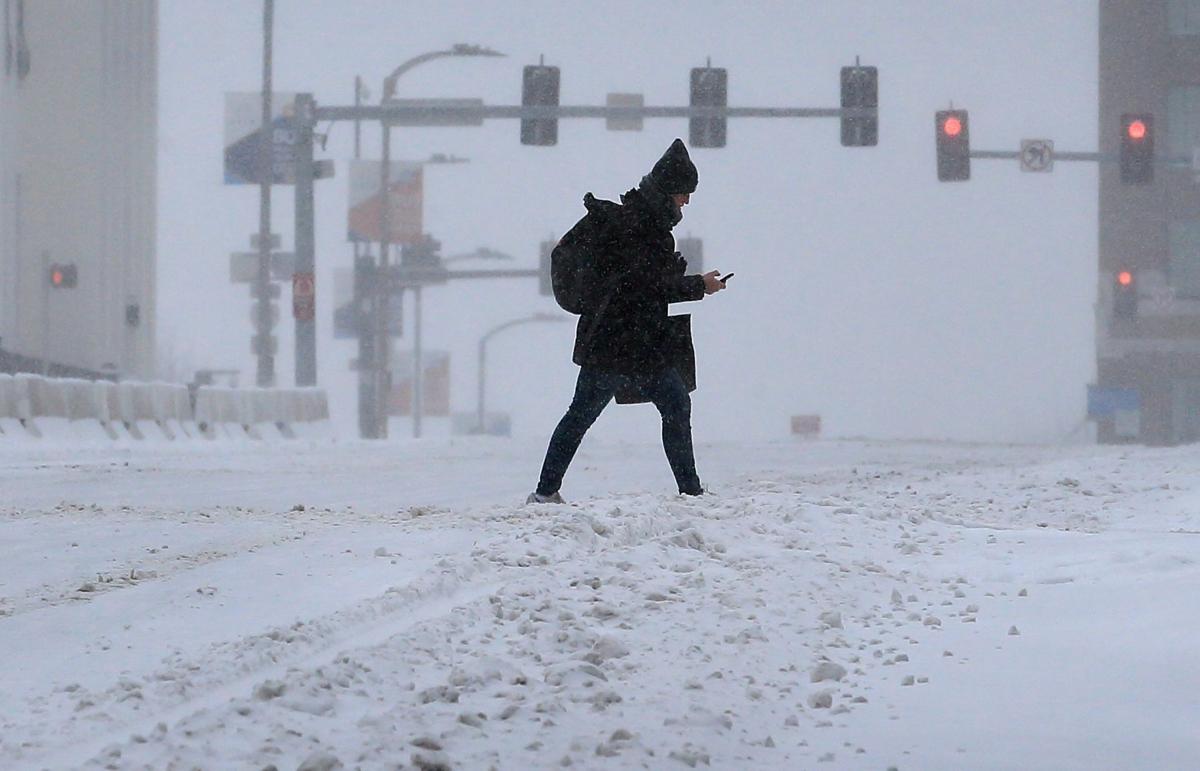 A pedestrian crosses Market Street during a snow storm in downtown St. Louis on Monday, Feb. 15, 2021. The brutally cold weather is expected to continue through Saturday with more snow in the forecast for Wednesday and Thursday. Photo by David Carson, dcarson@post-dispatch.com 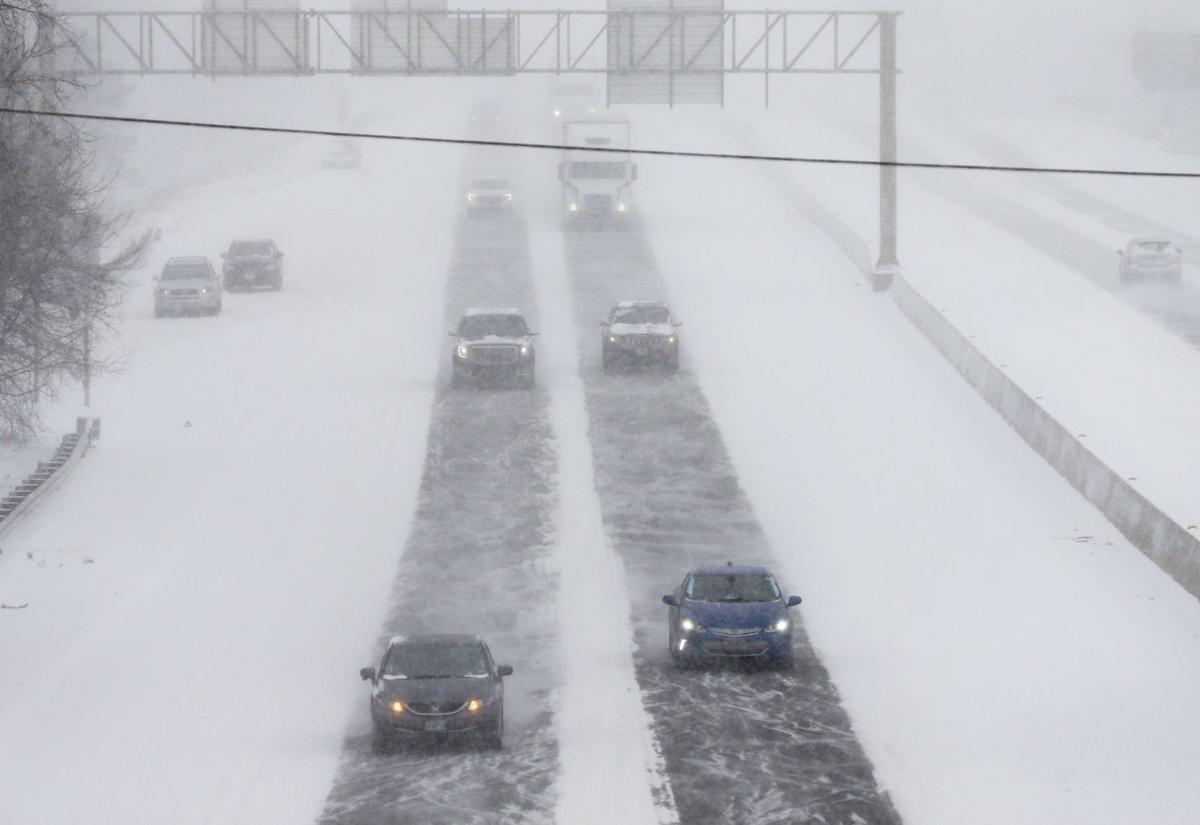 Cars drive in two cleared lanes on Interstate 44 in St. Louis on Monday, Feb. 15, 2021. The National Weather Service predicts the light snow in the morning will turn into heavy snow Monday afternoon and evening with accumulations up to 9″ possible. Photo by Colter Peterson, cpeterson@post-dispatch.com 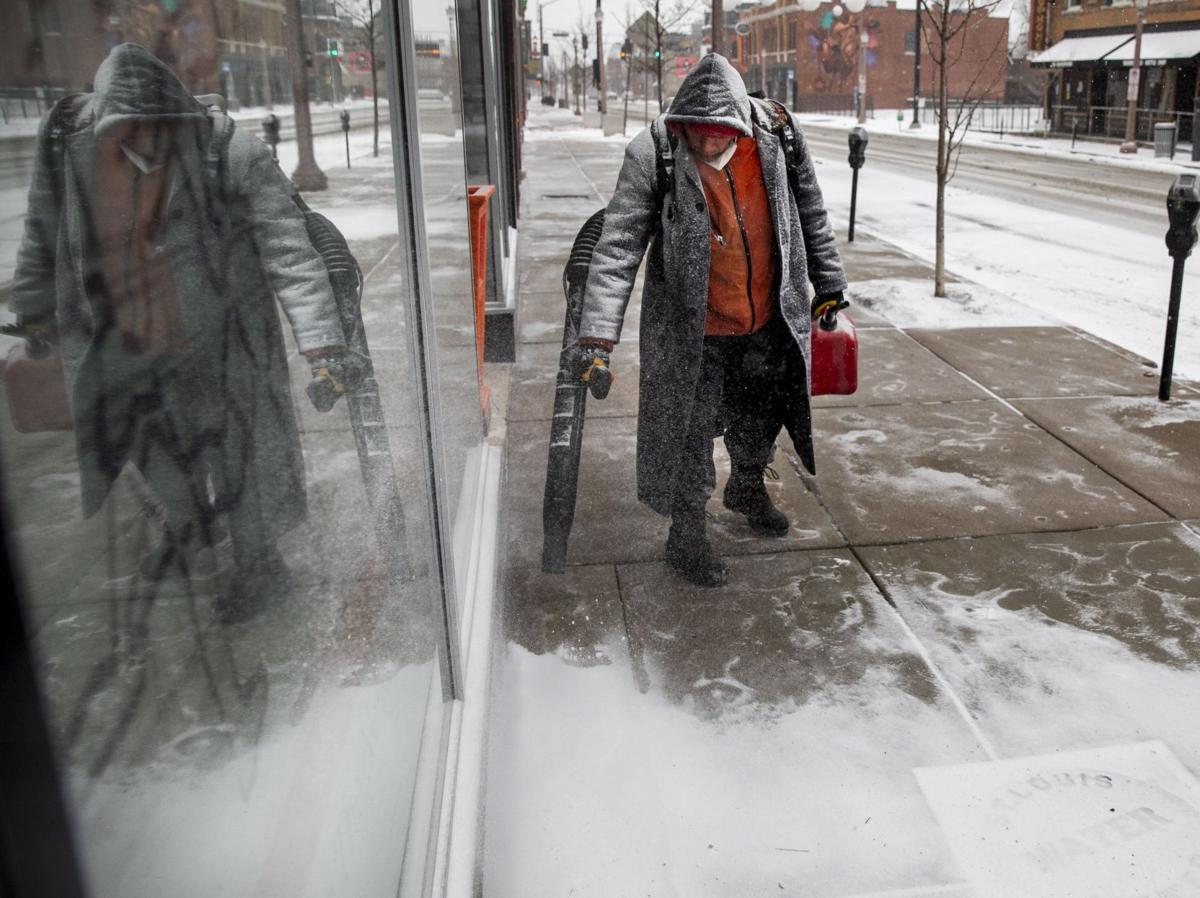 John Wesby uses a leaf blower to remove snow from in front of his and his neighbors businesses along Manchester Avenue in the Grove neighborhood of St. Louis on Monday, Feb. 15, 2021. The National Weather Service predicts the light snow in the morning will turn into heavy snow Monday afternoon and evening with accumulations up to 9″ possible Photo by Colter Peterson, cpeterson@post-dispatch.com 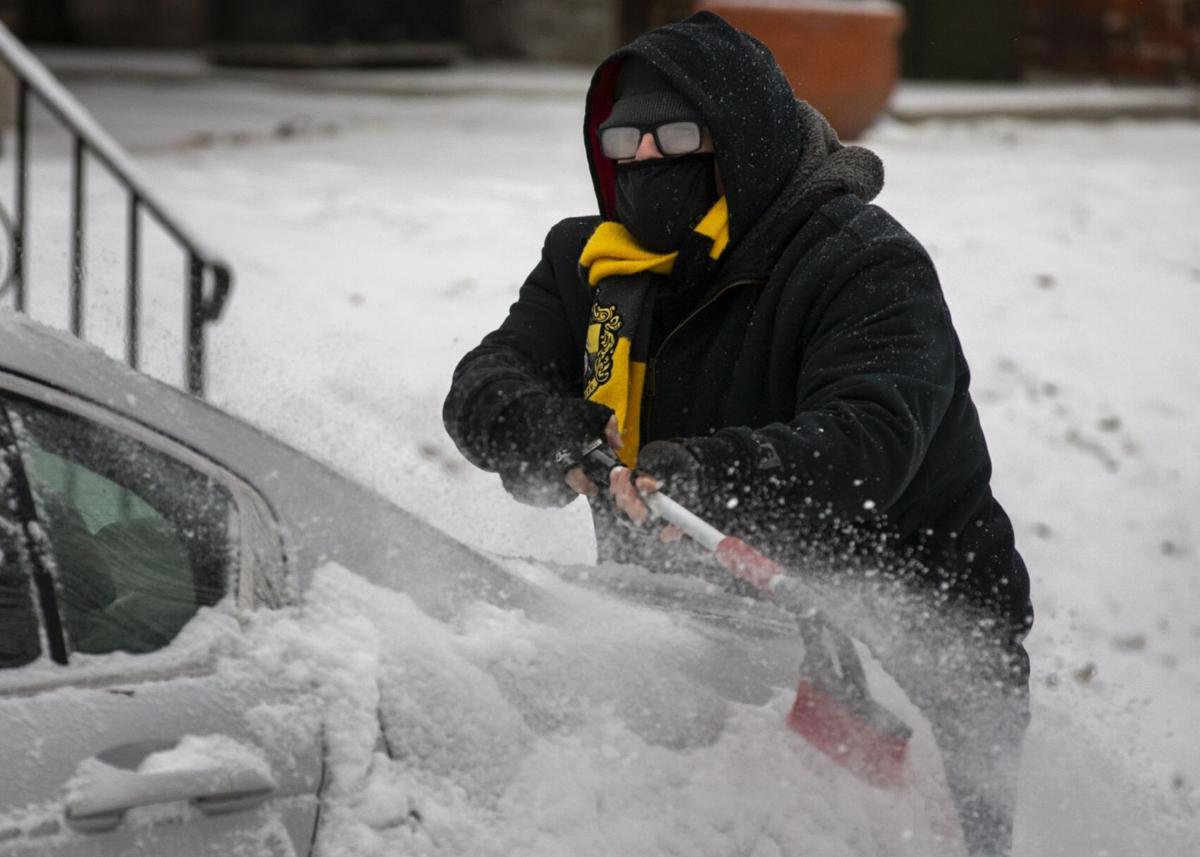 “I’m just trying to get into the car so I can be warm” says Josh Bauer as he brushes the snow off his car in the Southwest Garden Neighborhood of St. Louis St. Louis on Monday, Feb. 15, 2021. The National Weather Service predicts the light snow in the morning will turn into heavy snow Monday afternoon and evening with accumulations up to 9 inches possible Photo by Colter Peterson, cpeterson@post-dispatch.com

ST. LOUIS — A massive winter storm that covered much of the country Monday brought up to 8 inches of snow to the St. Louis region along with bone-jarring cold as emergency workers struggled to respond.

The storm shuttered businesses and slowed highways to a crawl as road crews tried to keep up with snow falling at rates up to an inch an hour. Gas utility Spire warned customers to conserve gas as high demand was mixed with lower supplies caused by snowstorms across the U.S.

“The first round of snow was just sort of the storm clearing its throat,” meteorologist Jon Carney of the National Weather Service office in Weldon Spring said Monday before a second blast hit the region through the afternoon.

Snow totals were expected to range from 5 to 8 inches, with the higher accumulation expected to the south and east of the metro area, the weather service reported.

The snowfall tapered off Monday evening but forecasters warned that wind chills could drop temperatures to as low as 30 below zero in some areas early Tuesday morning.

“With temperatures this cold, every last flake is going to stick,” Carney said.

Blowing snow and the steady snowfall were the thorn in the side of St. Louis-area road crews Monday.

If you have to drive today, give our @IDOT_Illinois and @MoDOT friends room to work. Leave extra room between you and the next vehicle.
🚗 🚚 🚕#mowx #ilwx #stlwx #midmowx pic.twitter.com/0KO087LLbI

“We plow the roads and 30 minutes later it could be covered again,” Illinois Department of Transportation spokesman Paul Wappel said.

Wappel said Metro East crews were working 12-hour shifts and faced visibility issues just like other drivers. Two area IDOT snowplows were involved in collisions with cars in Madison and Washington counties, Wappel said, adding that drivers needed to stop weaving around snowplows in such conditions.

Shaunda White, a spokesperson for the Missouri Department of Transportation, said the 200 snowplows in the St. Louis area have been fully staffed since Sunday. Trucks were treating the roads with a special mix of salt and beet juice, she said.

“We have been out there nonstop,” White said. “But the snow is coming down so fast and blowing around it’s hard to keep up.”

Matt Beitscher, a meteorologist with the National Weather Service, said visibility was reduced to a quarter-mile to half-mile in the St. Louis region. The unusually cold temperatures created a lighter, more powdery snow that was easily blown by wind gusts of 20 mph to 25 mph, he said.

“That’s a rarity for this area,” Beitscher said. “We don’t get this type of blowing snow often because it rarely gets this cold.”

The high temperature Monday was 7 degrees.

Brad Charboneau, a senior meteorologist with the weather service, said the record single-day snowfall in St. Louis for Feb. 15 was 11.4 inches, which came in 1961. The record low temperature for Feb. 15 was zero degrees in 1936.

No rest for some

Not everyone could stay home to avoid the storm. People from zookeepers to social service workers and heating repair techs who were called to homes with failing heaters had to face the cold.

Vogel Heating and Cooling received 65 calls Monday morning alone from people who said their heaters were out, said Dale Flori, the Fenton-based company’s residential division manager. That’s on top of 121 calls for no heat as temperatures plunged over the weekend, putting a strain on heaters.

Heaters tend to break down less frequently than air conditioners, Flori said, so business typically slows in the winter. But even with milder temperatures last month, this season has been especially busy, possibly because more people are working from home and notice issues with their heating units.

“If it stays like this, we’re gonna be worn out,” Flori said.

Ben Anschultz, general manager of Anton’s Air Conditioning and Heating based in Affton, said, “We’ve had some techs out from the moment they wake up to when they go to sleep the last few days.”

Other workers who had to brave the cold included the animal care and maintenance teams at the St. Louis Zoo.

Dr. Luis Padilla, the zoo’s vice president in charge of animal collections, said zoo staff prepare and train for winter storms like this, from getting animals used to their temperature-controlled indoor spaces in the summer to tailoring food for some animals so that they gain weight before the cold months.

While many animals were taken inside Monday, some chose to stay outside, like the red pandas, snow leopard, tigers and Kali, the zoo’s male polar bear.

“I don’t take for granted getting to see Kali playing in the snow on days like this,” Padilla said.

The zoo has contingency plans if storms ever get severe enough that staff needs to sleep there, but Padilla didn’t think that would be necessary this week. He added that zoo maintenance staff had worked hard maintaining the buildings and access to animal habitats through the snow.

For those without homes or somewhere to go, St. Louis city health officials said there was still room at heating shelters.

St. Louis mayoral spokesman Jacob Long advised anyone without shelter in the downtown area to go to St. Patrick’s Center. They could also call 911 in such extreme conditions.

“We’re sort of operating under emergency circumstances,” he said. “So 911 is also an acceptable option right now.”

We’ve always seen Kansas City as having the perfect ratio of city-to-simplicity—and we’re glad others are finally seeing that too. A recent CNBC Make It article reported an Icelandair analysis naming … END_OF_DOCUMENT_TOKEN_TO_BE_REPLACED

After lockdown, when bars and restaurants around the city began to reopen, Lexi St. John wanted to get out and do things. “I wanted to find all the new places that were opening. I had friends that … END_OF_DOCUMENT_TOKEN_TO_BE_REPLACED

For a small-town barbecue pit, there are three possible paths. First, you can aim to become a destination, drawing comers from all over. Second, you can convince loyal customers to eat brisket or … END_OF_DOCUMENT_TOKEN_TO_BE_REPLACED