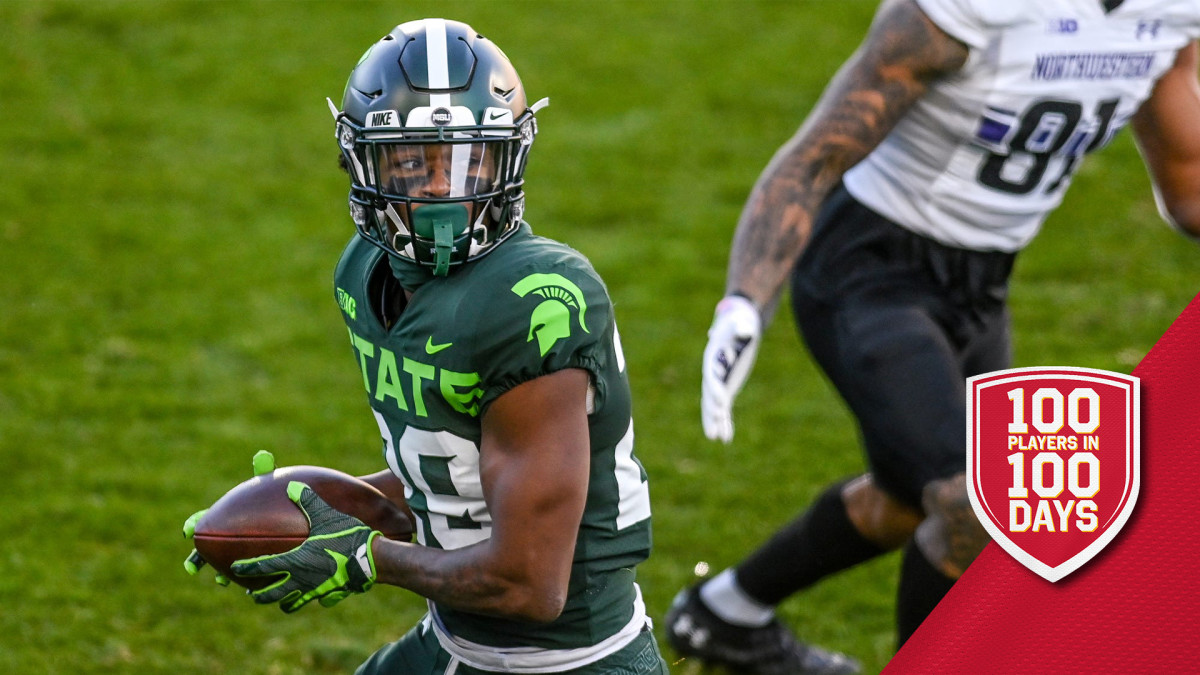 Shakur Brown burst onto the scene in 2020 for the Spartans, playing by far the best football of his collegiate career. He displayed great ball skills this past season, opting to play the ball instead of the receiver on many occasions. Brown closes quickly as soon as the quarterback starts his throwing motion and has solid anticipatory traits. His overall athletic profile is strong, featuring fluid hips and good top-end speed.

Brown’s ability to kick inside to the nickel role was briefly highlighted this year. To open up the season, he recorded an interception in each of his two games in the slot. His physicality and quickness make him a candidate to play in either cornerback alignment moving forward — and with immense potential. Brown was just a 12-game starter at Michigan State, so his best football may still be ahead of him.

One of the downsides of Brown’s inexperience is his small sample size. His sophomore season was a mixed bag of film and his seven-game 2020 season is the only extended look teams have at him when he’s at his best. He showed significant improvement, but there is risk involved with taking a player who simply doesn’t have a thorough resume.

Brown is susceptible to biting on double-moves, as he’s naturally a corner who’s inclined to take chances. His relentlessness in challenging the ball makes him an all-or-nothing gambler in vertical passing situations. Brown also punches a bit above his weight class as a player who thrives in press-man coverage but doesn’t have a large frame to work from.

How Brown fits with the Chiefs:

Although Bashaud Breeland (unrestricted) and Charvarius Ward (restricted) are listed as pending free agents, the Chiefs’ cornerback situation is relatively stable. With that said, Steve Spagnuolo values physical players capable of operating in a man-heavy scheme. Kansas City should be among Brown’s best fits at the next level. Additionally, adding him would allow L’Jarius Sneed to potentially move back out to the boundary.

Brown needs some seasoning, as do plenty of possible Day 2 picks. His limited sample size will raise some eyebrows, but he has the ability to be one of the steals of the 2021 NFL Draft. His athleticism, physicality and stickiness in coverage could make him a sneaky good cornerback. Brown is a terrific fit with the Chiefs and grades out as a top-100 prospect who could provide good future value as a late third-round selection.

Perhaps I’ve had cachete tacos in Kansas City before and not realized it. They go by a couple other names—cabeza, barbacoa. In Spanish, cachete means “beef cheeks” (one part of the cabeza) and it is … END_OF_DOCUMENT_TOKEN_TO_BE_REPLACED

Posted on January 25, 2022 City Council has approved a new pilot program allowing many Overland Park residents to raise chickens. Under the program, residents will be able to … END_OF_DOCUMENT_TOKEN_TO_BE_REPLACED

El Torreon Ballroom was born as a Jazz Age ballroom. In the seventies, the building became a counterculture hub as The Cowtown Ballroom. New owners have big plans to give it a new life. Twice in its … END_OF_DOCUMENT_TOKEN_TO_BE_REPLACED

In Kansas City Actors Theatre’s The Pests, all Eraste wants to do is meet up with his beloved. And all anybody else wants to do is detain him.  The play, which runs through January 30 at the City … END_OF_DOCUMENT_TOKEN_TO_BE_REPLACED