Excessive Heat Warnings and Heat Advisories are widespread across the Plains across the Mississippi Valley and into the Southeast as high temperatures climb into the 90s and 100s.

The heat and humidity also have prompted warnings for the Northwest.

Widespread severe storms that brought damage reports to the Midwest and Great Lakes will move into the Ohio Valley and the Northeast.

WHEN WILL YOUR CITY HAVE ITS WARMEST DAY?

Upper-level winds will continue spreading smoke from fires in the West and western Canada across the northern U.S., causing hazy conditions and poor air quality. 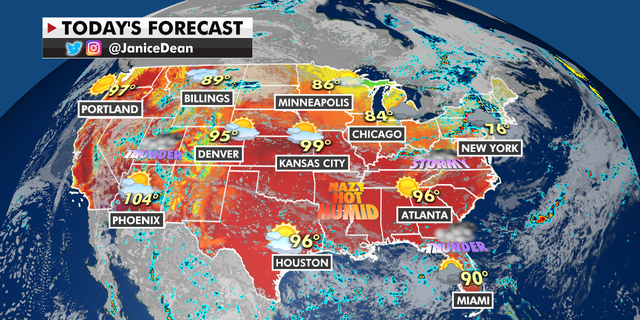 After a very strong 8.2 magnitude earthquake struck off the coast of Alaska last night, all advisories have been lifted, and there appears to be no major damage or tsunami threat.

Kansas City has long loved local lager. The vacant Imperial Brewery Co. building looming ominously over I-35, just south of downtown Kansas City, is proof. Built in 1902, at its zenith the six-story … END_OF_DOCUMENT_TOKEN_TO_BE_REPLACED