When Tamara Landeiro, owner of the Havana’s Cuisine food truck, needs Cuban bread and can’t get it in St. Louis, she hits the road. For her Cuban sandwiches, Landeiro uses bread from Tampa’s acclaimed La Segunda Bakery, established in 1915 and still renowned in Florida and beyond as one of the best bakers of Cuban loaves. Normally, she’s able to get the venerated loaves here in town. But once, when the local delivery was delayed, she got in her car and drove the six hours round trip to Springfield, Mo. “It’s easy for me to buy another bread similar to the Cuban one, but I try to do what is right,” Landeiro explained.

With few other outlets for Cuban cuisine in St. Louis, Landeiro wants Havana’s Cuisine to make the best possible impression on the city’s diners. When she was developing her Cuban sandwich, she spent several days in Miami “trying many, many restaurants” to nail down how she wanted it to taste at Havana’s Cuisine.

It’s not about innovating so much as getting the details right. The foundation is the bread, spread with mustard and layered with ham, roast pork, Swiss cheese and pickles. “You can’t put the pickles and mustard together,” Landeiro laughed. The pork typically requires six or seven hours of slow cooking with fresh garlic, spices and the juice from bitter oranges. “I usually cook it the night before we sell it on the truck because I want it to be fresh,” she said.

The menu at Havana’s Cuisine offers a window into the many disparate food traditions – African, Caribbean, Spanish – that have shaped the way Cubans eat today, both in Cuba and among the diaspora. Of the staples, none are more important than rice and beans. “We always cook rice and beans together,” Landeiro said. Black beans and rice is arroz moro (also known as Moros y Cristianos), while congri is red beans and rice. “The meat can change, but it’s always rice and beans,” Landeiro said.

Bitter orange, or Seville orange, is another secret to the Cuban kitchen. Slightly smaller and noticeably more sour than regular oranges, the citrus is often used to flavor meats in Cuba. It’s also one of the central ingredients for making mojo, a sweet, tart and garlicky Cuban sauce. Like most Cuban chefs, Landeiro uses mojo for marinating meats, particularly roast pork; it can also be drizzled atop dishes after cooking. Landeiro often takes orders for her homemade mojo from Cubans or people of Cuban heritage. “There are people who need to have it,” she said. “We do it because it’s important that they feel happy.”

Growing up, Landeiro remembers her grandma making arroz con pollo, a one-pot dish of chicken, rice, peas, bell peppers and garlic. It’s the kind of dish Cuban families gather around the table to share on Sundays, and today it’s one of the truck’s best sellers. “Cubans cook the rice with the meat at the same time, so the rice takes the flavor of the chicken,” Landeiro said. The dish gets its bold, yellow color from the addition of bijol, a condiment made from annatto seeds that’s widely used in Cuba.

Landeiro is happy to explain her food to customers who are trying Cuban cuisine for the first time. “Sometimes they have to taste,” she said. “But after they taste the ropa vieja, they want it.” Ropa vieja (meaning “old clothes,” a reference to the folk tale that gives the dish its origin story) is a very traditional Cuban dish: pressure-cooked, shredded beef served in a tomato-based stew of garlic, pepper and onions and typically served with black beans and rice.

The food truck’s regular stops include 9 Mile Garden, Tower Grove Farmers’ Market and Scott Air Force Base. Landeiro said wherever the food truck pulls up, she finds that Cuban Americans and others with Cuban connections will travel from across the region to eat at Havana’s Cuisine. “They miss their town, they miss their country,” she said. That means the ropa vieja in particular can’t be allowed to run out. “Sometimes they’re driving 40 miles,” she explained. 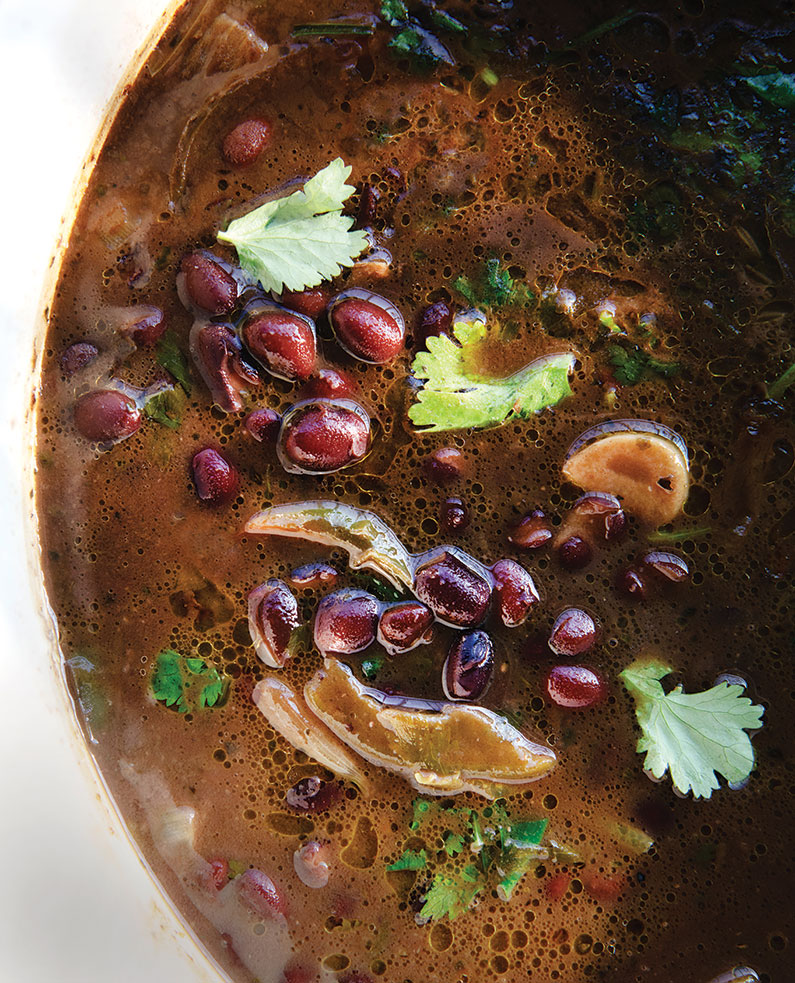 rice and beans from havana’s cuisine // photo by carmen troesser

If the Cuban sandwich is a signature of Cuban communities in Florida, Havana’s Cuisine’s Cuban fried rice is a legacy of the hundreds of thousands of Chinese people who arrived on the island in the 19th and early 20th centuries. Indeed, Landeiro’s great-grandfather was Chinese. He left for Cuba in the 1930s amid political turmoil at home, and eventually opened a Chinese restaurant, or a fonda (a name for a casual eatery, often used for Chinese restaurants in Cuba) in his new home.

“My grandma grew up cooking and living in the restaurant,” said Landeiro, who grew up hearing her grandmother’s stories and dreamed of having her own restaurant one day. But with business strictly regulated by the communist government, that wasn’t going to happen in Cuba. “At that time, people couldn’t have restaurants,” she said.

In St. Louis, Landeiro could at least partially realize her dream with Havana’s Cuisine, which launched as a stall in Soulard Farmers Market in 2019. With some help from the Hispanic Chamber of Commerce, she also started offering catering services. In March 2020, after closing the Soulard stall, she launched her food truck.

But Landeiro didn’t come to St. Louis in pursuit of her own ambitions. Her daughter Thalia’s remarkable chess talent was the catalyst for the family to pack up their life in Cuba in 2014 to head for one of the world’s chess capitals. Thalia, then only 11 years old, was already winning prestigious international chess tournaments and receiving glowing profiles in Cuban media. With Thalia’s star clearly on the rise, the family decided to move to the United States.

The move was a huge step into the unknown. “I was leaving everything that I had,” Landeiro said. She was giving up a secure job teaching accounting in a college and swapping home for life in a new country. And there would be no turning back. In spite of the Obama-era thaw in relations between the two countries, Landeiro knew that moving to the U.S. would preclude her and her family from returning to Cuba. In fact, they had to stay tight-lipped about their departure. “The government couldn’t know that we left the country,” Landeiro said. 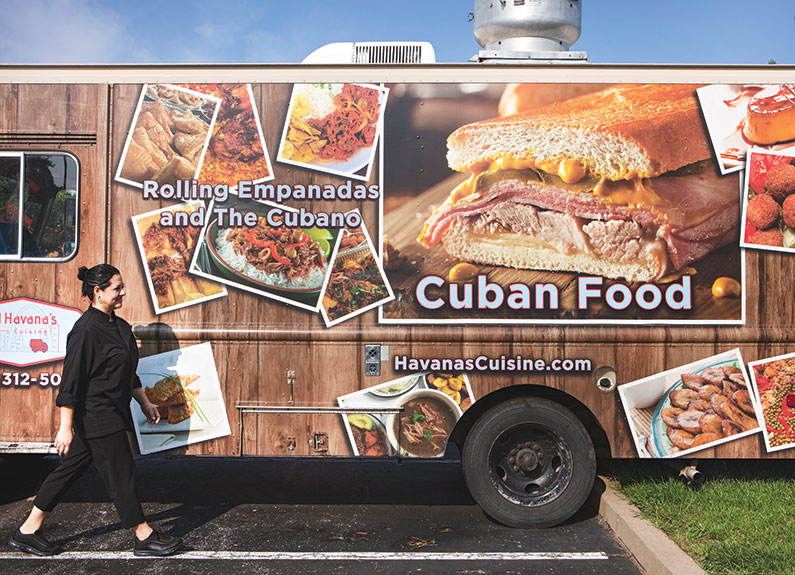 For a Cuban family, getting to the United States wasn’t as simple as hopping on a flight to Miami or Chicago. Instead, Landeiro and her family flew to Mexico. From there, they traveled overland to the U.S. border, through regions of northern Mexico where cartels rule and violence is rife. It’s “a difficult route, where many things can happen,” as Landeiro put it. When they set out, they were oblivious to the risks, but fortunately the Landeiros arrived safely at the border. As Cubans, the family was able to apply for political asylum, and they were quickly granted entry. After clearing the border, the family headed more or less directly to watch Thalia compete in her first chess tournament as a U.S. resident.

As her family settled in St. Louis, Landeiro, a trained accountant like her great-grandfather, the restaurant owner, took a job at Associated Equipment Corporation, a locally owned company that produces automotive batteries and other industrial equipment; but her love of cooking eventually led her to Havana’s Cuisine. “I’m so grateful to everybody here in the city,” she said. “We’re so happy here in St. Louis, and we need to be grateful and give back everything that we’ve received.”

Landeiro hopes the food truck is simply part of the first chapter of the Havana’s Cuisine story. “My dream is a restaurant,” Landeiro said. “I don’t want something really big, I want a small place.” She talks about a place she can decorate in Cuban style, play Cuban music and offer more Cuban specialties.

For now, Landeiro is just enjoying operating Havana’s Cuisine under relatively normal circumstances for a change, as the stay-at-home orders put in place due to Covid-19 were issued just days after the truck launched in March last year. And after all the travails of relocating her family, her journey to the U.S. border, and the fear and anxiety related to the pandemic, she believes in the power of endurance. “If you make it when things are bad, you’re going to make it when things are good.”

Jacob Collier Jacob Collier is coming to The Truman this Thursday night. This event has been rescheduled from May 2020, and resellers seemed to have marked up ticket prices quite a bit. But trust … END_OF_DOCUMENT_TOKEN_TO_BE_REPLACED

Posted on May 19, 2022 The City of Overland Park welcomes a new Human Resources Department leader, following a national search. Thomas Bledsoe comes to the City from … END_OF_DOCUMENT_TOKEN_TO_BE_REPLACED

Food from the upcoming Westport Korean restaurant Chingu/Photo by Alyssa Broadu Chingu, a new Westport spot from the team behind Sura eats, will combine Korean street food and soju … END_OF_DOCUMENT_TOKEN_TO_BE_REPLACED