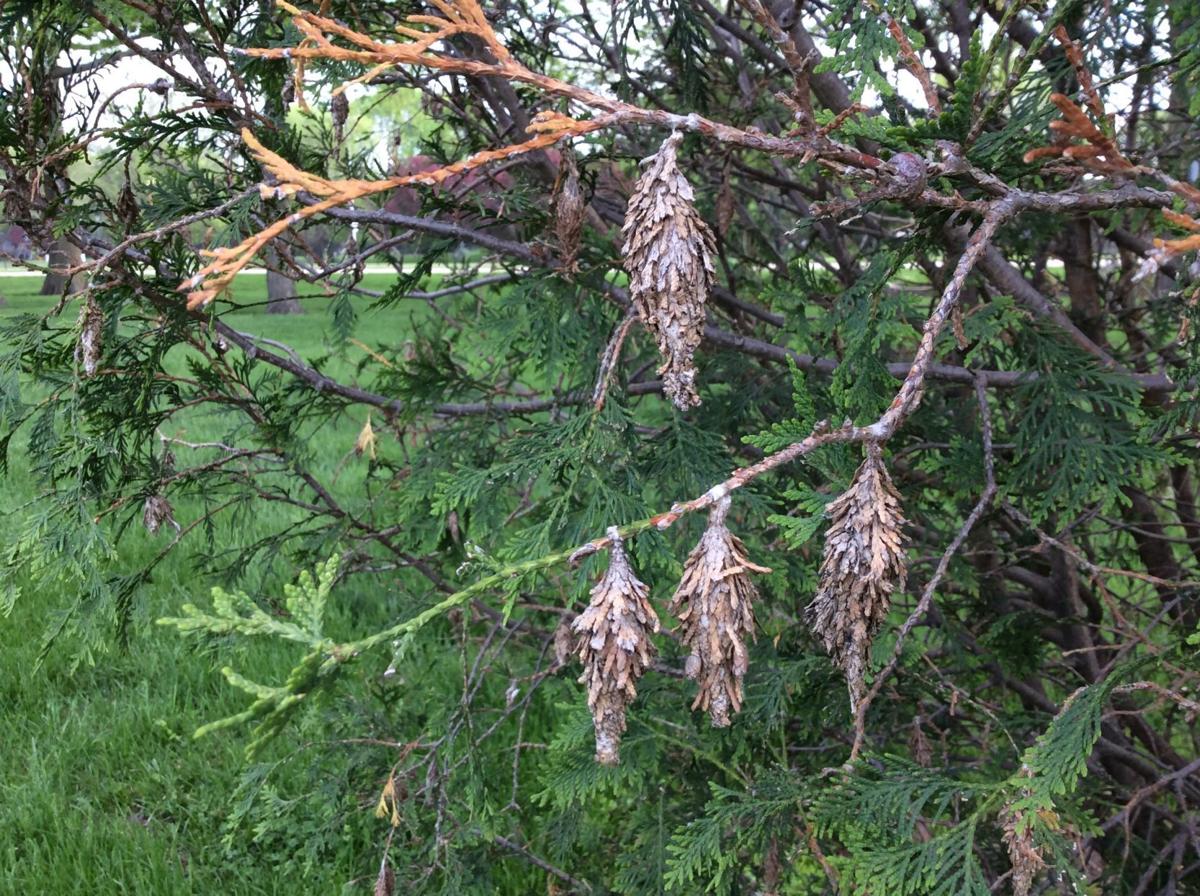 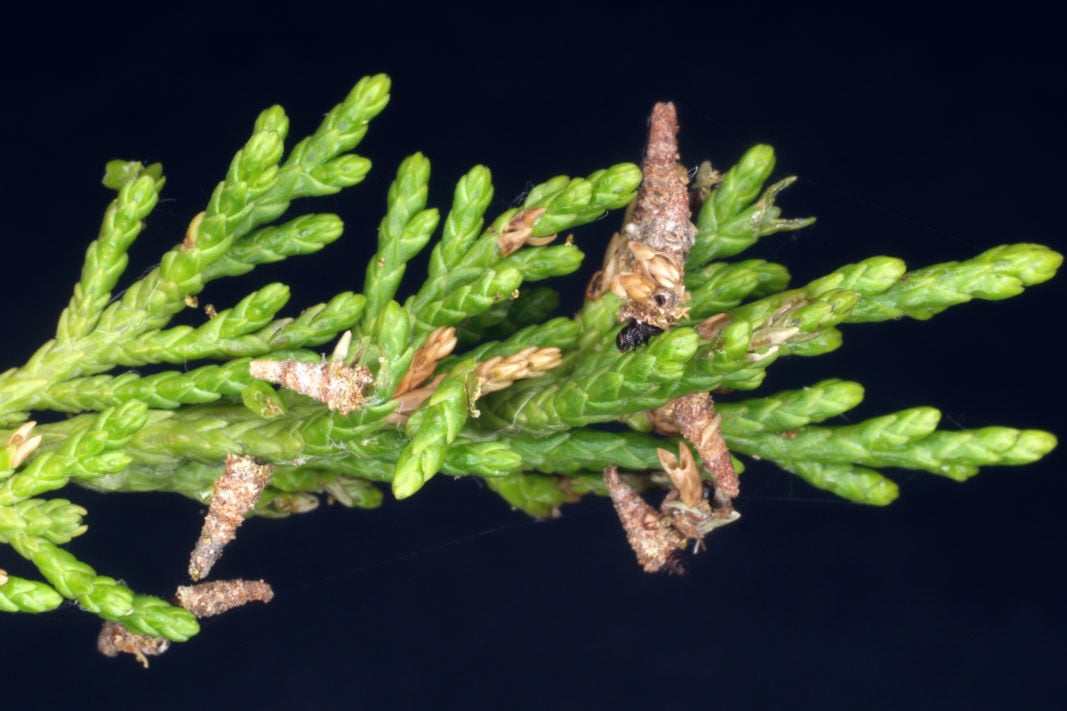 If your landscape has a history of bagworm problems, it’s time to start looking for the next generation of young insects. They will soon be hatching.

Bagworms are native to the United States and common in eastern Nebraska. They feed on many species of trees and shrubs but are most damaging on evergreen trees and shrubs since these plants can’t replace the foliage eaten by insects.

Juniper, arborvitae, fir, pine and spruce branches may be killed if completely defoliated. Entire plants can be killed if an infestation goes uncontrolled for several years, although usually bagworm infestations build up slowly over two or three years.

Bagworms also feed on shade, orchard and forest trees of nearly every kind, as well as many ornamental shrubs and perennials, however severe attacks are unusual. Since deciduous plants regrow new leaves each year, the defoliation caused by bagworm feeding is not a serious problem for these plants. However, the growth of small or newly planted trees could be slowed by heavy leaf feeding.

After overwintering as eggs inside their mother’s bag, a new generation of insects begins hatching in late May and early June. The exact hatching period is determined by temperature, so spring’s cooler temperatures may delay their emergence this year. According to the National Phenology Network: Bagworm Forecast, https://www.usanpn.org/data/forecasts/Bagworm, emergence in southeastern Nebraska is occurring now, while emergence in northeastern parts of the state are expected in the next week.

After hatching, the larvae emerge from a hole at the base of the mother’s bag and spin down a strand of silk. The tiny insect is often ballooned by the wind to nearby branches or plants. Once a suitable host is found the young insect immediately begins to form a new bag over its body to protect itself from predators.

Initially the young insect’s bag is about 1/8 inch long, but the bag is continually enlarged as the insect grows until is measures about 2 inches long when the insect is mature. Bagworm caterpillars are tiny brown or tan caterpillars with black markings and continue feeding until about mid-August.

The adult male bagworm is a small, furry gray moth with clear wings; the adult female does not have wings and never leaves the bag she constructs during feeding. By mid-August the mature larvae permanently attach their bag to a branch with a strong band of silk and begin to pupate. Adult males emerge in September.

There may be as many as 200 to 300 eggs in a single female’s bag. Since the female bagworm cannot fly, local populations can build up to damaging levels as succeeding generations of insects emerge over the course of several years, but there is only one generation per year.

How can bagworms be controlled? Handpicking the old cocoons is the best way to control light infestations on small plants. If you find old bags on your plants, but no new caterpillars yet there may still be time to remove the bags before eggs begin to hatch. Destroy bags by burning, immersing them in kerosene or by crushing. If bags containing eggs are discarded on the ground, the larvae will still hatch and find their way back to your landscape plants.

Otherwise, plan to apply an insecticide to control this year’s small larvae in mid to late June. Bacillus thuringiensis, BT, is available at nurseries and garden centers as Dipel or Thuricide. It’s very effective at controlling the insects without damaging other beneficial insects. It also has very low toxicity to birds and mammals.

Additional low-risk insecticides can be used, such as spinosad, azadiractin and insecticidal soaps. However, these products may require repeated applications to give good control.

Traditional insecticides labeled for bagworm control include bifenthrin, cyfluthrin and permethrin. Affected plants must be thoroughly covered with the insecticide so it is ingested by the insects as they feed.

How to tell the evil weeds from the merely annoying

Jared Wolfe’s original plan was to call his barbecue pit Lone Wolfe. That, he quickly came to feel, would be living a lie. “I didn’t feel like it was a good fit, to be honest,” he says. “I … END_OF_DOCUMENT_TOKEN_TO_BE_REPLACED

Posted on January 18, 2022 The City of Overland Park will begin an engagement phase of a new small business rescue program scheduled to launch in Spring 2022. The Overland … END_OF_DOCUMENT_TOKEN_TO_BE_REPLACED

Posted on January 13, 2022 The Overland Park Crisis Action Team has hit the ground running in 2022, and there’s already a new four-legged team member on board. The behavioral … END_OF_DOCUMENT_TOKEN_TO_BE_REPLACED