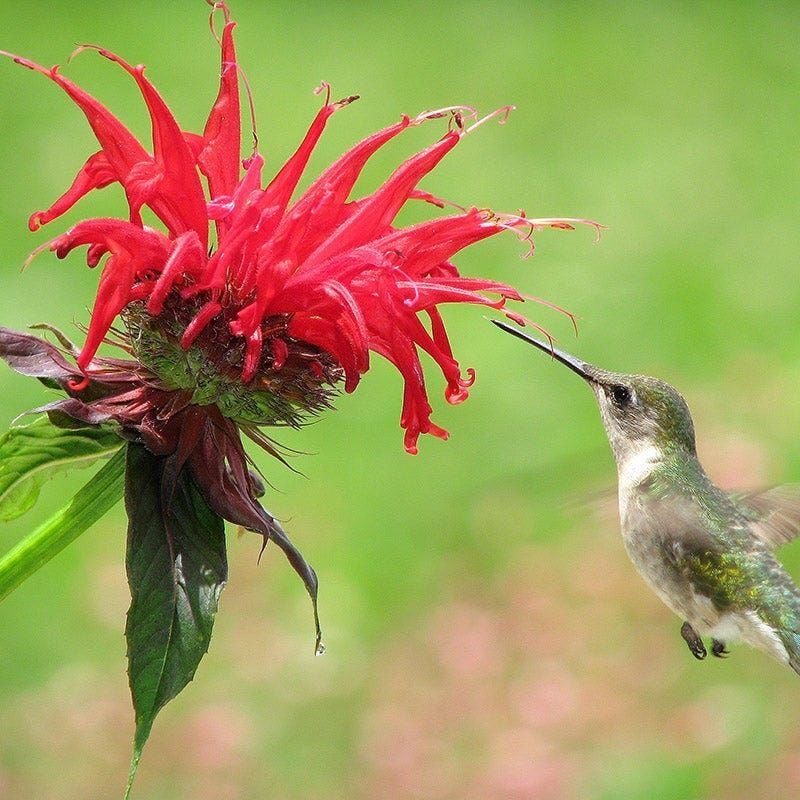 This is a Jacob Cline Monarda. There are many varieties today, but Monarda has a long history of being used for tea and as a medicinal herb. It looks great in the garden, too. 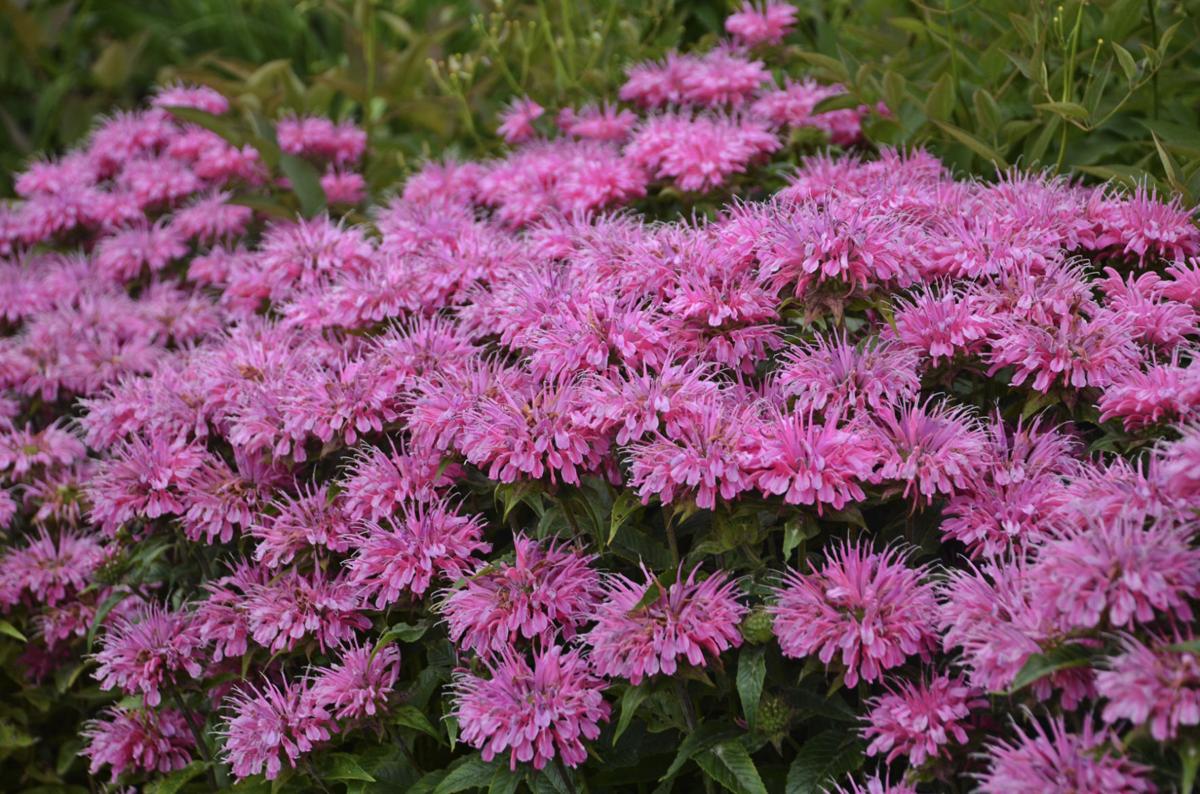 Sugar Buzz Monardas form a dome of color as they flower.

Monarda is a genus that has a long history of being used as a medicinal herb. As the common name Bee Balm implies, it has also been used to soothe bee stings.

But did you know the Oswego tribe used this plant to make an herbal tea, and they taught the early American settlers how to do so as well? This just happened to come in very handy following the Boston Tea Party. As the settlers revolted against the British tax on tea, they drank tea made from Monarda instead, thus thumbing their noses at the British and their taxes.

Monarda is a member of the mint family and consists of multiple species, most of which are hardy perennials and all of which are native to certain regions of North America. Summertime flowering on all these species is quite attractive to humans and pollinators.

Monarda punctata, aka Horsemint or Dotted Mint, is somewhat of an unruly native prairie plant characterized by tall unbranched stems topped with rounded clusters of pink or lavender tubular flowers. The stacked combination of speckled flowers and colorful bracts make this distinctive and unusual.

Monarda fistulosa, or wild Bergamot, is one of the species commonly used for medicinal purposes. Being highly aromatic with showy lavender-pink flowers, it is also used as a honey plant.

Monarda didyma, Scarlet Bee Balm, has long been cherished for not only its use for tea but also its ornamental value. The bright scarlet/red flowers of M. didyma are still a part of many ongoing breeding programs with Monarda.

It has been a long road from these native species of Monarda to the prized ornamental cultivars available today. Some of the first hybrids of M. didyma x M. fistulosa produced vibrant flower colors with a more well-behaved plant, but they continued to be plagued by their native attributes of being highly susceptible to mildew, somewhat tall and leggy and had a tendency to spread by rhizomes.

Modern breeding has introduced many new cultivars that are much more suitable in the ornamental landscape. Along with many stand-alone varieties with notable attributes of their own:

• Gardenview Scarlet: Selected by the Chicago Botanic Garden as an outstanding perennial for the Midwest.

• Petite Delight: The first of its kind dwarf introduction of monarda at just 12 to 15 inches tall.

There are several newer Monarda with formidable attributes:

• Monarda didyma Grand is from the Morden Breeding Program in Manitoba and an exceptionally hardy Monarda. Characterized by a profusion of bright flowers atop mid-sized plants, these also offer very good mildew resistance.

• The Sugar Buzz Monardas form a solid dome of color. The 2- to 2 ½-inch  flowers top off the strong stems and deep green foliage of this series. Medium in height at around 20 inches, the eight colors in this series display above-average mildew resistance and stay well contained in the garden.

• Balmy Monardas have relatively large flowers on a fully compact plant. Balmy comes in at just 10 to 12 inches, with exceptional mildew resistance and deep green foliage. They are dwarf and mounded, so they bring new uses to the landscape.

• While some Monarda species come from seed, did you know most newer selections are vegetatively propagated and are quite easy to care for in rich and organic, or just average soils?

• Monarda will die back to the ground in colder climates. They can then be cut back to 1 to2 inch stems. It’s also a good idea to remove dead leaves and stems from the area, especially if mildew has been observed on the foliage.

• As Monarda emerges from the roots/rhizomes in the spring they may be pinched to create a bushier habit if desired.

• In the full sun, they will produce a plethora of brilliant flowers beginning in mid-summer. Pair these with Achillea, Agastache or Phlox for a smooth transition of garden color into fall.

• As flowers fade, deadheading is beneficial to encourage additional flowering.

• The plant is deer- and rabbit-resistant.

Monarda brings a lot of charm and interest to the garden. Mass plantings in naturalized areas are a showstopper and create a high-traffic area for butterflies, hummingbirds and bees.

Enjoy these as specimen plants paired with your favorite summer-into-fall bloomers in the middle of the garden. When they are in full flower, you can pick a few flowers and leaves to make a batch of iced Bee Balm tea and watch the garden grow. Or dry some and save it for hot Oswego tea on a cold winter’s night!

An Iowa man fired after posting "Blue Lives Don't Exist" on his Facebook page is entitled to unemployment benefits, an Iowa judge has ruled. (Creative Commons photo via Pxhere) An Iowa man fired from … END_OF_DOCUMENT_TOKEN_TO_BE_REPLACED