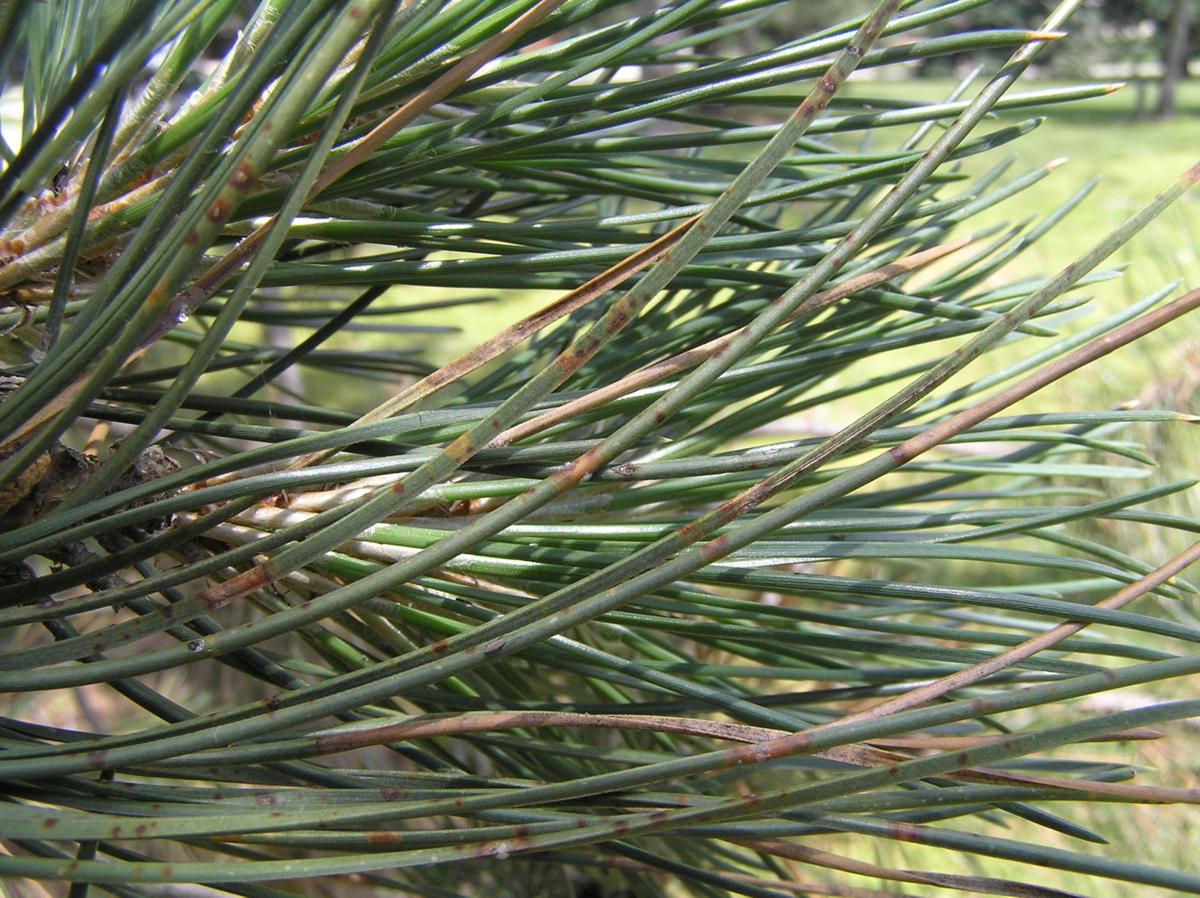 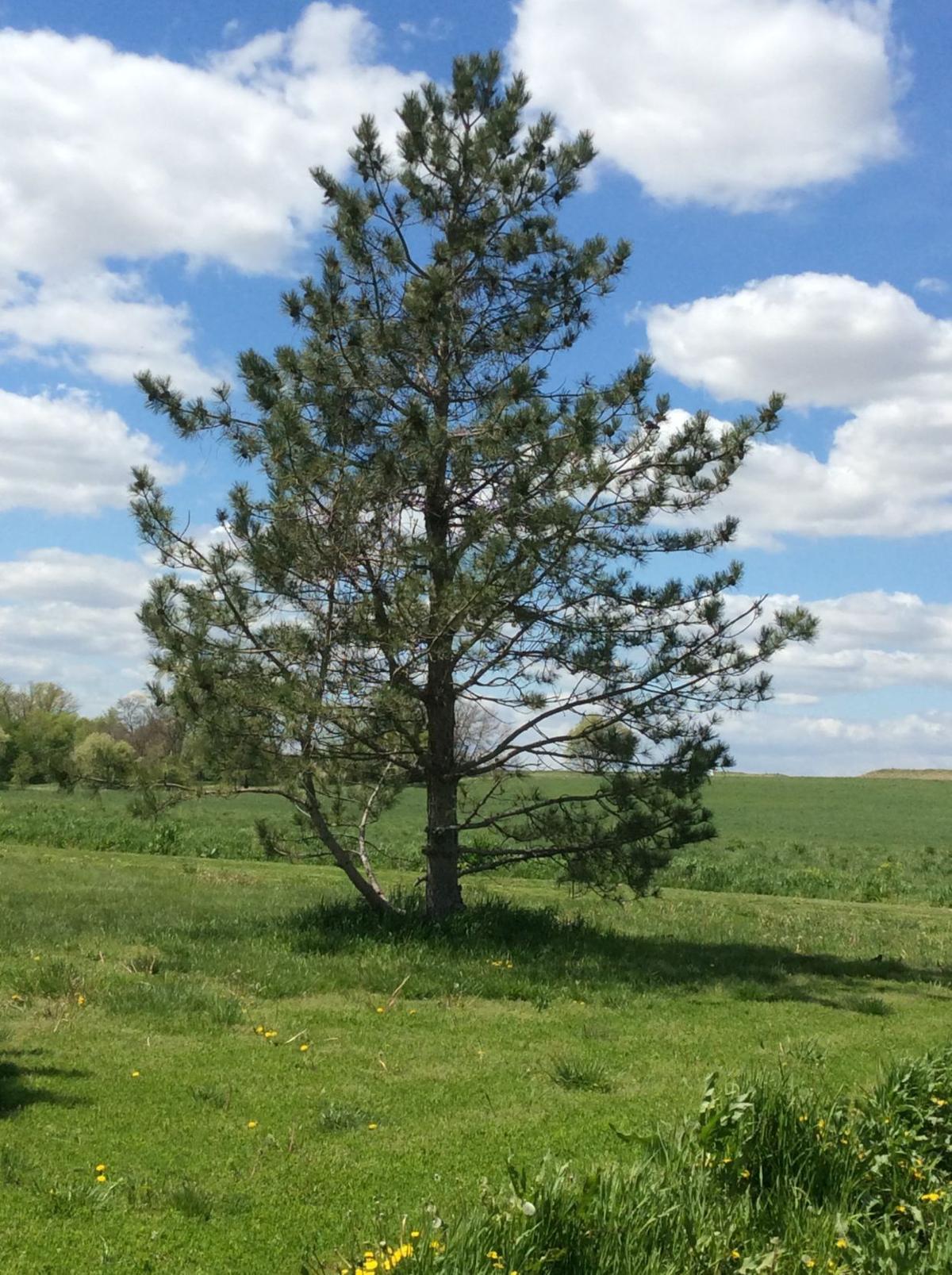 Dothistroma results in the sparse canopy visible on this Austrian pine.

Dothistroma needle blight is one of the most common fungal diseases of pines in Nebraska, resulting in sparse trees with thin canopies. Older, inner needles are affected first, causing premature needle drop.

Many species of pine are affected by this disease, but in Nebraska it’s found most commonly — and causes the greatest amount of damage — on Austrian and Ponderosa pine, both in windbreak and ornamental trees. Mugo pine, a common landscape shrub, can be infected, but Dothistroma is seldom seen in Scotch pine.

Symptoms are first seen as yellow or tan spots on older needles. These spots darken and become brown or reddish-brown, then spread to form a band around the needle. These bands are often bordered by a yellow, chlorotic ring on each side.

The fungus grows within these tissues, killing that portion of the needle beyond the lesion. Initially, the tip of the needle dies while the base remains green, but eventually as the disease progresses, the base of the needle also dies and the entire needle drops off the tree.

Lower branches of trees are most severely infected, due to reduced wind movement and slightly higher humidity levels near the ground, but the entire tree may show symptoms.

Promoting overall tree health and vigor goes a long way to lowering a tree’s susceptibility. Control weeds and turf beneath trees. Maintain a 3 to 4 inch layer of wood chip mulch beneath trees, but do not mound it up around the tree’s trunk. A flat, even layer is ideal, pulling the mulch back slightly so it does not lay against the tree’s trunk.

Adjust landscape irrigation heads so water does not spray on your pine tree’s needles. Frequent wetting increases the potential for needle infections.

Prune out dead branches in pines to reduce fungal innoculum.

Infection on trees with a history of Dothistroma can be significantly reduced by making two fungicide applications.

Copper fungicides work well, are very common and can usually be found at most nurseries and garden centers that have a good chemical selection. They also have low human toxicity and low environmental impact.

Look for liquid or fixed copper formulations, such as Bonide Copper Fungicide, Monterey Liqui-Cop, Southern Ag Liquid Copper Fungicide and any other copper fungicide labeled for use on evergreen trees.

Many formulations of these products are available from a variety of manufacturers. Just make sure pine trees are a labeled site for the product you buy. Read and follow all label directions carefully before application.

Spray applications to large trees are difficult, so if you don’t have the equipment to reach the top of the tree that’s OK. Focus on getting good coverage on the lowest 6 to 8 feet of the canopy.

Annual applications of fungicide are not always necessary to control this disease. Monitor susceptible pines for symptoms of infection each year. If infection occurs during a year in which fungicide has not been applied, and is severe enough to warrant control, then fungicide can be applied the next year with confidence that good control will be obtained. If little or no infection occurs during a year when fungicide was not applied, then spraying can be skipped for another year.

For more information, refer to:

Elisa and Marjain Breitenbach “hate politics.” The owners of Doughboys Donuts in Raytown wake up at 1 am to start their day so they can be stocked with Bismarks and red velvet cake doughnuts when they … END_OF_DOCUMENT_TOKEN_TO_BE_REPLACED

Legends of Hip Hop | Friday, October 15 Finally rescheduled from its early pandemic cancelation, this tour will take you straight back to that drank-fueled, micro-golden era of Gulf Coast … END_OF_DOCUMENT_TOKEN_TO_BE_REPLACED

After temporarily closing like many restaurants during the pandemic, Lazia is set to relight its candelabras and little pink neon sign on Friday, November 12. The restaurant’s location in a hotel … END_OF_DOCUMENT_TOKEN_TO_BE_REPLACED

When Casey Lueck opened his business on the main drag in Grandview, he intentionally left the word “barbecue” off the sign. “I was kind of afraid to put barbecue on the sign just because it’s such a … END_OF_DOCUMENT_TOKEN_TO_BE_REPLACED