Chloe, a 5-year-old Blue Weimaraner, takes a moment to cool down Friday June 18, 2021, while playing fetch at the University City dog park with her owner, Ken Simpson of St. Louis. Temperatures today can reach dangerously high levels topping off in the low 100s. Photo by Christian Gooden, cgooden@post-dispatch.com 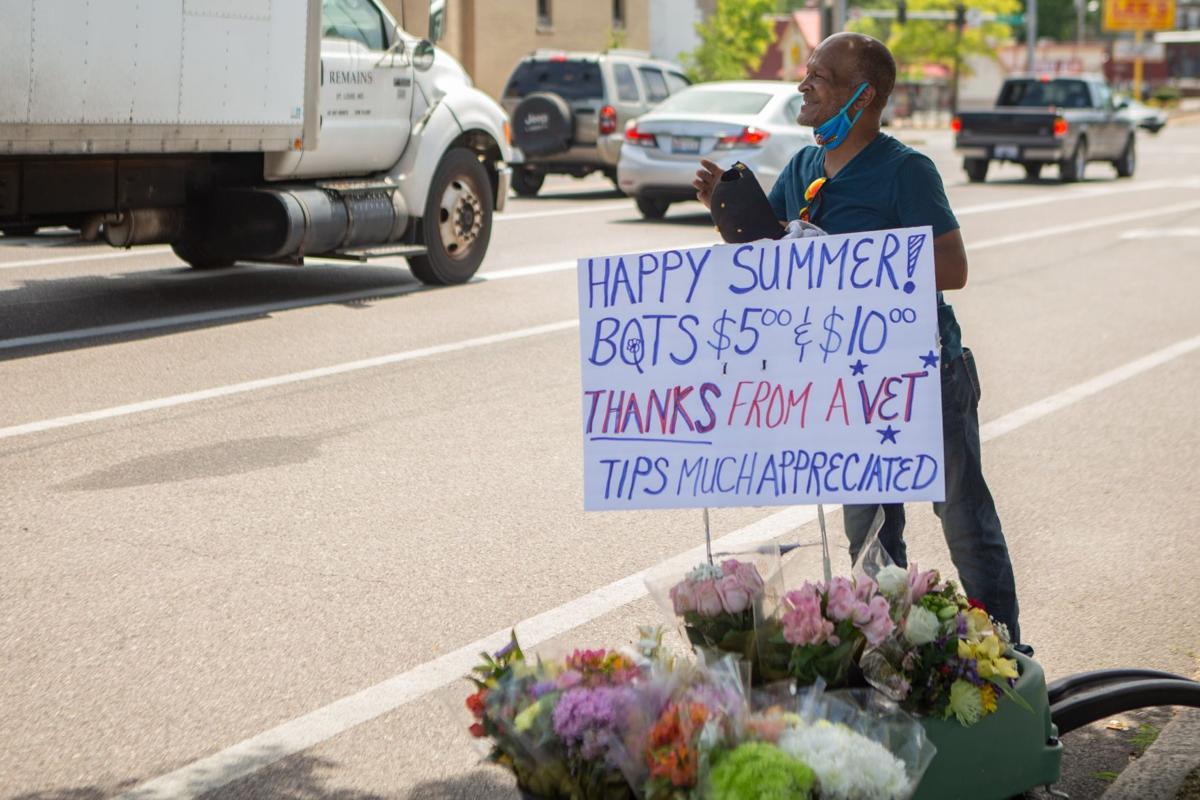 Army veteran Kirk Russell of St. Louis blows kisses to a motorist who bought a bouquet of flowers from him on Gravois Avenue in St. Louis on Monday, June 14, 2021. “It keeps a roof over my head”, Russell said, “There’s good days and there’s bad days. You just gotta do what you gotta do to make it.” The National Weather Service said the high temperature on Friday could reach 102 degrees. But forecasters predict the day’s heat index could be closer to 105 to 107 degrees in some places. Photo by Daniel Shular, dshular@post-dispatch.com

A heat advisory was in effect to 7 p.m. Friday as NWS meteorologists predicted the day’s heat index — what it feels like once humidity is factored in — would reach 105 to 107 degrees in some places.

Officials warned the combination of heat and humidity can cause heat stress for those with extended exposure or those exerting themselves outdoors, so the National Weather Service issued the heat advisory covering the St. Louis metropolitan area and a large swath of the broader region.

City officials in Troy, Missouri, were urging residents to conserve water. In a Thursday evening alert, they asked that if residents must water their yards, they do so on an alternating schedule.

Officials urged people to check on neighbors and relatives most susceptible to heat stress, including the very young, the elderly and those without air conditioning.

The Salvation Army has opened some cooling centers. To find locations, visit salvationarmystlgateway.org.

Jacob Collier Jacob Collier is coming to The Truman this Thursday night. This event has been rescheduled from May 2020, and resellers seemed to have marked up ticket prices quite a bit. But trust … END_OF_DOCUMENT_TOKEN_TO_BE_REPLACED

Posted on May 19, 2022 The City of Overland Park welcomes a new Human Resources Department leader, following a national search. Thomas Bledsoe comes to the City from … END_OF_DOCUMENT_TOKEN_TO_BE_REPLACED

Food from the upcoming Westport Korean restaurant Chingu/Photo by Alyssa Broadu Chingu, a new Westport spot from the team behind Sura eats, will combine Korean street food and soju … END_OF_DOCUMENT_TOKEN_TO_BE_REPLACED