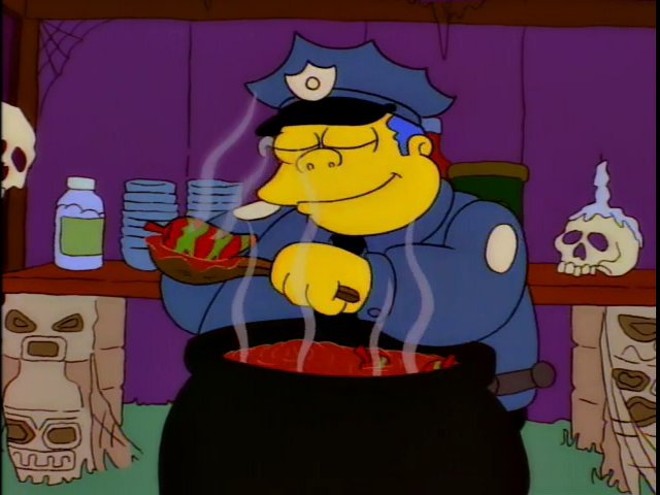 If you haven’t looked outside today (or had one of your pipes explode and fill your house with water) you might be presently unaware, but it’s currently a bitterly cold, frozen wasteland all across the bi-state area. And, for some of us, that can mean only one thing: It’s time for chili!

Perhaps you have your own recipe — great! I would love to sample your wares; feel free to share in the comments. But for those who do not, I thought I’d share my own recipe, a slow-cooker affair simple enough to be made by any dunce with or without access to a blogging platform, and prepared with ingredients readily available at most local grocers (in this case, Schnucks).

RELATED: Recipes for Classic St. Louis Foods That You Can Make at Home

Now, I’ve never written a recipe post to be published on a blog before, but I’ve read more than a few, so I know that there needs to be some inane bullshit here at the top drawing from my personal life so that you have something boring to skip over in search of the actual recipe. Some stupid anecdote about my relationship to this particular food and how it nourishes not only my body but also my soul by putting me in touch spiritually with a treasured memory or a long-lost relative.

So here goes: I still remember the first time I tried my great-uncle Rufus’ chili, twenty feet underground in his lead-shielded Y2K-proof bunker deep in the Missouri wilderness. I can still smell the mix of beans and sauce as they simmered over the propane-powered stove top, with Uncle Rufus muttering in the corner about planes dropping from the sky and nukes exploding across the world as he attended to the pot.

“IT IS IMPERATIVE THAT YOU SOFTEN THE ONIONS BEFORE ADDING THE SPICES,” he yelled, turning and seizing me by the shoulders and raising his voice so he could be heard through his gas mask. “YOU WILL KNOW THE PAN IS READY FOR THE MEAT WHEN YOU BEGIN TO SMELL A FRAGRANT BOUQUET IN THE AIR!”

Shuffling across the room in his hazmat suit, Rufus approached the bunker’s periscope to the surface and peered through. “THIS IS THE MOST DANGEROUS POINT OF THE RECIPE,” he shouted as he rotated his view 360 degrees. “THE IRRADIATED ONES WILL BE ABLE TO USE THEIR SUPER-SENSES TO SMELL THE CUMIN, AND THEY WILL ATTEMPT TO DIG INTO THE EARTH AND INVADE OUR SANCTUARY. WE MUST PROTECT THE SANCTITY OF THE BUNKER!”

Rufus then tossed me his Remington 12-gauge, which I loaded with shells and cocked, just as we’d practiced hundreds of times. I looked down the sights, unsure where to point the weapon — Rufus had made clear on repeated occasions that though the lead walls could keep the radiation out, the mutant claws of the now-monstrous survivors would be able to dig through anything. They could emerge anywhere, and I must be ready.

As I pointed the gun wildly in every direction around the candlelit room, I quietly wondered when my parents would return to pick me up from my fun weekend with the relatives. Uncle Rufus turned his attention back to the simmering mixture as he added more ingredients. “BE SURE THAT YOU DO NOT OVERCOOK THE MEAT OR IT WILL LOSE SOME OF ITS JUICY FLAVOR,” he bellowed before loading his revolver with just two bullets.

“JUST IN CASE,” he shouted ominously, his eyes locking with mine as he snapped the gun’s cylinder back into place. I was too young and naive to know what he meant, though.

Is that enough? OK, here’s that recipe:

1. Fry ten strips of bacon in a large pan (I use a big cast iron). You’ll probably have to do five at a time.

3. Set the cooked bacon to the side. Dump out all but 3 tablespoons or so of the bacon grease.

4. Set the stove on medium-high. Add the onions and peppers, along with a pinch of salt, to the greasy pan. Cook for 8 minutes until soft, stirring occasionally.

5. While the onions are cooking, finely chop 8 medium garlic cloves. Prep a mixture of 1 tablespoon of cumin, 1/4 cup chili powder (not a typo, just trust me), 1/2 teaspoon cayenne pepper, 2 tablespoons brown sugar. Add all that to the pan, cook until fragrant, about 1 minute.

6. Add 2 pounds ground beef. The fattier the tastier. If I’m being honest I often use turkey so as not to be a fatty myself, but you are sacrificing some flavor if you go that route. My most recent batch was half turkey, half beef, and I loved it. Add 1 and 1/2 teaspoons of salt. Mix well, chopping up the meat with the utensil of your choice, and cook until no longer pink, about 8 minutes.

7. While the beef/turkey is cooking, reduce your plate of bacon into bacon bits through the method of your choosing (I use scissors).

8. Dump everything into a slow cooker. Add 2 14-oz cans of diced tomatoes and 2 15-oz cans of beans. I like one can pinto beans and one can kidney beans but whatever you like is probably gonna be fine.

9. SECRET (cheating?) INGREDIENT: Rather than adding tomato sauce at this stage, as most recipes call for (and as my own has in the past) use restaurant-style salsa instead. I use Hacienda brand salsa; they sell it at Schnucks. 14 oz or so.

10. Twist a pepper grinder into the pot until you feel like it’s a good amount of pepper. I have no idea exactly how much that is; I eyeball it every time, with no particular rhyme or reason as to amounts. Sprinkle some crushed red pepper in there too; I again don’t know just how much.

And that’s it! Feel free to tweak any part of the recipe to your preferences — good chili is meant to be an ever-evolving affair, and there are no absolutes.

Just remember to stay sharp when you add that cumin — think of ol’ Uncle Rufus, and always keep your revolver at the ready.

Brown Brothers Construction, Inc. has been providing excellent commercial construction services for over 15 years. Brothers Ray and Jared Brown started the company with a commitment to bringing … END_OF_DOCUMENT_TOKEN_TO_BE_REPLACED

{{featured_button_text}} The Lincoln-Lancaster County Health Department reported 32 new cases of COVID-19 on Thursday, bringing the total number of cases in the county to 31,107.The number of deaths … END_OF_DOCUMENT_TOKEN_TO_BE_REPLACED