Trees downed by high winds smashed a car parked along the north side of Tower Grove Park, after overnight storms in the Southwest Garden neighborhood of St. Louis, which was left with a power outage, shown Saturday morning, July 10, 2021. A neighborhood resident said that during the storm it felt like her roof was being lifted off. Photo by Michael Hamtil, mhamtil@post-dispatch.com 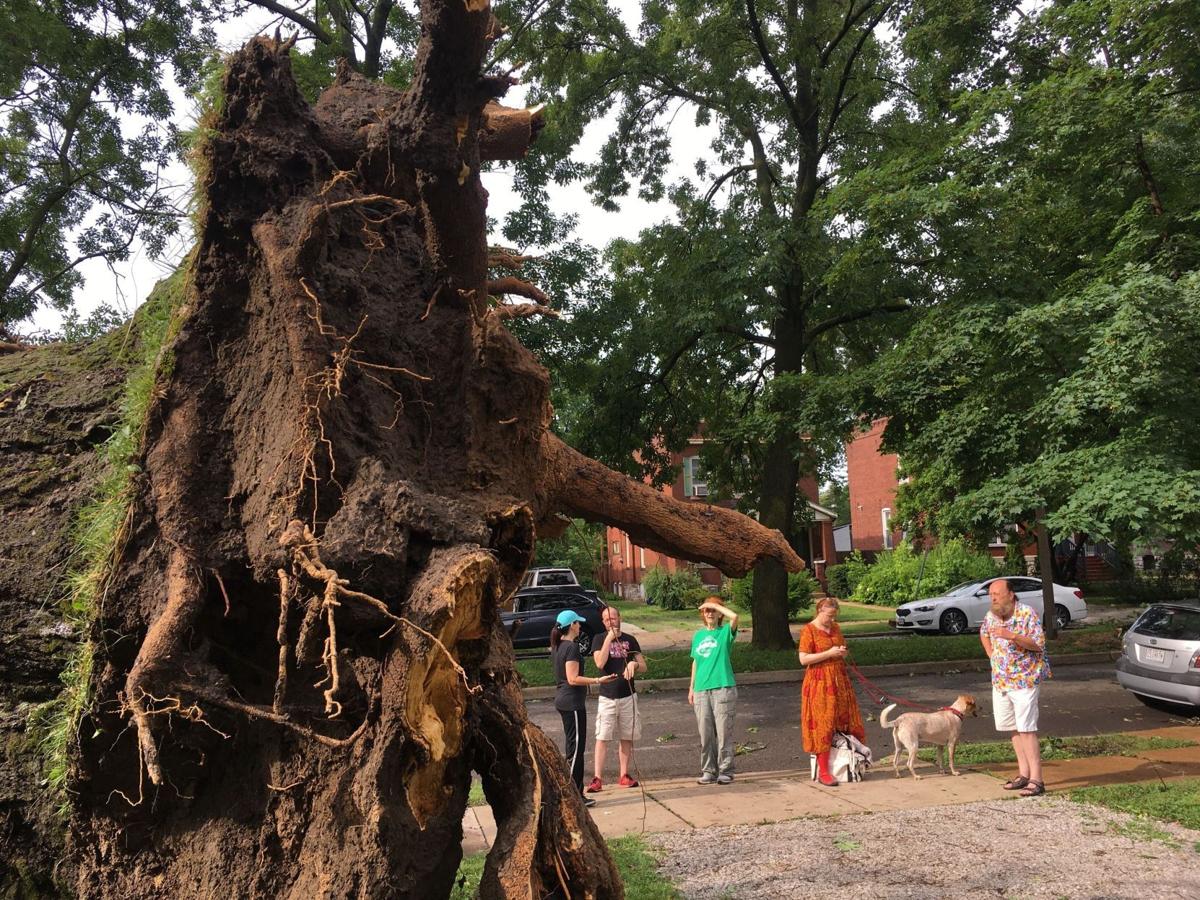 Neighbors marvel at a massive tree that was brought down by high winds on a street just west of Tower Grove Park, after overnight storms in the Southwest Garden neighborhood of St. Louis, which was left without power on Saturday, July 10, 2021. The property owner, Dr. Heidi Sandige, second from right, came home to the damage after working overnight. “This was a beautiful tree. Probably the oldest tree in the neighborhood except for the Botanical Garden. It was a draw for the property,” she said. Photo by Michael Hamtil, mhamtil@post-dispatch.com 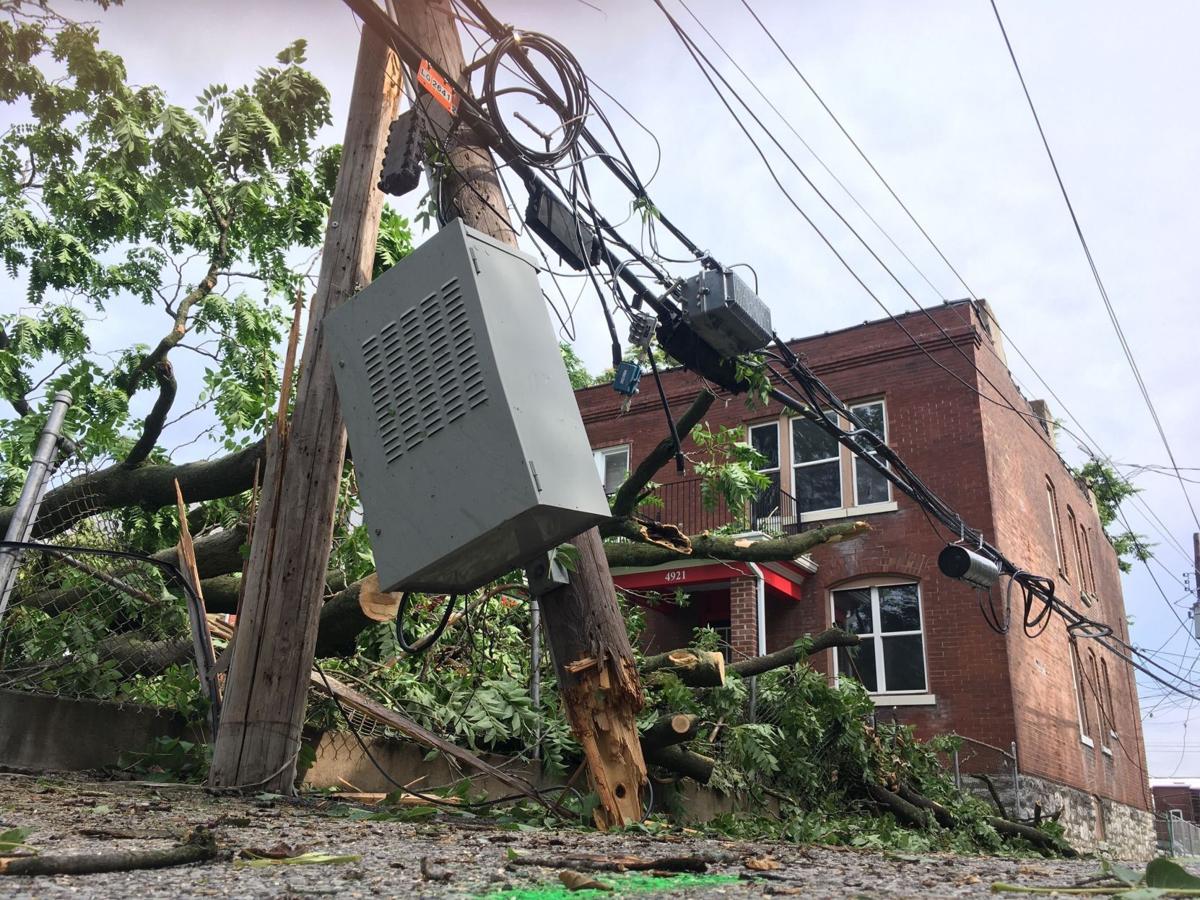 A downed power line and pole snapped in half are seen in a neighborhood without power just west of Tower Grove Park, after overnight storms in the Southwest Garden area of St. Louis, on Saturday, July 10, 2021. Photo by Michael Hamtil, mhamtil@post-dispatch.com 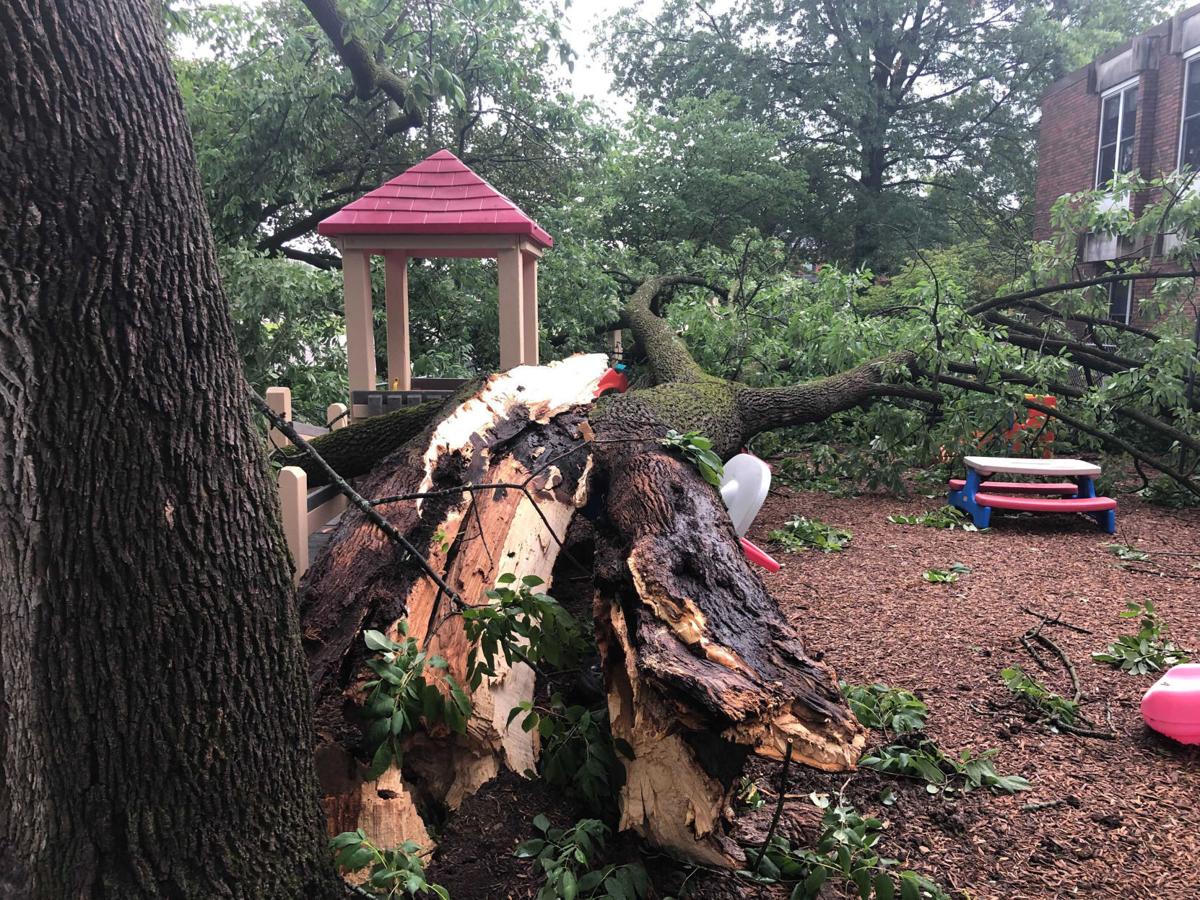 UPDATED at 11 a.m. Saturday with authorities reporting a 12-year-old child was swept away by floodwaters.

ST. LOUIS — A powerful overnight storm knocked down trees and utility lines, brought flash flooding to some areas of the St. Louis region and was followed by public safety officials warning of another round of damaging winds and thunderstorms later Saturday.

A 12-year-old girl was swept away by floodwaters when she was trying to exit a vehicle she was riding in, according to Missouri Highway Patrol Cpl. Juston Wheetley. Crews are still searching for the girl, he said, and “hoping for the best, but expecting the worst.”

The vehicle she was in was traveling eastbound on Interstate 70 near St. Louis Lambert International Airport about 1:30 a.m. Saturday, he said. When the driver attempted to make a U-turn and navigate Air Flight Drive, the car was caught in a current. It was swept into a large concrete storm drain, Wheetley said. Two other children and the woman driving the car were able to exit safely, he said, but he was not sure if they were injured.

As the 12-year-old attempted to exit the car with them, she was swept into the storm drain.

Several other vehicles attempted to drive through the floodwaters and were stalled, Wheetley said. No Missouri highways were flooded as of 10 a.m.

February is short but sweet. This month, we share our picks for the city’s best bonbons and a lot of other unique sweets that are baked, dipped and drizzled to perfection. By Dawnya Bartsch, Martin … END_OF_DOCUMENT_TOKEN_TO_BE_REPLACED

Photo by Caleb Condit and Rebecca Norden It’s Valentine’s Day month, but fancy chocolate deserves to be enjoyed year-round. We visited chocolatiers around the … END_OF_DOCUMENT_TOKEN_TO_BE_REPLACED

Posted on December 1, 2022 Overland Park now has more access to information about its Police Department than ever, thanks to a library of online transparency-focused … END_OF_DOCUMENT_TOKEN_TO_BE_REPLACED