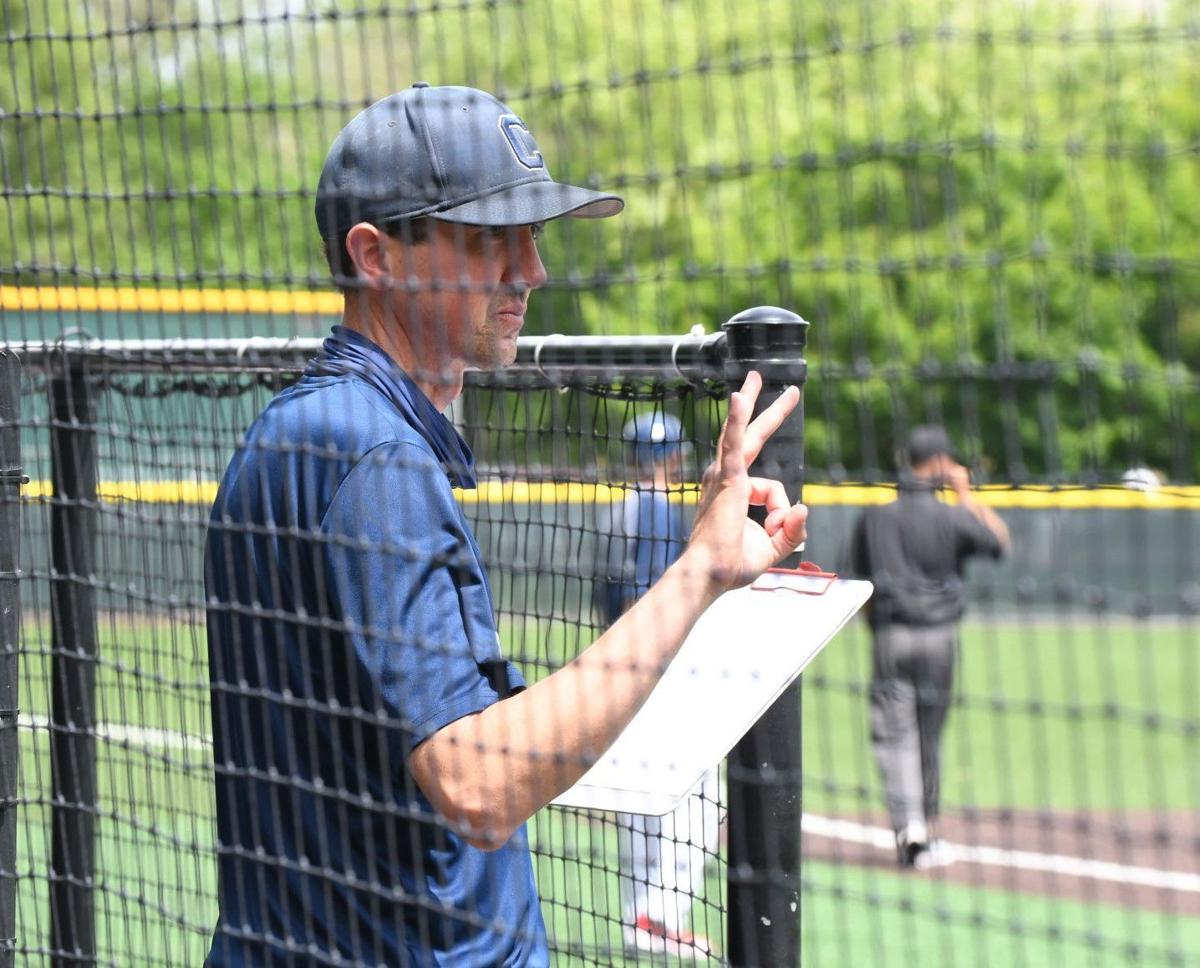 Concordia baseball coach Ryan Dupic, who took over the program ahead of the 2015 season, has the Bulldogs in uncharted territory: the NAIA World Series, which begins Friday in Lewiston, Idaho. 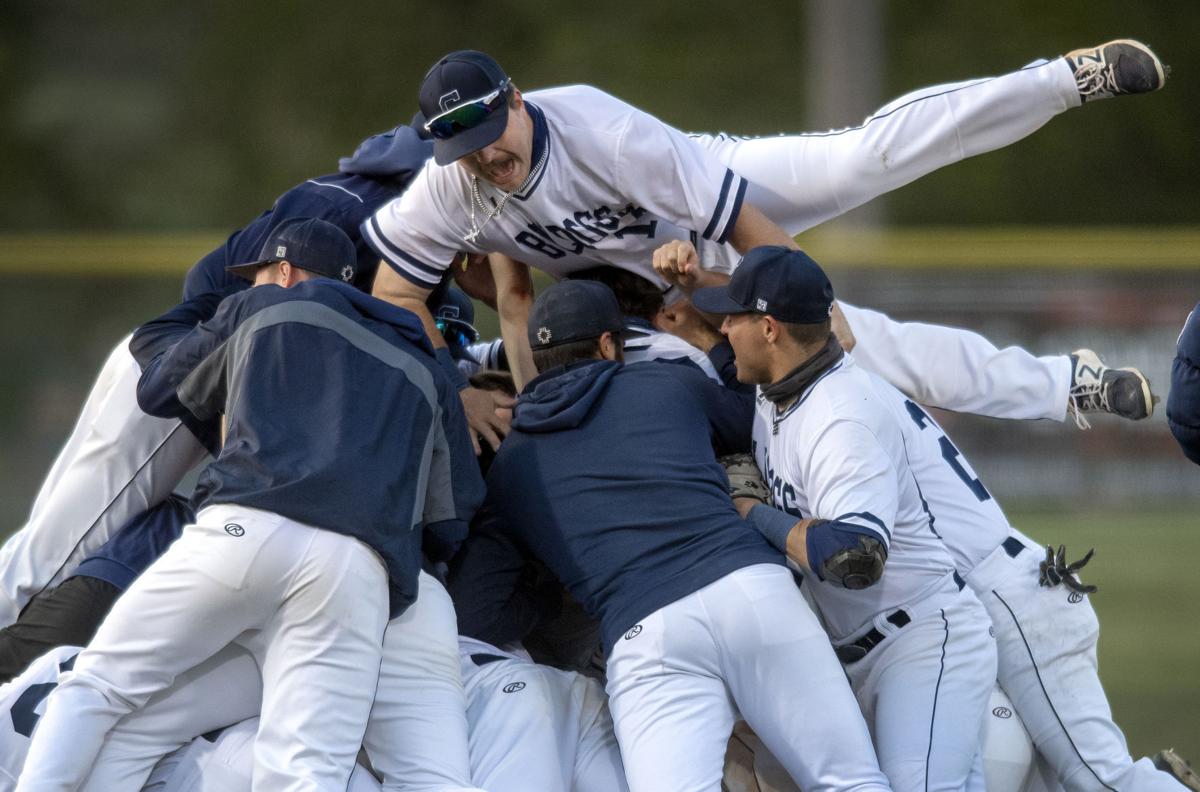 Concordia’s Keaton Candor (top) leaps on the pile of Bulldog players after they defeated Doane 7-2 in the GPAC baseball tournament championship on May 11 in Seward.

Ryan Dupic is pacing around a terminal at Omaha’s Eppley Airfield. This is what he does. Paces. His players once put a Fitbit on him as a joke.

Dupic is pondering the summer of 2014, when he took over a Concordia baseball program in sore shape. The Bulldogs hadn’t had a winning season in 35 seasons — in fact, there were winless seasons in the 1990s.

Dupic recalls his frame of mind seven summers ago as if it’s still fresh. Maybe it is, especially this week. He’s been asked if the pressure is more palpable when taking over a team in dire straits than a group that’s overachieving. Dupic, who played baseball at Iowa from 2002-05, came from Buena Vista, where he was the team’s pitching coach.

* A fresh face takes over a failing program. Enthusiasm ensues. Maybe he or she are the ones to turn it around! If it doesn’t work out? Well, he or she never had a chance!

* A fresh face takes over a surging program. Skepticism ensues. One foul step and, I miss (former beloved coach). But if success does follow, it flips to, Well anyone could coach this team. (Former beloved coach) left it in perfect shape.

Dupic said most of that conversation happened in the mirror.

“I think initially I probably felt the pressure more myself more than I did from other people,” Dupic said. “Everyone understood that we needed to establish some firm foundations. We’re really blessed, I think in the big picture we were able to turn it around relatively quickly, but I think initially there was some stress and anxiety to get this thing going.”

Dupic’s definition of “relatively quickly” differs from the general interpretation. Since he took over ahead of the 2015 season, the Bulldogs have rattled off seven consecutive winning seasons, three GPAC titles and now two planes are headed to Idaho for the NAIA World Series, which begins Friday.

Concordia is 42-10 in a season extending to a place that once seemed even further away than 1,236 miles, the distance from Seward to Lewiston, Idaho.

“It’s been a really fun ride and it’s reached its peak with our ability to use the momentum from previous years to build on to this year,” Dupic said.

Maybe you shouldn’t. The tricky thing about culture is it’s not something you can tangibly attribute to a team’s success like you can with, say, Jake Fosgett’s 9-0 record and 1.36 ERA on the mound this season or Keaton Candor’s .379 batting average and 13 home runs. But it’s there.

Dupic leads two book clubs on the team, one with juniors, one with seniors. Every year. The literature revolves around leadership — what it actually is, what it looks like, how to exude it, etc. — then pass it on to the underclassmen. The hope is that the cycle breeds a certain style in Seward.

“His big thing has always been leadership,” Candor said. “You and your guys need to lead each other because if he’s the one that has to do it, it won’t go as far. That’s kind of one of the legacies he’ll leave here. He’ll be here every day to do his part, but it’s on us to make sure we hold each other accountable.”

Dupic points to one specific time period where the trajectory of the program hit the sweet spot. In December 2016, as the team geared up for the 2017 spring season, Dupic was diagnosed with cancer. He couldn’t be around as much. Others needed to join together as one unit — the books came in handy.

“There was a lot of pretty honest conversations going on around at this point about if we really want this to be our group, our program, our team, It’s going to have to happen now or it’s just not going to happen,” Dupic said. “Our guys really took a strong hold of that in 2017. Then, the class of 2019 cemented the future so strongly that the new guys in the program didn’t know any different.”

Concordia opens the tournament against IU Southeast (Indiana) at 3 p.m. Friday. The Bulldogs are the No. 10 seed in the 10-team field. There are little expectations for the team from small-town Nebraska from a conference that has only produced one World Series appearance before this week.

Maybe that’s fitting. The Bulldogs have proven themselves when the stakes are low, the expectations even lower still. That’s the mood around the Concordia travel party this week, says Fosgett.

“We have nothing to lose.”

Here are sixteen great things to do in Kansas City this weekend, November 24-27, including A Christmas Carol, the Plaza Lighting Ceremony, and a holiday pop-up at Boulevard. Monet & Friends Alive  … END_OF_DOCUMENT_TOKEN_TO_BE_REPLACED

Jayla Williams is one of the first students to take college classes for UMKC for free/Courtesy photo Kansas City public high schoolers are in for a ride—to college, for free. The … END_OF_DOCUMENT_TOKEN_TO_BE_REPLACED

Fresh hand-made cappelletti/Courtesy of Zero Zero Mitch Fagan is a bit of a purist when it comes to crafting pasta by hand. His traditionalist mentality formed during his many trips … END_OF_DOCUMENT_TOKEN_TO_BE_REPLACED

Posted on November 21, 2022 The Kansas Chapter of the American Planning Association has recognized Downtown Overland Park as a Great Place in Kansas. ​​Great Places awards … END_OF_DOCUMENT_TOKEN_TO_BE_REPLACED

Annel Alvarez has been dancing Folklórico since she was five years old, but it wasn’t always the KCK native’s passion. Folklórico is a traditional cultural dance in Mexico and Central America that … END_OF_DOCUMENT_TOKEN_TO_BE_REPLACED