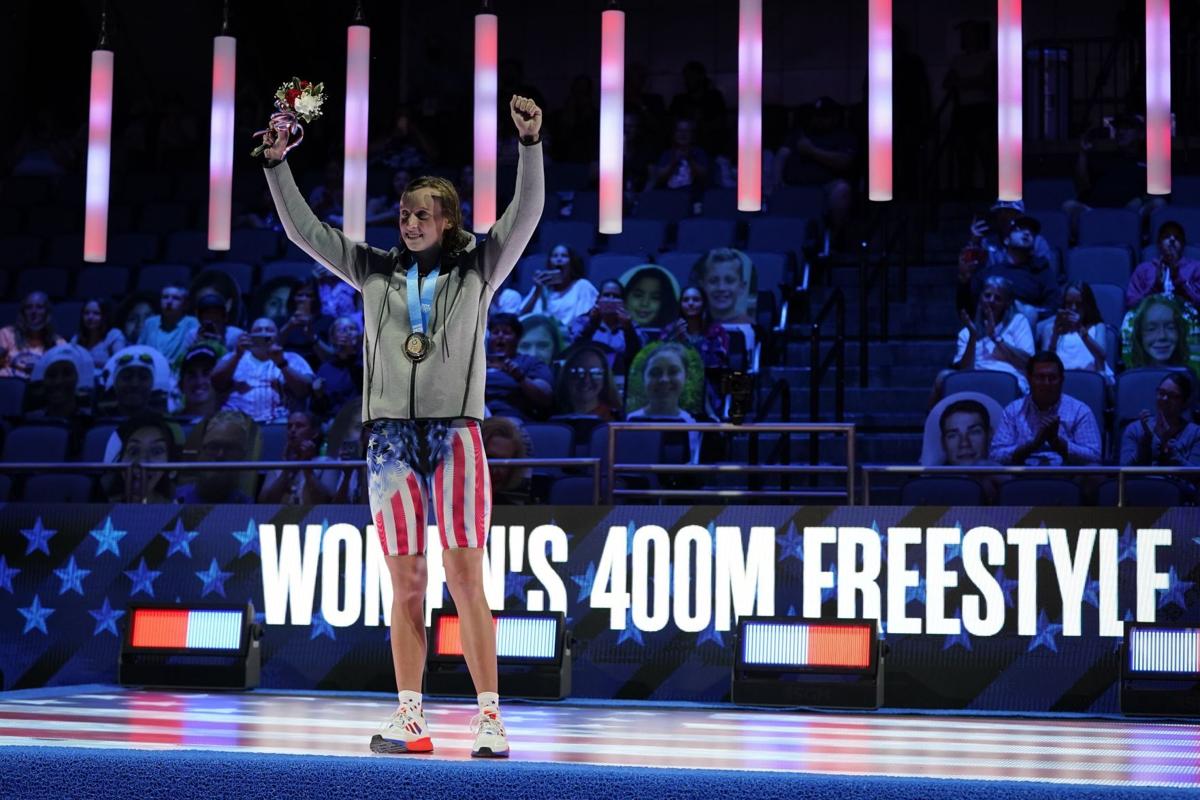 Katie Ledecky is honored for her victory in the women’s 400-yard freestyle final at the U.S. Olympic Swimming Trials on Monday at CHI Health Center Omaha. 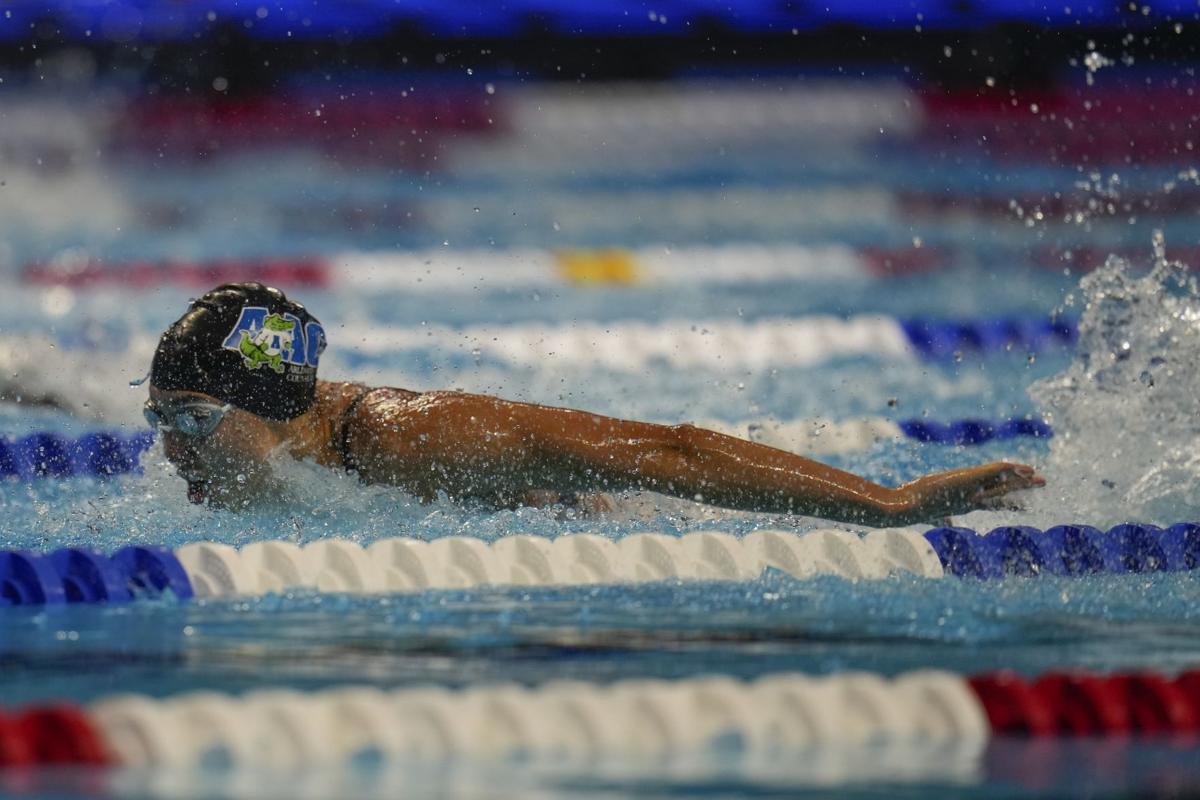 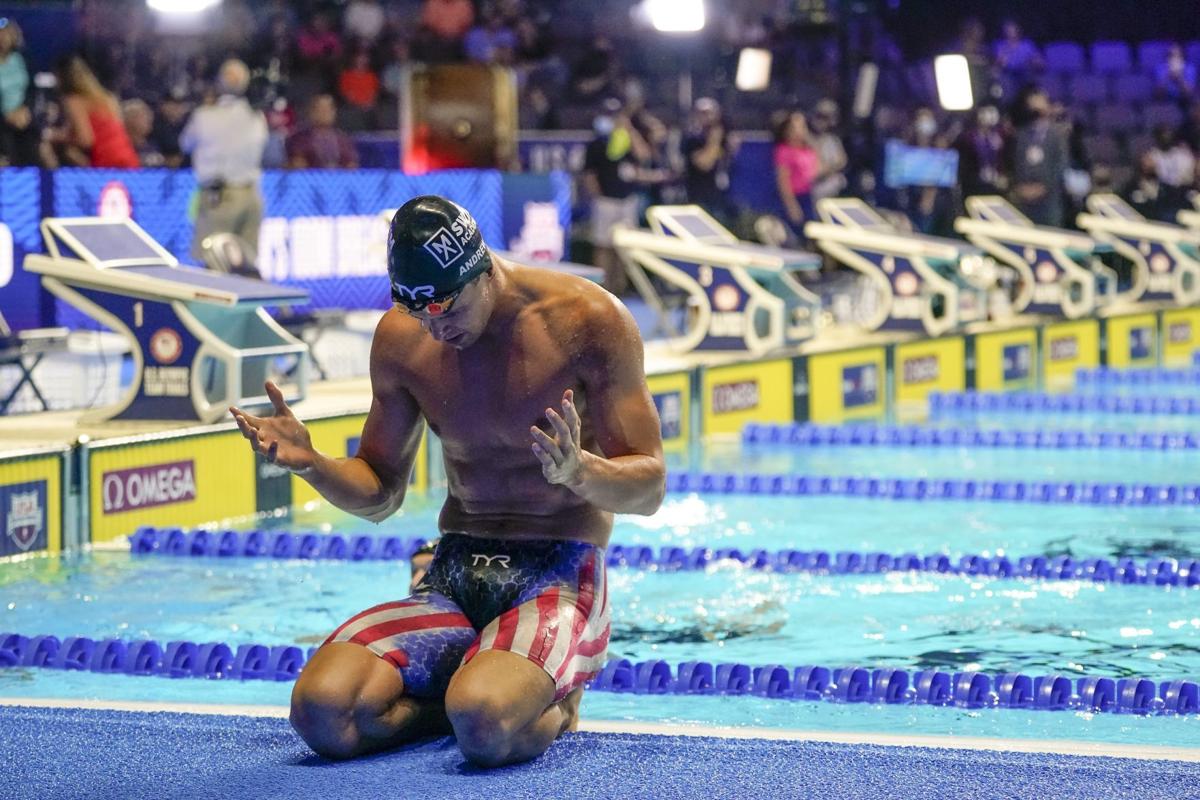 OMAHA — The last time a U.S. Olympic Swimming Trials didn’t feature someone named Michael Phelps, Bill Clinton was president, the show “Seinfeld” was still crushing it and Hotmail was born.

For five Olympic cycles Phelps-mania took over, and after winning some more medals at the 2016 Rio Games, the most decorated Olympian of all time retired from swimming for good.

Phelps isn’t even competing anymore — though he joked he could give it a go — and yet his presence remains heavy at this year’s trials at CHI Health Center Omaha.

Phelps was in the building Sunday and Monday, watching the action from a suite with his wife and his 5-year-old son Boomer.

He remains a face of the sport, and swimmers have fielded questions about Phelps each day in Omaha.

Chase Kalisz, who won the men’s 400-meter individual medley final Sunday night, was asked about how Phelps helped him in training for the event.

Caeleb Dressel, now considered the top men’s swimmer, was asked if he felt any burden in picking up the mantle left by swimming’s megastar.

“I don’t think that falls on my shoulders alone,” Dressel said. “Michael was one guy within USA Swimming, but he wasn’t USA Swimming.”

That’s being put to the test this week in Omaha.

With Phelps no longer in the spotlight and Ryan Lochte competing at the back end of his career (Lochte failed to get out the 200 freestyle prelims Monday), the trials have opened up opportunities for other future stars and Olympic hopefuls.

The women have some star power, led by Katie Ledecky, who has five Olympic gold medals and made her addition to this year’s Olympic team official by winning the 400 freestyle Monday night (The race wasn’t close).

Moments before Ledecky took the blocks, 2016 Rio gold medalist Lilly King won her semifinal heat of the 100 breaststroke, recording the world’s fastest time of the year, and the prime time window included 18-year-old Torri Huske, who appears to be a budding star herself.

Phelps, who spoke to the media Monday, doesn’t see a lack of star power.

“Going from 2000 to where we are today, being able to see how far we’ve come, that to me is so impressive,” said Phelps, who won 23 Olympic gold medals and 28 overall.

“I think we can go so much farther. We have a lot of amazing people that can help us do that.”

We can officially put Huske on the shortlist of swimming stars we’ll be talking about for future Olympics to come.

The Arlington, Virginia, native set an American record in the 100 butterfly during Sunday’s prelims, then reset the record in the semifinals, only to break it again 24 hours later.

She finished Monday’s final in :55.66. When her 50-meter time (:25.49) popped up on the big screen, the crowd gasped and then took the noise level up very quickly to help get Huske over the finish line in record time.

A very cool way to kick off Monday’s show. And for Huske, her first Olympics ticket.

“It’s my first trials so it’s kind of overwhelming just to be here,” Huske said. “The first day, (others) would probably tell you, I could not focus during when we were warming up, my mind was all over the place. But I feel like it’s nice just being able to experience something for the first time.”

* Ledecky won the 400 freestyle Monday night, but that wasn’t the most notable part of her trials start.

Ledecky and her college teammates Brooke Ford and Katie Drabot, who also are competing in Omaha, celebrated their graduation from Stanford poolside since they couldn’t attend commencement in California. The three posed for a photo with graduation caps and gowns on.

* Phelps said he got goosebumps walking onto the pool deck at CHI Health Center Omaha.

“Maybe put me in there,” he joked. “Let me do a time trial or something.

“It’s like I know something about this time of year. My body, my mind knows something.”

* Michael Andrew won the men’s breaststroke final in :58.73, edging Andrew Wilson by .01 of a second.

Photos: Check out the Monday sights from Wave II of the Olympic Swim Trials in Omaha

Mesoamericans called it food of the gods. From central Mexico down to Honduras, where the cacao tree grows native, ancient Olmecs, Mayans and Aztecs would gather the oblong fruit and break open its … END_OF_DOCUMENT_TOKEN_TO_BE_REPLACED

The definition of “comfort food” tends to vary depending on who you ask. At two new Brookside restaurants, Brady & Fox and Earl’s Premier, the term applies both to time-honored Irish recipes and East … END_OF_DOCUMENT_TOKEN_TO_BE_REPLACED

The King of Cass County’s bold vision for Harrisonville imploded. Can anyone revive it? It’s 5 pm on a Monday night in downtown Harrisonville. Only one other car is parked in the square. … END_OF_DOCUMENT_TOKEN_TO_BE_REPLACED

She says in her long life, the only constant is change, and she knows important changes are coming in Kansas. She’s faced battles/discrimination and stood up for LGBT+ rights throughout her life, and … END_OF_DOCUMENT_TOKEN_TO_BE_REPLACED

She says in her long life, the only constant is change, and she knows important changes are coming in Kansas. She’s faced battles/discrimination and stood up for LGBT+ rights throughout her life, and … END_OF_DOCUMENT_TOKEN_TO_BE_REPLACED