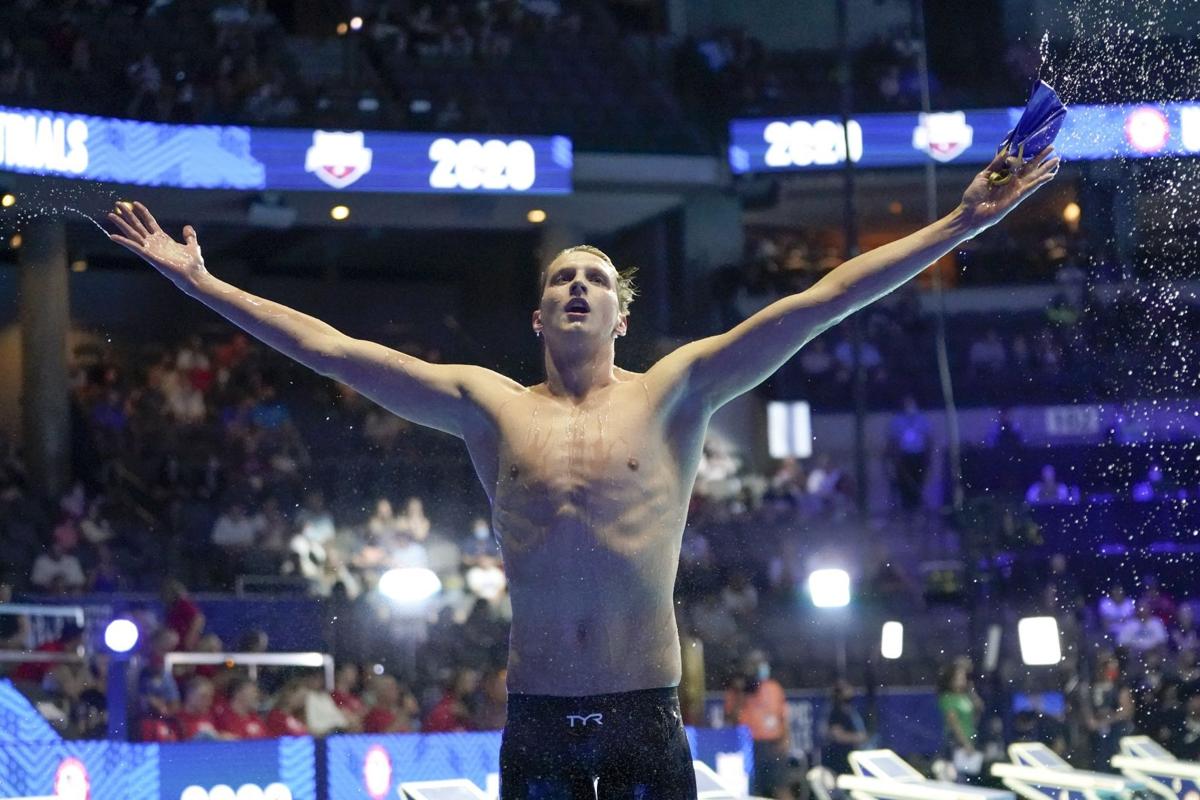 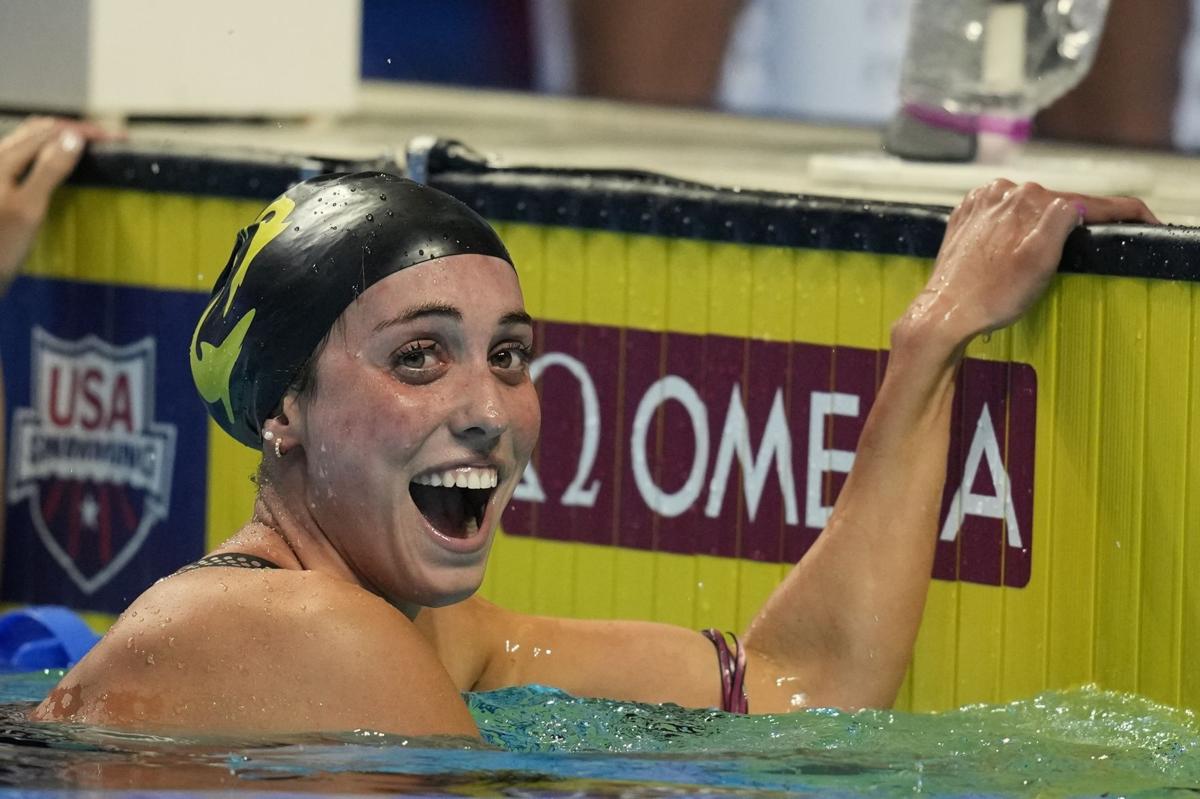 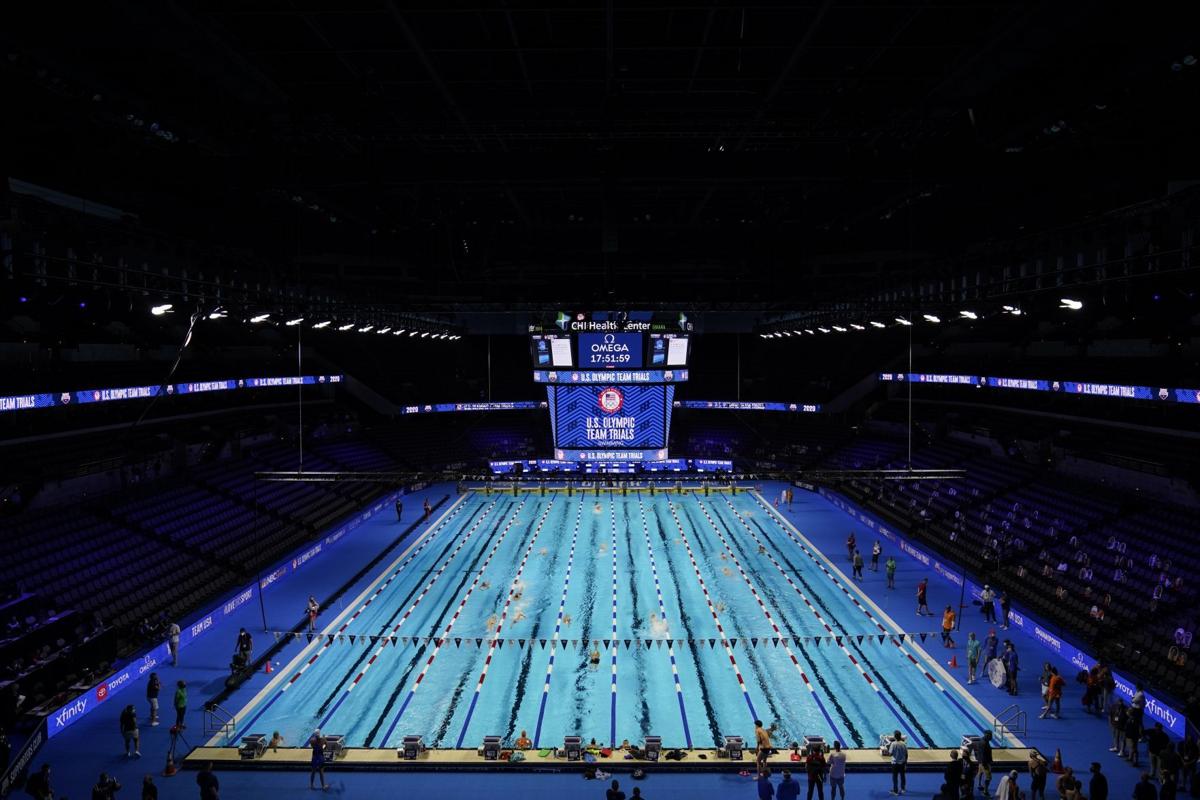 Swimmers warm up before the start of Wave II at the U.S. Olympic Swimming Trials on Sunday at CHI Health Center Omaha.

OMAHA — Just moments after the finalists for the men’s 400-meter individual medley splashed into America’s most popular pool for the week, the public address announcer had a message.

“Five years in the making and finally time to put someone on the U.S. Olympic team.”

About 4 minutes later, Georgia Bulldog Chase Kalisz earned his ticket to the Tokyo Summer Games. And just like that, the U.S. Olympic Swimming Trials at CHI Health Center Omaha were off.

Omaha had to wait an extra year, but the city and USA Swimming didn’t forget how to put on a great show. It looks different. Capacity is limited to 60% and fans were spread out through the arena Sunday night, but the lights were bright and flashy, the music was turned up, and the energy was high, especially over the final 50 meters when the swimmers finished off races.

The wait was a bit longer for swimmers, too. It meant an extra year of training for Olympic hopefuls. Some preferred it that way, including Kalisz, who had to put a bum shoulder behind him during this Olympic cycle.

For swimmers who began Olympic training immediately after the 2016 Games in Rio, and then added another year — one full of extra challenges and unknowns — this week offers excitement and a bigger payoff.

This week’s Olympic trials also mark the first time in a long time that swimmers are getting to compete in front of a lot of fans. Most college swimmers, for example, only swam in front of coaches and fellow swimmers last season.

“It was spectacular,” Kalisz said of Sunday’s environment. “I could hear the crowd on the breaststroke, and I could definitely hear (them) on the freestyle. I love that energy. I feed off that energy, and I think a lot of us do.

“Getting back to a little normalcy as we kind of progress through this pandemic, I’m just thrilled to have it.”

How fast the swimmers would go was among the big storylines at the 2021 swimming trials. So, too, was how the trials would look and feel at the back end of a pandemic, and if the trials would have the same juice without megastar Michael Phelps.

We may have some answers after Day 1 of Wave II in Omaha.

Michael Andrew, a rising 22-year-old star, set an American record in the men’s 100 breaststroke (58.19 seconds) in the preliminary round and then set a new mark (:58.14) just hours later in the semifinals.

Kalisz and second-place finisher Jay Litherland were the first to secure spots on the Olympic team, but it was the women who stole the show on opening day.

The most exciting race Sunday night was the women’s 400 IM final won by Florida’s Emma Weyant. She made some strong final pushes on the freestyle lap to win in 4:33.81. Arizona State’s Hali Flickinger was second at 4:33.96, and she just barely held off 2016 Rio gold medalist Melanie Margalis (4:34.08). Weyant’s and Flickinger’s times are the two fastest in the world this year.

There was no Ledecky on Sunday night, or sprinter Simone Manuel. Still, the American women, who have a chance to dominate the Olympics, are off to a splashy start in Omaha.

“It doesn’t get old, but it hurts a little more,” the 27-year-old told the crowd.

* Ledecky will take center stage Monday night when she goes for her first Olympic bid (400 freestyle).

Standing in the same location since 1857, the City Market is nearly as old as Kansas City itself. In the 1850s, over three hundred steamboats traveled on the Missouri River—including the Arabia before … END_OF_DOCUMENT_TOKEN_TO_BE_REPLACED

At 6 p.m. this Friday at the Kauffman Center, TEDxKC will have a lineup of ten speakers whose expertise range from a sky full of stars to the key to happiness to a MacArthur Genius. The theme is … END_OF_DOCUMENT_TOKEN_TO_BE_REPLACED

Mesoamericans called it food of the gods. From central Mexico down to Honduras, where the cacao tree grows native, ancient Olmecs, Mayans and Aztecs would gather the oblong fruit and break open its … END_OF_DOCUMENT_TOKEN_TO_BE_REPLACED

The definition of “comfort food” tends to vary depending on who you ask. At two new Brookside restaurants, Brady & Fox and Earl’s Premier, the term applies both to time-honored Irish recipes and East … END_OF_DOCUMENT_TOKEN_TO_BE_REPLACED

The King of Cass County’s bold vision for Harrisonville imploded. Can anyone revive it? It’s 5 pm on a Monday night in downtown Harrisonville. Only one other car is parked in the square. … END_OF_DOCUMENT_TOKEN_TO_BE_REPLACED