Former state lawmaker Ernie Chambers is known for seeking the censure of Nebraska judges he believes have acted outside the bounds of fairness, now, he has a new target.

Nebraska’s longest serving state Sen. Ernie Chambers of Omaha address supporters on the stairs of the Capitol in Lincoln, Neb., Thursday, Aug. 13, 2020, on the last day of a legislative session. Sen. Chambers, the state’s longest-serving and best-known lawmaker, is famous for his ability to single-handedly filibuster bills, often bringing the Legislature to a standstill. He was forced out of office for four years in 2009 due to newly enacted term limits, but returned to his old seat in January 2013. He served two more terms and will be forced out of office again in January 2021. On Thursday afternoon, more than 100 people gathered outside the Capitol to celebrate his tenure. (AP Photo/Nati Harnik)

LINCOLN, Neb. (AP) — Former state lawmaker Ernie Chambers is known for seeking the censure of Nebraska judges he believes have acted outside the bounds of fairn 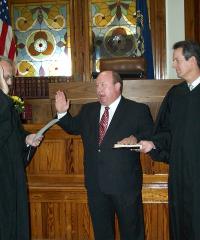 Hon. Douglas Luebe, courtesy of the state of Nebraska

Now, Chambers is targeting a judge in the state’s northeastern corner who saw the Nebraska Supreme Court overturn his denial of an adoption petition to a same-sex coup

Luebe described himself as “old-fashioned” in denying an adoption petition for a same-sex married couple last year. The state’s Supreme Court overturned that denial in March.

February is short but sweet. This month, we share our picks for the city’s best bonbons and a lot of other unique sweets that are baked, dipped and drizzled to perfection. By Dawnya Bartsch, Martin … END_OF_DOCUMENT_TOKEN_TO_BE_REPLACED

Photo by Caleb Condit and Rebecca Norden It’s Valentine’s Day month, but fancy chocolate deserves to be enjoyed year-round. We visited chocolatiers around the … END_OF_DOCUMENT_TOKEN_TO_BE_REPLACED

Posted on December 1, 2022 Overland Park now has more access to information about its Police Department than ever, thanks to a library of online transparency-focused … END_OF_DOCUMENT_TOKEN_TO_BE_REPLACED

The annual Beard Awards semifinalists nominations were just released and Kansas City’s food and drink scene has something to celebrate. The KC area has seven semifinalists by our count, including two … END_OF_DOCUMENT_TOKEN_TO_BE_REPLACED