State Rep. Chuck Basye, R-Rocheport, tells Missourinet that he returned to the Statehouse in Jefferson City on Wednesday. He says his symptoms were fairly mild compared to what others have experienced. One of his symptoms was fatigue, and Bayse says he slept a lot. 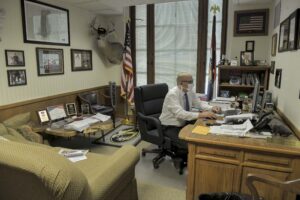 State Rep. Chuck Basye, R-Rocheport, works in his Capitol office as he waits to vote on a supplemental budget on April 8, 2020 (file photo courtesy of Tim Bommel at House Communications)

Basye is one of a number of Missouri lawmakers in both chambers who have battled COVID. The Missouri House missed a full week of session in January, due to the rising number of cases in the Capitol building.

His committee will have a busy morning on Tuesday. They’ll hear testimony on several education bills, including Basye’s legislation to establish a recall procedure for school board members.

The Centers for Disease Control and Prevention released new guidelines for people vaccinated for COVID-19 that will be good news for grandparents. (Photo by Johnny Cohen on Unsplash) WASHINGTON — … END_OF_DOCUMENT_TOKEN_TO_BE_REPLACED