(FOX 9) – For the first time in several years, we have had a drier than average summer. Since 2014, we’ve had some very wet summers, receiving copious amounts of rain often leading to flooding and some occasional severe weather. But, this year has clearly been different. Rainfall has been sporadic at best. Since June 1, much of Minnesota has received less than half the average rainfall for the period. Nearly half the state, including parts of the Twin Cities, have totaled even less, recording less than a quarter of the “typical” summer rains. This has led to widespread drought conditions with a severe to exceptional drought appearing in just about every spot statewide.

That is the most simplistic definition of a drought; a period of unusually dry weather that is persistent enough to cause water supply issues.

That supply starts with our top soil, the 4 feet of soil that is directly underneath our feet. This is where the bulk of our rainfall ends up and then gets used by most of our vegetation. Once this area begins to dry, there is less water running off into area lakes, rivers, and streams. That’s when these waterways start to fall which can be some of the first visible signs of a water shortage. If rain doesn’t show up at this point, then the topsoil dries out entirely and now the big problems begin. Grasses will begin to die, turning brown and crispy. Crops will stop producing their yields, leading to fewer ears of corn for example. Trees will become stressed and can actually go dormant to try and survive until next year.

The entire western portion of Minnesota is currently experiencing a extreme or severe drought, in the middle of what has been a very dry summer. Since less than 2% of the state’s farm land is irrigated, farmers who are very reliant on Mother Nature, have been let down.

And then of course there’s the water that we use for drinking, laundry, cooking and other everyday household uses. With both surface and ground water drying up, we start to use the excess well water that our pipes are attached to. While this is a great and often abundant source, using more of it during a drought can take years or even decades to replenish. Once that water is gone, then your faucets dry up and suddenly we don’t even have enough water to drink. Now, that’s obviously worst-case scenario that would take years of drought to produce, but it’s always a possibility because once a drought begins, it can be very difficult to get enough moisture for it to end. This is the main reason why cities implement water restrictions during a drought because overuse can certainly lead to long term water supply issues.

St. Paul Regional Water Services, which services St. Paul and several suburbs, is imposing watering restrictions amid ongoing drought conditions, including watering schedules and restrictions on when residents can water.

That is an overview of what it means to be in a drought, but now I want to hear from you. This will be an open thread, updated daily, with your questions about the drought. You can read the questions that have already been answered below. Have more questions? Email us at fox9news@fox.com, tweet us using #FOX9Weather or send a direct message to via Twitter, Facebook or Instagram and the FOX 9 Weather Team will answer it.

Be sure to download the FOX 9 Weather app to stay up to date on the latest weather and drought-related news, as well as forecasts to see when we’ll get rain next. Download it for Android or Apple.

What is the current state of our drought?

The easiest, shortest, and most concise way to show you the state of our drought, other than just showing pictures of dried up creeks and a VERY low Mississippi River, is with the image below. 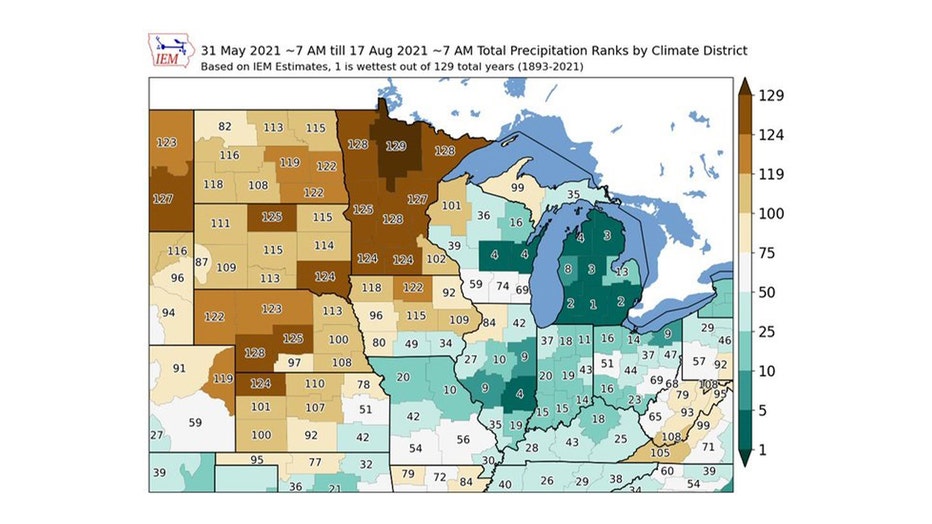 This shows the total precipitation rank for the amount of rainfall the Upper Midwest has seen since June 1. It breaks each state into 9 fairly equal sized districts and gives them a number. The number represents the district’s rank of rainfall based on the 129 years of reliable records. The higher the number, the drier the time frame when compared to average. For example, north central MN is shaded dark brown with the number 129. That means, in the last 129 years, this is the driest summer on record for north central Minnesota from June 1 until Aug. 17. Also notice that every other district, other than southeastern Minnesota, is in the top 5 driest since June 1. That is very telling and shows just how dry the last 10 weeks or so have been. On the opposite side of the coin, much of Lower Michigan has experienced one the wettest summers on record.

2021 Plaza Lighting Ceremony | Thursday, November 25 The Country Club Plaza will celebrate its Lighting Ceremony on Thanksgiving. It has been a local tradition for almost 100 years and started … END_OF_DOCUMENT_TOKEN_TO_BE_REPLACED

eep in the downtown headquarters of the Kansas City Police Department, there’s a roll of microfiche that spits out a stack of copy paper a full five inches thick. The file is marked “Roland T. Owen” … END_OF_DOCUMENT_TOKEN_TO_BE_REPLACED

When Tayanna Nelson and her husband started looking for a wedding photographer, they searched high and low for an inclusive photographer. “Everywhere I turned, people in our city had a stacked … END_OF_DOCUMENT_TOKEN_TO_BE_REPLACED

Here’s a round-up of Kansas City restaurant news for December 2021, including an exciting new lounge in the basement of the Hotel Kansas City and three big announcements in Westport, headlined by a … END_OF_DOCUMENT_TOKEN_TO_BE_REPLACED

Maverick Hiu, a Kansas City area native, is coming back to his hometown this week and bringing an entire Broadway troupe with him.  Hiu, who was born in Overland Park and lived there most of his … END_OF_DOCUMENT_TOKEN_TO_BE_REPLACED