For one Wisconsin father of three, being 45 years old “and not getting any younger” hasn’t stopped him from performing 3,000 pushups while competing in a marathon; dashing off 5,000 more during a 31-mile trail race, and (hopefully) scoring a new world record for completing a whopping 1.5 million-plus pushups over the course of a single year.

When social worker Nate Carroll launched his mission on June 14, 2020—Flag Day—his motivation was two-fold. First, he hoped to teach his children a lesson in the power of perseverance by offering them an example in real-time.

“[I wanted to] demonstrate to my kids what goals that seem impossible look like when they are broken down into daily manageable chunks,” he told FOX News.

But in addition to being a positive role model for his children, Carroll was also committed to raising money for a cause in which he truly believes: the Tunnel to Towers Foundation, an organization dedicated to easing financial burdens for the families of fallen first responders.

With a full-time job and shared parental custody, finding the time during his busy schedule to clock thousands of push-ups per day was one of Carroll’s biggest challenges.

“To set aside time to do 4,000 push-ups is impossible,” he told the Wisconsin State Journal. “You have to really make it a priority and be willing to commit to it and embrace the fact that you have to weave that into your day.”

And weave it in he did—at work, at home, and even while doing chores. Whenever an opportunity presented itself, he’d drop and give it his all.

On June 6th, Carroll completed the countdown to his record-breaking goal with a special 50-yard line halftime ceremony during the 48th annual Fun City Bowl at MetLife Stadium in East Rutherford, New Jersey.

“It was an honor to set a new world record here in New York in front of members of the [New York Police Department, New York Fire Department and Port Authority Police Department] and other first responders,” Carroll said in a statement issued by the Tunnels to Towers Foundation. “I want this record to pay tribute to the sacrifice made by so many heroes that tragic day.”

Even though he’d already surpassed the previous pushup record, Carroll continued to top off his tally as the final week of the competition year ticked down.

In order to claim a new Guinness World Record—ousting the current titleholder after an almost 32-year run—Carroll has been diligently documenting his accomplishments both in a logbook and with time-lapse video throughout his year-long odyssey. 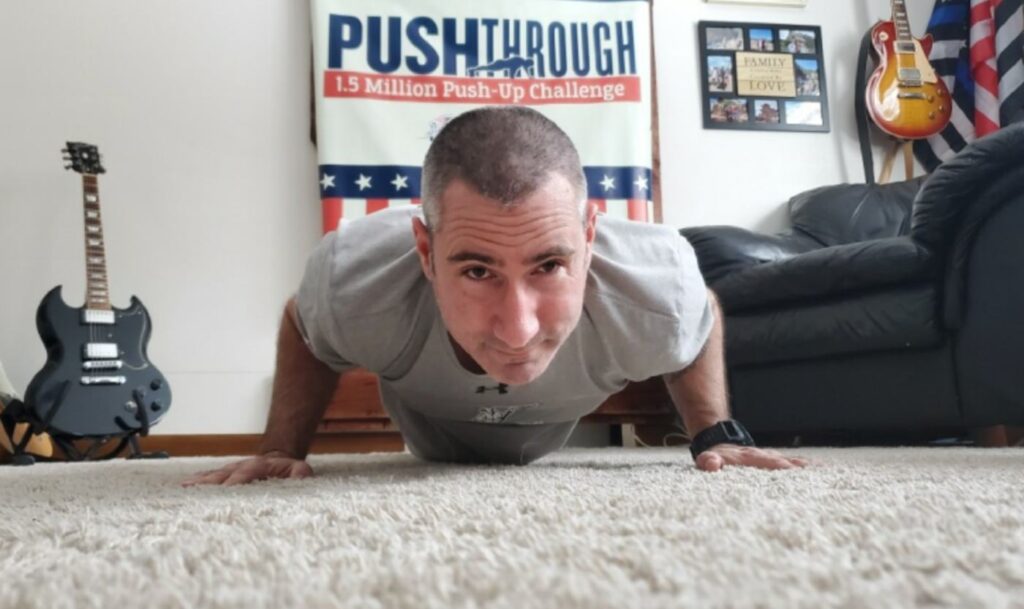 While he’s waiting for Guinness to verify the win, he hasn’t lost sight of his original inspiration.

“Set a goal, and get after it,” he told Fox News. “Make it who you are, not something you do. That way, when it gets hard and life throws obstacles in your way and offers you convenient excuses to stop or says it’s too difficult, you find a way to endure and persevere and keep after it. Winning those mini-battles each day builds strength and shapes one’s perspective of what is possible.”

RELATED: See How a Teacher Broke the World Record for Largest Single Drawing Made By One Person

Symbolizing that with dedication and fortitude, that which falls can rise again, a pushup may well be the perfect metaphor for all this amazing super-dad has achieved.

(WATCH the Tunnels to Towers Foundation video below.)

SHARE This Momentous Feat With Friends on Social Media…

Mesoamericans called it food of the gods. From central Mexico down to Honduras, where the cacao tree grows native, ancient Olmecs, Mayans and Aztecs would gather the oblong fruit and break open its … END_OF_DOCUMENT_TOKEN_TO_BE_REPLACED

The definition of “comfort food” tends to vary depending on who you ask. At two new Brookside restaurants, Brady & Fox and Earl’s Premier, the term applies both to time-honored Irish recipes and East … END_OF_DOCUMENT_TOKEN_TO_BE_REPLACED

The King of Cass County’s bold vision for Harrisonville imploded. Can anyone revive it? It’s 5 pm on a Monday night in downtown Harrisonville. Only one other car is parked in the square. … END_OF_DOCUMENT_TOKEN_TO_BE_REPLACED

She says in her long life, the only constant is change, and she knows important changes are coming in Kansas. She’s faced battles/discrimination and stood up for LGBT+ rights throughout her life, and … END_OF_DOCUMENT_TOKEN_TO_BE_REPLACED

She says in her long life, the only constant is change, and she knows important changes are coming in Kansas. She’s faced battles/discrimination and stood up for LGBT+ rights throughout her life, and … END_OF_DOCUMENT_TOKEN_TO_BE_REPLACED