In a huge first-round matchup in Top Fuel, Clay Millican got the better of Doug Kalitta, going 3.732 seconds at 323.50 mph to outrun Kalitta’s 3.804. It was a matchup of drivers ninth and 10th in the points standings, and it proved to be a key round win for 10th-place Millican, who is looking for a big weekend in Topeka.

He won the race in 2018 and the Midwest track has always been good to the fan favorite standout. Millican also isn’t too concerned with the points standings, knowing if his team runs to its potential his place in the Countdown to the Championship will be there. The round win against Kalitta certainly helped as well.

“I’m not a follow-the-points guy,” Millican said. “If we go out there and do what we’re supposed to do, it’ll take care of itself. But it’s definitely a fun time of the year.”

Millican will have lane choice when he takes on Mike Salinas in the second round.

In a rematch of the Sonoma final round, Steve Torrence and Leah Pruett delivered another great race, but unfortunately for Pruett, the result was the same. Torrence avenged his first-round loss in Pomona and slipped past Pruett by half a car length, going 3.736 at 325.61 to beat Pruett’s 3.776.

It ends Pruett’s bid for a third straight final round and although Torrence, a six-time winner in 2021, is firmly atop the points standings, the Texan and 2019 Topeka winner was geared up for the opening round matchup.

“It was a big matchup. They’ve been running really well and it’s a friendly rivalry there,” Torrence said. “It’s a huge first round win for us and we’re just going to try to keep going rounds.”

Torrence will meet Justin Ashley in the second round after Ashley beat Alex Laughlin on a holeshot.

Shawn Langdon took the win in the other marquee matchup in Top Fuel, going 3.900 at 307.16 to beat Antron Brown, who ran into trouble early in his run. 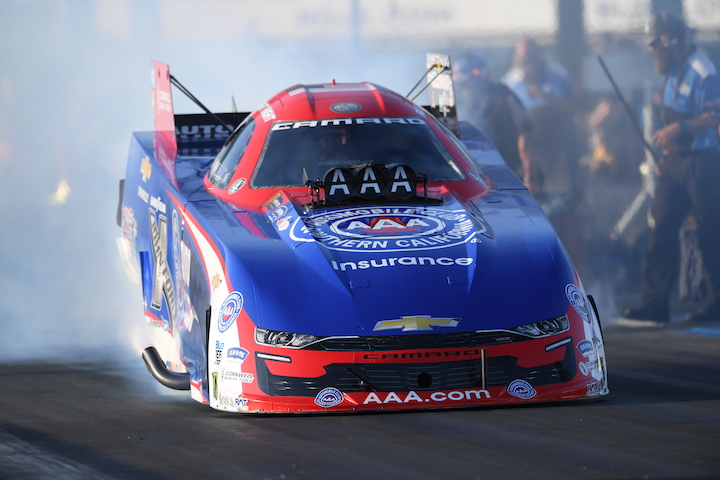 After struggling all weekend, Funny Car’s Robert Hight and his team picked an ideal time to get things turned around. Hight, the 2019 winner in Topeka, did not make a full pass – or anywhere near one – during the three qualifying sessions, qualifying 14th to set up a huge first-round matchup with Bob Tasca III.

Hight and his team, led by crew chief Jimmy Prock, stepped up in a major way, going 3.936 at 323.58 to beat Tasca’s 3.970. Tasca, who entered Sunday one point back of Ron Capps for the points lead, had a solid run, but Hight delivered a huge blast to advance to the second round, where he will meet John Force in a teammate vs. teammate duel.

“Those guys are tough and we had to bring our best game up there,” Prock said. “We came up with a decent plan.”

Added Hight: “This is the time of year when you need to have your act together.” 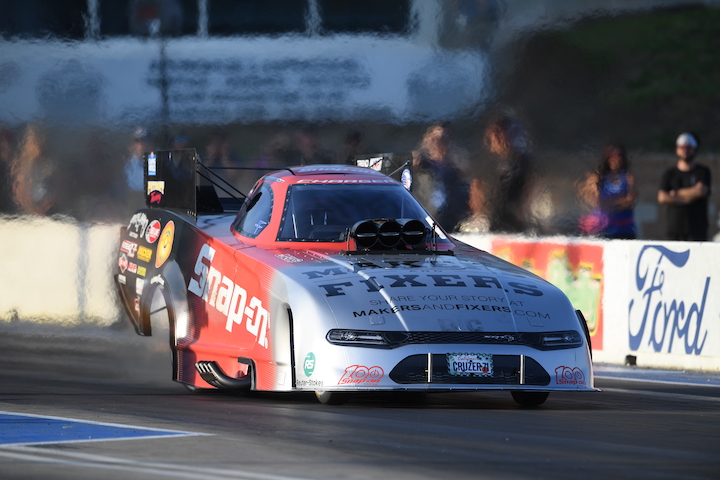 Cruz Pedregon endured a little more adversity than he had planned on Saturday, but the team appears to be doing just fine with the backup car. The Funny Car veteran had to go to that after his top-end incident with Tim Wilkerson, who crossed the center line and collided with Pedregon and then latched onto his car. Both went into the wall, meaning both needed new bodies for the rest of the weekend.

Oddly enough, they were matched up in the first round of eliminations. This time, there were no incidents and Cruz rolled to the win, going 4.014 at 316.01 to beat Wilkerson’s 4.044.

Pedregon will race Alexis DeJoria in the next round. Other second-round matchups include No. 1 qualifier J.R. Todd racing points leader Ron Capps, and Matt Hagan versus Blake Alexander. 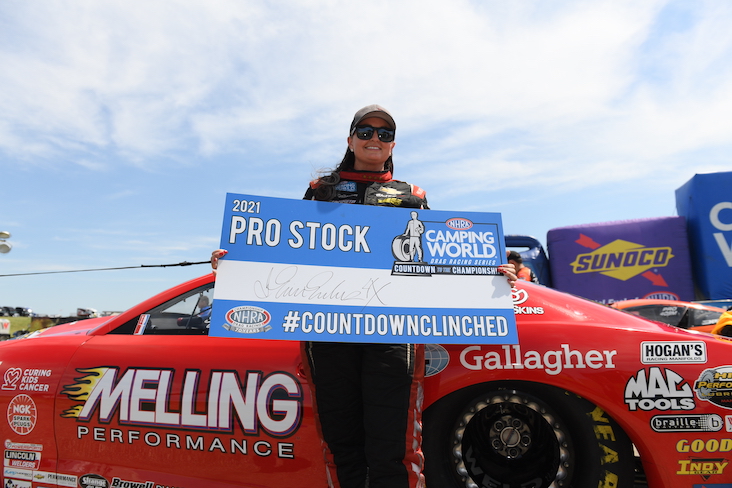 The end of the first round in Topeka also brought on a handful of drivers officially clinching their spots in the Countdown to the Championship playoffs, which begin next month at Maple Grove Raceway.

Joining Steve Torrence, who had long secured his spot, in Top Fuel was Antron Brown and Brittany Force, while Ron Capps and Bob Tasca III became the first drivers in Funny Car to qualify for the seven-race playoffs on Sunday.

An epic burndown turned into a double disqualification to kick off the first round of Pro Stock in a wild and unexpected fashion.

Bruno Massel and Mason McGaha engaged in a burndown that lasted nearly four minutes, but both drivers were eventually disqualified for refusing to follow starter Mark Hardy’s orders. They were both allowed to have a lengthy burndown until the drivers were prompted to get moving into the second staging light on more than one occasion.

When neither Massel nor McGaha budged after almost four minutes, Hardy ordered both cars to shut off. They were backed off the started line and each car was disqualified.

“It’s been too long,” Hardy said moments after. “We’ve got too much stuff going on out here and we don’t have time to play the games. We just had to shut them off and they’re done. They are both out.”

It means No. 1 qualifier Troy Coughlin Jr., who picked up a first-round win against Cristian Cuadra, will get a bye into the semifinals. After exiting the car, Massel wasn’t happy.

“Let’s put it this way, I don’t agree with the ruling,” Massel said. “We’re here to race, let us race. Everybody wants to see a burndown, they want to see the excitement and they want drama. It’s a shame. Mason wasn’t going to budge and neither was I.”

In taking that stand, both saw their raceday in a way nobody could have predicted. Moments later on the starting line, McGaha remained firm in his gameplan. 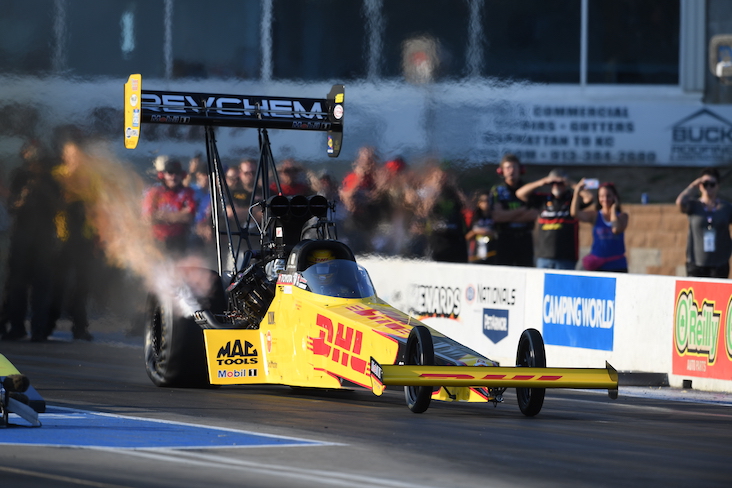 Shawn Langdon got the performance he and the team have been seeking, advancing to the semifinals with his close victory against Billy Torrence. Langdon went 3.812 at 313.80 to slip past Torrence’s 3.822 323.04 in a thrilling side-by-side race. Before that run, Langdon hadn’t advanced out of the second round since late May, but the DHL team dialed up something strong at a key moment.

That’s a big one. It’s no secret we’ve been struggling. It was good to see that and hopefully, we can build on that,” co-crew chief Kurt Elliott said.

With the round win, Langdon will race Clay Millican in the semifinals after he got past Mike Salinas on a holeshot. The other semifinal will feature Brittany Force and Steve Torrence in the latest chapter of their rivalry. Force went 3.747 on her bye run, giving her lane choice over Torrence, who beat Justin Ashley with a 3.787.

Things got a little hairy for Blake Alexander, but a stellar pedal job and some great driving sent him to the semifinals thanks to an entertaining victory against Matt Hagan. Alexander’s 4.126 beat Hagan’s 4.193 as both drivers got into trouble. Alexander pedaled a couple of times and got near the wall in the right lane, but he got it hooked up right before the finish line to slip past Hagan and reach the semifinals for the first time in 2021.

“I just did all I could and I gave it a little poke at the end once I realized I wasn’t going to hit the wall,” Alexander said.

Alexander will meet J.R. Todd for a berth in the finals after the No. 1 qualifier raced past points leader Ron Capps on a hoelshot. Todd went 3.996 to beat Capps’ 3.994 thanks to a great .059 reaction time on the starting line.

“Running against guys like Capps, if you can’t get up for him, you’re not alive. It’s been a fun week. We’re getting points and it would be nice to end the weekend with a win,” Todd said.

The other semifinal will feature a classic matchup between Cruz Pedregon and John Force. Pedregon knocked off DeJoria on a small holeshot after they each went 4.006, while Force had too much for teammate Robert Hight. 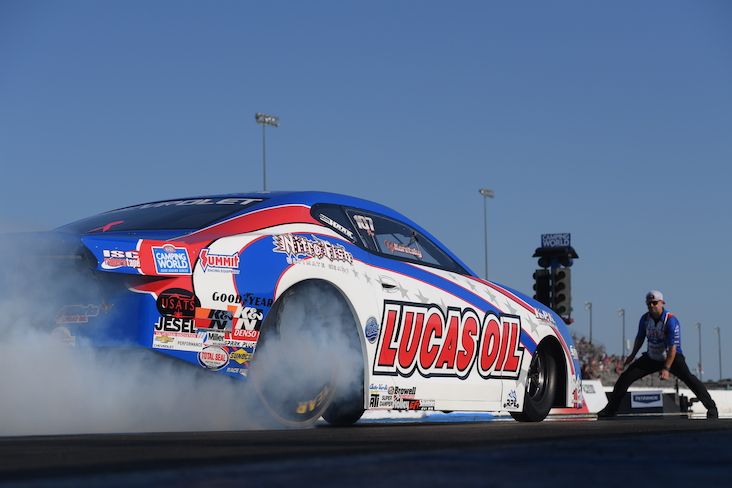 Kyle Koretsky is back in the semifinals for the third time in four races and he took out the boss to do it. The young Pro Stock standout took out points leader Greg Anderson on a holeshot, as his 6.671 held up against Anderson’s 6.655 thanks to a terrific .022 reaction time. Koretsky is still searching for his first career Pro Stock win and he’ll have to take out Erica Enders to reach the finals after the defending world champ had a 6.633 for the quickest run of the round.

Young guns Troy Coughlin Jr. and Dallas Glenn will face off in the other semifinal. 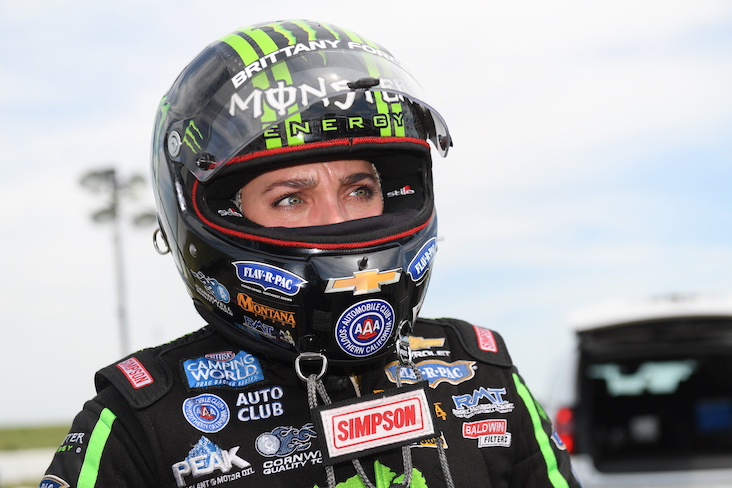 For the first time in 2021, Brittany Force got the best of Steve Torrence, this time in the semifinals in Topeka. Force went 3.769 at 326.24 to inch past Torrence, who went 3.814. Torrence had the starting line advantage, but Force tracked him down, putting her in an excellent position to finally grab that first victory this season after qualifying in the No. 1 spot six times.

She’ll have lane choice and all the momentum after Clay Millican slowed to a 4.561 against Shawn Langdon. It gave him the victory, as Langdon had trouble almost immediately, but Millican will likely need much more than that in the final round. 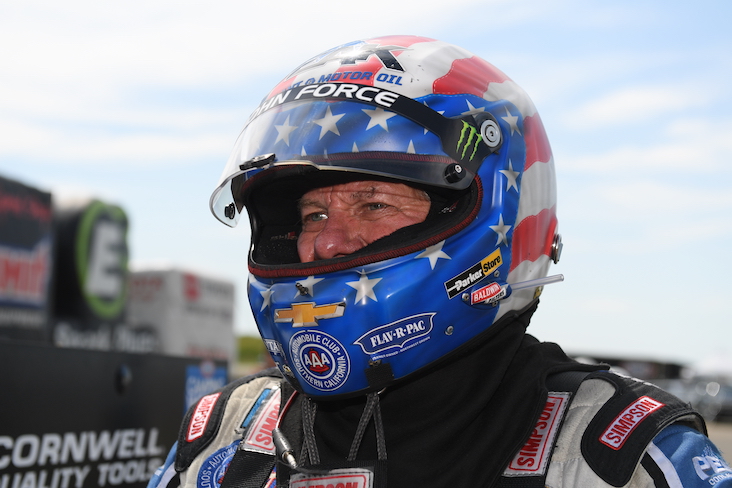 John Force ensured there’s a chance for a Force-Force double up, beating longtime rival Cruz Pedregon with a 4.005 at 321.35. Force will advance to his 260th final round and this time he’ll face off with J.R. Todd, who beat Blake Alexander with a solid 4.040. He’ll be the one trying to prevent John and Brittany from sharing the winner’s circle for the first time in NHRA history.

The final round winner will also take over the points lead in Funny Car. 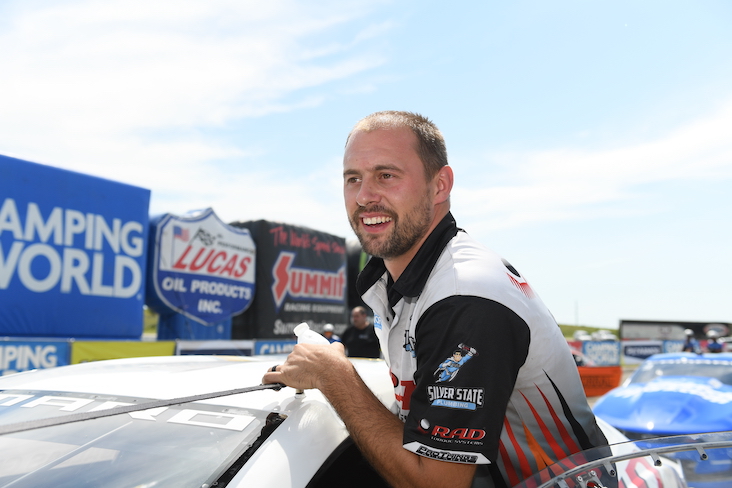 The Pro Stock final round will feature a pair of young KB Racing stars as both Kyle Korestky and Dallas Glenn picked up semifinal wins. Koretsky knocked off Erica Enders on a holeshot, with his .035 reaction time giving him enough on the starting line to beat Enders’ 6.648. Koretsky went 6.653 and will advance to his second career final round.

Dallas Glenn was a killer .006 on the starting line and drove past Troy Coughlin Jr., advancing to his third final with a run of 6.659.

Posted on December 6, 2021 Deck the halls? More like deck the whole city. One of the most fun pastimes during the holiday season is driving around to see the festive lights on … END_OF_DOCUMENT_TOKEN_TO_BE_REPLACED

If her life hadn’t been in danger in Afghanistan, Sina Baha wouldn’t be in Kansas City. “Under normal circumstances, no one wants to leave their homes, their jobs, their family and move to an unknown … END_OF_DOCUMENT_TOKEN_TO_BE_REPLACED

The pandemic threw a wrench in many people’s holiday shopping. What used to be trips to stores and markets with the family to find the perfect gift turned into Amazon wish lists and online gift cards. … END_OF_DOCUMENT_TOKEN_TO_BE_REPLACED

Rhonda LeValdo travels from Lawrence to Kansas City for every Chiefs home game, but she’s never actually been inside Arrowhead Stadium. Instead, she stands by a bus stop at the corner of Red Coat Lane … END_OF_DOCUMENT_TOKEN_TO_BE_REPLACED