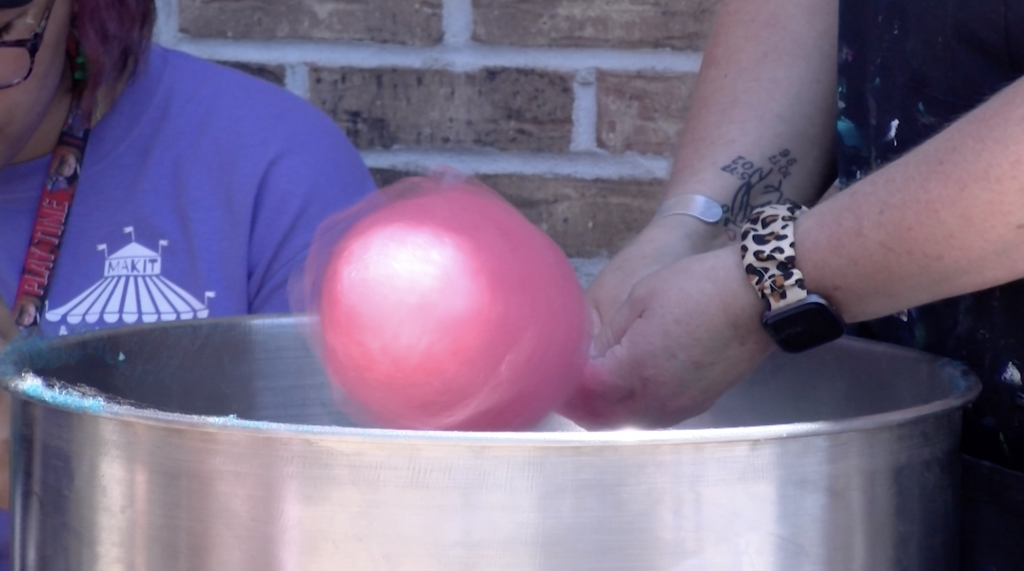 LINCOLN, Neb. (KLKN) – Outdoor public markets were few and far between in 2020.

“We just moved here in January and so we decided to take advantage of our big parking lots and we invited vendors who have been really hit hard during the pandemic, haven’t been able to have in-person shows, and so we just figured we would make one,” Nelson said.

The Curtis family says it was nice to get outdoors and enjoy all the Makit Market had to offer.

“It’s refreshing to not have to wear masks and be able to enjoy the nice weather amongst friends and those you haven’t met,” Jonathan Curtis, a father of four, said.

Ella Curtis, a big sister to three younger brothers, says it’s great for the family to get outside after a hectic year in 2020.

“My parents both got COVID at the same time, so I had to babysit [her three brothers] for like a week until we realized that we all had it, so yeah, that was kind of crazy,” she said. “Being able to get out of the house and having them not be cooped up and getting to do something fun, and obviously getting slushies, I know that they love that.”

Vendors are appreciative that they are able to conduct normal business more frequently than they were able to last year.

“For all businesses, it’s been hard, but we’ve managed to make it,” Darrell Winford Jr. of GrannyWeavs Soul Food and Catering said. “As long as we keep doing what we’re doing, people keep coming out to support, we’ll keep doing business.”

“The last year was really slow,” Cat’s Canines owner Catherine Collier said. “It was really hard, but we’ve kind of been getting back to to normal. It’s been really nice to interact with people again without having masks on.”

Nelson says she’s happy to give families something to do while helping out small businesses after a trying year.

“I’m so excited,” she said. “It’s so great to have so many of our customers come out. We have people who have never been to our store before, so to be able to share, Makit Takit with them and just all these other vendors that have had such a hard year, to be able to bring customers to them, it’s been really good.”

Next year Worlds of Fun will reach fifty years of business, and to celebrate it is bringing back one of its most legendary roller coasters: the Zambezi Zinger. At the time of Worlds of Fun’s opening … END_OF_DOCUMENT_TOKEN_TO_BE_REPLACED

Standing in the same location since 1857, the City Market is nearly as old as Kansas City itself. In the 1850s, over three hundred steamboats traveled on the Missouri River—including the Arabia before … END_OF_DOCUMENT_TOKEN_TO_BE_REPLACED

At 6 p.m. this Friday at the Kauffman Center, TEDxKC will have a lineup of ten speakers whose expertise range from a sky full of stars to the key to happiness to a MacArthur Genius. The theme is … END_OF_DOCUMENT_TOKEN_TO_BE_REPLACED

Mesoamericans called it food of the gods. From central Mexico down to Honduras, where the cacao tree grows native, ancient Olmecs, Mayans and Aztecs would gather the oblong fruit and break open its … END_OF_DOCUMENT_TOKEN_TO_BE_REPLACED

The definition of “comfort food” tends to vary depending on who you ask. At two new Brookside restaurants, Brady & Fox and Earl’s Premier, the term applies both to time-honored Irish recipes and East … END_OF_DOCUMENT_TOKEN_TO_BE_REPLACED