LINCOLN, Neb. (KLKN) — A shoplifting call leads Lincoln Police to arrest a man connected to a string of crimes spanning more than a year.

Tuesday, Dec. 8 police were called to Costco, 1620 Pine Lake Rd around 1:30 pm. Loss Prevention employees said a man and a woman stole a cart full of electronics, clothing, and other personal items.

According to Costco employees, the man pushed the cart out of the store without paying while the woman pretended to look for a receipt as if they had paid. The total loss is estimated at $3,000.

Thursday, Dec. 17 officers were called back to the same Costco around 4 pm on another shoplifting report. An employee said the same man was in the store with a different woman.

The man was running away as Costco staff chased after him when police arrived. Despite officers pulling up next to him, the man got in his car and sped out of the parking lot. Costco employees said the man was able to leave the stole with $2,600 in merchandise, but abandoned the cart when they chased after him. 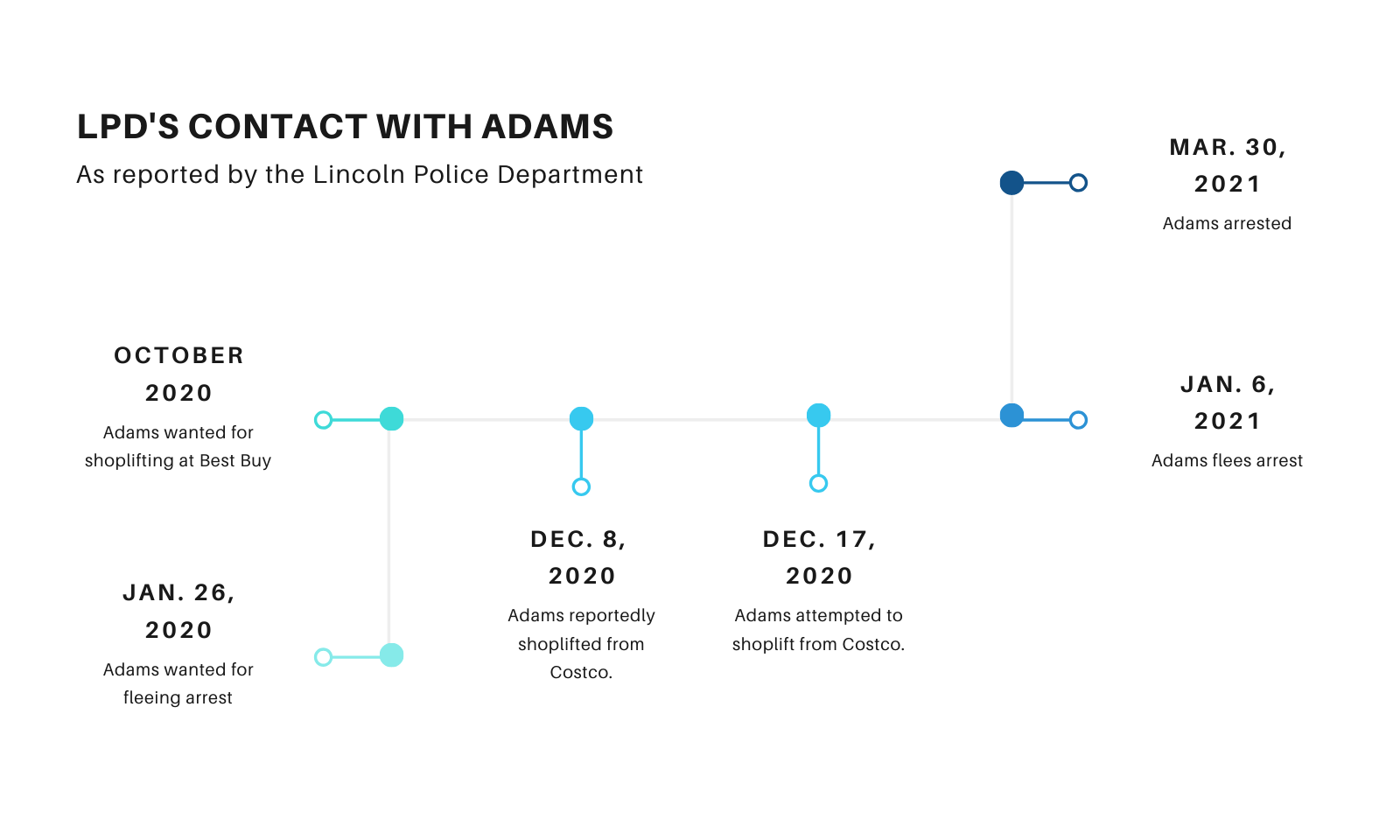 Adams had an active warrant for his arrest on top of being wanted locally for fleeing arrest in January of 2020 and for shoplifting $2,000 worth of times from Best Buy in October.

Wednesday, Jan. 6 officers attempted to take Adams into custody near 1st and “A” Streets, but he quickly sped away when he spotted police.

Finally, on Tuesday, Mar. 30 Adams was arrested at his home. He faces three counts of felony shoplifting in addition to his active warrants.

Next year Worlds of Fun will reach fifty years of business, and to celebrate it is bringing back one of its most legendary roller coasters: the Zambezi Zinger. At the time of Worlds of Fun’s opening … END_OF_DOCUMENT_TOKEN_TO_BE_REPLACED

Standing in the same location since 1857, the City Market is nearly as old as Kansas City itself. In the 1850s, over three hundred steamboats traveled on the Missouri River—including the Arabia before … END_OF_DOCUMENT_TOKEN_TO_BE_REPLACED

At 6 p.m. this Friday at the Kauffman Center, TEDxKC will have a lineup of ten speakers whose expertise range from a sky full of stars to the key to happiness to a MacArthur Genius. The theme is … END_OF_DOCUMENT_TOKEN_TO_BE_REPLACED

Mesoamericans called it food of the gods. From central Mexico down to Honduras, where the cacao tree grows native, ancient Olmecs, Mayans and Aztecs would gather the oblong fruit and break open its … END_OF_DOCUMENT_TOKEN_TO_BE_REPLACED

The definition of “comfort food” tends to vary depending on who you ask. At two new Brookside restaurants, Brady & Fox and Earl’s Premier, the term applies both to time-honored Irish recipes and East … END_OF_DOCUMENT_TOKEN_TO_BE_REPLACED