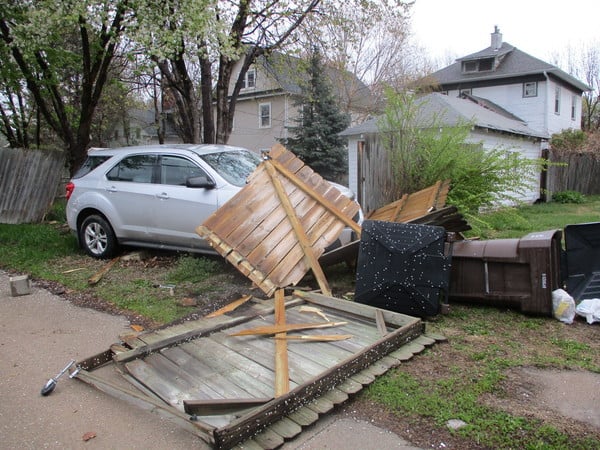 LINCOLN, Neb. (KLKN) — Saturday morning, around 7 am, officers with the Lincoln Police Department (LPD) responded to a car crash in an alley near S 27th and ‘N’ Streets.

When LPD arrived on the scene, they found that a 2012 Silver Chevy Equinox had barreled through a fence and garage, causing significant damage. There were no plates on the car.

CRIME NEWS: LPD: $3,000 in cigarettes stolen from Stop and Shop

The driver,  50-year-old Annette Kitsmiller, was also unable to provide proper ID or paperwork for the Chevy. Officers later learned the woman had purchased the car in September of 2019 but had failed to register it.

The initial damage to the property was estimated at $1,500. However, as Kitsmiller was backing away from the fence, LPD reported that her car accelerated at 20-30 mph and weaved down the alley. She eventually crashed into another garage at the end of the alley.

The estimated damage to the second garage was $5,000.

Kitsmiller refused to get out of the car, laughed at officers, and locked the car doors according to LPD.

Eventually, officers were able to enter the car and remove Kitsmiller from the Chevy. She continued to threaten and kick at the officers.

The driver was argumentative and was ultimately cited on several charges.

Photo by Caleb Condit and Rebecca Norden It’s Valentine’s Day month, but fancy chocolate deserves to be enjoyed year-round. We visited chocolatiers around the … END_OF_DOCUMENT_TOKEN_TO_BE_REPLACED

Posted on December 1, 2022 Overland Park now has more access to information about its Police Department than ever, thanks to a library of online transparency-focused … END_OF_DOCUMENT_TOKEN_TO_BE_REPLACED

The annual Beard Awards semifinalists nominations were just released and Kansas City’s food and drink scene has something to celebrate. The KC area has seven semifinalists by our count, including two … END_OF_DOCUMENT_TOKEN_TO_BE_REPLACED

As we look ahead to 2023, let’s take time to reflect on 2022, another busy year in our community. Here are just a few highlights of the many programs, events and services the City provided this … END_OF_DOCUMENT_TOKEN_TO_BE_REPLACED