Los Angeles city leaders approved a sweeping ordinance Wednesday that would restrict homeless encampments in certain areas as the issue continues to become a flashpoint in parts of the city overrun with tents, crime, trash and other quality of life issues.

The City Council voted 13-2 to endorse the measure, with Councilmembers Nithya Raman and Mike Bonin opposing. Mayor Eric Garcetti still needs to sign the ordinance for it to go into effect 30 days after.

The ordinance bans sleeping and camping in certain areas of the city and within 500 feet of schools, day care facilities, parks and libraries.

Outreach teams will offer shelter and service before any enforcement takes place. Enforcement will not occur until leaders have signed off on each location individually and outreach workers will return over a three-month period to see if homeless people return.

Additional outreach will be conducted if they do, which means it could take up to four months to relocate people and clear an encampment, the Los Angeles Times reported.

Fox News has reached out to Garcetti’s office as well as the offices for Bonin and Raman. Both councilmembers are facing recall efforts over their handling of the homelessness crisis and crime in their districts.

“People want housing,” Bonin said during Wednesday’s meeting. “They do not want warehousing. They don’t want shelter. They want housing.”

He noted that the Los Angeles Homeless Services Authority said several weeks that shelter beds were only available for 39% of the unhoused population in Los Angeles County.

In a statement released after the vote, Bonin elaborated on his dissenting vote.

“Most simply put, I voted against this ordinance because it tells people who are unhoused and unsheltered and have no place to go where they cannot sleep,” he added. “It does nothing to tell them where they can sleep.”

In a Twitter post before the council vote, Raman stated her objections to the ordinance and why she planned to vote against it.

“Because we set homelessness policy in our own districts, Councilmembers end up competing for scarce resources, implementing redundant services, and shuffling encampments from place to place,” she wrote. “Today’s ordinance will entrench that dysfunctional dynamic.”

Critics allege the measure will criminalize homelessness in a region grappling with a shortage of affordable housing.

“A bold and creative vision is needed to dramatically grow housing supply and fix systems that drive inflow into homelessness,” Amy Turk, the CEO for the Downtown Women’s Center, a women’s homeless service provider, said in a statement to FoxNews. “But implementing the ordinance restrictions without first providing clarity as to how we are engaging unhoused residents and where they can ultimately go only increases the odds of displacement and further traumatization.

Councilman Paul Koretz disagreed Wednesday, saying it instead “creates a new framework to keep portions of our public right-of-way accessible to everyone.”

In recent months, residents in some neighborhoods have voiced frustrations about encampments and the violent crime that often accompanies them. In Venice, tents are lined up along its famous boardwalk and have been seen on the beach, along with drugs and garbage.

Since the expansion of the tent city, there have been shootings, fires, assaults and complaints of harassment from residents and visitors. A recent video posted online shows a fire inside a tent erected on the boardwalk while another shows a naked man on the beach in broad daylight as joggers and bicyclists pass by.

Mary Ryavec, president of the Venice Stakeholders Association, told Fox News he was going to look and see what impact the ordinance has before celebrating.

“I’m not jumping up and down,” he said. “I’m encouraged that they finally had taken some action in the right direction but it’s all got to be implemented.”

Chie Lunn, a Venice resident who is suing the city over its response to the homelessness crisis, said drug rehabilitation and job training is also needed to give many of those living on the street a form of structure.

Venice resident Deborah Keaton said she isn’t optimistic that the ordinance will have any impact on the large encampment just 20 feet from her home.

“They must be forced to move,” she told Fox News. “If this doesn’t force them to move to areas where they are not interfering with the residences, schools and businesses, what good will it do?”

Keaton said she lives about 20 feet from a large tent encampment where the homeless have tapped into nearby power lines to run their stereo systems and televisions late into the night.

“They party all night and the police are called everyday to cite them for disturbing the peace. But they are not going to go anywhere and this will not help that situation,” she said. 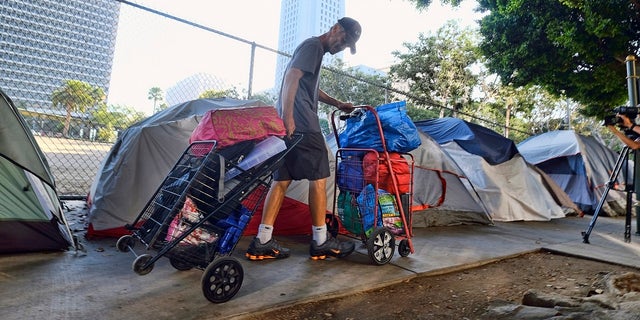 In this July 1, 2019 file photo, a homeless man moves his belongings from a street near Los Angeles City Hall, background, as crews prepared to clean the area. The Los Angeles City Council has passed a sweeping anti-camping measure to remove widespread homeless encampments that have become an eyesore across the city. (AP Photo/Richard Vogel, File)

Bonin, who represents Venice and other westside neighborhoods and was once on the verge of homelessness, and Raman, who has only been in office a few months and represents Hollywood and other areas, have pushed back against strong-handed proposals to clean up homeless encampments.

Last month, Bonin said he wanted to clear the Venice encampment by August. In a message to constituents on Monday, he said 160 unhoused people in Venice had been brought indoors and connected to permanent housing services.

Montana State announced Tuesday, for the first time at Bobcat Stadium, alcohol can be purchased at a beer garden at the stadium’s northwest corner. Montana made a similar announcement for … END_OF_DOCUMENT_TOKEN_TO_BE_REPLACED

A pair of fall exhibitions with Creighton and Wichita State headline the Nebraska baseball team's fall slate at Hawks Field at Haymarket Park, it was announced Tuesday. September 7, 2021 … END_OF_DOCUMENT_TOKEN_TO_BE_REPLACED

First graders, from left, Isreal Dani, Ian Smith and Ashton Brooks listen to first grade teacher Karin Versen read a book out loud to the class on the first day of school on Aug. 23 at Patrick Henry … END_OF_DOCUMENT_TOKEN_TO_BE_REPLACED

Turns out that birdie Jon Rahm made on the final hole of the Tour Championship earned him a trophy.Rahm won the points-based player of the year award from the PGA of America, and it was that birdie … END_OF_DOCUMENT_TOKEN_TO_BE_REPLACED

We use cookies on our website to give you the most relevant experience by remembering your preferences and repeat visits. By clicking “Accept All”, you consent to the use of ALL the cookies. However, you may visit "Cookie Settings" to provide a controlled consent.
Cookie SettingsAccept All
Manage consent

This website uses cookies to improve your experience while you navigate through the website. Out of these, the cookies that are categorized as necessary are stored on your browser as they are essential for the working of basic functionalities of the website. We also use third-party cookies that help us analyze and understand how you use this website. These cookies will be stored in your browser only with your consent. You also have the option to opt-out of these cookies. But opting out of some of these cookies may affect your browsing experience.
Necessary Always Enabled
Necessary cookies are absolutely essential for the website to function properly. These cookies ensure basic functionalities and security features of the website, anonymously.
Functional
Functional cookies help to perform certain functionalities like sharing the content of the website on social media platforms, collect feedbacks, and other third-party features.
Performance
Performance cookies are used to understand and analyze the key performance indexes of the website which helps in delivering a better user experience for the visitors.
Analytics
Analytical cookies are used to understand how visitors interact with the website. These cookies help provide information on metrics the number of visitors, bounce rate, traffic source, etc.
Advertisement
Advertisement cookies are used to provide visitors with relevant ads and marketing campaigns. These cookies track visitors across websites and collect information to provide customized ads.
Others
Other uncategorized cookies are those that are being analyzed and have not been classified into a category as yet.
SAVE & ACCEPT