LINCOLN, Neb. (KLKN) – The Equality Act has received a lot of national attention this week, but local advocacy group leaders say the ramifications of the bill hit close to home for Nebraskans as well.

The bill, which passed through the House of Representatives on Thursday, would amend the Civil Rights Act to protect people from being discriminated against on the basis of sexual orientation and gender identity, specifically in areas like housing, public health, public spaces, and others. Abbi Swatsworth, the executive director of OutNebraska, says the bill provides the LGBTQ community necessary protections.

“Nebraska’s state motto is “Equality Before the Law,” but we have a patchwork of protection right now,” Swatsworth said. “We don’t have comprehensive protection, which is what the Equality Act would provide.”

Locally, there are several state bills pertaining to sex and gender identity being debated on as well. 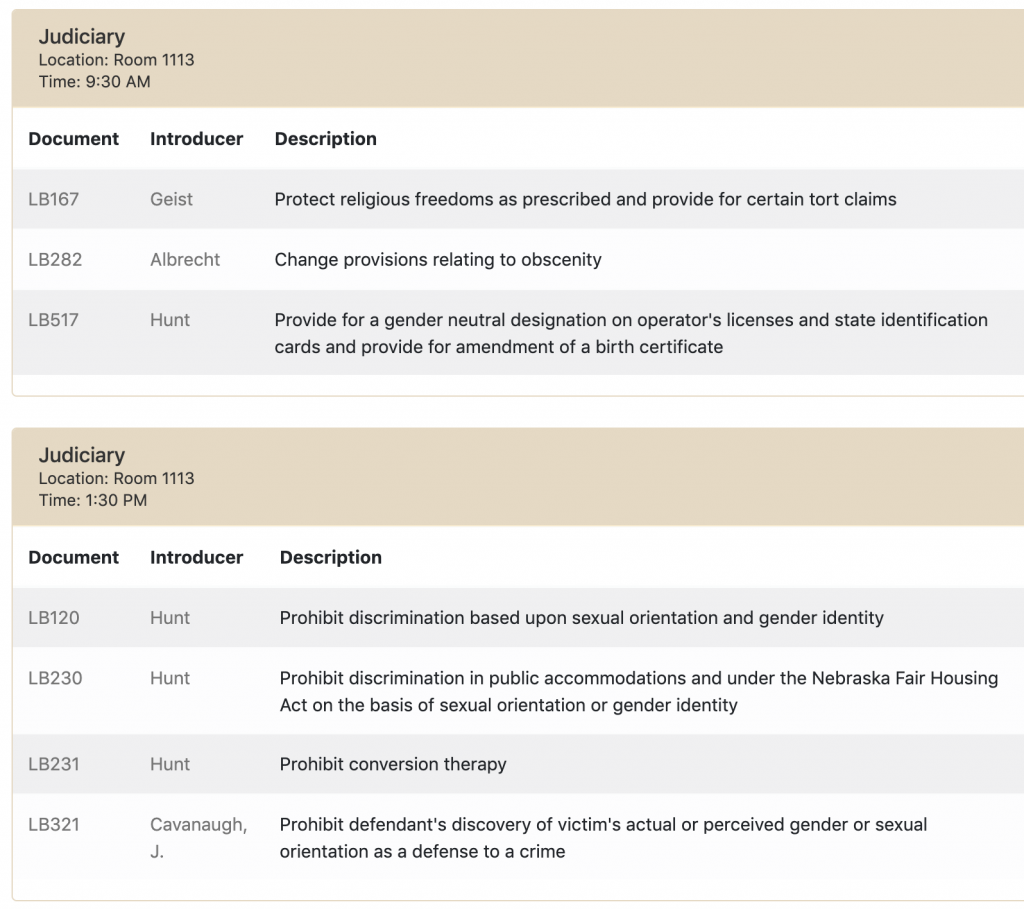 Nate Grasz, the policy director of the Nebraska Family Alliance, says opponents of the Equality Act and similar bills at the state level are concerned that it will undermine their religious beliefs.

“It shouldn’t be the job of government to try to force people to have to conform to a government-mandated belief system,” Grasz said. “And they certainly shouldn’t be forcing people to have to participate in abortions, and gender reassignment surgeries of children, and using the American taxpayer dollars to do those things. We believe that every American should be free to live and work according to their beliefs.”

One section of the Equality Act that pro-life advocates find concerning reads as follows:

“Pregnancy, childbirth, or related medical condition shall not receive less favorable treatment than other physical conditions.”

Some pro-life advocates are fearful that the use of the term, ‘related medical condition,’ is vague enough to include abortion.

Swatsworth says that she has seen broad support for the Equality Act from several organizations, including religious groups, even referencing a poll that estimates 83% of Americans favor laws that protect the LGBTQ community against discrimination.

“LGBTQ people are already our neighbors,” Swatsworth said. “They’re already attending churches and going to the grocery store. This legislation is really about protecting them in their daily lives, from discrimination and harassment.”

Grasz says he agrees that everybody should be treated with dignity and respect, but disagrees that the federal government should be the ones dictating those terms.

“This bill is a serious threat to life and religious freedom and faith,” Grasz said, “That’s why we’re opposed to the Equality Act.”

Senate majority leader Chuck Schumer reportedly plans to bring the Equality Act to the Senate floor this legislative session, where it would need 60 of 100 votes to pass.

Standing in the same location since 1857, the City Market is nearly as old as Kansas City itself. In the 1850s, over three hundred steamboats traveled on the Missouri River—including the Arabia before … END_OF_DOCUMENT_TOKEN_TO_BE_REPLACED

At 6 p.m. this Friday at the Kauffman Center, TEDxKC will have a lineup of ten speakers whose expertise range from a sky full of stars to the key to happiness to a MacArthur Genius. The theme is … END_OF_DOCUMENT_TOKEN_TO_BE_REPLACED

Mesoamericans called it food of the gods. From central Mexico down to Honduras, where the cacao tree grows native, ancient Olmecs, Mayans and Aztecs would gather the oblong fruit and break open its … END_OF_DOCUMENT_TOKEN_TO_BE_REPLACED

The definition of “comfort food” tends to vary depending on who you ask. At two new Brookside restaurants, Brady & Fox and Earl’s Premier, the term applies both to time-honored Irish recipes and East … END_OF_DOCUMENT_TOKEN_TO_BE_REPLACED

The King of Cass County’s bold vision for Harrisonville imploded. Can anyone revive it? It’s 5 pm on a Monday night in downtown Harrisonville. Only one other car is parked in the square. … END_OF_DOCUMENT_TOKEN_TO_BE_REPLACED