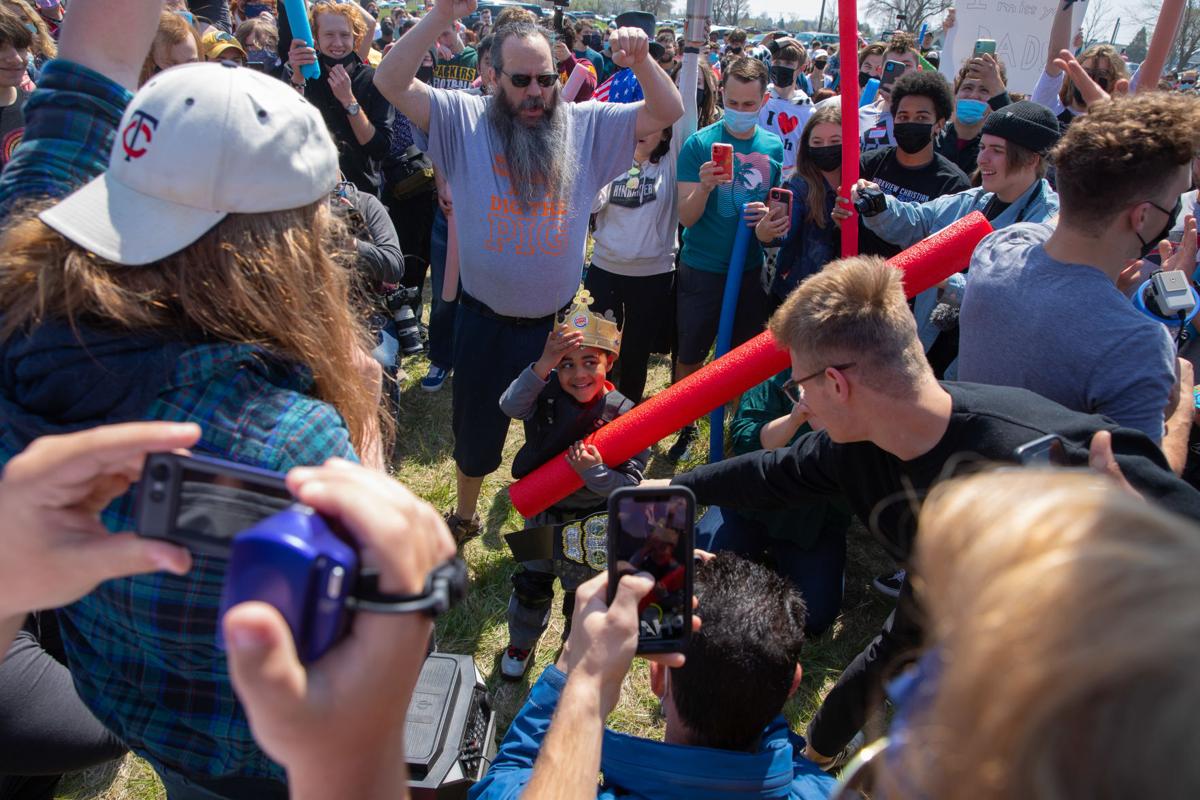 Lincoln 4-year-old Joshua Vinson Jr. is crowned the ultimate Josh on Saturday in Air Park. What started as a mid-pandemic joke came to life Saturday, as a mixed bag of individuals sharing only their name came to battle it out with pool noodles. 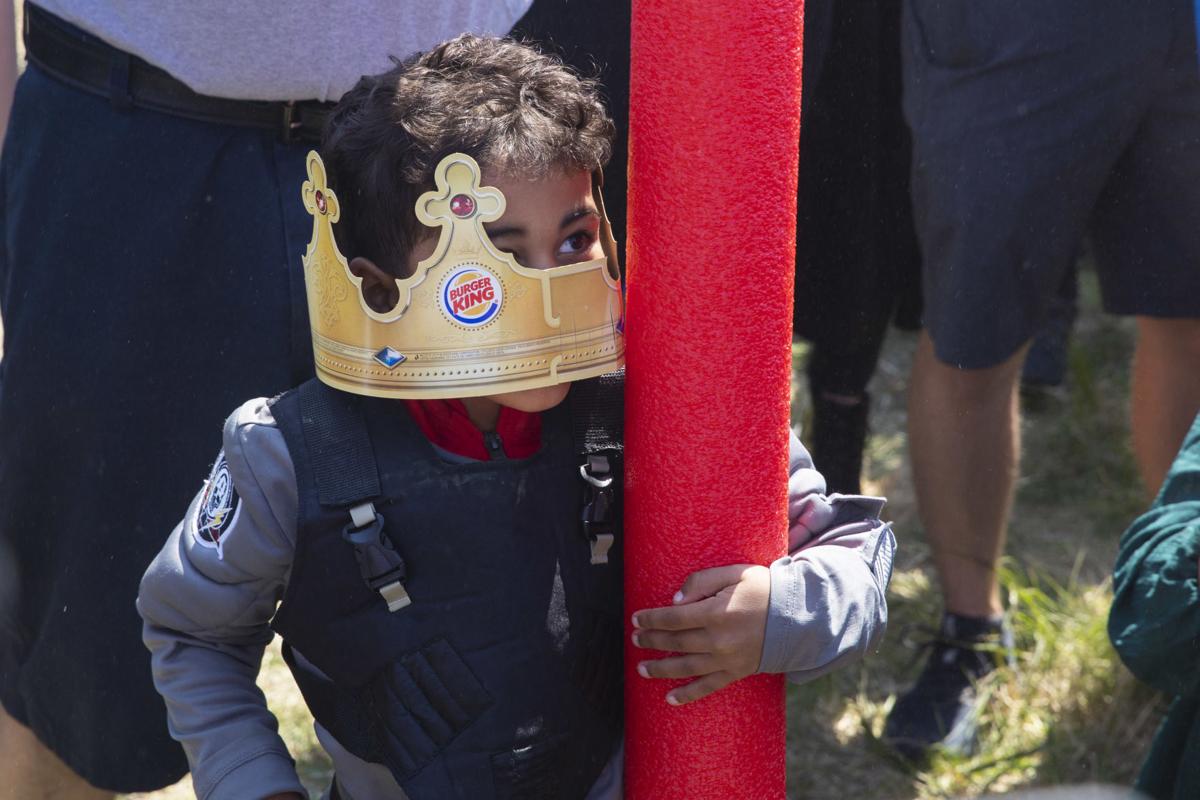 At 4 p.m., he had an interview with a radio station from St. Louis. That same day, a local TV station showed up at his house, wanting to learn more about him.

His older siblings’ teachers asked “Where’s Little Josh?” He walked around the mall in the same costume he wore at the now-famous Battle of the Joshes, and his fans recognized and high-fived him.

‘Little Josh’ dubbed winner of the Battle of the Joshes; community also benefits from event

The interview requests have been overwhelming, but Little Josh and his dad — Josh Vinson Sr. — are a good team to handle the attention, his dad said. And he believes the 4-year-old deserves it. He’s just a good kid.

“His personality is big, his heart is big, he cares for people,” Josh Sr. said. “He’s just an awesome kid.”

Little Josh is kind and a nurturing big brother to Rudy, often helping him walk around their house. He also has three older half-siblings: Cierra Vinson-Harris, Quintin Biaggio and Cora Biaggio.

His parents, Josh Sr. and Chrissy Biaggio, learned she was pregnant with him a week after Josh Sr.’s mother died. During that period of darkness, Little Josh was a light.

The world has also come to see Little Josh as a light, too — especially after a year of hardships caused by COVID-19. The Battle of the Joshes on Saturday drew people from across the country, raised more than $13,000 for the Children’s Hospital and Medical Center Foundation and donated nearly a ton of food to the Food Bank of Lincoln. And Little Josh’s victory seemed meant to be.

A couple of years ago, Children’s Hospital helped save his life. At 2 years old, Little Josh had fever-induced seizures. Josh Sr. was feeding his son when he started to seize. He put his son in his lap, drove to the emergency room in a panic.

Little Josh continued to have seizures, and the family received help from the Children’s Hospital staff and Boys Town medical professionals. His last seizure was Christmas Day in 2018.

Nowadays, Little Josh is a fun, charismatic and caring kid. He loves to play basketball and is a LeBron James fan. He also plays Fortnite and Bowser’s Fury on his Nintendo.

Calling all Josh Swains: The battle for your name is taking place right here in Lincoln

And he’s been handling the attention like a champ, his dad says. He is comfortable being himself around people and his father believes he’s been humble about his victory.

Since Saturday, his parents opened an Instagram account called @little_josh2021, where they post pictures of him and artwork created by fans. His parents are thankful for everyone who is cheering on their son and for the event itself.

“It just shows how wonderful people are,” mother Chrissy said of Saturday’s event. “It’s exactly what the world needed right now. To see some happiness.”

It’s funny that Josh Sr. didn’t always like his first name. He named his son Josh only because he and his brothers promised each other to name their first-born sons after themselves as an homage to their Louisiana roots. In the South, he said, it’s common to name a son after the father.

The name is also helping set up Little Josh’s future.

Nolan Schroeder, a college student in California, started a GoFundMe to raise money for Little Josh’s education. As of Tuesday, it had raised $710.

The interviews and attention may be overwhelming, but his parents are thrilled to receive the support. Little Josh already had good influences, like his grandparents and other friends and family, in his life. But now people across the world are rallying behind him to ensure he’s successful.

“It feels great. It feels amazing that everybody’s cheering on my son and wanting the best for him,” said Josh Sr. “(The event) just showed us that we can all get together and do fun things like that. It’s just amazing to have it be my son, that my son can have this impact on the world.”

Photos: Hundreds battle with pool noodles for the name Josh

Shanita McAfee-Bryant knows the recipe for success. From creating new recipes within her family’s kitchen to winning Cutthroat Kitchen, a popular Food Network game show, McAfee-Bryant looks to use her … END_OF_DOCUMENT_TOKEN_TO_BE_REPLACED

For forty years, the low-slung but striking Vine Street stone buildings on the periphery of Kansas City’s historic Jazz District have sat vacant, boarded up, surrounded by a chain-link fence and … END_OF_DOCUMENT_TOKEN_TO_BE_REPLACED

Illustration by Makalah Hardy. As the name implies, hot pots are hot. How hot? My server can’t tell the exact temperature of the rich broth tossing dried chiles around at a rolling boil on the … END_OF_DOCUMENT_TOKEN_TO_BE_REPLACED

André’s has been making quiche since 1955, and not originally by choice. “The concept that my grandparents came over here from Switzerland with was exclusively pastries and chocolates—1955 Kansas City … END_OF_DOCUMENT_TOKEN_TO_BE_REPLACED

Rain or shine, something Kansas Citians have been able to count on for the last thirty years is turning to KSHB 41 News and watching chief meteorologist Gary Lezak tell them what to expect. But with … END_OF_DOCUMENT_TOKEN_TO_BE_REPLACED