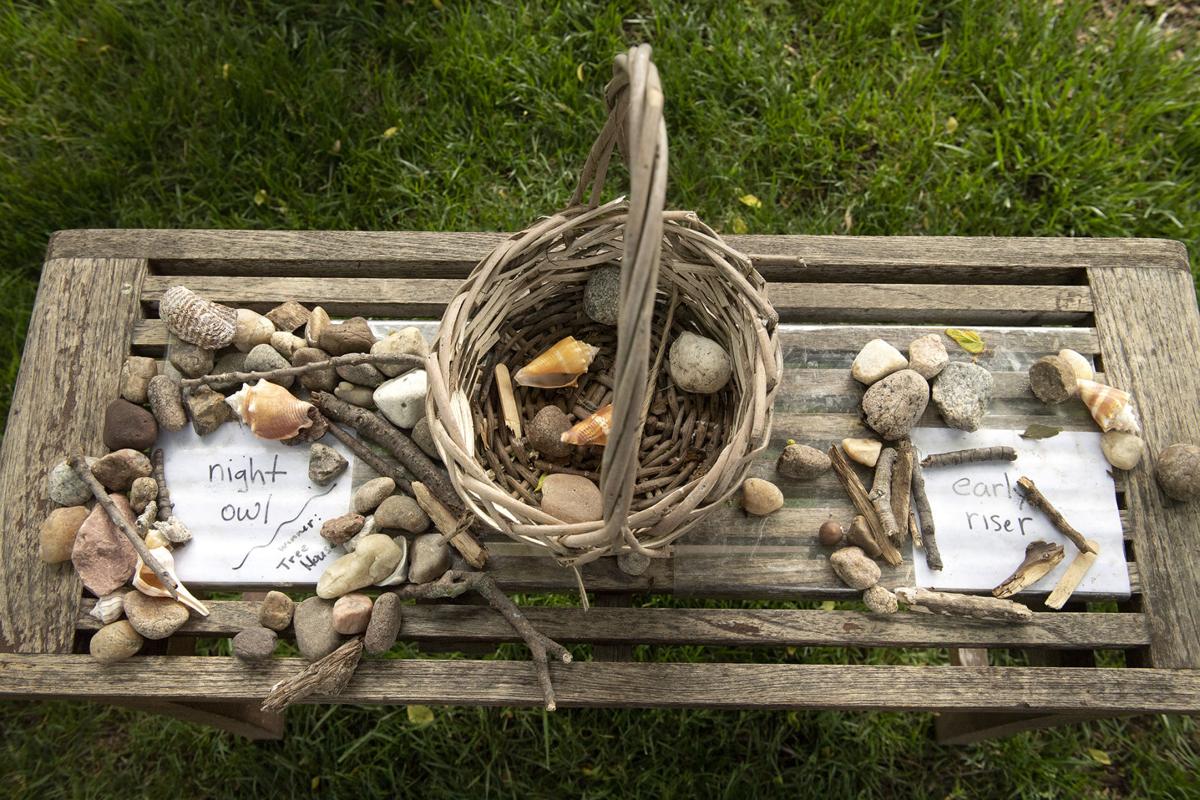 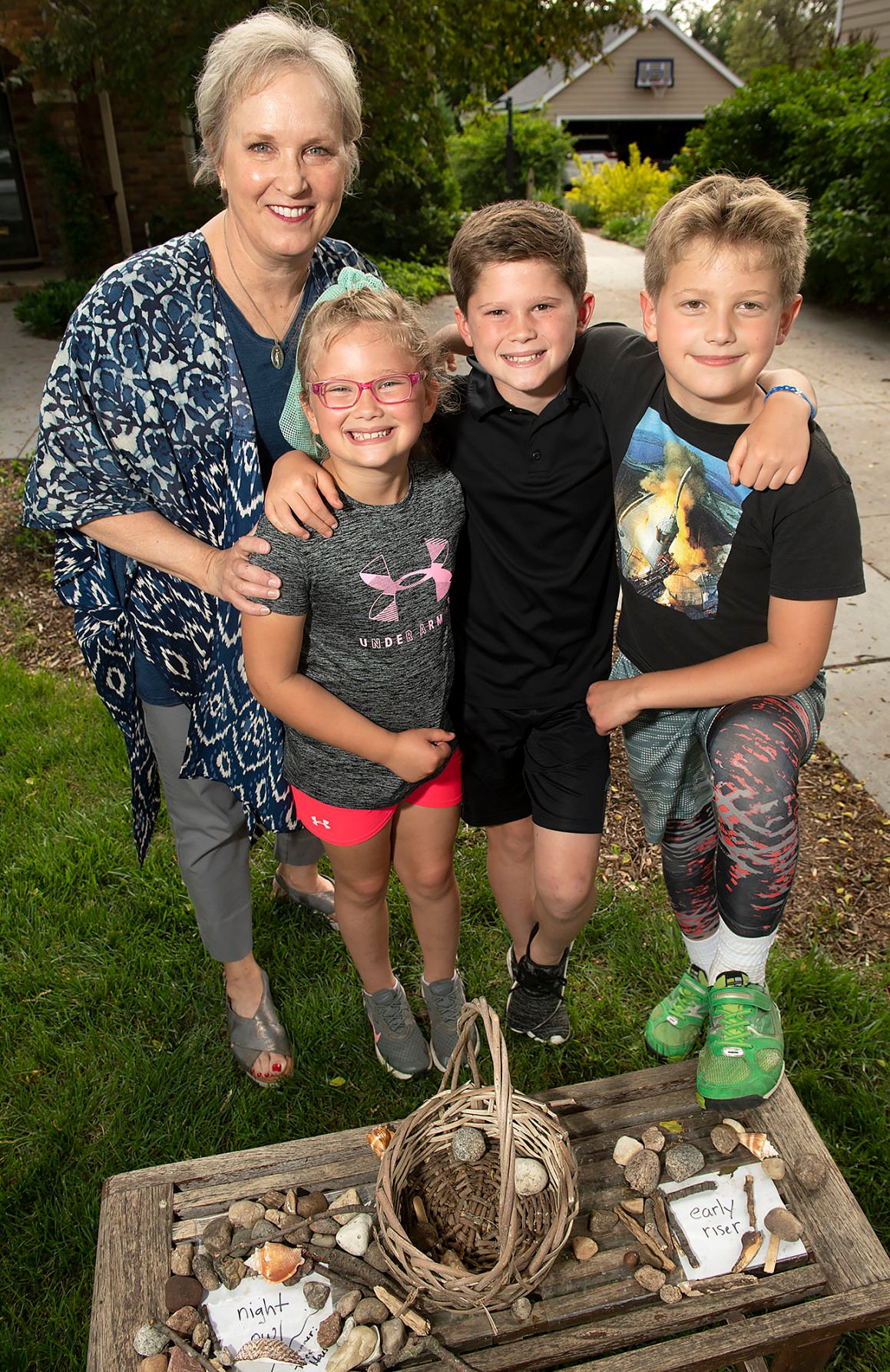 Mary Beth Rice (left) set up a voting bench last fall along Sheridan Boulevard, asking passersby to weigh in on just about everything. Now, her neighbors –siblings Margot, 8; Linus, 11; and Oscar Swanson, 9 — pitch in on the project.

The politics-free polling place showed up on Sheridan Boulevard on the first Tuesday in November.

A small wooden bench with a stone-filled basket in the middle, a slip of paper on either side.

Apple cider lovers to the left.

Hot chocolate fans to the right.

Grab a rock, cast your vote.

People were walking that wide boulevard in record numbers during the pandemic months, eager to be outside and unmasked.

They strolled all summer.

They walked as fall arrived and cold crept in and COVID-19 cases started rising. They were walking when Mary Beth Rice set up her polling place.

The idea came from a friend in Indiana, who sent her a photo of a similar setup there, Rice said Wednesday.

She liked the idea.

And when she spotted a bench in her old neighborhood — set out for the garbage truck — she went into action.

“Everyone was so tense and upset and scared, no matter what side they were on, I thought, I’ll just put it out.”

A lighthearted way to express an opinion, she said.

Something fun. Something that might build community, the way it had in her friend’s Indiana town.

Something that connected people in a time when it was hard to be connected.

And it’s something that’s stuck around long past Biden vs. Trump.

Cindy Lange-Kubick: Ripping off the masks and what comes after

The inaugural election on Sheridan Boulevard went on without dispute. And Rice’s Facebook friends cast their votes, too, like a mail-in ballot without a stamp.

Hot chocolate won, 2 to 1. Next came Batman vs. Superman with a write-in for Wonder Woman. (Batman by a dozen.)

The next week, Reese’s Peanut Butter Cups ran away from M&M’s. Mashed potatoes beat out green bean casserole at Thanksgiving.

Winter came and with it snowmen vs. snow angels and “Elf” vs. “Polar Express” and pancakes vs. waffles. (Snowmen, “Elf” and pancakes.)

The neighbors started calling it the Voting Bench.

And they voted, rock by rock. (And when the rocks ran dry, they cast ballots via acorns, mulch, twig, seashell.)

The mailman was known to cast a vote. The FedEx driver. The UPS guy.

All those early-morning and late-evening walkers. Little kids like Linus, Oscar and Margot Swanson from next door.

“It was like this COVID ray of sunshine,” said their mom, Roxane Swanson. “It just became this phenomenon.”

Something fun in a year when fun got the short end of the stick.

Swanson calls Rice the neighborhood Martha Stewart. (Caveat: She’s Martha with the heart of Mary, a faith-filled and compassionate Catholic.)

She’s creative. Always looking for ways to include people in her endeavors.

Rice is a communications consultant and a retreat facilitator. She’s an author and a blogger. She grows flowers for butterflies and for beauty. She’s a baker and a bike rider. She tells funny stories. She’s a five-year cancer survivor who’s raised four great kids. She sends emails with great quotes stuck at the bottom.

Every winter, she sticks a couple of small snowballs in the freezer, and in July, she throws an ice cream social with a snowman centerpiece and raises money for Willie’s Underwear Project. (All the donations go toward undergarments and clothes for school nurses to stash away for kids in need.)

For years, she organized the neighborhood Easter egg hunt. (Now she just plays the part of the Easter Fairy, looking for sad kids who didn’t find enough eggs.)

Cindy Lange-Kubick: Son clutches Dad’s red pillow to his heart and wears a scar to match

When she hears about a great idea, she thinks of a way to make it happen.

The Voting Bench has been around for more than six months.

Tulips took down daffodils in a landslide.

Tuesday night tacos and Friday night pizza were a tossup.

Rice isn’t sure how long the tradition will last: “It’s kind of like Zoom and masks. Are they going to go away completely?”

For now, voter apathy doesn’t appear to be an issue.

The candidates change on a random basis. When the basket is empty and people have to resort to mulch, Rice closes the poll and starts a new one.

Hammocks vs. porch swings. Joggers vs. sprinters. Sunrise vs. sunset.

Cindy Lange-Kubick: Catching up with corgis with law degrees, shots in arms, boring photos and other Lincoln stories

Rice has started compiling a list for summer — frogs vs. toads, tiki torches vs. twinkly lights — and she continues to collect suggestions from the Swanson kids and Facebook friends.

The woman behind the pandemic project seems to know how she’d vote.

“I just think it’s a little bit of joy amidst some of the heartache and struggle in the world,” Rice says. “So why not?”

{{featured_button_text}} A woman points to the stage during the third song of Whiskey Myers' opening act Friday at Pinewood Bowl. Jamey Johnson was the headliner for the concert, … END_OF_DOCUMENT_TOKEN_TO_BE_REPLACED

{{featured_button_text}} Greg Adams, executive director of the Nebraska Community College Association, will retire at the end of the year after five years in the position. Adams, a former … END_OF_DOCUMENT_TOKEN_TO_BE_REPLACED

KANSAS CITY, Mo. — The temperatures won’t be the only reason Kansas City’s entertainment scene is heating up. On Friday night, Grinders in the Crossroads hosted its first concert since 2019. “People … END_OF_DOCUMENT_TOKEN_TO_BE_REPLACED