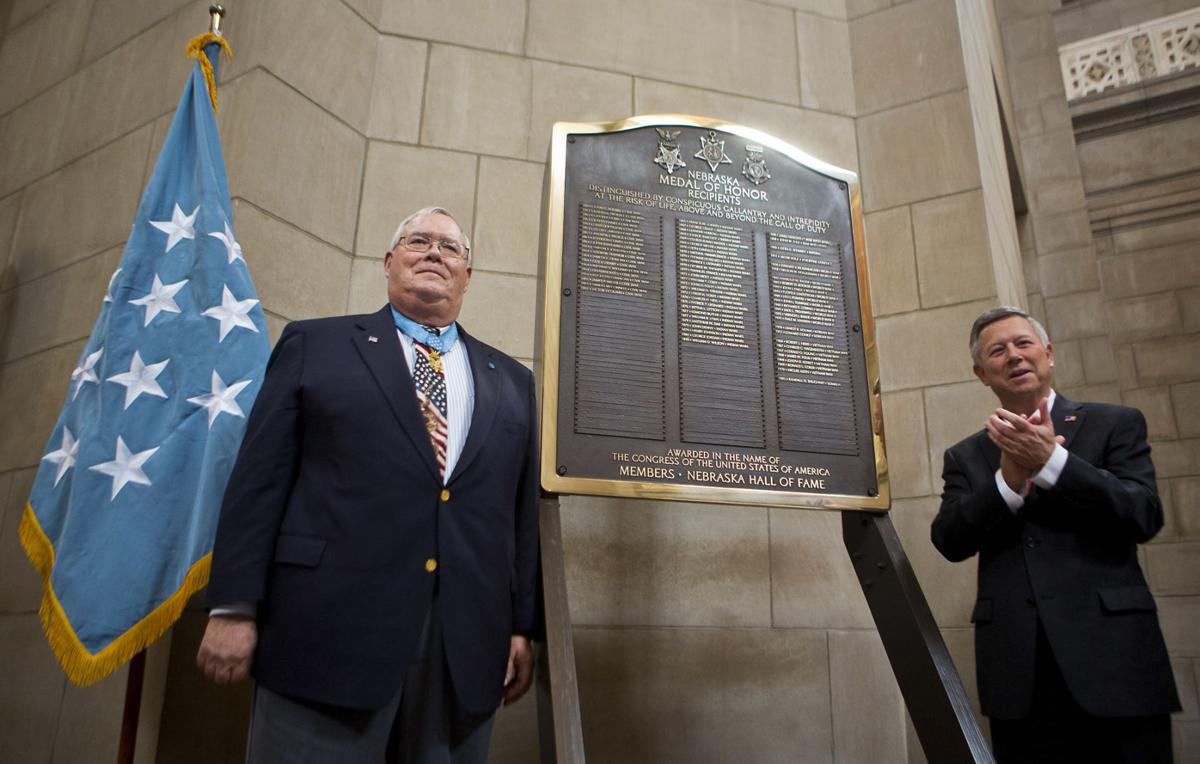 Charles Hagemeister and Nebraska Gov. Dave Heineman unveil a plaque recognizing the 72 Nebraskans who have received the Medal of Honor in 2013. 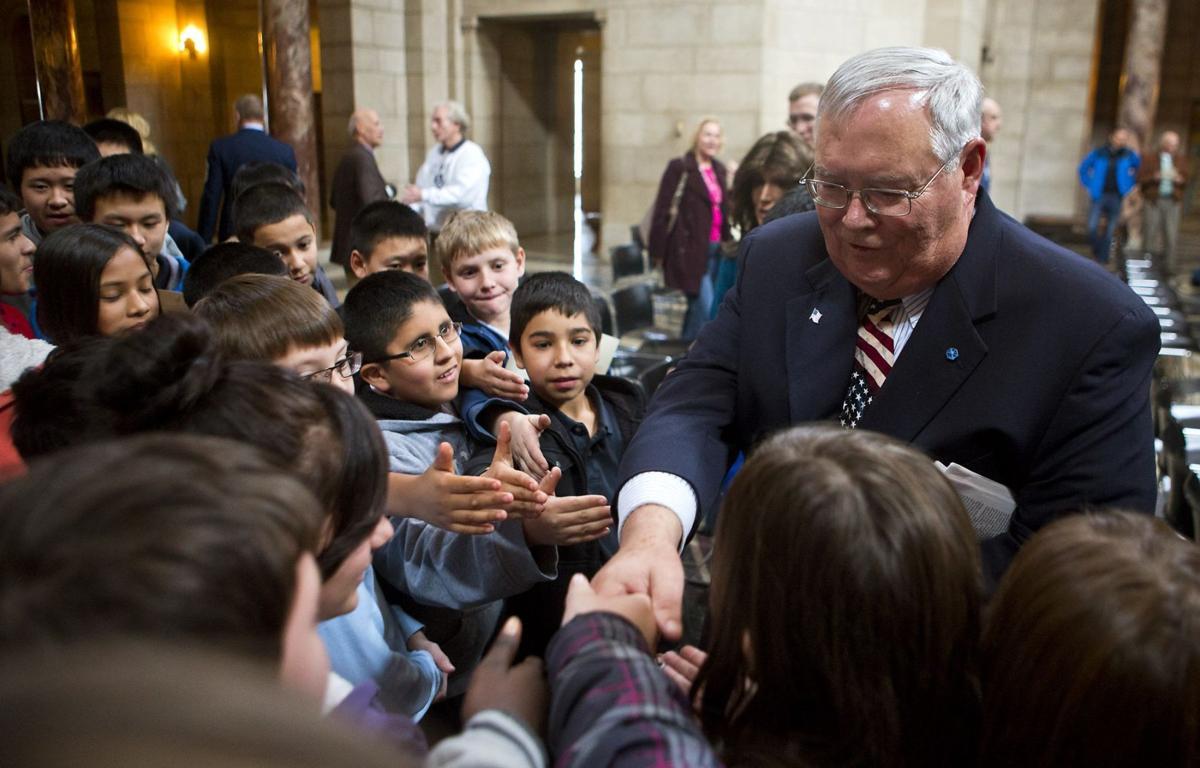 Retired Lt. Col. Charles Hagemeister shakes hands with students at the Nebraska Capitol in 2013 after the dedication of a plaque honoring Nebraska’s Medal of Honor recipients.

Charles C. Hagemeister, a Nebraska-born Army medic who was decorated with the Medal of Honor during the Vietnam War for dashing through enemy fire multiple times to save the lives of wounded soldiers, has died in Leavenworth, Kansas. He was 74.

Born in Lincoln in 1946, Hagemeister was the youngest of four children and graduated from Lincoln Southeast High School. He quit the University of Nebraska-Lincoln after a year of school and was working in a warehouse when he was drafted into the Army in 1966.

Hagemeister, then a specialist fourth class, served as a medic with the 1st Battalion, 5th Cavalry Regiment of the 1st Cavalry Division (Airmobile).

The battalion was operating in Vietnam’s Binh Dinh province on March 20, 1967, when his platoon was surrounded on three sides in a graveyard and attacked by North Vietnamese troops, according to the Congressional Medal of Honor Society.

Two soldiers went down immediately. Hagemeister raced through heavy fire to treat them. He looked around and realized that he would have to lead because the platoon leader was dead and most of the rest were either killed or wounded.

He was unable to call in air support because of the close-quarters fighting, or evacuate the wounded. For hours, and under heavy fire, Hagemeister moved among the platoon’s defensive positions, treating soldiers and rallying the survivors.

At nightfall, a sniper took aim at him and several other members of his unit. Medics typically don’t carry rifles, so Hagemeister grabbed one from a fallen soldier and shot the sniper. He also killed three other enemy soldiers who were silhouetted against a burning village as they tried to outflank him — and then took out a machine-gun nest, too.

Still pinned down, Hagemeister again braved heavy fire and ran to get help from another platoon. He led them back, then worked to evacuate the wounded.

“Hagemeister’s repeated heroic and selfless actions at the risk of his life saved the lives of many of his comrades and inspired their actions in repelling the enemy assault,” his Medal of Honor citation said.

Hagemeister traveled to Washington to receive the medal — the nation’s highest award for military valor — from President Lyndon Johnson on May 14, 1968.

According to the 2003 book “Medal of Honor,” by Nick Del Calzo and Peter Collier, Johnson asked Hagemeister during the ceremony how much longer he had left in the service.

Johnson turned to a senior officer standing nearby and said, “I want you to talk to this young man after we’re done here and change his mind.”

The president’s gambit worked. Hagemeister reenlisted and made the Army a career. He later became an officer and retired as a lieutenant colonel in 1990.

After his Army career, Hagemeister worked as an instructor at the Army Command and General Staff College at Fort Leavenworth, Kansas, and as a defense contractor who trained soldiers using large-scale computer simulations. He served on the board of directors of the Congressional Medal of Honor Society.

Although he lived in Kansas, Hagemeister maintained ties with his home state. In 2013, he visited Lincoln for the dedication of a plaque in the State Capitol’s 14th-floor chamber honoring the 72 Nebraskans who have received the Medal of Honor.

During a 1988 visit to his high school alma mater, he answered questions about his life and military service. He downplayed his heroic acts on that day in Vietnam, more than 20 years earlier.

“The first reaction was for survival,” Hagemeister told the students. “Then it became doing my job as a medical corpsman and getting people out alive. It was a very scary episode.”

97 years after his mother’s birth, son says her world ‘seemed more like fiction than fact’

Hagemeister is survived by his wife, Barbara; two children; and two grandchildren. A funeral service will be held 11 a.m. Wednesday at Sacred Heart Catholic Church in Leavenworth, with burial at 1:30 p.m. at Leavenworth National Cemetery.

Hagemeister’s death leaves 66 living Medal of Honor recipients, according to the Congressional Medal of Honor Society. Former Gov. and Sen. Bob Kerrey is the only one left from Nebraska.

Remember Social Distortion? In the mid-’90s, the post-punk band had a monster hit with “I Was Wrong,” a muscular, grunge anthem about the sheer, cathartic joy of admitting your mistakes. After seeing … END_OF_DOCUMENT_TOKEN_TO_BE_REPLACED

When Pam Besheer eyed this vintage Tudor-style house on Zillow, she had a strong inkling it would be exactly what she and her husband, Jay, had been looking for. Set back from the street and close … END_OF_DOCUMENT_TOKEN_TO_BE_REPLACED

This Overland Park home’s kitchen will make you lose your marbles—or, rather, make you want to cover your own kitchen in marble. The space, which was nominated for the 2022 HGTV Designer of the Year … END_OF_DOCUMENT_TOKEN_TO_BE_REPLACED

Here are fifteen great things to do in Kansas City this weekend, December 8-11, including Pretty Woman: The Musical, Kansas City Ballet’s The Nutcracker, and The 1975 in concert. The Piano … END_OF_DOCUMENT_TOKEN_TO_BE_REPLACED