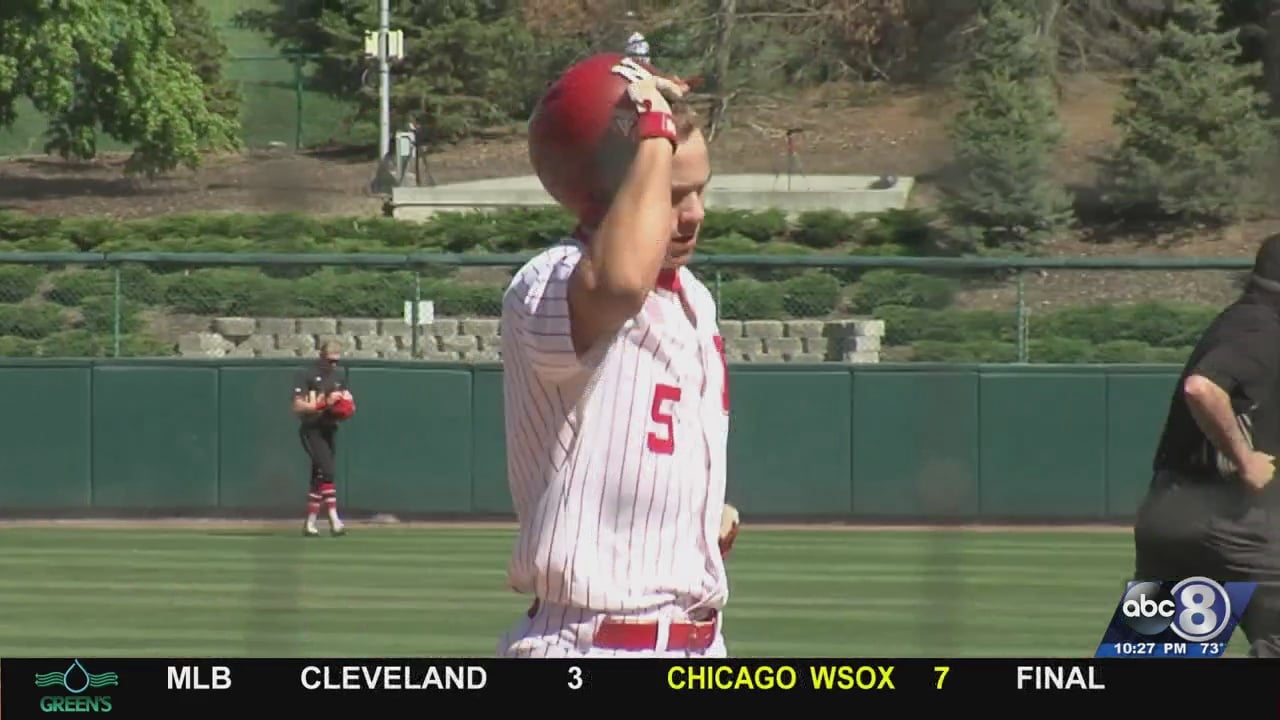 For the second straight day the #22 Nebraska baseball saw a late-game lead disappear as the Rutgers Scarlet Knights scored five runs over the final three innings on its way to a 6-5 victory.

Lincoln (Nebraska Athletics) – For the second straight day the #22 Nebraska baseball saw a late-game lead disappear as the Rutgers Scarlet Knights scored five runs over the final three innings on its way to a 6-5 victory. Nebraska has now lost its first series of the season after starting the year with a program-record seven straight series wins.

The Huskers held a slim 3-2 lead after the seventh inning on Friday night before falling, 9-4. In today’s contest Nebraska jumped out to a 5-0 lead after the fourth inning before Rutgers scored the game’s final six runs, including three runs in the seventh on a pair of home runs.

The teams combined for five home runs on the day, including Husker homers from Joe Acker, Luke Roskam and Spencer Schwellenbach. Roskam account for three of NU’s nine hits on the afternoon.

Rutgers got multi-hit performances from four players, including a 3-for-5 afternoon from leadoff man Mike Nyisztor. The Huskers knocked out starter Ben Wereski after 3.2 innings before three relievers combined to throw 5.1 inning of shutout relief.

Schwellenbach was tagged with the loss, his first of the season, after allowing two runs on five hits over 2.2 innings. The right hander had been flawless over his first nine appearances of the season, as he hadn’t allowed a run over 14.0 innings.

Chance Hroch delivered a quality start, allowing one run on five hits over 6.0 innings, his third straight start where he’s given NU at least 6.0 innings. Outside of an extended fifth inning, Hroch faced four batters or less in five of his six innings, including three batters three times. Hroch left the game with a 5-1 lead, but did not factor into the decision.

After Hroch hung a zero to start the game Acker led off the bottom of the first with his second home run of the series. Acker hit an inside-the park home run in Friday’s series opener and followed it up with a no doubter on Saturday, as he launched a 2-1 offering over the center-field wall to give the Huskers a 1-0 lead.

Hroch retired the Scarlet Knights in order in the second, including two strikeouts, and then his offense added to the lead. With one out Roskam notched his fifth homer of the season, hitting an opposite-field solo shot to left field. Gunner Hellstrom then reached on an error, Jack Steil was hit-by-pitch and Acker walked to load the bases. Jaxon Hallmark delivered a RBI single to center field, but was robbed of a second RBI when Ryan Lasko cut down Steil at the plate. Wereski got a pop out to end the inning, but Nebraska had added two runs in the inning, increasing its lead to 3-0.

FolloWing a scoreless third from both teams, Hroch retired RU’s 2-3-4 hitters in order in the top of the fourth. The Huskers offense then tacked on two more runs with its third home run of the game. Acker got the offense going with a one-out double and two batters later Schwellenbach hit a two-run blast to left-center field. Schwellenbach’s fourth homer of the season pushed NU’s lead to 5-0 and knocked Wereski out of the game. Max Anderson welcomed reliever Justin Sinibaldi with a single and Cam Chick walked before Sinibaldi got an inning-ending ground out.

Rutgers got on the board in the fifth and were in position for a big inning, but Hroch worked out of a jam. Hroch started the inning with his fourth strikeout of the game, but then gave up a single and a RBI double, cutting NU’s lead to 5-1. A dropped pop up by Steil put two runners on and then Hroch got another pop up for the second out of the inning. The lineup rolled over and Nyisztor reached on an infield single to load the bases. Hroch execute and left them loaded with a 6-3 groundout.

Following 6.0 strong innings from Hroch the Huskers turned the ball over to the bullpen in the seventh and Rutgers got back into the game. Braxton Bragg walked the first batter he faced and then got a pop up before pinch-hitter Josh Rodriguez blasted a 1-0 offering down the left-field line for a two-run homer. Three pitches later Nyisztor notched his first home of the season and NU’s lead was down to one, 5-4. The Huskers went to Schwellenbach, who gave up a soft single to right and then got an inning-ending 4-6-3 double play.

Efry Cervantes worked a leadoff walk in the bottom of the seventh, but reliever Parker Scott came back with a pair of strikeouts and a ground out.

Schwellenbach retired the leadoff hitter in the top of the eight before Chris Brito worked a walk. Rutgers took advantage of the free pass with a consecutive singles, including a RBI single from Kevin Welsh that tied the game at 5-5. With the go-ahead run in scoring position Schwellenbach kept the game tied with a strikeout and a line out.

After ending the top of the eighth on the mound, Schwellenbach led off the bottom of the frame and worked a leadoff walk. Scott quickly cleared the bases with a 6-4-3 double play and then got a fly out to send the game to the ninth tied, 5-5.

Facing the top of the lineup in the ninth, Schwellenbach gave up a leadoff single to Nyisztor and then a sacrifice bunt put him in scoring position. A pop out put two outs on the board but NU couldn’t get out of the inning with the score tied, as Evan Sleight delivered a two-out RBI single the scored the eventual-game winning run.

The Huskers had their leadoff man on for the third straight inning in the bottom of the ninth when Mojo Hagge led off with a single and moved to second on a throwing error. Roskam then hit a ball to the right side the put Hagge at third base with one down. With the tying run just 90 feet from home, Nate McLain notched his third save of the season with a line out and a fly out.

The Huskers will try to avoid a series sweep tomorrow, with the teams meeting at Noon.

Continental Siding's Alec Cook and Jerry O'Neal in the spot voted Best TV Commercial in KC When an owner is the face of his company, it’s hard to replace him in marketing after he … END_OF_DOCUMENT_TOKEN_TO_BE_REPLACED

Posted on August 19, 2022 The City of Overland Park is launching a new incentive to ensure snow crews are prepared to keep City streets safe this winter. During the 2022-2023 … END_OF_DOCUMENT_TOKEN_TO_BE_REPLACED

Continental Siding's Alec Cook and Jerry O'Neal in the spot voted Best TV Commercial in KC When an owner is the face of his company, it’s hard to replace him in marketing after he … END_OF_DOCUMENT_TOKEN_TO_BE_REPLACED

Posted on August 16, 2022 As the City Council continues to consider the 2023 Budget, you have two upcoming opportunities to weigh in on the budget.  In addition to the … END_OF_DOCUMENT_TOKEN_TO_BE_REPLACED