TOPEKA, Kansas — Republicans in the Kansas Senate weathered the initial arrest of their majority leader for drunken driving, but they booted him from leadership Friday after details of his arrest painted a picture of dangerous belligerence.

Senate Republicans met after finishing their work and voted in a closed-door meeting to remove Majority Leader Gene Suellentrop of Wichita from the job. Suellentrop did not attend the meeting or issue a statement. He will keep his seat in the Senate.

Three senators from Shawnee County, where the arrest happened, said the new details about Suellentrop’s level of intoxication — taunting a highway patrol officer after nearly colliding head-on with vehicles on an interstate — marked the tipping point.

“That is when we decided we needed to step forward and do something,” Republican Sen. Rick Kloos said after the meeting.

The Kansas Highway Patrol arrested Suellentrop in the early hours of March 16 for allegedly driving drunk and speeding the wrong way on Interstate 70 in Topeka. 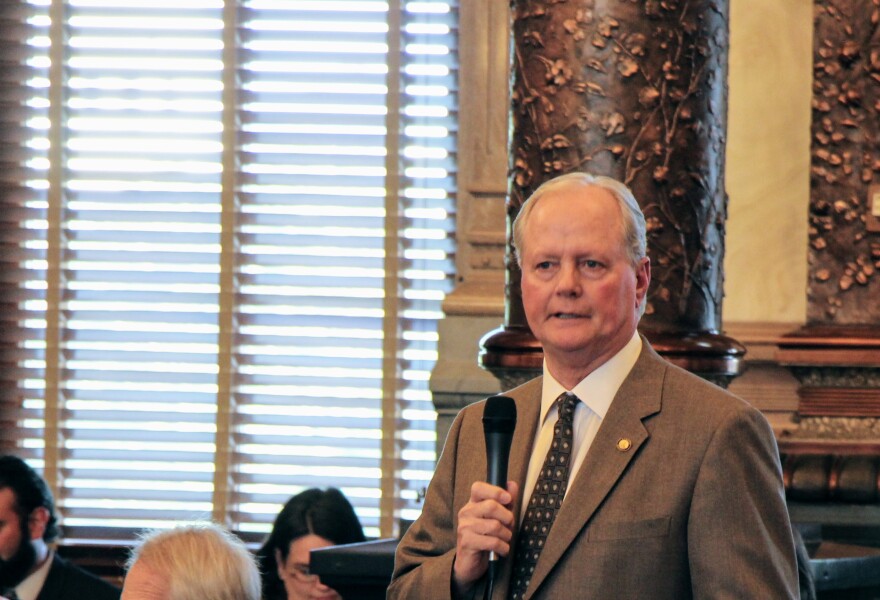 This week, a highway patrol officer’s affidavit described cars swerving and then barely avoiding catastrophe on the highway. The statement said Suellentrop raced to avoid police and later called the officer “donut boy” and said he could “take” the officer in a fight.

“We have high standards for the values we should hold,” Republican Sen. Kristen O’Shea said following the GOP caucus vote. “As a party tonight, we showed that we’re holding accountability to that.”

Republican Senate President Ty Masterson said he is close to Suellentrop and had urged him to resign the leadership job, but that didn’t happen.

“These are just heavy issues,” Masterson said. “We become friends with people in these chambers.”

The Senate has ways to remove a member, but Masterson said that wasn’t the best choice.

“The chamber has no business determining who represents this district,” Masterson said. “We think that’s best left to the people who elected him.”

Suellentrop had already given up his formal duties in the Senate, but had maintained his position as one of the most powerful lawmakers in Kansas. Assistant Majority Leader Larry Alley will act as the leader until the caucus holds an election in May.

It was the first year for Suellentrop in the leadership job. The majority leader is a powerful position responsible for scheduling floor debates and leading the Republican caucus.

The Kansas Highway Patrol arrested Suellentrop after the pursuit. A few hours later, a judge released him. The judge said there were problems with the arrest report, but the county prosecutor later re-filed charges for evading police, driving drunk, reckless driving and traffic violations.

That affidavit also said Suellentrop’s blood alcohol test registered at 0.17, more than twice the legal limit for driving in Kansas.

Stephen Koranda is the Statehouse reporter and news editor for the Kansas News Service. You can follow him on Twitter @Stephen_Koranda.

February is short but sweet. This month, we share our picks for the city’s best bonbons and a lot of other unique sweets that are baked, dipped and drizzled to perfection. By Dawnya Bartsch, Martin … END_OF_DOCUMENT_TOKEN_TO_BE_REPLACED

Photo by Caleb Condit and Rebecca Norden It’s Valentine’s Day month, but fancy chocolate deserves to be enjoyed year-round. We visited chocolatiers around the … END_OF_DOCUMENT_TOKEN_TO_BE_REPLACED

Posted on December 1, 2022 Overland Park now has more access to information about its Police Department than ever, thanks to a library of online transparency-focused … END_OF_DOCUMENT_TOKEN_TO_BE_REPLACED

The annual Beard Awards semifinalists nominations were just released and Kansas City’s food and drink scene has something to celebrate. The KC area has seven semifinalists by our count, including two … END_OF_DOCUMENT_TOKEN_TO_BE_REPLACED