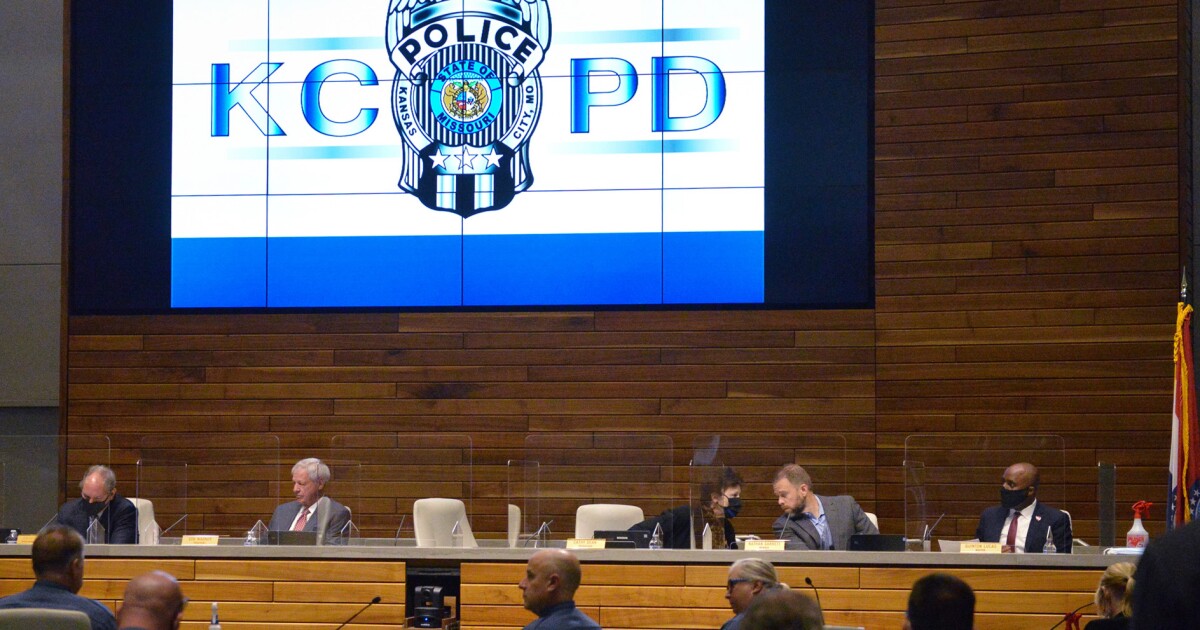 The Kansas City Board of Police Commissioners has voted to seek legal redress against a plan by one of its own members who is trying to get more local control of the police department and move away from state hands.

On Monday night, the board voted 3-1 to seek a potential lawsuit to fight Mayor Quinton Lucas’ plan to reallocate the police budget and spend about one-fifth of it on social services like crime prevention and conflict resolution programs. Lucas was the lone vote against the board’s plan.

But while Lucas faces potential blocks from the police board, state Republicans and Northland city council members over his new plan, civil rights leaders and activists are praising the move.

Police board to explore a lawsuit against the city

Since 1939, KCPD has been overseen by a five-memberBoard of Police Commissioners, made up of the mayor and four gubernatorial appointees. Lucas pushed his plan through city council last week and has since gotten pushback from Northland council members and state Republicans lawmakers, who want a special session to override Lucas’s action.

The board’s vote was taken Monday night during a closed meeting. Lucas noted that in a tweet sent Tuesday, referring to criticism that he pushed his own plan through in “secret,” when it was debated by full council during a televised meeting last Thursday.

Fascinating to hear about so-called “secret” meetings that are held in public, televised, and end with a public vote, then hear the same critics not say a word about a secret police board meeting of unelected folks deciding who knows what about our city’s future.

“Fascinating to hear about so-called ‘secret’ meetings that are held in public, televised, and end with a public vote, then hear the same critics not say a word about a secret police board meeting of unelected folks deciding who knows what about our city’s future,” Lucas wrote in a tweet.

Board member Nathan Garrett, a Kansas City-based attorney, said in an email that the board would have preferred to discuss the matter before the “surprise announcement” of Lucas’ plan.

“But once those ordinances passed, the fuse was lit and we are in a time-crunch to address swiftly lest we are unable to fund Department operations,” Garrett said.

Garrett said the situation is rapidly evolving, but the board will have more to share in the coming days.

At a press conference Tuesday, Lucas said he was disappointed by the “number of lies” he has heard in recent days.

“The suggestion that even though there’s a $200 million budget available, people saying that one day it was 400 officers laid off, the next day it was 450. Others have said they can’t make payroll in a week. And where is that even coming from?” Lucas said.

Lucas said he didn’t think the situation needed to resort to legal action, but if the board elects to proceed with a lawsuit, the city will be ready to defend its claims.

A coalition of civil rights groups met at the steps of City Hall on Tuesday afternoon to speak in support of Lucas and other council members who voted to reallocate the budget.

Gwendolyn Grant, president of the Urban League of Greater Kansas City, said the board’s decision to vote during a closed session is why the city needs local control of the police department.

“We need equality, we need safe communities. We need equity and representation, and we get none of that right now without local control. So, this is a move to say that we are going to exercise the power of the purse,” Grant said.

Other organizations hoped the new ordinances would be a step in the right direction in tackling the city’s growing crime rate.

“When city crime is at its highest and KCPD solve rate and crime prevention is at its lowest, it makes no sense to continue to increase their budget,” said Talib Muwwakkil, chair of the National Black United Front Chapter, Kansas City chapter.

On Monday, state Republicans also took aim at Lucas’ plan, calling it “defunding the police” and promising to upend it. At least one Kansas City-area Republican said he has asked the governor for a special session in hopes of swatting the plan down. Rep. Doug Richey, of Excelsior Springs, said the way Lucas pushed through the plan was “immature governance.”

Lucas’s plan calls for taking about $42 million from the Kansas City Police Department budget and putting it in a separate fund that would give the mayor and council more say in how the money is spent. That $42 million is roughly 20 percent of the city’s general revenues, a formula required by state law.

Richey said he and state Sen. Tony Luetkemeyer, a Parkville Republican, are planning on introducing legislation next January that would increase the percentage of the city’s general revenues that must be spent on the police. Current state law set that at 20 percent, which is what Lucas wants to return to. Now, Kansas City spends a little over 25 percent of general revenues on the police budget.

At 6 p.m. this Friday at the Kauffman Center, TEDxKC will have a lineup of ten speakers whose expertise range from a sky full of stars to the key to happiness to a MacArthur Genius. The theme is … END_OF_DOCUMENT_TOKEN_TO_BE_REPLACED

Mesoamericans called it food of the gods. From central Mexico down to Honduras, where the cacao tree grows native, ancient Olmecs, Mayans and Aztecs would gather the oblong fruit and break open its … END_OF_DOCUMENT_TOKEN_TO_BE_REPLACED

The definition of “comfort food” tends to vary depending on who you ask. At two new Brookside restaurants, Brady & Fox and Earl’s Premier, the term applies both to time-honored Irish recipes and East … END_OF_DOCUMENT_TOKEN_TO_BE_REPLACED

The King of Cass County’s bold vision for Harrisonville imploded. Can anyone revive it? It’s 5 pm on a Monday night in downtown Harrisonville. Only one other car is parked in the square. … END_OF_DOCUMENT_TOKEN_TO_BE_REPLACED

She says in her long life, the only constant is change, and she knows important changes are coming in Kansas. She’s faced battles/discrimination and stood up for LGBT+ rights throughout her life, and … END_OF_DOCUMENT_TOKEN_TO_BE_REPLACED